There are 14 Relics to find in God of War Ragnarok. On this page of our guide, we show the locations of all relics and hilts, as well as explain how and where to get the components needed to forge these items in the dwarven store. Moreover, we inform what uses the relics have, how to upgrade them, and how to use them in combat.

Relics are a new introduction to the GoW Reboot series - Kratos can equip them. There are 14 different relics in GoW Ragnarok, and each of these items has unique powers that are used in battle. 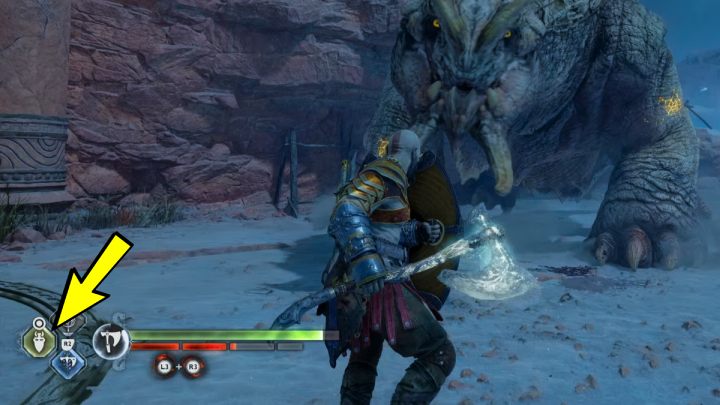 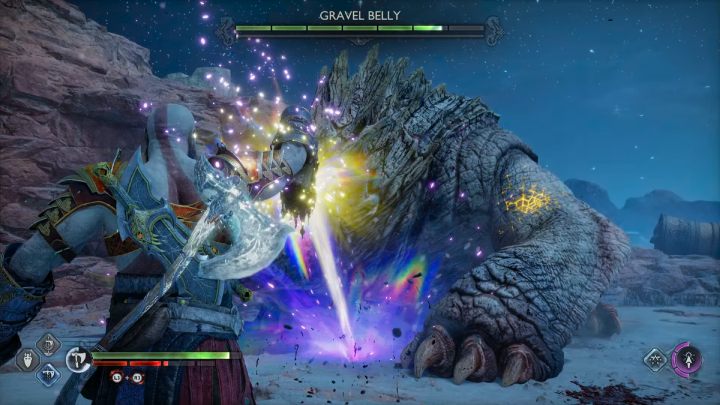 An equipped relic can be activated by pressing the shield and assigned relic buttons. Same as runic attacks, relics powers have a long cooldown. Almost all of them can be upgraded up to 3 times, which may result in a faster cooldown or an increase in power. These upgrades are paid with your experience points.

How to find all the relics?

The relics are obtained in various ways - some can be found next to collectibles or in legendary chests, while others are received along with progress in the main story. 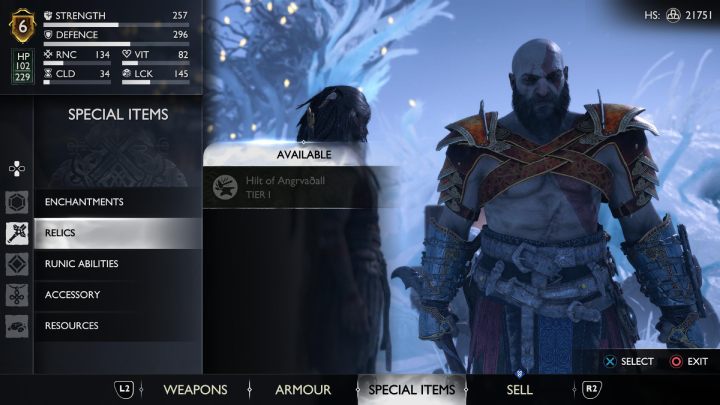 A few of the relics are obtained through side activities, or you'll have to find the required components to forge them in the dwarven store. After finding the right scroll, the new relic will appear in the store in the Relics tab.

Talisman of Meign is the first relic you'll find. You'll obtain it in The Applecore in Svartalfheim in the course of the second story mission (The Quest for Tyr). 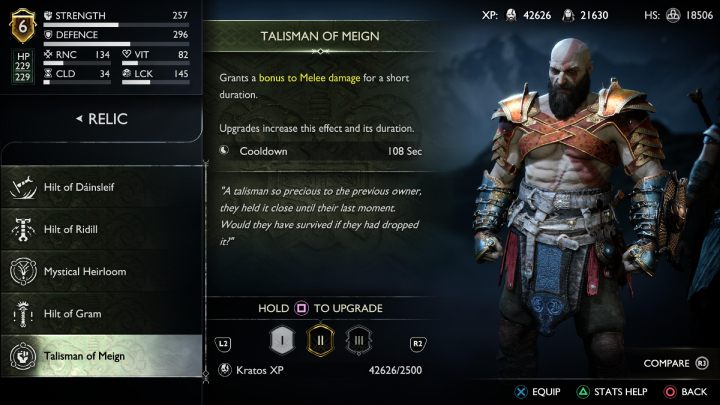 When activated, this relic gives a boost to damage dealt for a short period of time.

Another relic obtained in the course of the main storyline is the Glaive of Dodher. You can loot it from defeated Aesir Einherjar in the sixth story mission (The Reckoning). 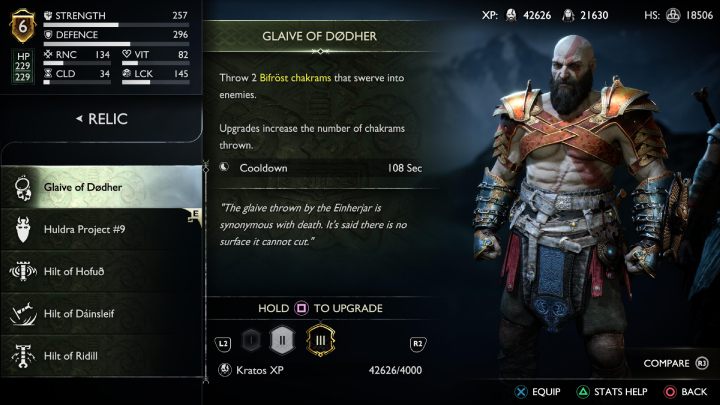 When activated, this relic fires 2 Bifrost projectiles that home towards the opponent. 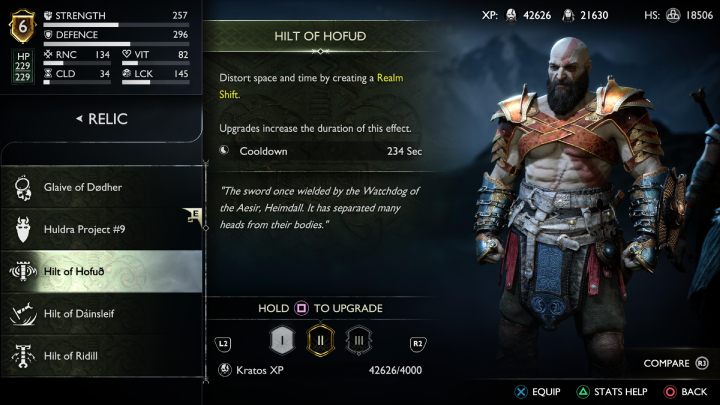 When activated, this relic slows down time, creating a Realm Shift.

This one can only be obtained after completing the story campaign. Once you're in endgame phase, visit a dwarven store (cost - 10,000 hacksilver). 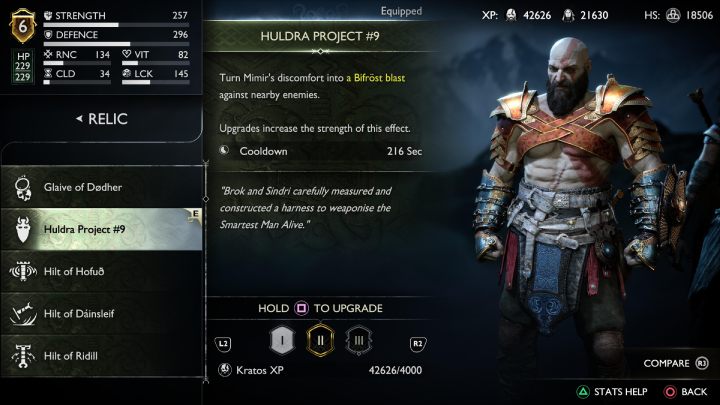 Mystical Heirloom is found as a collectible, but in order to be able to get it, you need to complete the 10th story mission (Forging Destiny). Once you have the Draupnir Spear, return to Midgard and find and destroy a glowing ice block in the southern part of Lake of Nine. The relic is next to a corpse of a dwarf and the Receipt of Purchase scroll. 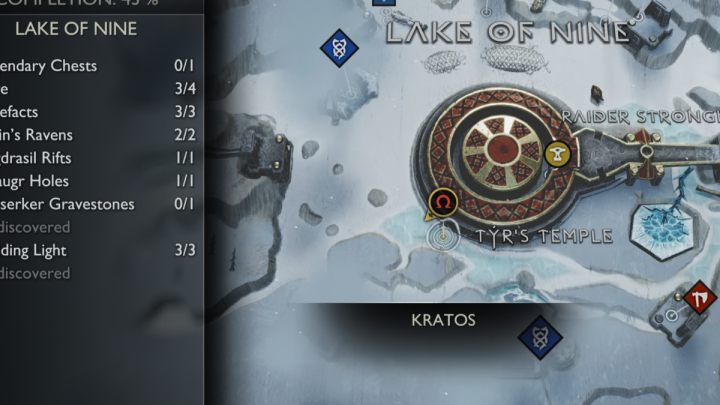 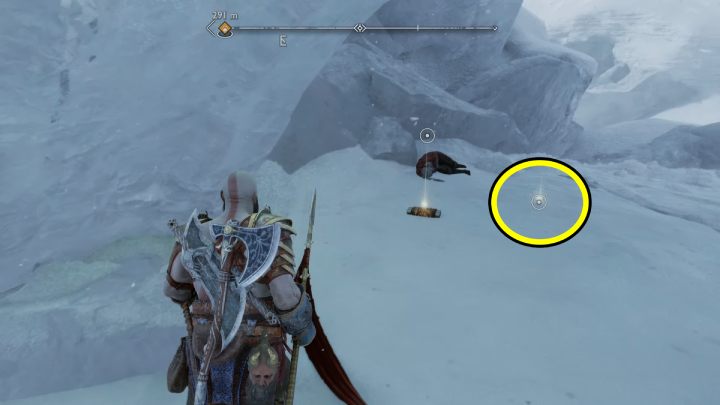 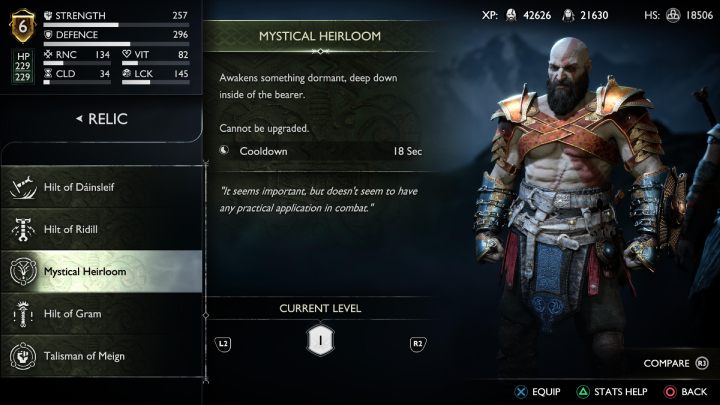 Mystical Heirloom is the only relic that can't be upgraded. Moreover, it doesn't have any battle value, as it doesn't offer any powers that make fighting easier. Its use is to summon secret mini-bosses that are found in various regions. These defeated secret enemies leave a lot of rare crafting components that are needed to upgrade other gear.

The Hilt of Gram is found in one of the legendary chests in Alfheim. To learn the location and how to open the chest, visit Temple of Light page of the guide. 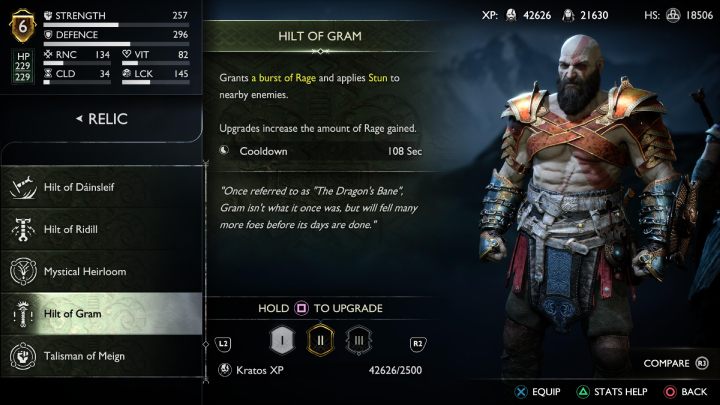 When activated, this relic gives a bonus to Rage and applies stun to all nearby opponents.

Motsognir's Call is found next to a legendary chest in Aesir Prison Wreckage in Niflheim. This region becomes available only after completing the main storyline. 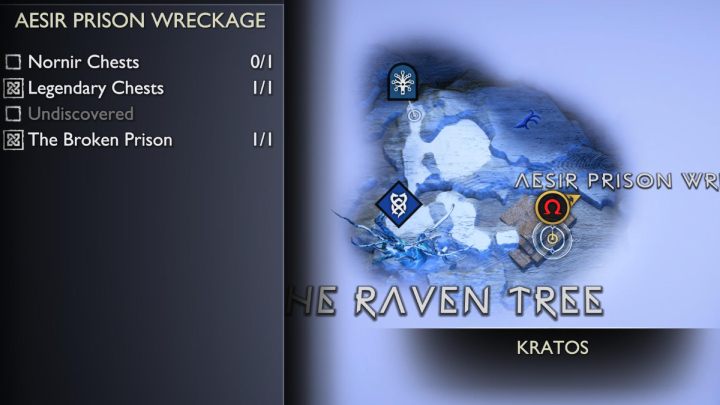 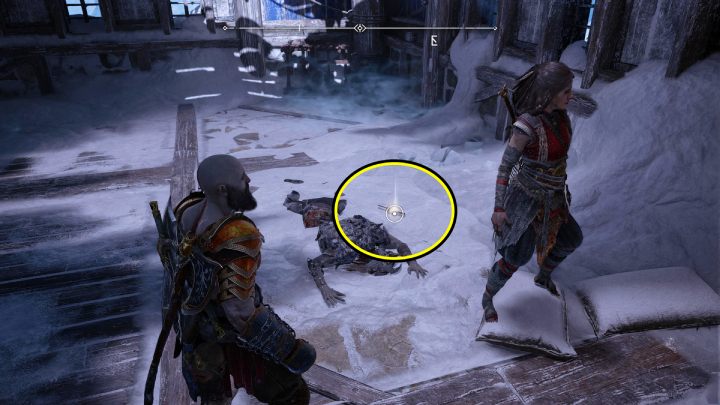 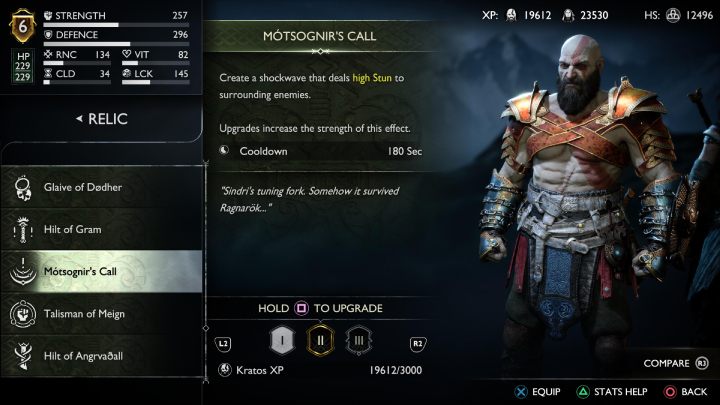 When used, this relic creates a shockwave that applies a powerful stun on nearby opponents.

The Hilt of Dainsleif is associated with The Lost Pages side activity. To craft it, you're going to need a scroll that is found in The Elven Sanctum in The Forbidden Sands region of Alfheim. 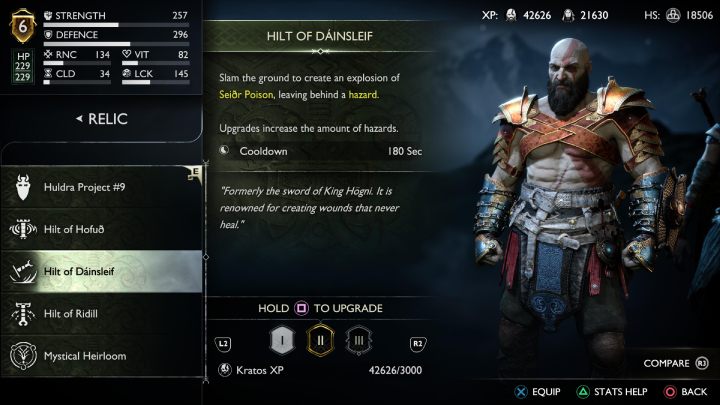 The remaining components needed to craft Hilt of Dainsleif are obtained by defeating Ormstunga, a mini-boss appearing during The Lost Treasure Favour. Once you have all the components, travel to the closest dwarven store and craft the relic.

When used, Hilt of Dainsleif creates an explosion of poison, leaving fumes that damage enemies.

The Hilt of Angrvadall has to be crafted through a dwarven store. To craft the item, you need a scroll which is a part of The Lost Pages Labour - it is the one found in The Barrens in Alfheim, next to a legendary chest to be exact. 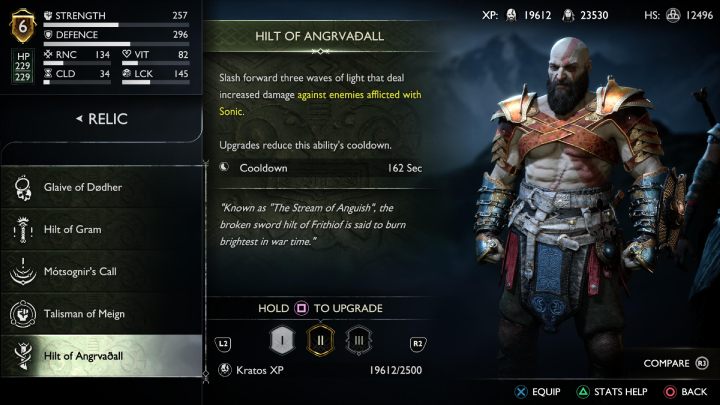 The final component needed for the relic is received after defeating the boss of The Desert Door Favour (The Forbidden Sands - Alfheim).

When used, Hilt of Angrvadall shoots three waves of light which deal extra damage to targets that have sonic status applied.

Hilt of Ridill is another relic associated with The Lost Pages Labour. The scroll needed can be found in The Lost Treasury in Midgard. You'll visit this location during the course of Sigrun's Curse Favour. 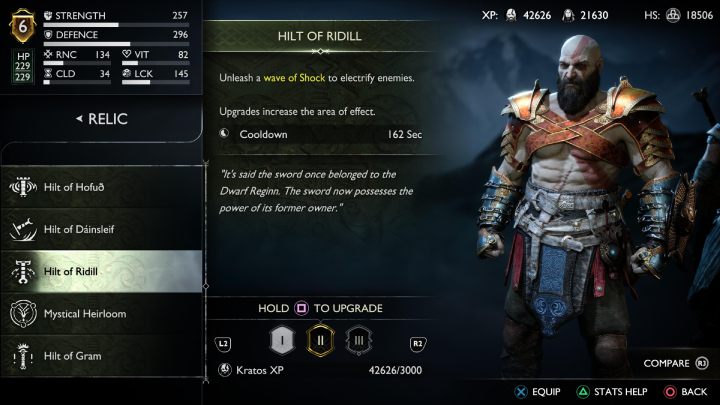 The second component needed for the relic is received after defeating Olaf Nutson, the final boss from Animal Instincts Favour.

When activated, this relic unleashes a wave of electricity that hurts enemies around you.

The Hilt of Tyrfing is the final relict associated with The Lost Pages Labour. To forge this item, you will need a scroll found in The Plains in Vanaheim. 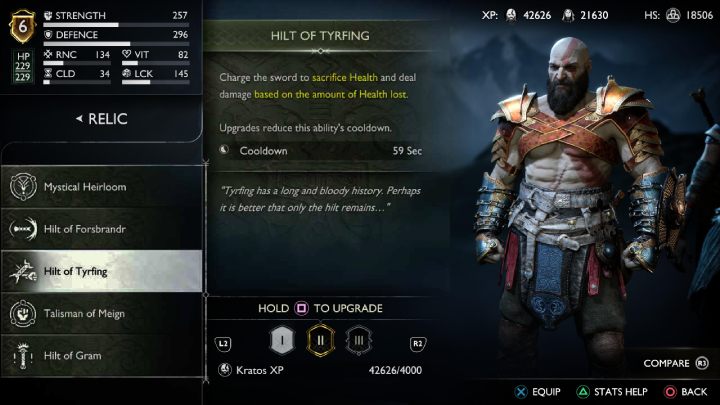 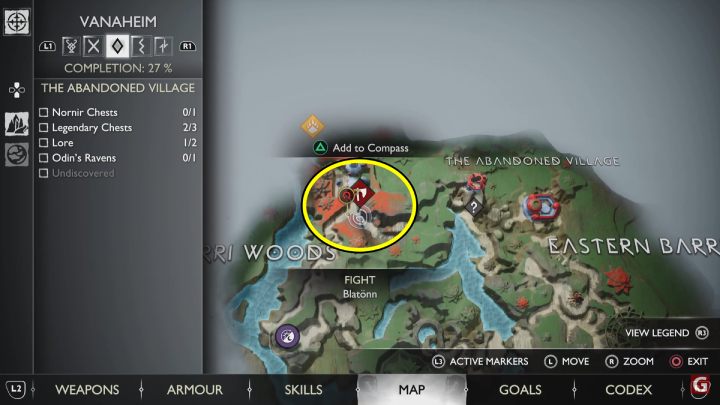 The ingredients necessary for crafting this relic are received after defeating Wulver Blatoon, an optional mini-boss found in The Abandoned Village in Vanaheim.

When used, Hilt of Tyrfing takes a portion of Kratos health and returns it in from of damage.

The Hilt of Hrotti can only be obtained after completing the 13th chapter of the story and Scent of Survival Favour in Vanaheim. More on how to unlock this region can be found in Reaching the Crater in Vanaheim page of the guide. 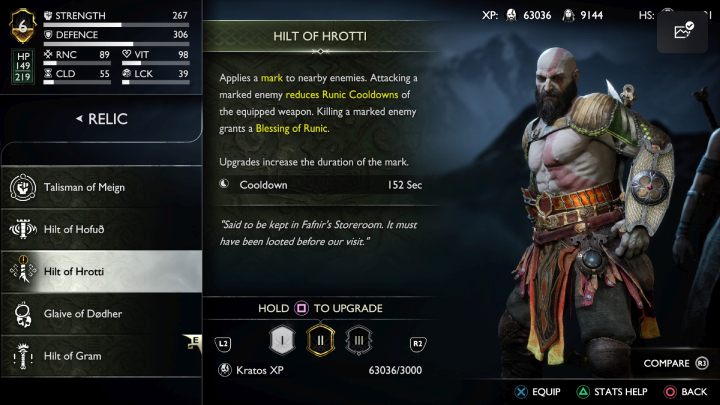 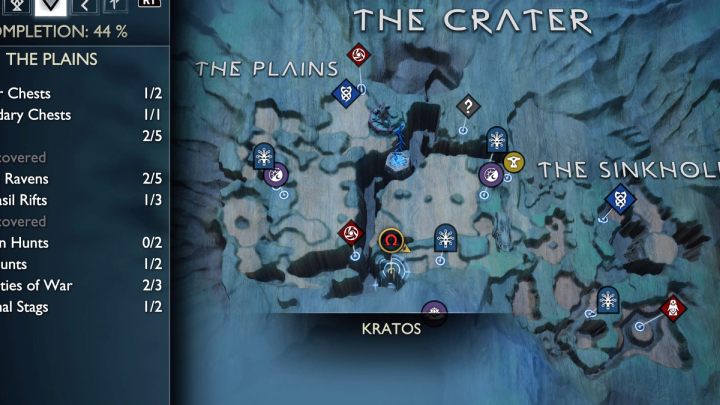 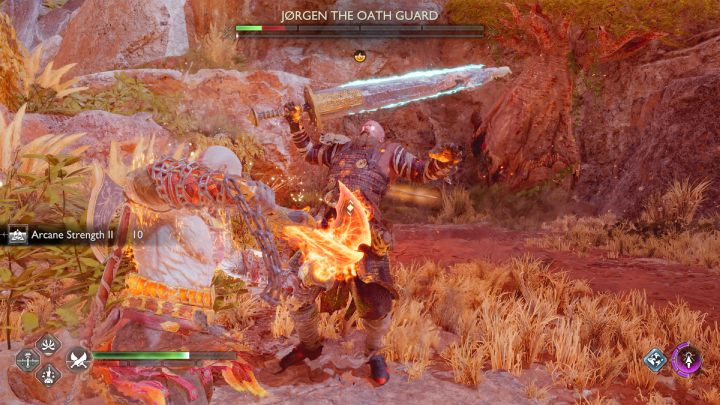 During the exploration of The Crater, you'll encounter a mini-boss trio called Oath Guards. The second defeated mini-boss leaves this relic behind.

When activated, this relic places a mark on nearby enemies. For each struck marked enemy, your currently equipped weapon's cooldown will be shorter. Killing a marked enemy gives you Blessing of Runic.

Hilt of Forsbrandr is received after hunting all 48 ravens i.e. completing Eyes of Odin Favour. 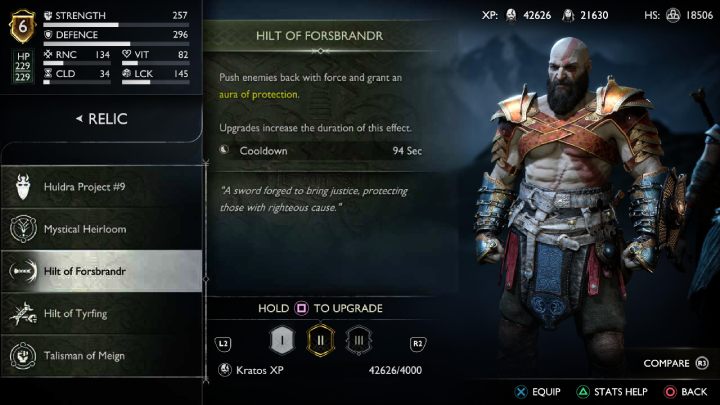 When used, this relic pushes enemies back, at the same time giving Kratos a protective aura.

At first, Hilt of Skofnung is a key item received during one of the story quests. This item will allow you to find and summon berserkers - defeating them all is the objective of Fit for a King Favour. After defeating all berserkers, this relic will find its way to your inventory. 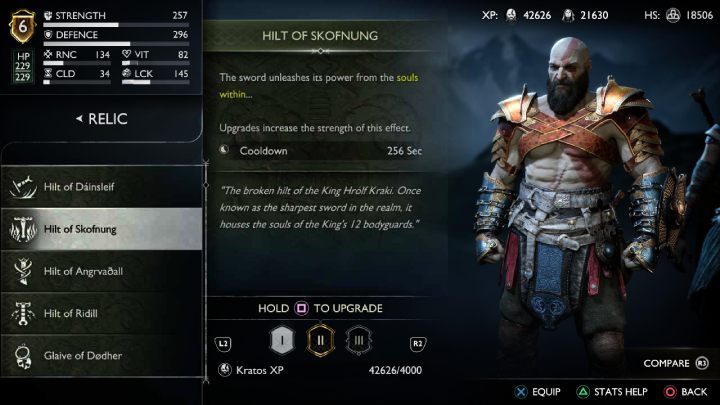 When activated, Hilt of Skofnung summons several spectral swords that attack nearby opponents.