This page of our God of War Ragnarok guide is dedicated to Freya's Missing Peace side quest. Our guide will help you in reaching Freya's wedding site in Vanaheim, solving the puzzles in Vanir Shrine, and finding a unique sword Mardoll for her. 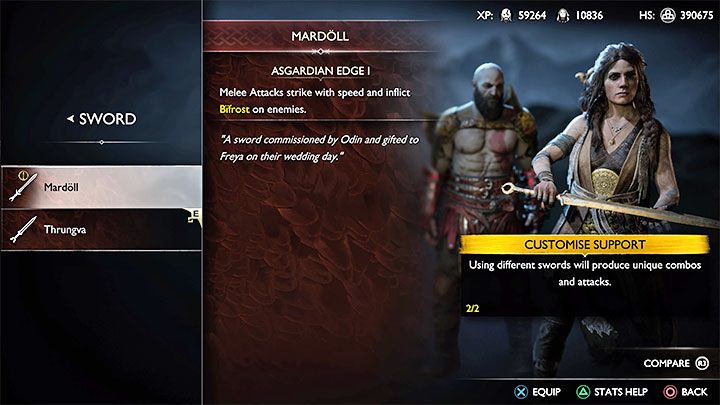 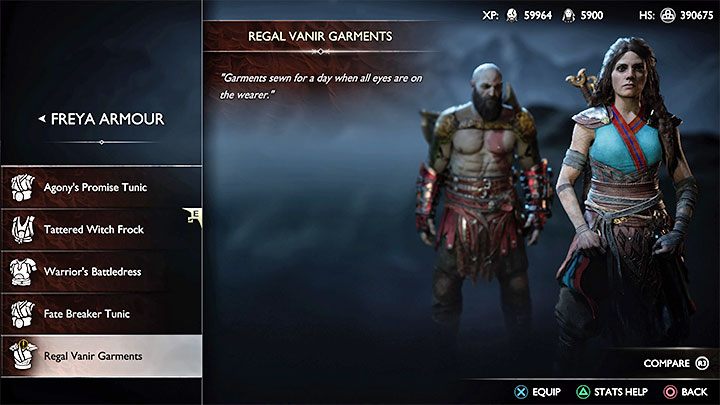 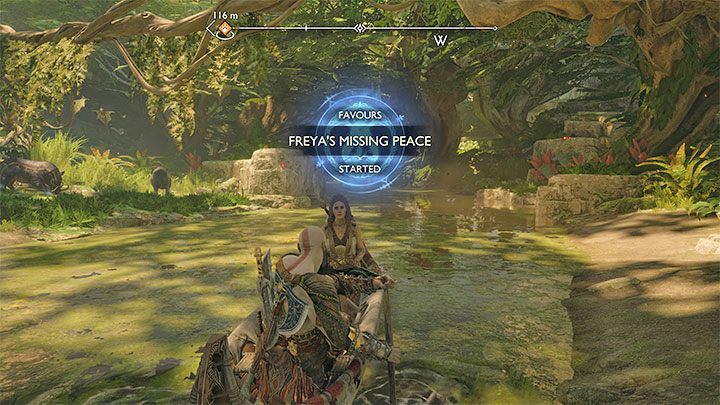 This Favour will be unlocked automatically shortly after completing The Reckoning story quest (first visit to Vanaheim) During your time with Freya as companion, you'll learn that she wants to visit her wedding site.

Note - the Favour can only be completed with Freya as your companion. If you enter Vanaheim later with Atreus as companion, you won't be able to explore the hidden Vanir Shrine region. In such case, you need to progress with the main story until Freya once again becomes your companion in Vanaheim. 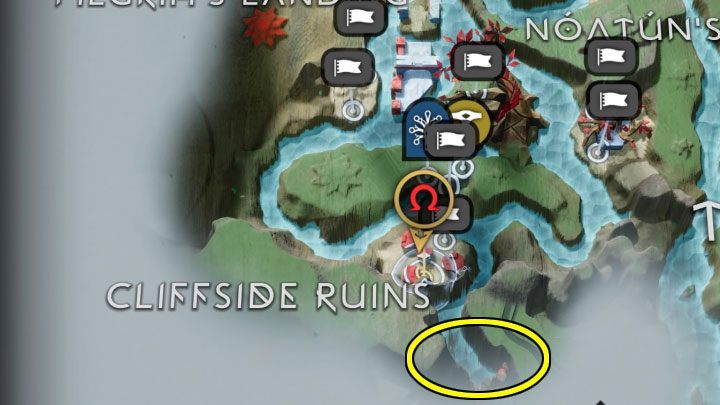 You need to travel to the southern part of Goddess Falls, and by default, this area is inaccessible, as there is a huge gate on the river blocking access to southern Vanaheim and you need to open it.

Reach the Cliffside Ruins region adjacent to the gate and get rid of the monsters. 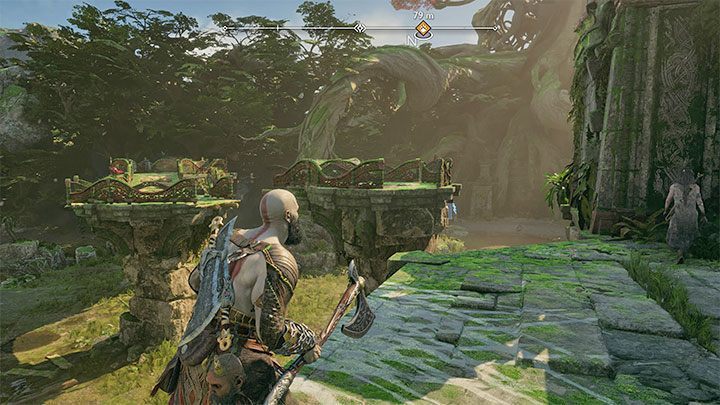 Find a climbing spot in the Cliffside Ruins. Once you are at the top, jump to the next platforms shown in the picture. 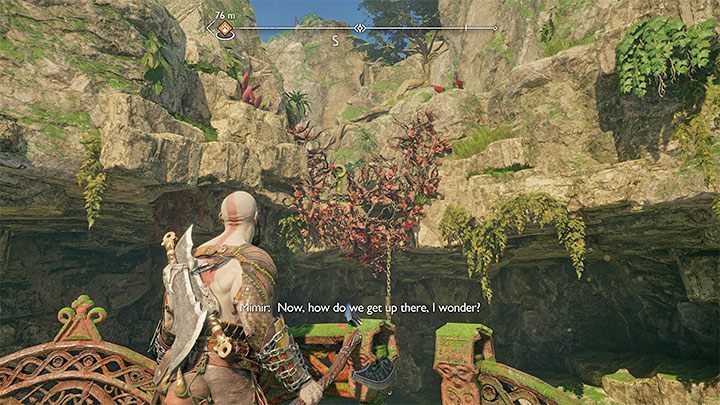 Position yourself where you can see the chain covered by red vines. Your task is to remove the vines. 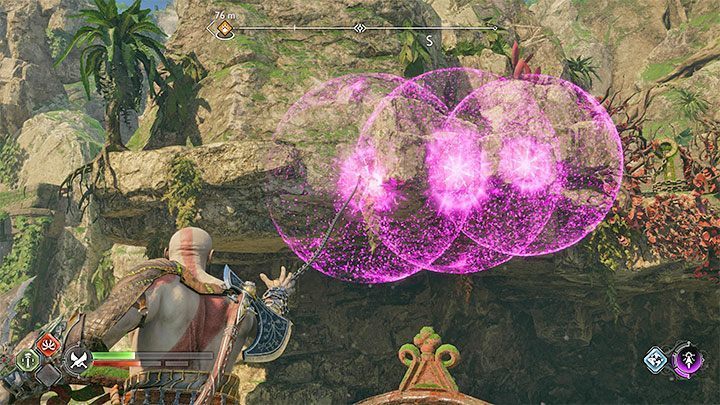 You need to set the vines on fire, but they are out of reach of your Blades. Ask your companion to create 3 seals next to each other - they must interlock and reach the vines. In addition, the seal closest to you has to be in range of Blades of Chaos. Equip Blades and hit the first seal. The strike should carry over the seals and finally set the vines on fire.

If there is no chain reaction, it is likely that the seals are too far apart. Delete them (press X while aiming) and create new ones. 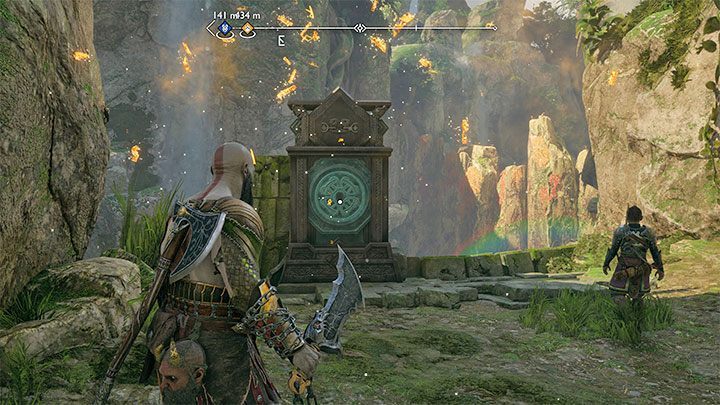 Once the obstacle is gotten rid of, go down, reach the chain and climb up. In the new area you'll find a rune creation spot - it is shown in the screenshot.

Wait for the icon to appear - press Square - and a rune will be uttered and a pathway will be unlocked. Return to the boat and sail south. 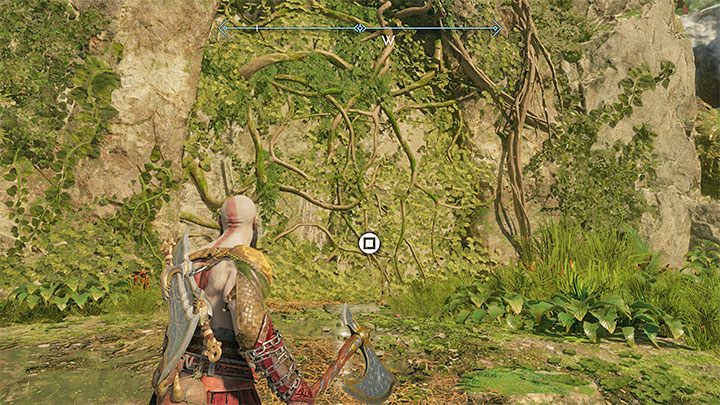 After finding yourself in Goddess Falls, climb the rocks up. Kratos and Freya have to reach a secret passage (screenshot) - only your companion can use it. Position yourself in front of it and press Square - Freya will unlock a new pathway. You'll enter a hidden region - Vanir Shrine. 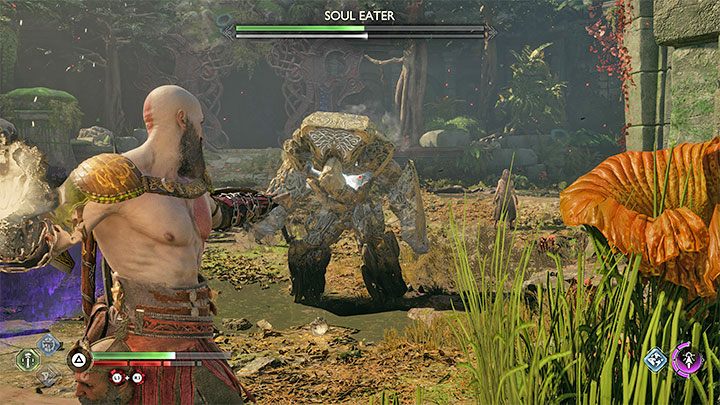 The exploration of the new area begins with a mini-boss encounter against a Soul Eater. Attack its exposed core - throw the Axe and projectiles coming out of the boss at it. When a Soul Eater is stunned, you can jump on him (R3). 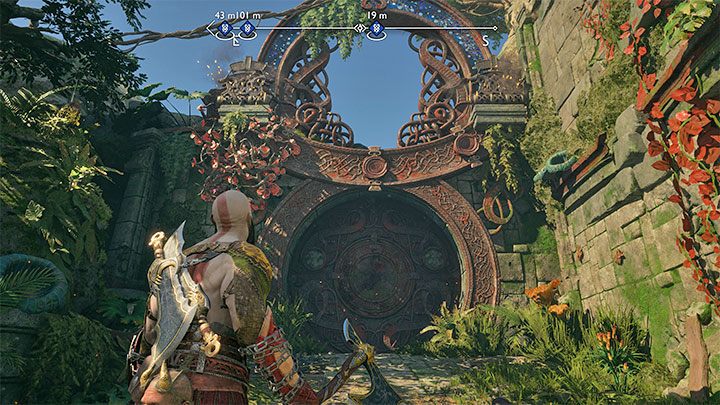 You have to gather 3 things belonging to Freya and they are hidden in southern, northern and western parts of the Shrine.

When exploring the southern part of the region you'll be interrupted by a locked circular passage (screenshot). You must: 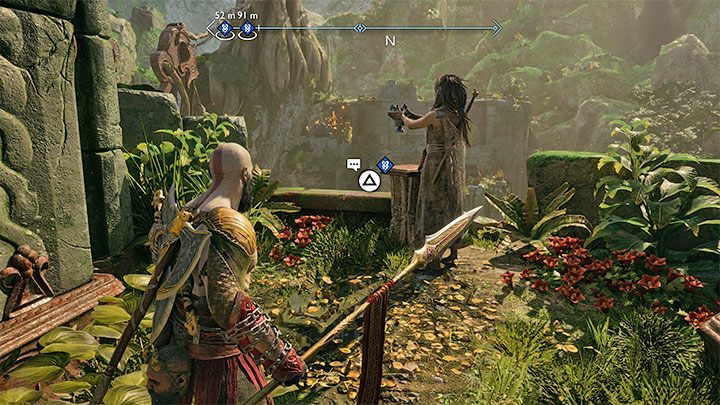 Defeat incoming monsters and use a seal to set the locked pathway on fire. The first atrifact is here.

Moreover, you need to read the encountered rune and this is the first step to unlocking the pathway west. 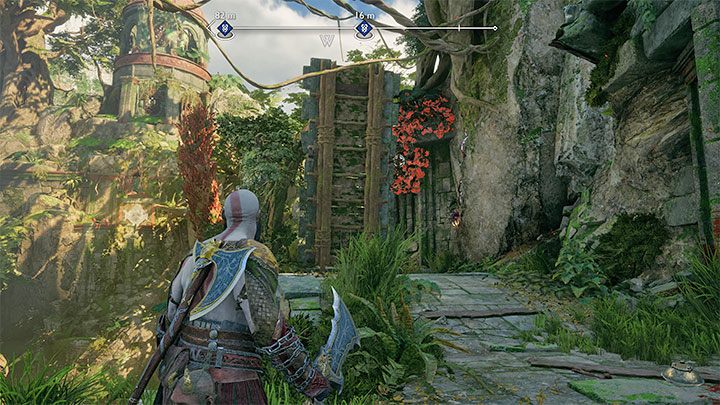 Return to the central area and start exploring the northern part of the region. You'll be stopped by a raised drawbridge and you must create and detonate seals so your attack reaches the vines on the right.

After destroying the vines, throw the Axe at the two shields: 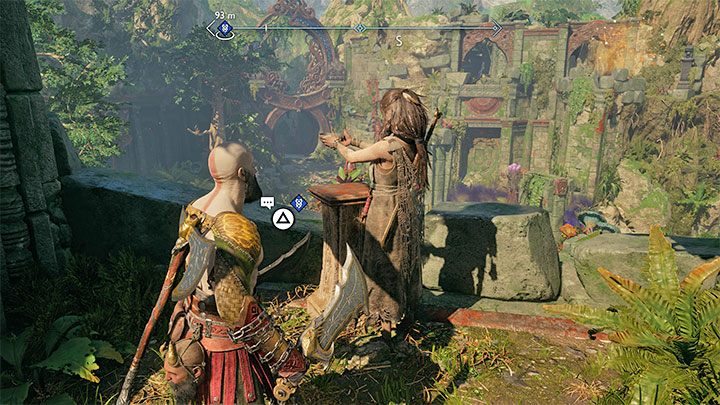 Defeat the encountered monsters and reach the location of the second artifact.

The next step is to read the second encountered rune and this is the second condition to make the pathway west available. 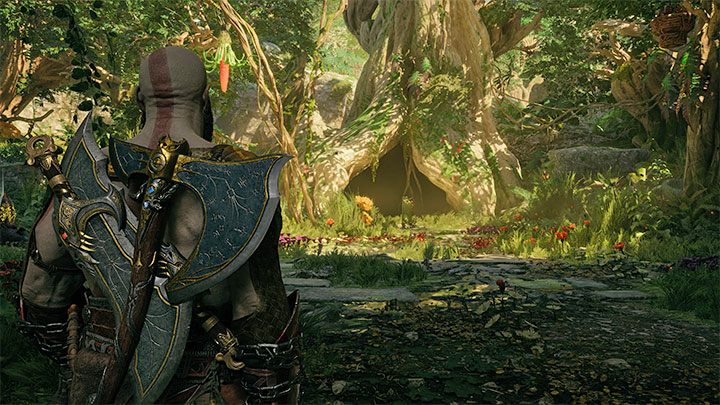 If you've read both runes (at the end of southern and northern paths), the pathway west will be unlocked.

Interact with the object next to the corpse. You'll reach the third artifact - the sword Mardoll belonging to Freya. 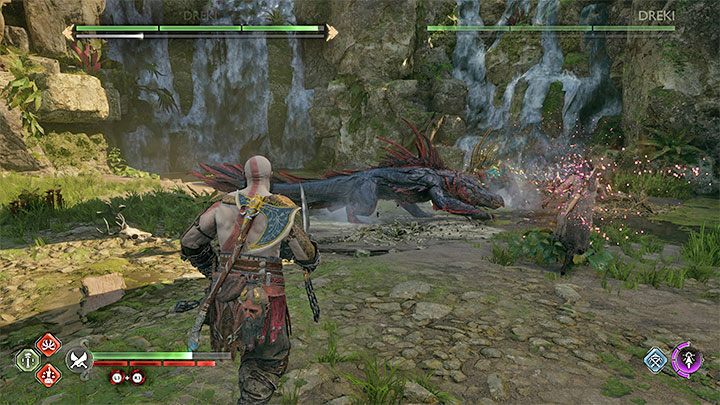 Time to vacate the premises - make your way to the exit. The area where you fought the Soul Eater will now be inhabited by werewolves. Defeat them all, then ask Freya to move the rocks (Square).

Return to the boat in Goddess Falls. Here you'll have to face the Dreki mini-boss duo. To make matters easier, attack them one by one and heed Mimir's warnings of incoming attacks. Once the battle is won, push the boat back to water, and the quest will be concluded.