The Favour is activated during your first visit to The Oarsmen or The Derelict Outpost regions of Midgard. These zones are available after completing the 9th story mission (The Word of Fate). 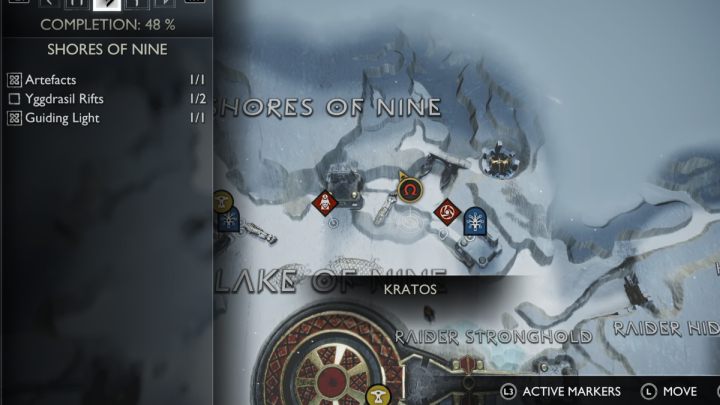 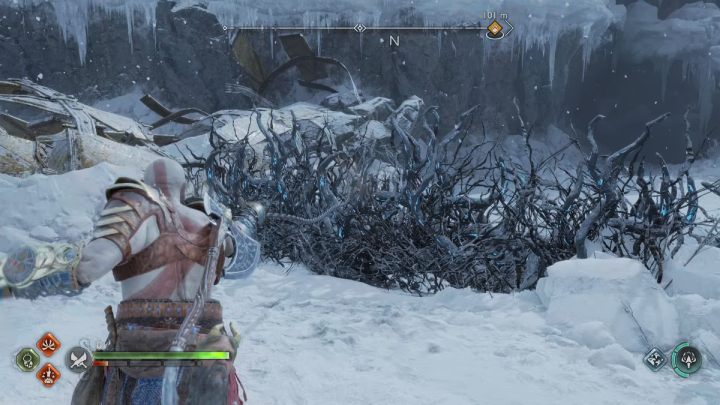 The Oarsmen region is accessed from the northern side of Lake of Nine. Jump over the beam and go below a huge boulder. Now, use Blades of Chaos to get rid of the branches blocking access to the cave.

Find clues from Sigrun's Past

After entering the cave, you will be attacked by a group of raiders. The fight is made more difficult because of the fact that these enemies are resistant to ice element. To counter that, use Blades of Chaos first to neutralize their ice resistance. 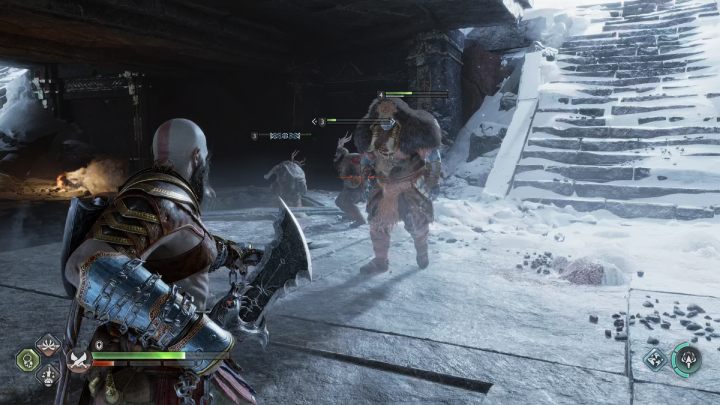 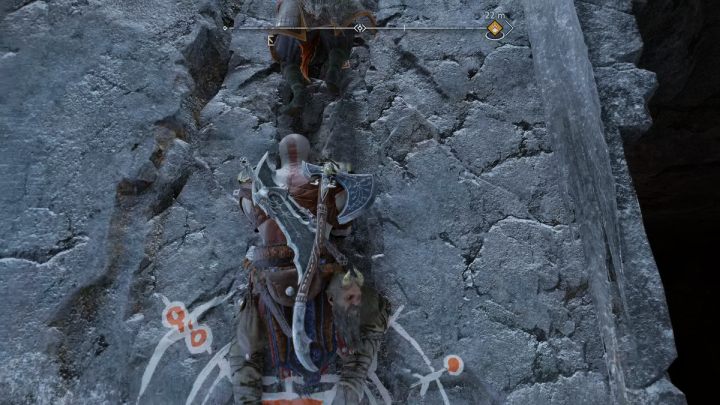 Once the enemies are gotten rid of, there is a wall for you to climb near the standard chest. 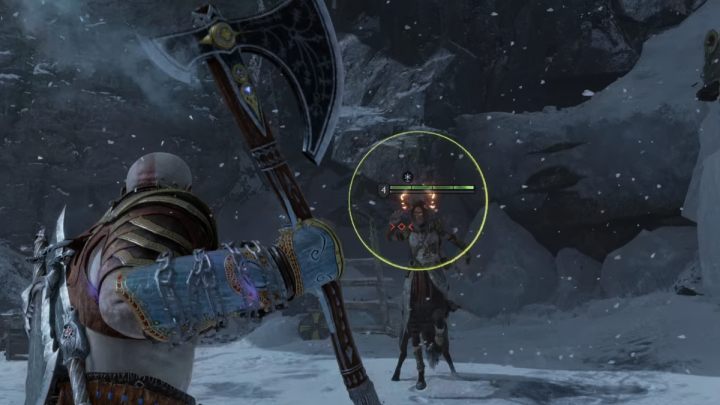 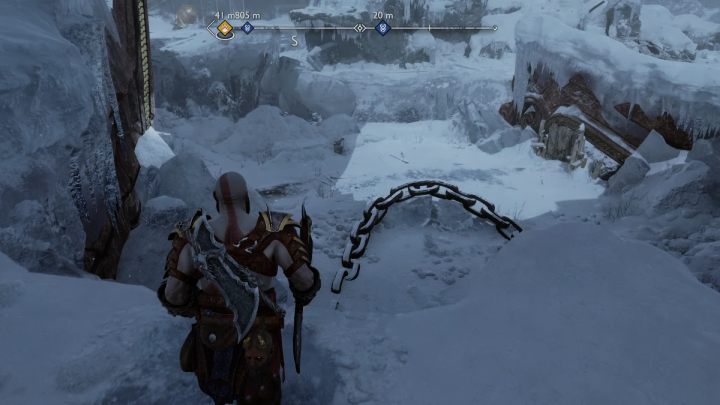 As you leave the cave, you'll be attack by additional raiders and a Stalker. Her weak point is her horns - when they are lit, an accurate Axe throw will stun her.

After the battle is won, climb the rock using the chain, jump down and move the large chain lying on the ground. Now go downstairs to the secret chamber. 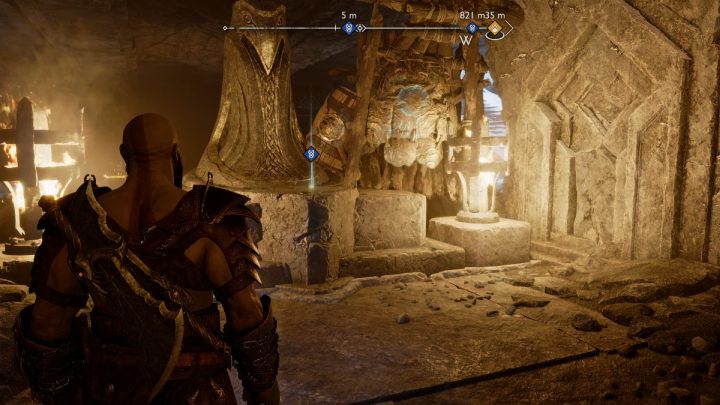 Defeat all wisps encountered here and read the Lore Marker found next to the wall. Turn left and pick up the first key fragment (near the statue) and raise the bars. Once you are past the bars, exit the cave and follow the map marker to find the second key fragment.

The second half is located in The Derelict Outpost region. As you reach the zone, you'll find a chain near the Mystic Gateway that will take you to a new area. 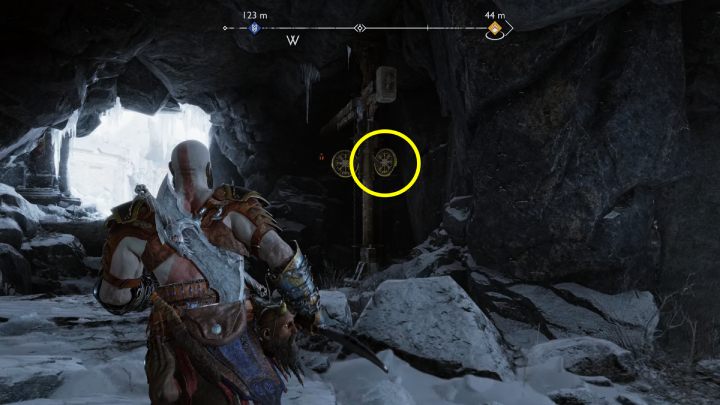 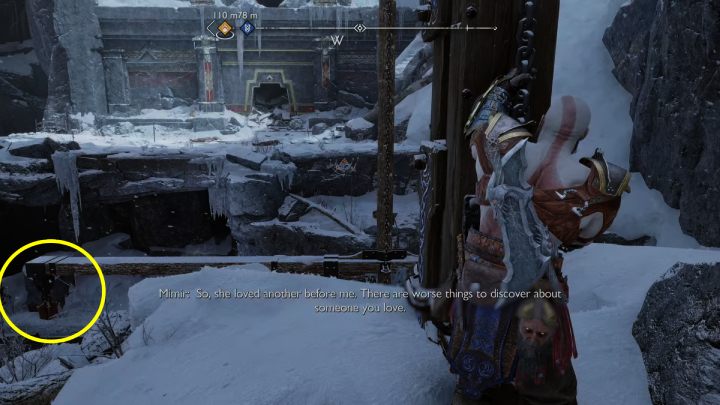 Raise the handle on the next crane all the way up and jump further. Defeat a raider group and continue forward along the path. Jump over the broken bridge. 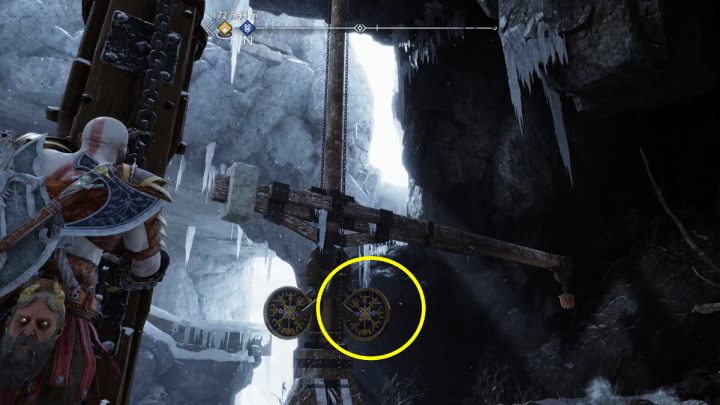 The final crane has to be lowered to the bottom - once that is done, throw the Axe at the shield on the right and once again raise the crane all the way to the top.

Jump to the other side, climb the rock to reach the top, and read the new Lore Marker. You can now pick up the second half of the key (it is lying next to the statue).

Once you have both halves of the key, you can open The Lost Treasury door. 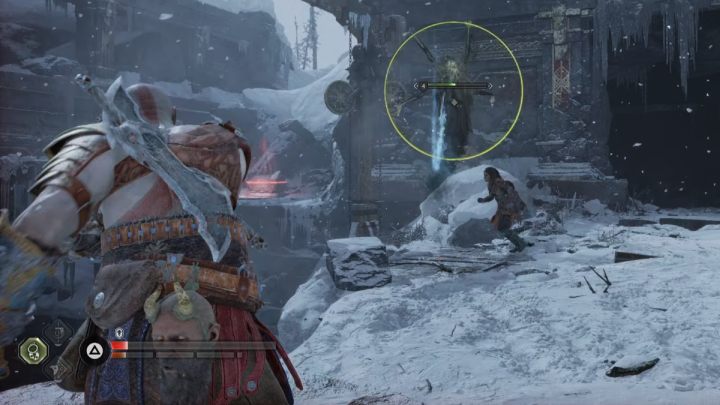 Turn left next to the statue and follow the path. Along the way, you'll be attacked by a Wight and a group of raiders. You can interrupt attacks signalled by yellow rings by throwing your Axe at the opponent.

Leave this area and follow the new map marker. As you reach your destination, you'll be attacked by the final raider group. 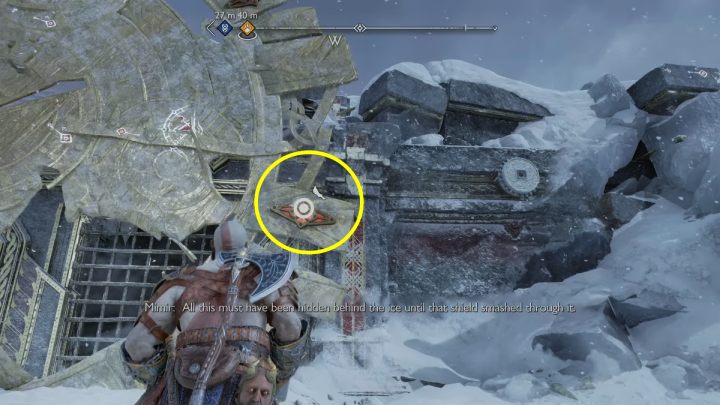 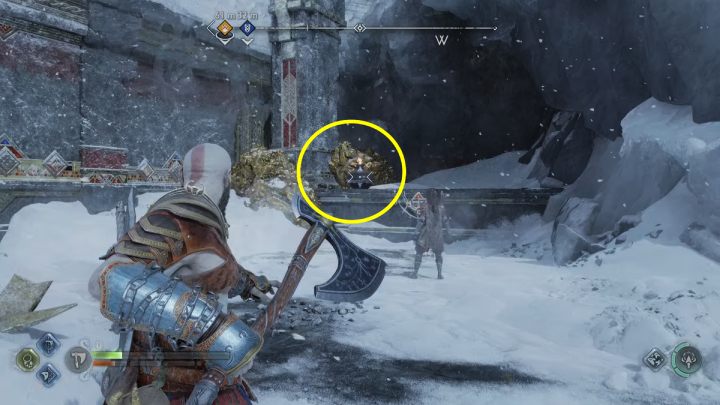 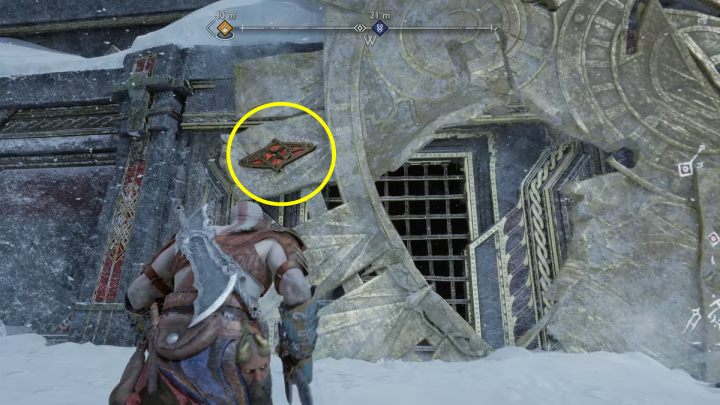 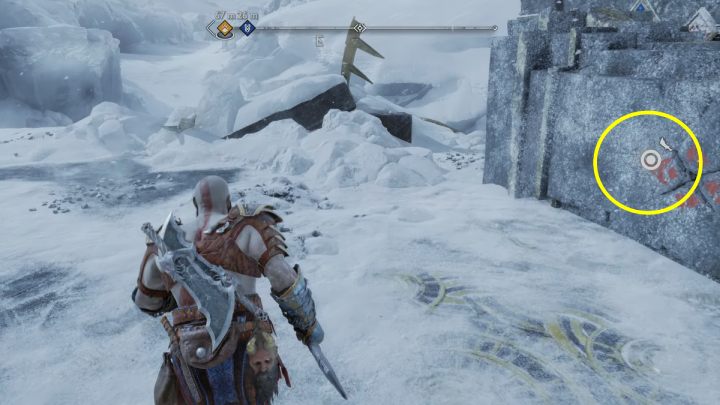 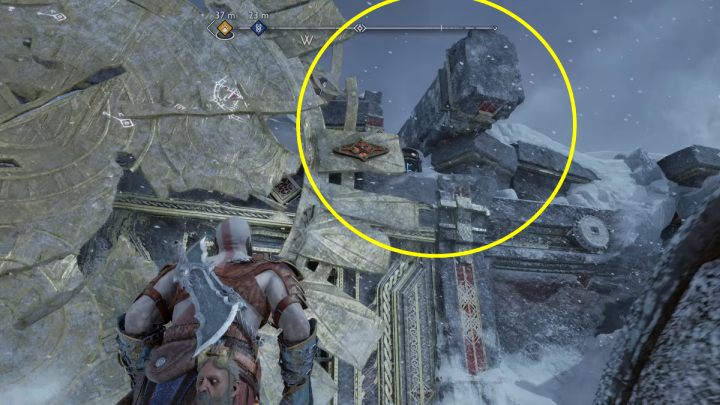 Now you can make the final move - move the shield right. The stone column will stop the shield in the opportune location, revealing the entrance to the treasury. 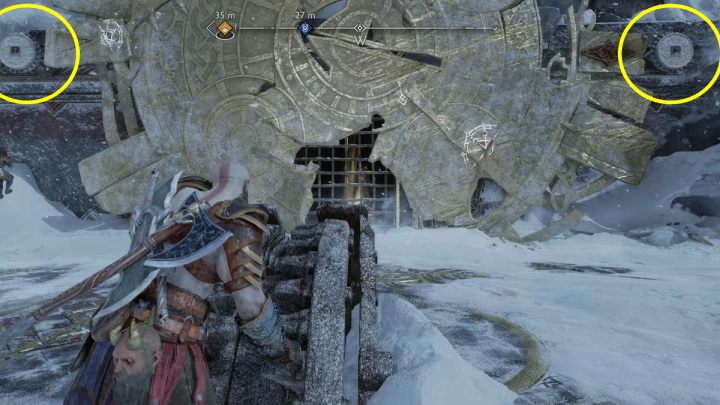 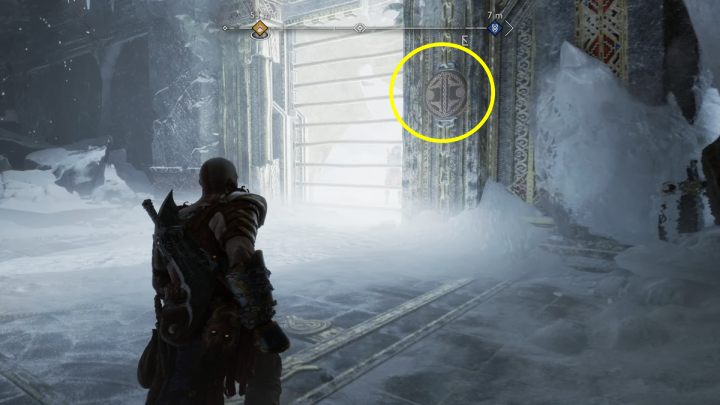 Grab the wheel and raise the bars. Without letting go of the wheel, hurl the Axe at one of the small shields on the wall, then fire a sigil arrow at the same area. Retrieve the Axe and hit the second shield. Now quickly run inside.

When the gate closes behind you, summon your Axe and destroy the weak point on the chain. Use sigil arrows and Blades of Chaos on the red vine blocking the entrance to the treasury.

As you enter the tomb, you'll be attacked by a Traveller Champion. Use Spartan Rage and runic attacks to break through the opponent's shield. 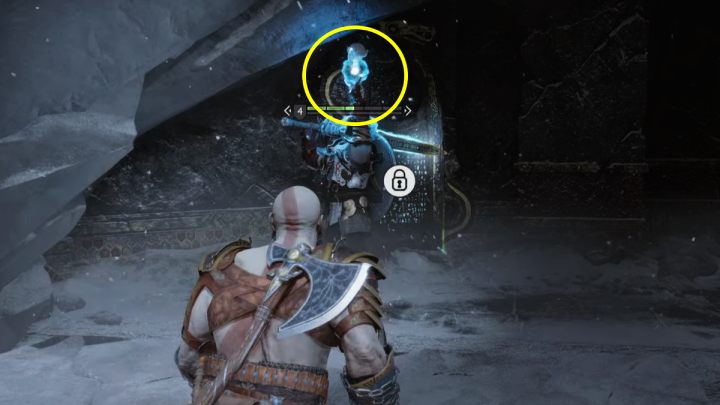 As soon as you see the enemy raising his hand up, hurl the Axe at the blue flame to interrupt his casting.

From time to time, the enemy will summon Wisps to help him. You can use them to stun the main opponent. When a wisp is near the traveller, fire a sigil arrow at the wisp. As the wisp is stunned, quickly run up to it and hit it with the Axe. The wisp will explode, hitting the Traveller.

Once the battle is won, read the final runes.