Cliffside Ruins in Vanaheim is an area next to a large gate in the southern part of this world in God of War Ragnarok. This page of the guide lists the collectibles and side activities of the Cliffside Ruins region - Nornir Chests, Legendary Chests, Lore and Favors. We show how to reach the individual secrets and how to attain 100% completion of the region.

In the Cliffside Ruins region in Vanaheim , you can get the following collectibles and optional tasks:

Note - Some secrets in Cliffside Ruins are not available until subsequent visits to Vanaheim later in the game. Getting to some of the finds can be made easier by switching the time of the day - we've described this mechanic in detail in Can you change the time of the day? page of the FAQ section.

Conscience for the Dead - favor 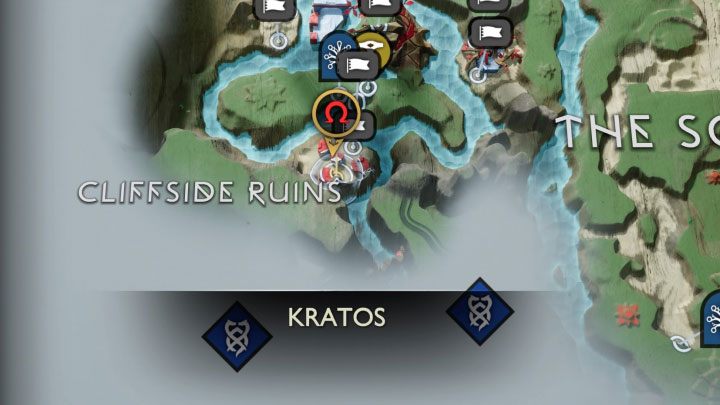 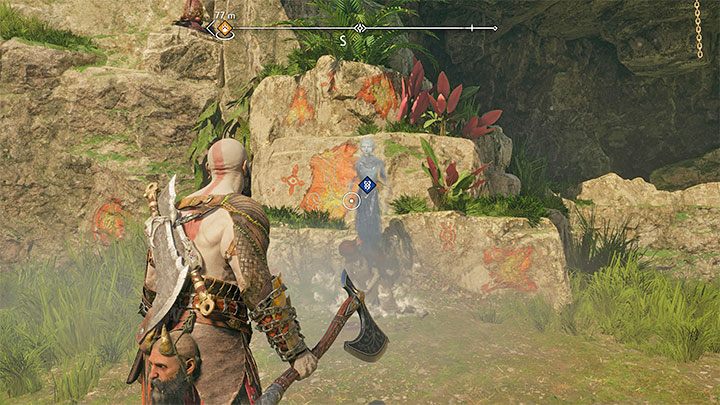 Reach the dock in the Cliffside Ruins by boat and defeat all the monsters. After that, you can find a spirit - Gunhild.

Way of eliminating Seidr Fanatics can be found on a separate page in our walkthrough.

Reward: Mists of Helheim - a powerful rune attack for the Leviathan Axe. 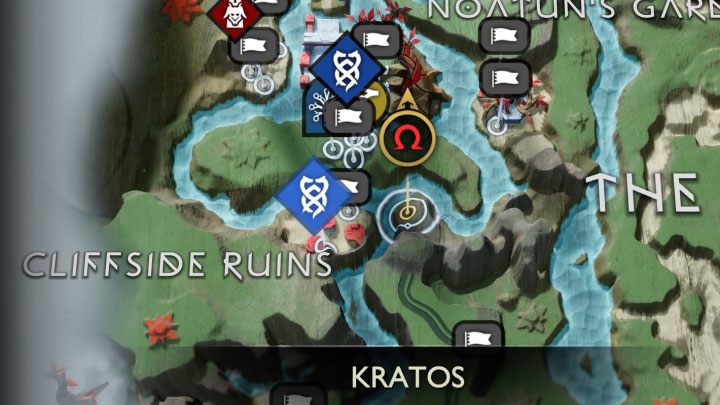 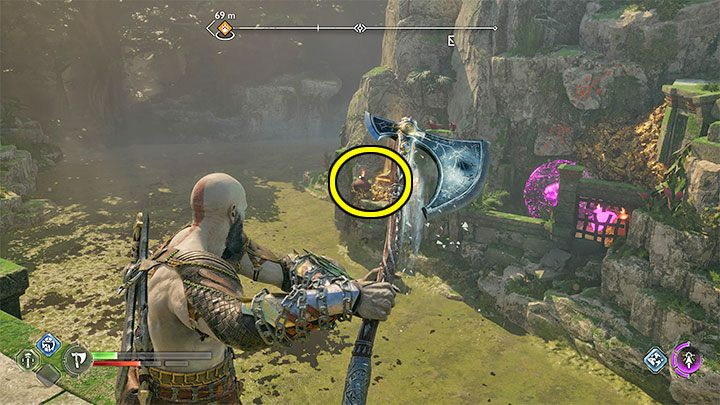 The Legendary Chest can only be reached from the Veiled Passage region - it is southeast of the Cliffside Ruins. You must first unlock the blockade on the river and we described this on the Gate to southern Vanaheim page.

While still in the Cliffside Ruins region, climb to a higher level and locate the Legendary Chest on the other side of the river. Throw the axe at the red vessel next to the chest - we marked it in the picture. You will get rid of the first group of yellow crystals. 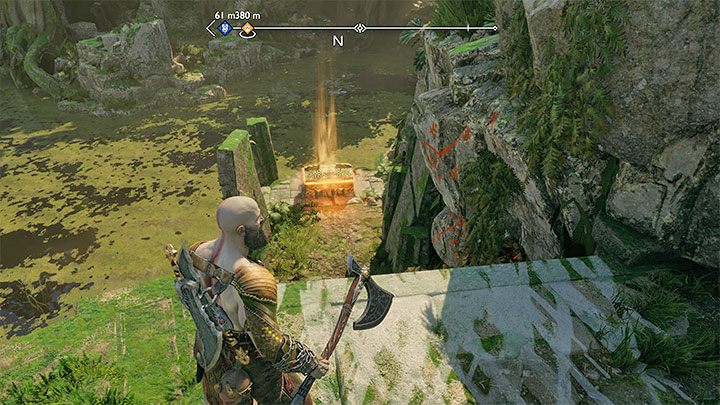 You must now go through the caves and reach the northern end of the Veiled Passage. Reach the place where you will be above the chest. You can't jump to it, because the way is blocked by more yellow crystals. 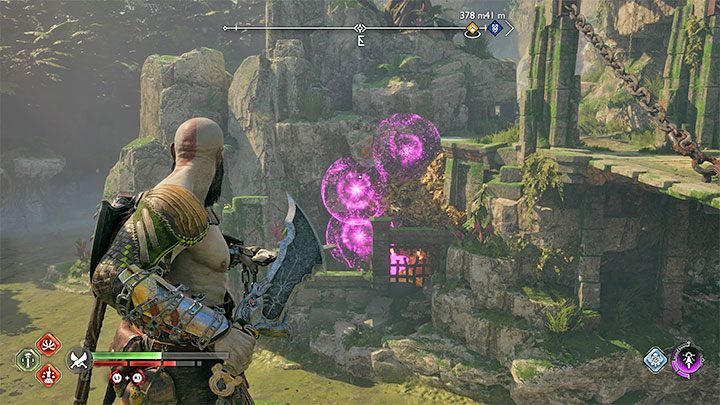 There is a drawbridge in the area - lower it using the chain. When you get to the other side, stand in the spot in the picture. Create several seals - they must connect the yellow crystals to the upper path. Reach the nearest seal and blast it with the Blades of Chaos, and a chain reaction will destroy the others. You can now reach the Legendary Chest. 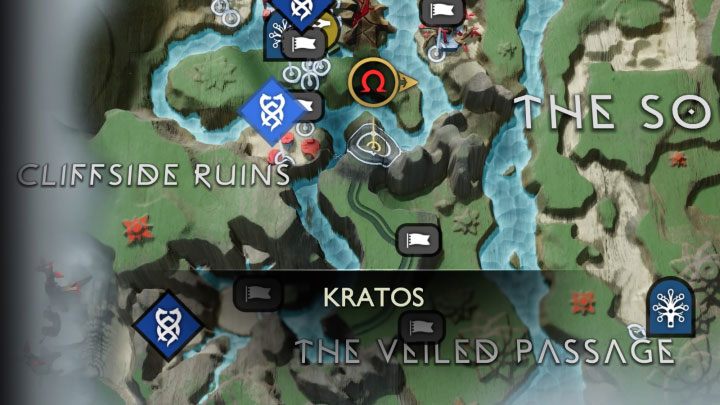 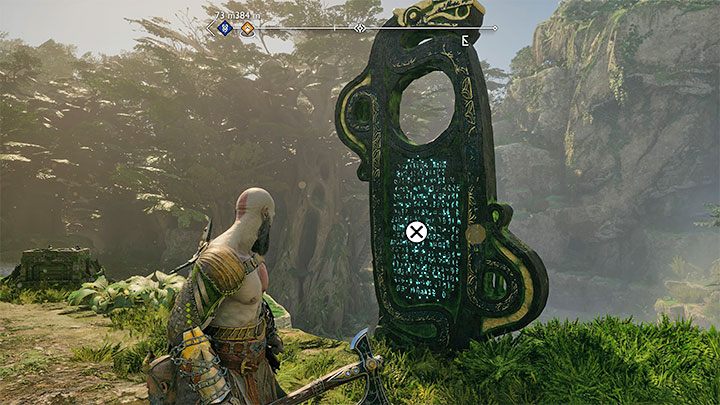 As with the Legendary Chest described above, you must pass through the Veiled Passage first. You will be east of the Cliffside Ruins's boat dock.

After leaving the caves, you will find a rune tablet. 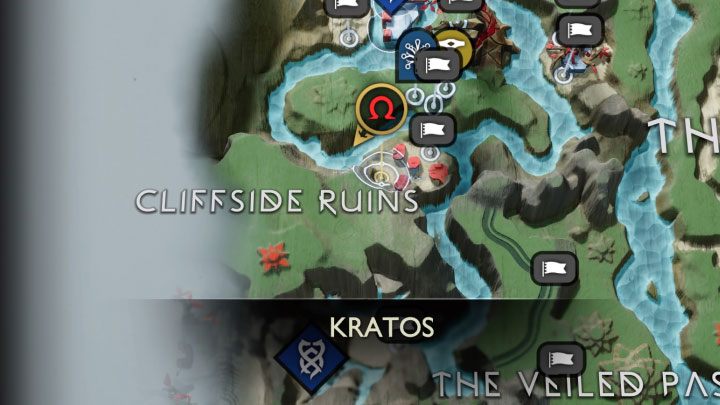 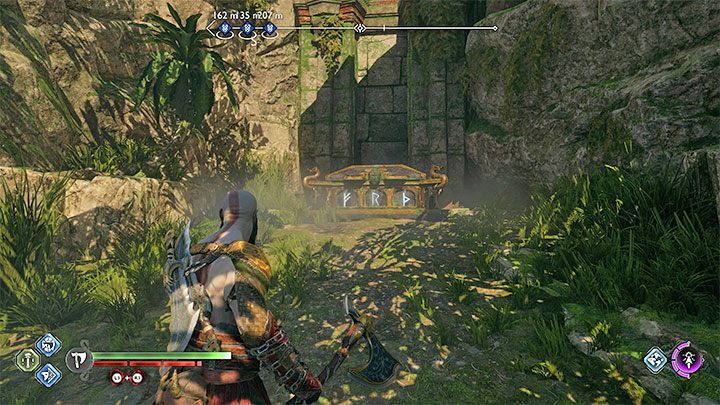 The chest with runes is in the western part of the lower area. 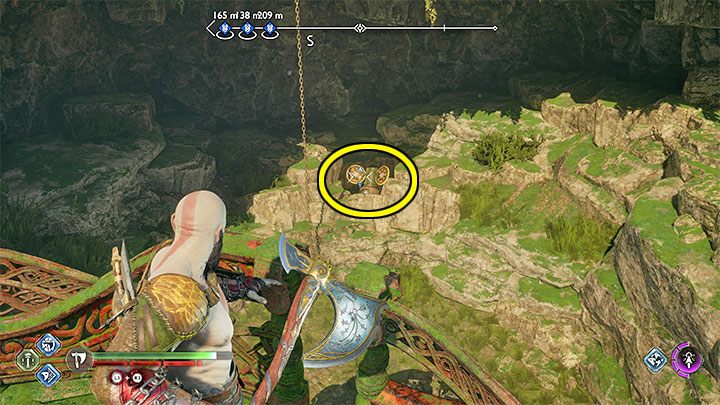 To open the chest, you need to throw the axe at targets in the area and set up the correct runes. Unfortunately, all 3 rotating mechanisms are well hidden.

Shield 1 can be found after you climb to a higher level of the ruins. Jump to the small top shelves. From one of them, you will see a chain and a rotating mechanism. 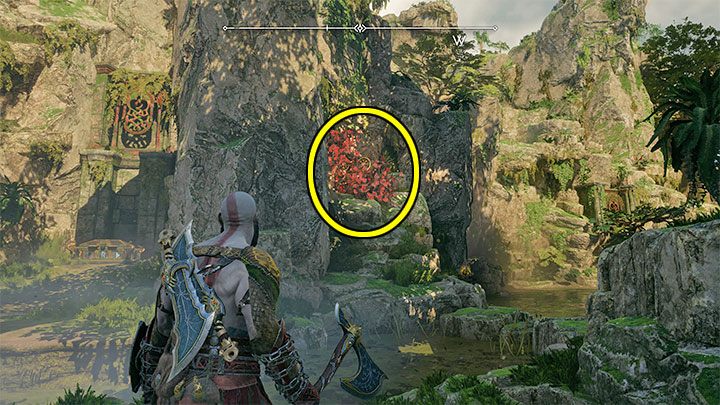 You will find shield 2 to the right of the chest. You need to destroy the red vines marked in the picture - create several seals and set the one closest to you on fire with your Blades. This will unlock access to the rotary mechanism. 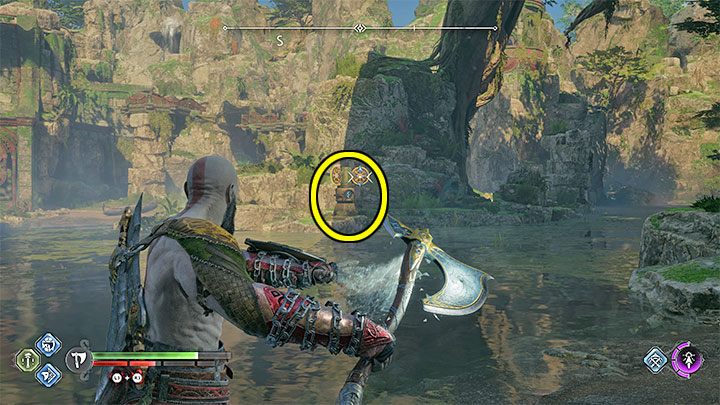 Shield 3 forces you to return to the boat and reach the shop north of the Nornir Chest. After leaving the boat, locate the rotating mechanism on the opposite side of the river - it is marked in the picture.