On this page of the guide you will find information about weapons and shields available in God of War Ragnarok - Leviathan Axe, Blades of Chaos, and Draupnir Spear. We also explain upgrading weapons, what Spartan Rage is, and how to unlock and upgrade Relics.

Kratos' first main weapon that is capable of dealing melee and ranged damage. Leviathan Axe has the power of ice, allowing the player to freeze enemies and expose them to attacks. 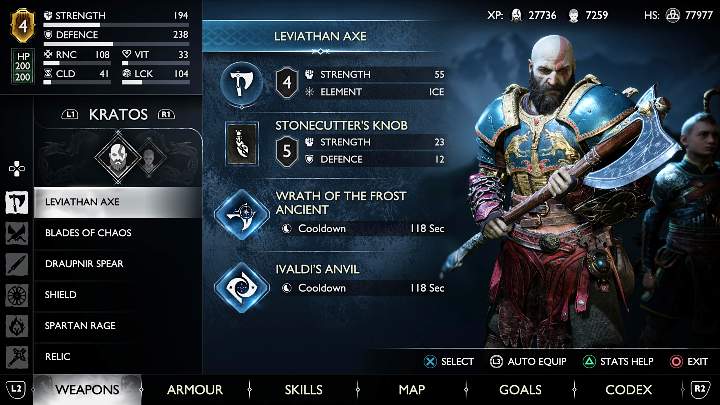 You can assign two runic attacks to the weapon - light and heavy. In order to be able to use these attacks, you need to charge them first and activating them produces certain results. You can upgrade runic attacks by spending experience points amassed by Kratos.

Blades of Chaos is the series classic, known to all fans of the previous God of War installments. These chained blades can inflict damage on multiple enemies simultaneously while Kratos stays at a distance. Moreover, the Blades can set enemies and objects on fire. 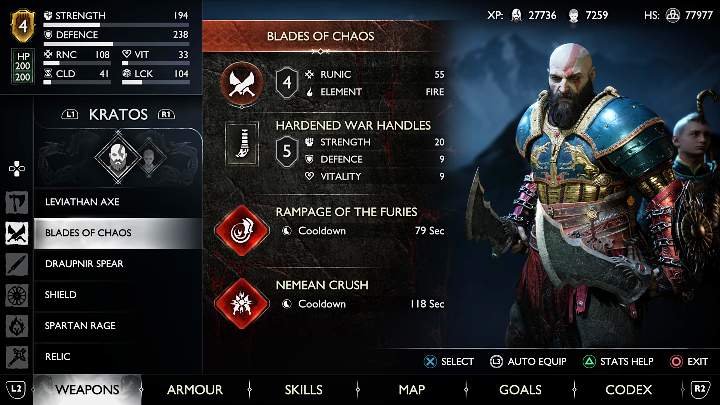 With Blades of Chaos, similarly to the Leviathan Axe and the Draupnir Spear, you can install and use 2 runic attacks - light and heavy.

The Draupnir Spear is Kratos's final main weapon which is unlocked later in the story of God of War Ragnarok (more on the topic in How to unlock the Draupnir Spear? page of the FAQ chapter) The spear is imbued with the power of wind, which will come useful when attempting to reach seemingly inaccessible areas. 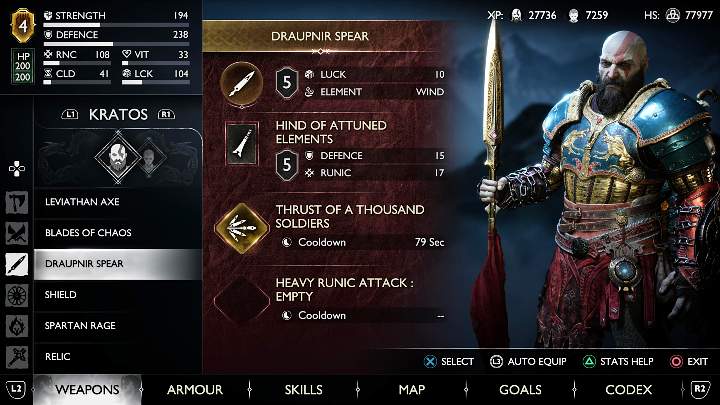 When it comes to battles, the spear can be used both in melee and ranged combat. As with all main weapons, you can add and use runic attacks. 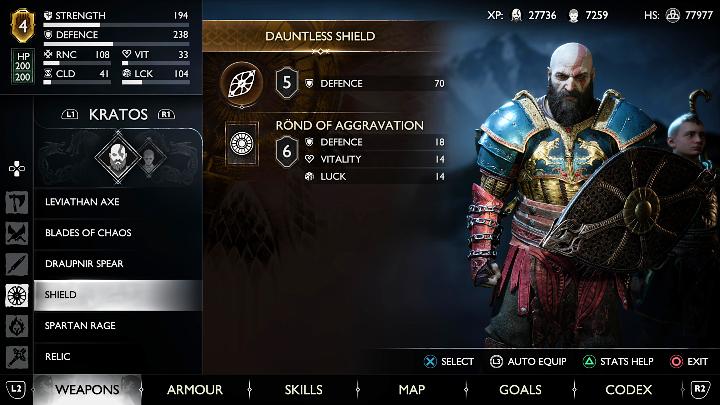 In God of War Ragnarok, shields have multiple functionalities - not only defense but also stunning enemies or attacking if Kratos doesn't have any weapon equipped. Shields in God of War Ragnarok can be equipped with special attachments that increase Kratos' attributes and can offer additional effects. 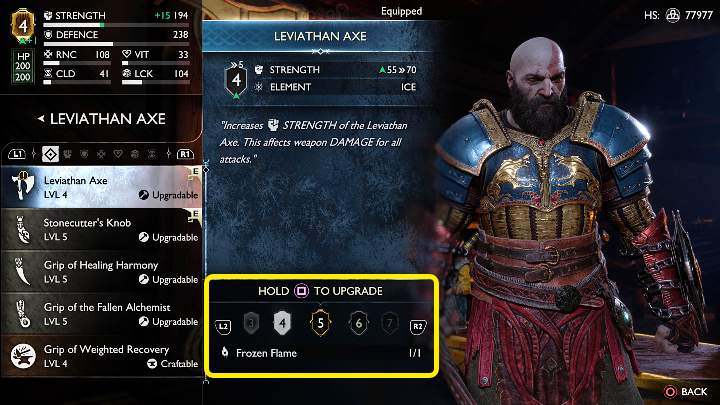 Upgrading weapons require certain rare crafting ingredients which are obtained as you progress and explore the world of God of War Ragnarok. 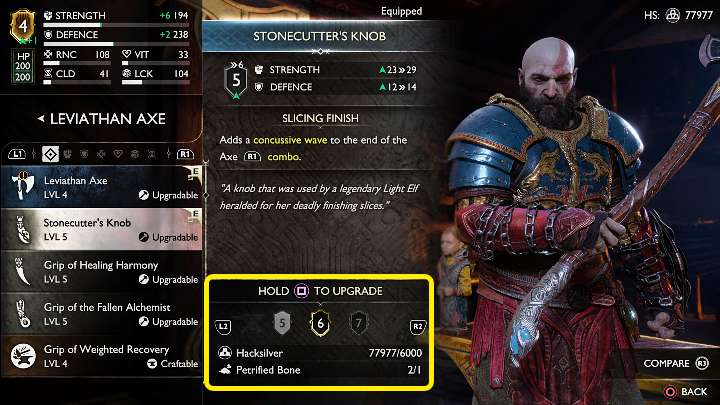 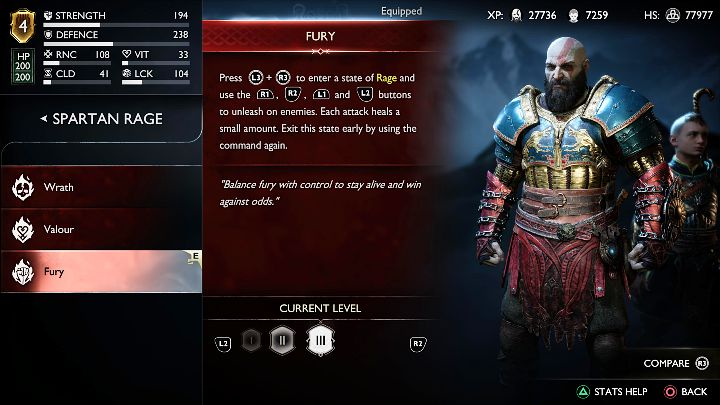 At the beginning of the story, Kratos has only one version of Spartan Rage at his disposal, but further two will be unlocked with your progress in the main storyline.

Remember that you can deactivate Spartan Rage at any moment by pressing the appropriate buttons again (L3 R3 by default). However, it should be noted that deactivating Spartan Frenzy uses a bit of the rage bar. 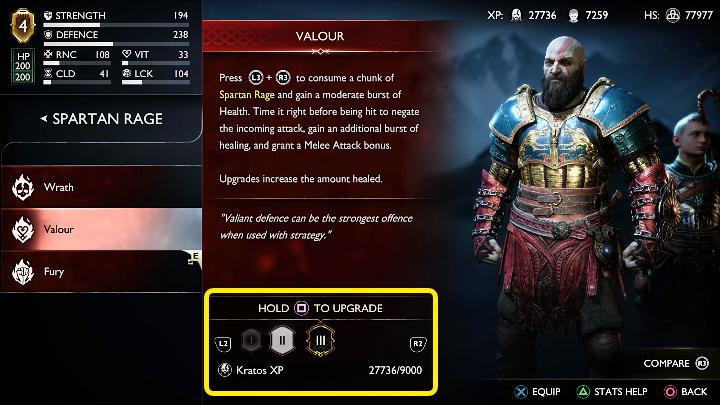 Each variant of Spartan Rage can be upgraded to a maximum of level 3 by spending experience points.

Relics are special items that can be activated to trigger an additional effect. For example, Hilt of Gram replenishes Rage and stuns nearby enemies, Talisman of Meign provides a melee damage bonus for a short period of time, while Hilt of Ridill unleashes a wave of lightning that deal damage to enemies. 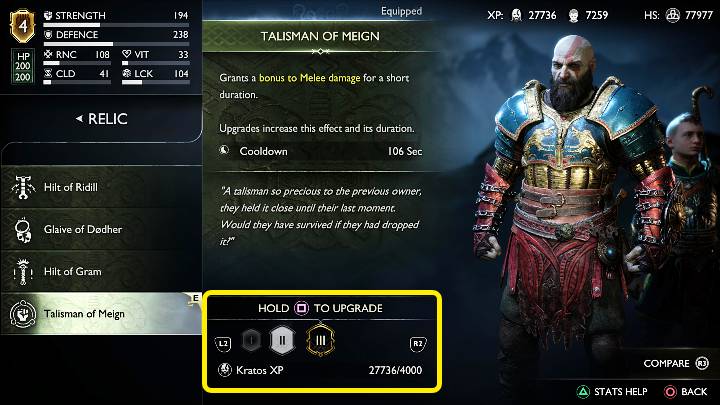 Relics can be upgraded to a maximum of level 3 using Kratos' experience points.