Thor is the penultimate boss of God of War Ragnarok - the encounter takes place during The Realms at War story quest which is the finale of the story taking place in Asgard. Our guide explains all boss' attacks in detail. You will also learn how to properly damage the boss and how to win wrestling scenes.

The first battle with Thor, which takes place at the beginning of the story, is described in detail on Thor page of our guide. 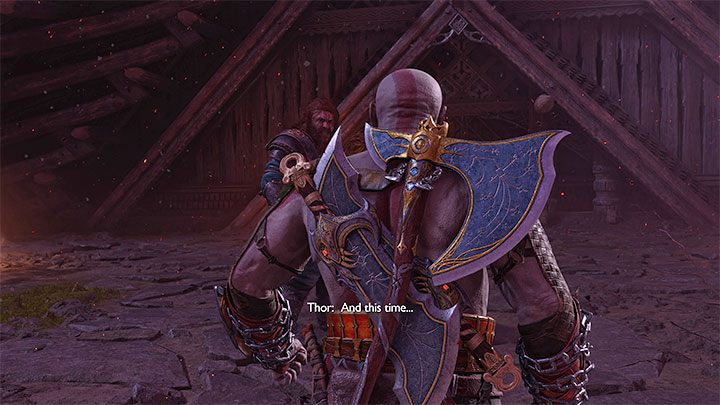 The second confrontation between Kratos and Thor takes place in the finale - in the course of The Realms at War story quest.

The fight will occur specifically after reaching The Great Lodge of Asgard. 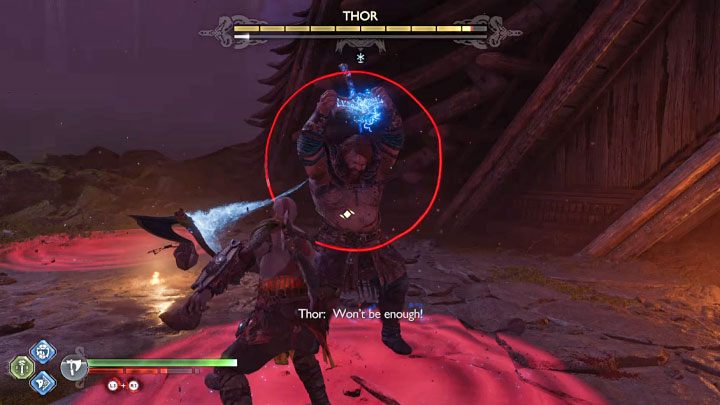 Thor has one long health bar, and the battle is divided into 3 phases.

One of the red attacks involves Thor hitting the ground - stay away from the red circles which mark the range of the attack. Take advantage of the fact that Thor is standing still during this attack - you can get close to him and deal damage. 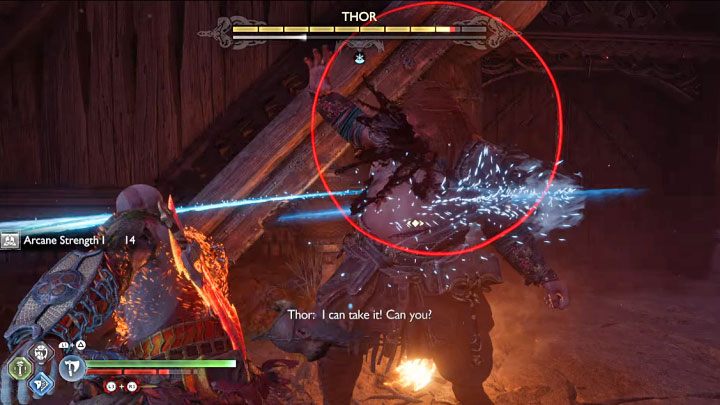 Thor can use melee attacks, mostly regular ones. However, one of them is a red attack in which Thor attempts to grab Kratos. Dodge to avoid being caught. 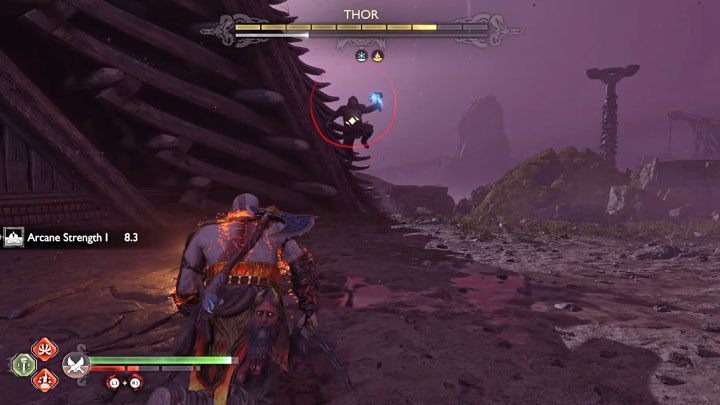 Thor can attack you with Mjolnir, or red lightning attacks: 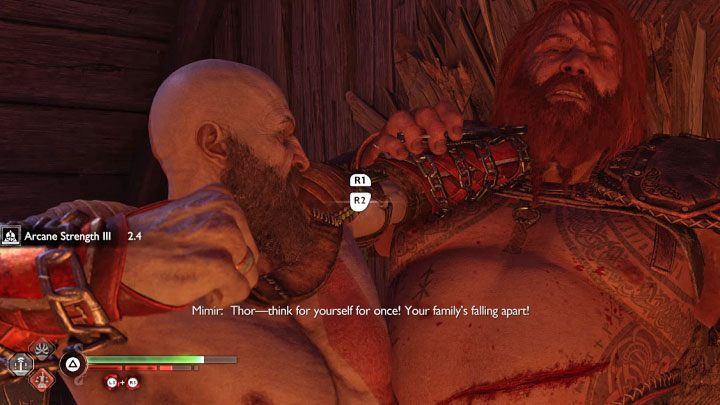 Be sure to respond back with your attacks after you avoid Thor's move. Rely on unique attacks and Spartan Rage (if you've equipped its offensive variant).

After Thor loses about 3 chunks of his health bar, he will grab Kratos - you can't avoid this move. During the wrestling scene, press R1 or R2 to hit the boss. After Kratos throws his blade at Thor, press X quickly. 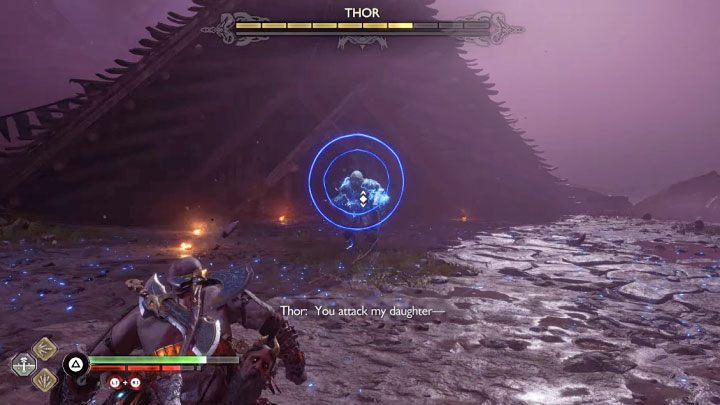 Novelties in the second phase include a blue attack - to interrupt it, run up to the boss quickly and hit him with shield (L1x2). You can throw a few attacks of your own in the follow up.

Thor now can perform melee combinations e..g red followed by yellow, then red. The safest thing to do is to avoid each one, as you can easily make a mistake and try to parry a red attack. 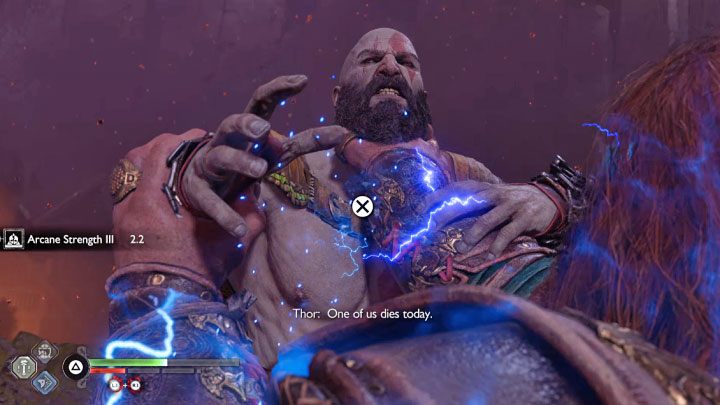 Reach the point where Thor has about 4 health bars left. A new wrestling scene will be activated. After Thor starts choking Kratos, press X in rapid succession so the hero can break free and thrust his spear into the boss. 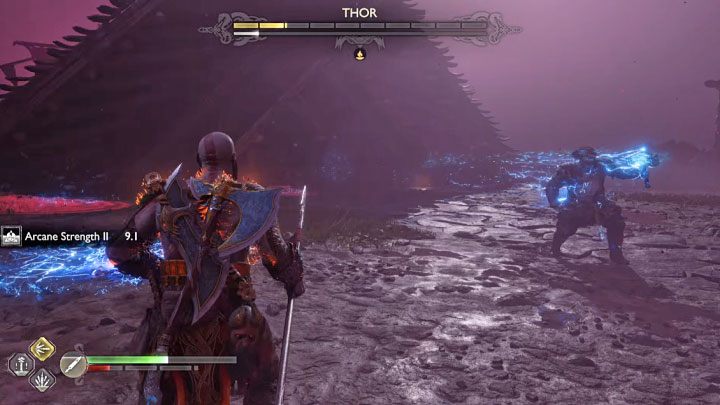 Be ready to avoid Thor's hard landings - jump away from the red circle that shows where he will land. You can attack the boss right after he lands, as it will take him a while to resume attacking.

Thor can teleport more often and, for example, attack you right after he reappears. Dodge quickly and successfully. 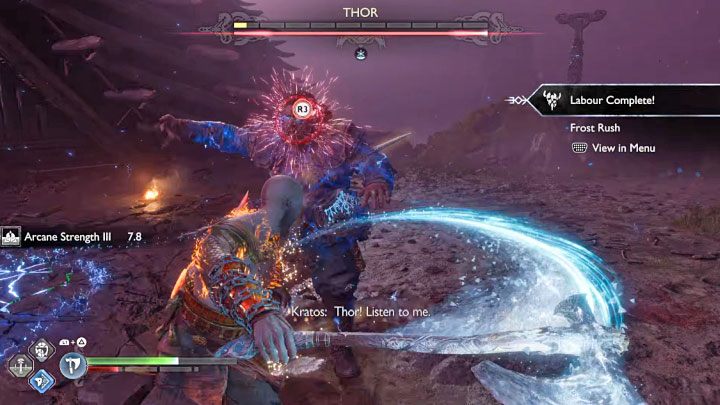 Fight until an opportunity to grab the stunned boss appears - once that happens, run up to Thor and press R3.

During the wrestling scene, press R1 or R2 to attack Thor with the Leviathan Axe. One of these attacks will put an end to him.