A giant snake Nidhogg is the main boss of The Reckoning quest in God of War Ragnarok. On this page of the guide we supply instructions on how to defeat the creature - we explain what types of attacks the Nidhogg has and how to safely avoid them, as well as how to deal damage to it during every phase of the fight (there are 3 of them). 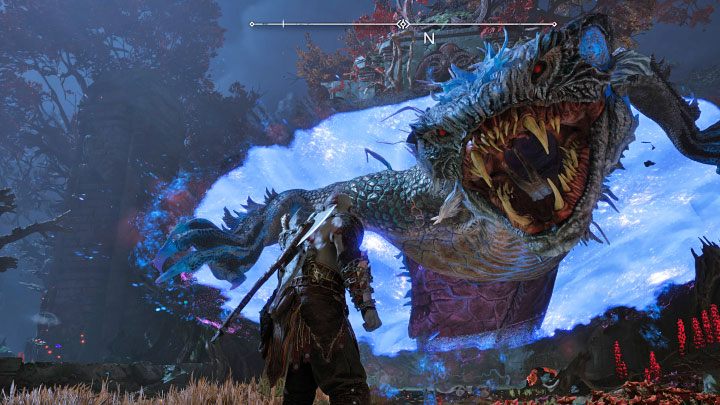 Nidhogg is a huge snake-like monster and one of the main bosses of God of War Ragnarok. The battle against him is long and challenging. It takes place in the final phase of The Reckoning, a main quest in which the heroes explore Vanaheim.

The battle takes place after reaching large ruins in the north-western part of the map, in the Abandoned Village region. 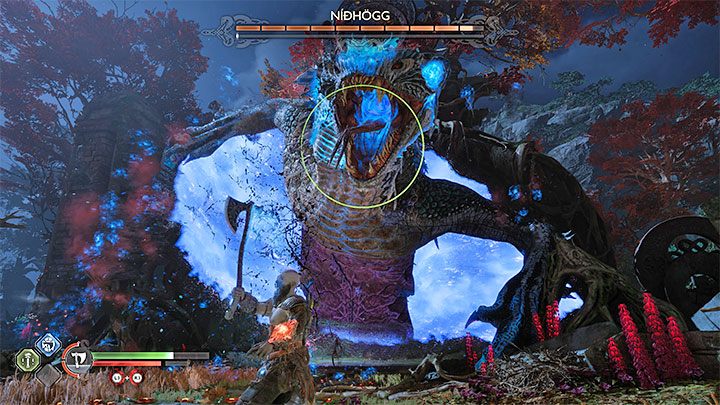 Nidhogg health is displayed in form of one long energy bar, but at certain points in the battle, you'll advance to its new phases and the boss' repertoire will change.

The snake uses the yellow maw attack very often. Attempts to parry it may be problematic, so it is better to dodge to a side. Fortunately, this attack is telegraphed well in advance and you have time to react.

Another yellow attack involves Nidhogg pounding the arena with its upper limbs. Again, we recommend dodging to the sides. 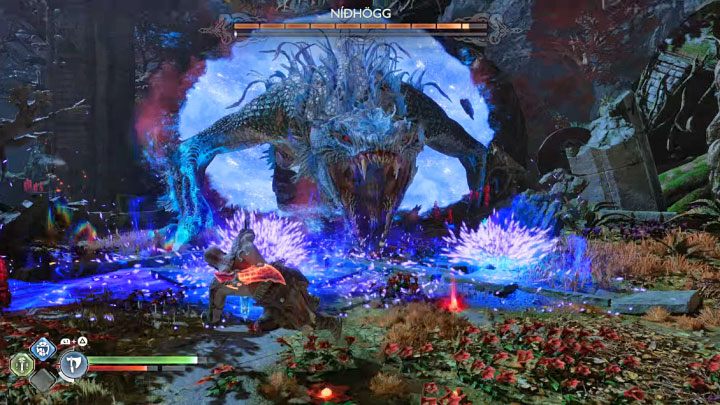 One of the more dangerous moves is a red attack that generates a bifrost field in front of the boss. You must dodge backwards in time so as to not receive damage and avoid the bifrost debuff (it may cause explosions if the hero is struck again). 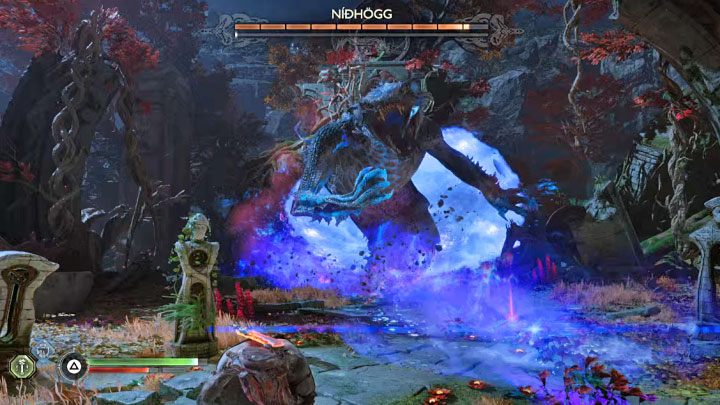 Good dodging skill is required with a red attack that sends bifrost waves. Boss telegraphs it by raising the left or right limb, which will be used to generate the wave. Once you get wind of the attack, run sideways and be ready to make a dodge to lower the chances of being struck. 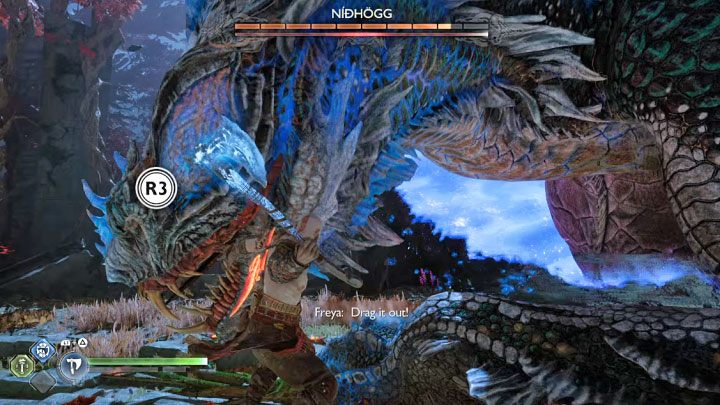 You can damage the boss by hitting its head - try to get closer to the head every time after one of the more powerful attacks.

Nidhogg, after receiving enough damage, will be stunned - when that happens, run up to the snake and press R3 (right analog stick) to launch a strong attack - Kratos will grab the boss with chains and start jerking him around. 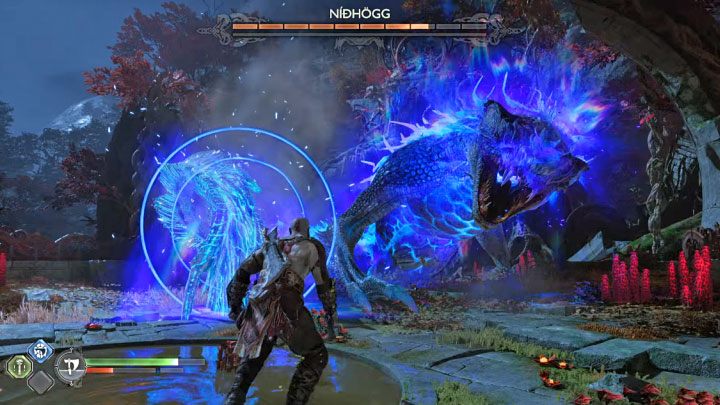 As the battle progresses, the boss will start to use tail attacks and it is specifically a blue attack that pounds his tail in the ground. To counter it, you must quickly run up to the boss and interrupt the charging process - press the L1 button two times to hit the boss with the shield.

A successful counter will stun the boss for a few seconds, allowing you to respond with your own attacks. Failing to counter will generate a shockwave that deals considerable damage and places a negative bifrost effect. 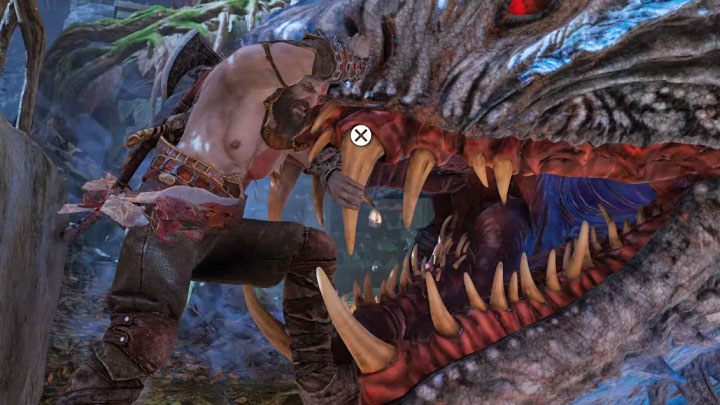 From now on, Nidhogg will send two waves when using his upper limb attack (red attack). This means you have to perform two dodges in a row.

After the boss loses about 4 fragments of his health bar, he will grab Kratos and you have to wrestle with the beast - press X in rapid succession. After Freya's attack, the second phase of the encounter begins. 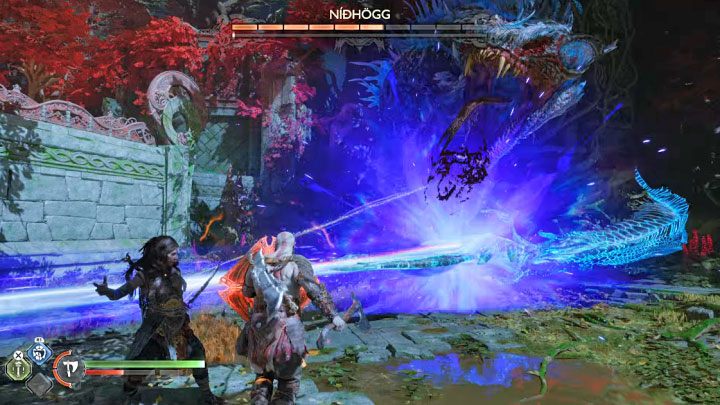 From this point on in the battle, Freya will assist you in battle, but it will be mainly up to you, however, to further deplete the boss's health bar.

Nidhogg will start using ray attacks - horizontal and vertical. These are regular attacks, so you can hold down the block button and avoid damage. It is also easy to dodge sideways during vertical attacks. 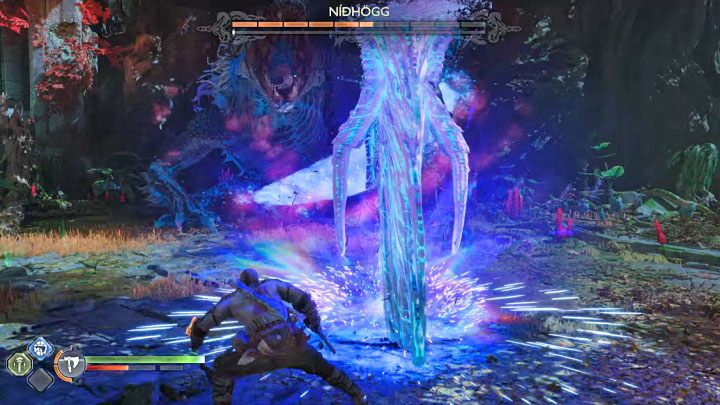 The boss will start using a red attack that involves driving blades into the ground - they will appear at gaps generated by the snake. To counter, you must quickly get away from areas which Nidhogg plans to attack. The boss can launch up to 3 of these types of attacks in a row, so be ready after the first dodge for possible follow-up attacks. 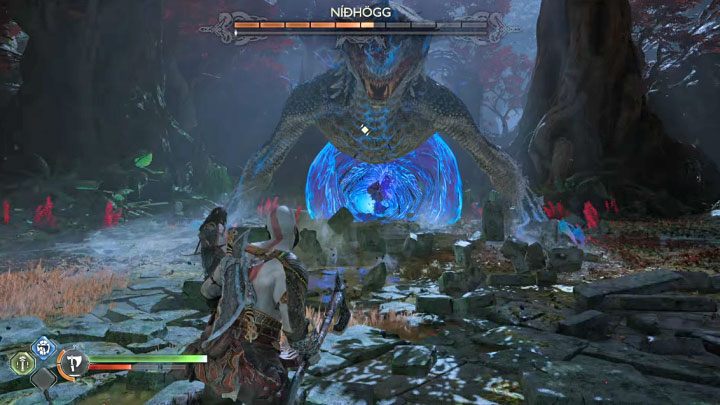 Another of the boss's attacks is to absorb objects from the arena. Don't get sucked in and run sideways.

Nidhogg's new yellow attack involves firing projectiles from his tail. This one is best dealt by dodging. 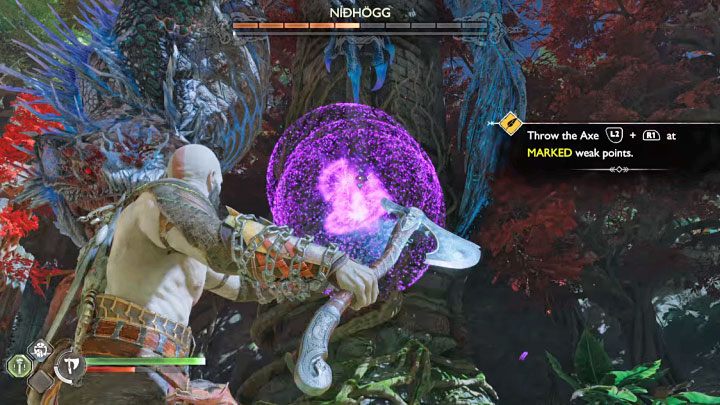 At some point during the fight, Freya will tell you to target the seals she creates. Throw the axe at the seal and it will detonate. A successful throw should knock the boss off the tree around which it is wrapped. 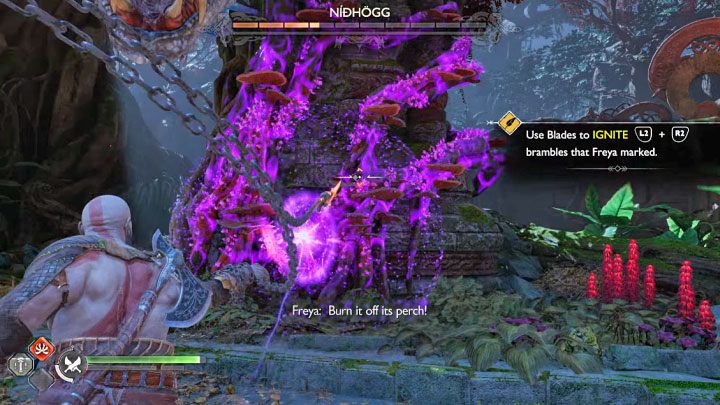 Freya will eventually create a new set of seals, but this time they have to be hit with Blades of Chaos. Hitting this set will set the lower part of the tree on fire.

Keep weakening the boss until he has only 1 health bar. Nidhogg will fall into the arena - run up to him and press R3. 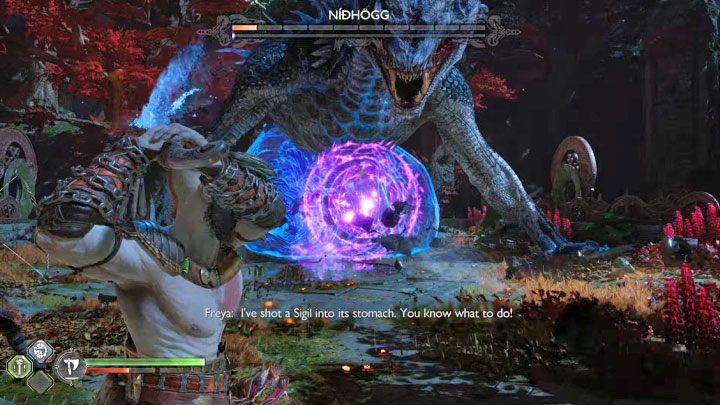 You've made it to the final part of the confrontation, and after a cut-scene depicting a joint attack of Kratos and Freya, you need to deal with the last part of the health bar.

In the final phase, NIdhoggs attacks are even more powerful and fierce - e.g. you need to avoid a few bifrost waves in a row. Freya will form a seal next to the monster's belly - throw the axe at it. This will stun the boss and open him up for standard attacks. Finish up and press R3 for the final time - the snake will be executed.