In the main quest Old Friends in God of War Ragnarok, you will return to Midgard and play as Atreus. The walkthrough tells you how win battles as Atreus, how to get to the meeting point with Jormungandr, where to find Freya's camp, how to return to Sindri's house and how to unlock the Mystic Gateway to Alfheim. 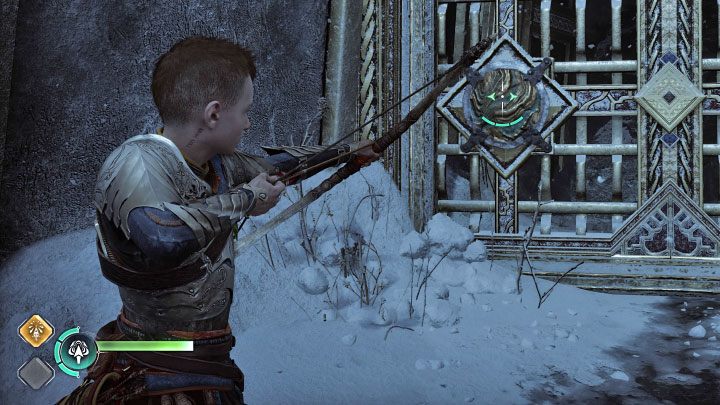 Atreus becomes a playable character in this task and is accompanied by Sindri. Reach the Mystic Gateway next to the Sindri's house - you will move to Midgard, specifically to the Shores of the Nine.

You will reach a closed gate - hit its green seals with sound arrows. Unlock the tight passage. 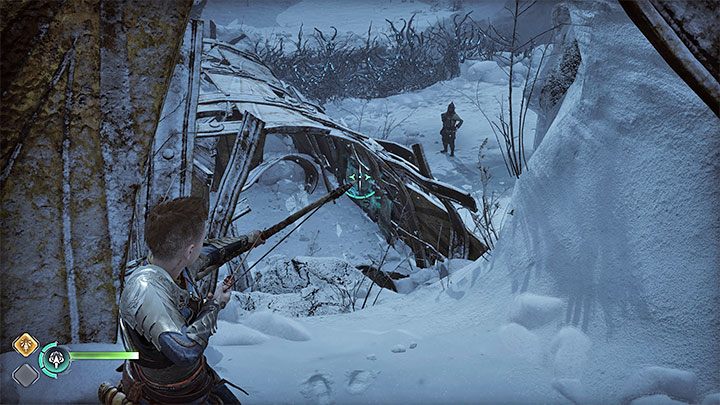 You will come across a bigger obstacle. Start by hitting the green objects on the left with the sound arrow.

You must now stand somewhere where you can see the obstacle from the other side. Hit the green objects in the picture. Return to Sindri and pass through. 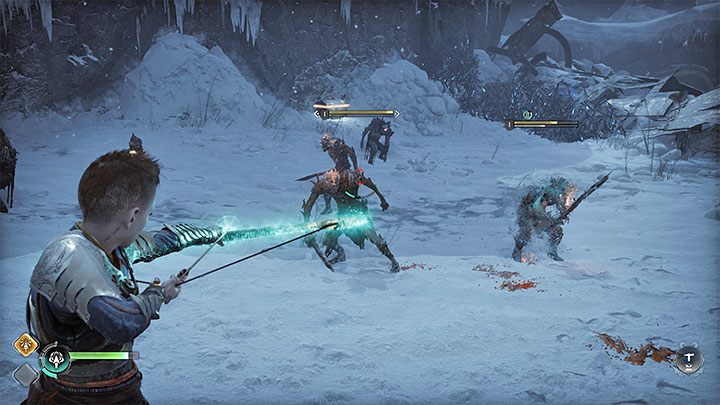 You will enemies as Atreus for the first time. During battles, the boy can shoot the bow, as well as a melee weapon (in both cases, you can use fast and charged attacks). You can also block attacks (L1) and activate special bow attacks (e.g. L1 and R1, but they have a cooldown after each use).

Sindri can help you in fights - ask him for help by pressing Square. Atreus can stun enemies more often than Kratos - run up to them then and press R3 to either kill them or deal heavy damage.

After winning the battles, you will reach the elevator and Atreus will summon Jormungrandr. 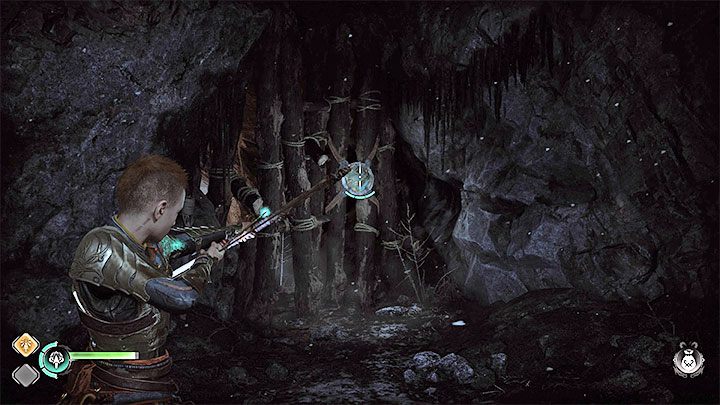 Approach the big gate and press X rapidly to try to open it. Along the way you will be attacked by new monsters - you can attack them from a distance when they are not yet moving. During battles, you can shoot red jugs and make them explode.

After the battle, explore the dark area to find a green seal. Hitting it with a sound arrow will unlock a new passage. 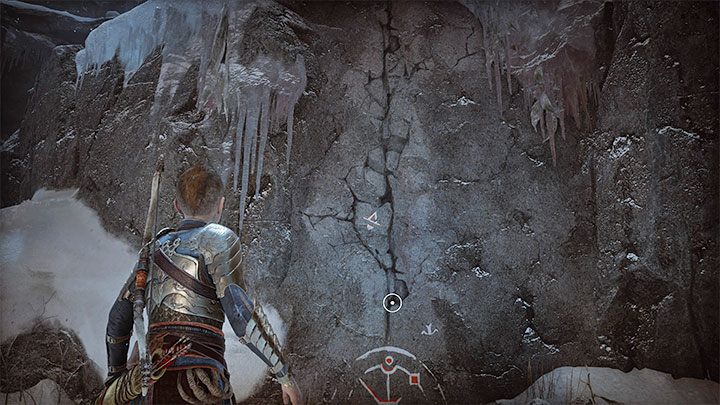 When you reach the new location, the game will unlock more skills on Atreus' skill trees - you can buy them with XP. Sindri will stay here - you will go on alone.

Reach the vertical wall and start climbing. Grab the edges and move sideways. On one of the shelves, quickly hit the red jug to will kill the monster that attacks from a distance. 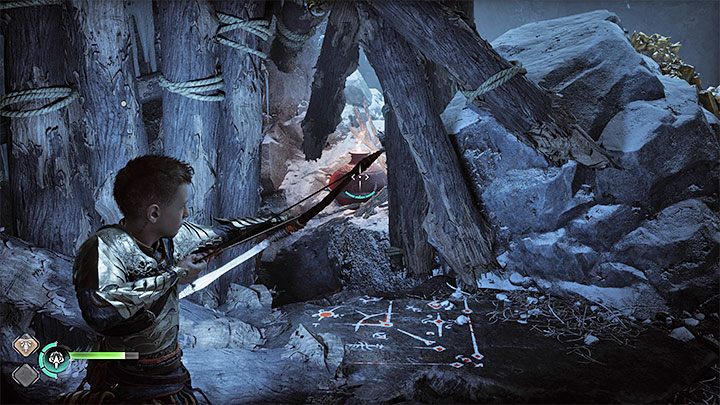 Reach the narrow entrance to the cave. Barricades will appear in new locations - hit green objects with your bow and look for red jugs. Detonating them with arrows can destroy yellow crystals and unlock passages.

During some climbs, you have to jump to adjacent edges - face them and press X when the button prompt appears on the screen. 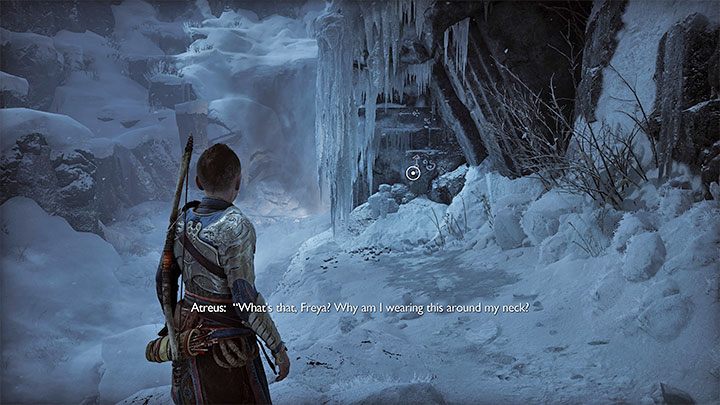 You will also encounter Nightmares in the caves, which attack from a distance. Remember about destroying structures (green supports) and dropping explosive jugs.

You will reach a ledge above Sindri - you can optionally call out to him and throw a snowball at him. Go forward. Keep moving to the left by grabbing the ledges. You will reach Freya's camp. 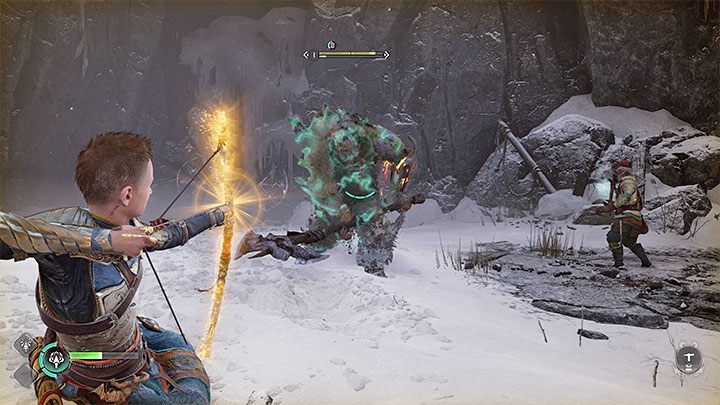 After meeting Freya, climb the chain to the top. Open the large chest - it has a bow upgrade. Reach the barricade in the cave and destroy it with a sound arrow.

You will return to Sindri. The conversation with him will be interrupted by a larger monster. Use the dwarf's help (throwing bombs) and keep the beast at bay. Defeat all the monsters and leave the place by reaching the rift.

On the way back, you have to fight more battles and use the elevator again. Approach the Mystic Gateway and go through it to return to Sindri' house. 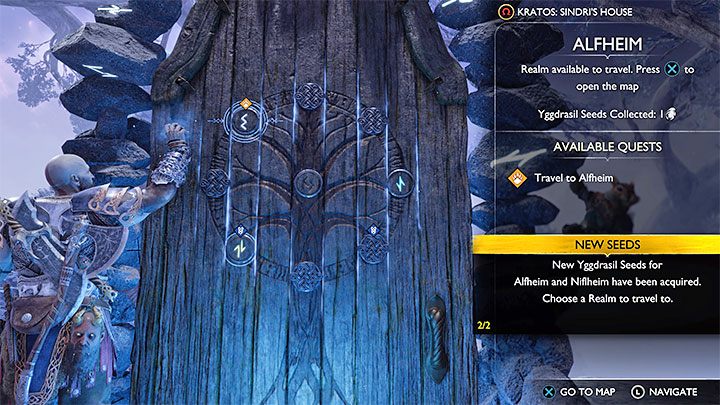 You will return to playing as Kratos. Head to the Mystic Gateway. Ratatoskr will appear - you will learn about the favor (side quest) and receive Yggdrasil Seed.

2 new realms will be unlocked: