You will face Gryla - Angrboda's grandmother - during a visit to Jotunheim in the main quest The Lost Sanctuary. The walkthrough explains how to destroy the rune cauldron held by Gryla, as well as how to deal with the boss's attacks and how to escape from the dangerous red zones. 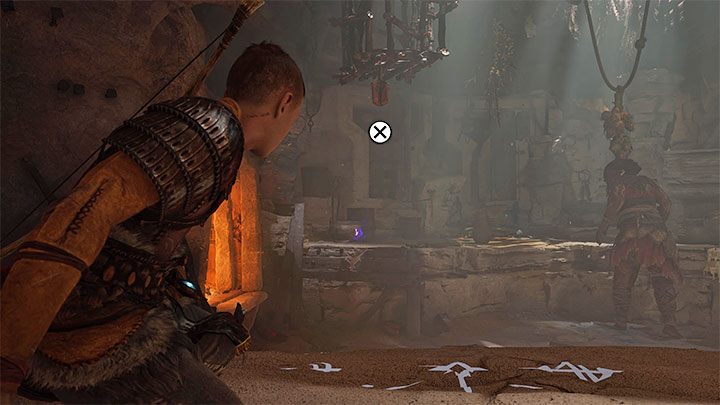 Gryla is Angrboda's grandmother. You fight her to save the wolf she captured. You can defeat Gryla by destroying her cauldron, and you will deal with this in The Lost Sanctuary main quest in Jotunheim.

Atreus, who is a playable character for the duration of his first visit to Jotunheim, will fight Gryla. You must first complete the sequence of hiding from Gryla, and then return to the location with the cauldron and grab the hitch to reach it. An energy bar will appear at the top and the actual fight will begin.

How to destroy the cauldron held by the boss? 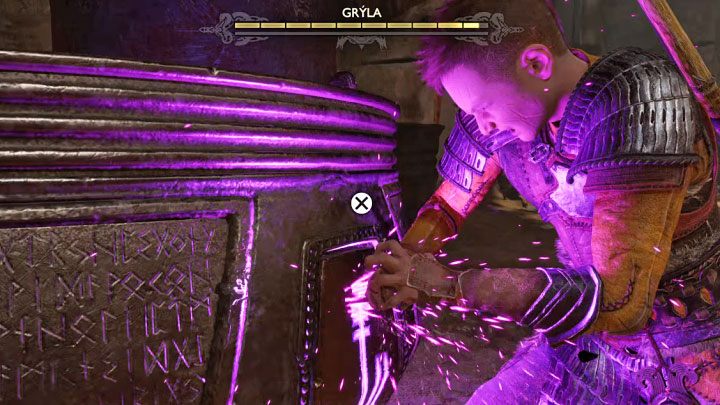 The health bar on the screen is for the cauldron, not Gryla, because getting it destroyed will become your priority in this battle (not defeating the giant woman).

Atreus will start by thrusting the blade into the rune on the cauldron and you must quickly press X. This will get Gryla's attention. She will not allow you to easily damage the cauldron. The woman will take it away and start covering it. 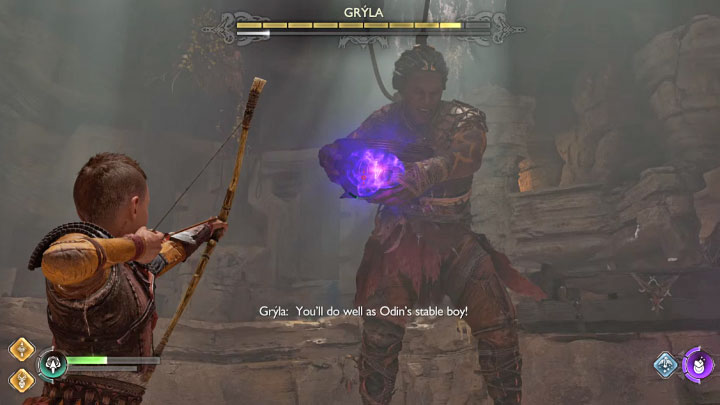 During the fight, you must wait until the rune on the cauldron is exposed for a brief moment. Quickly use the bow to hit it.

The cauldron can also be attacked when it has a covered rune, but then its bar will decrease very slowly. 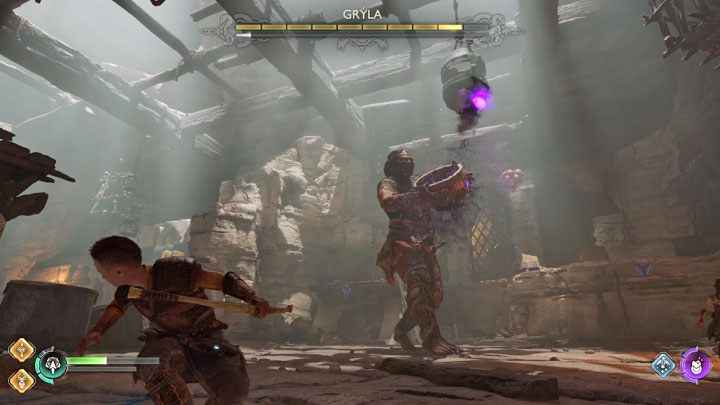 During the fight, in addition to attacking the cauldron, you must also avoid Gryla's attacks. Watch out for her attempts to crush Atreus with her legs - stay on the move and be ready to dodge.

The boss's yellow attack is to shoot out purple projectiles out of the cauldron, and the safest thing to do is to dodge to the side. 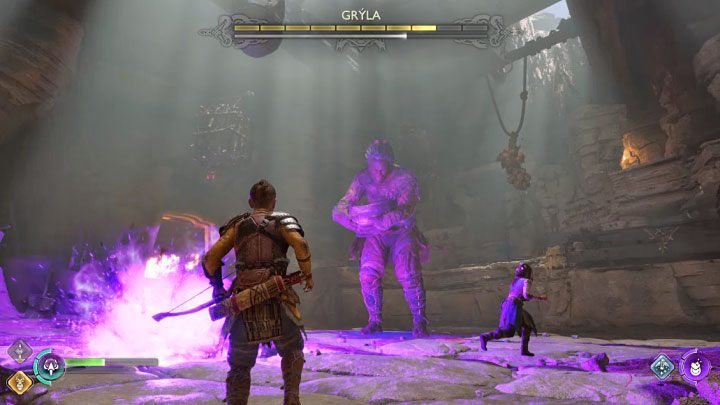 The red attacks a larger area and you can think of it as a stronger variation of the yellow. As soon as you notice that Gryla is preparing to attack, start running away. The projectiles, after landing on the ground, explode after a while. 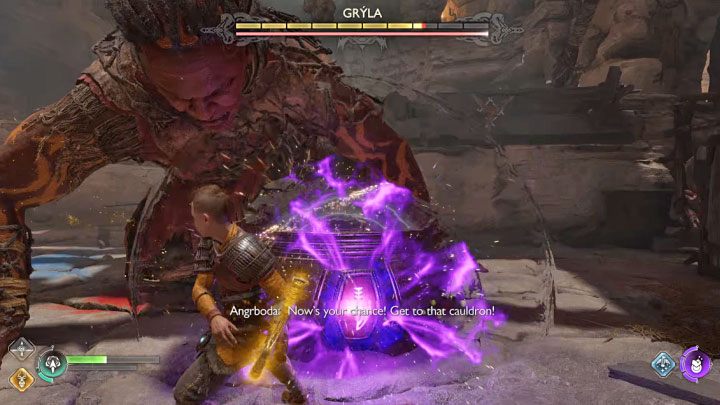 Gryla may drop the cauldron temporarily - use this opportunity for melee attacks. Hit the cauldron with Atreus' bow instead of aiming at it from a distance. 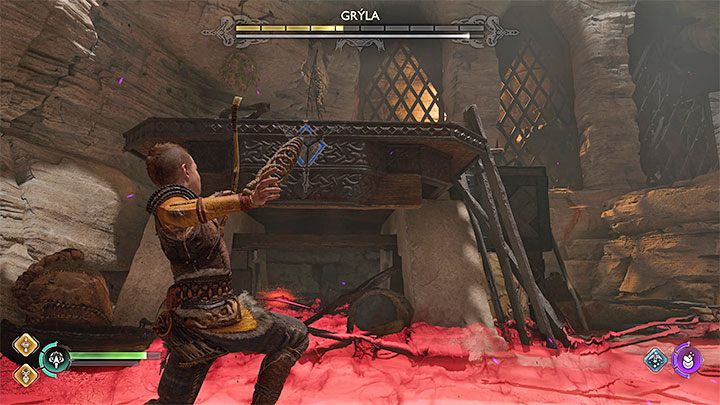 At certain points in the battle, the ground will light up red - a warning of a larger area attack: 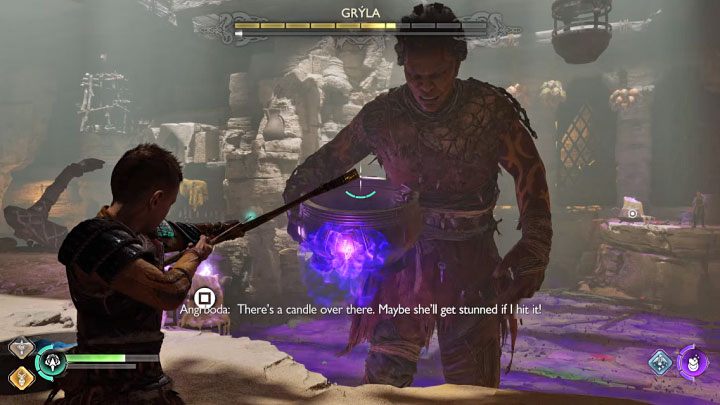 When fighting on the upper level, you theoretically have less room for action, but you can grab onto interactive hooks and use them to move to other places.

There are candles in the area and you can ask Angrboda to hit them (Square). Wait until Gryla is close to the candle to stun her for a while and then attack the cauldron again. Do this also when Gryla turns her back on you - hitting a candle can stop this. 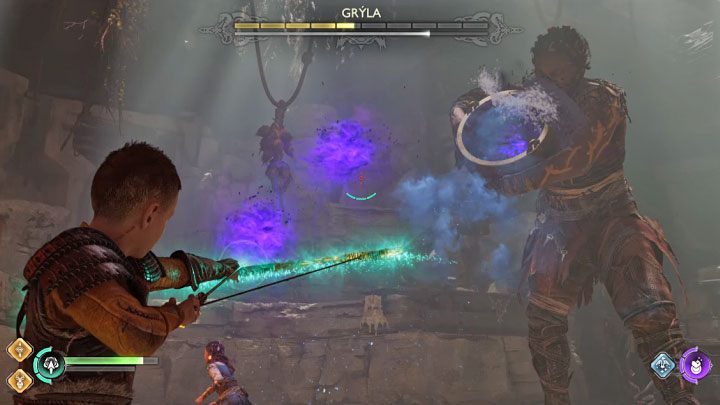 Gryla will start using a new type of yellow attack - release homing purple projectiles. Use the bow to destroy them right away. Otherwise, they can easily hit you when you are busy with other activities. 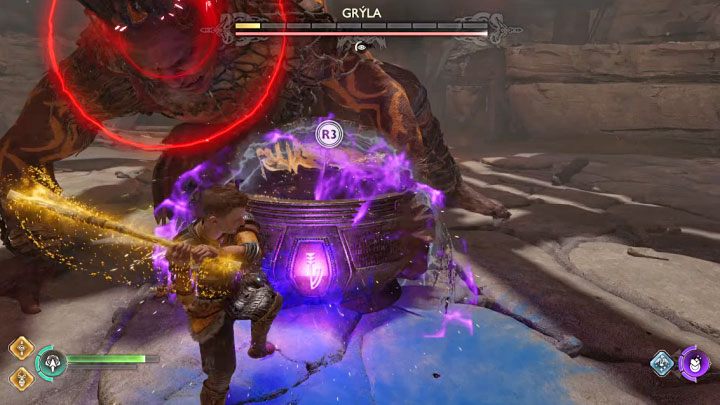 At the very end of the fight, Gryla will drop the cauldron for the last time. Wait until the R3 icon appears - then press X rapidly. The cauldron will get destroyed.

You don't have to continue fighting Gryla. Watch a new cut-scene and leave the place with Angrboda.