God of War Ragnarok has many mini-bosses and on this page of the guide we have included a description of the fight with Dreki. We explain when you encounter this monster for the first time, what Dreki's attacks are and how to avoid them, as well as how to defeat the creature. 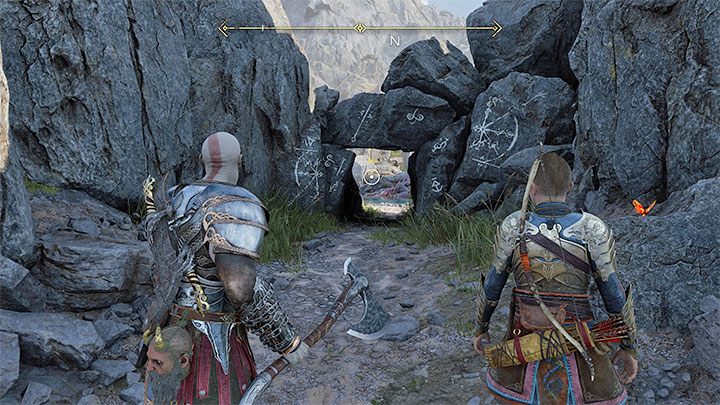 Dreki is a creature that resembles a large lizard and is one of the game's mini-bosses. The first fight with Dreki happens during The Quest for Tyr mission.

After you reach the Forge in Svartalfheim, you need to go under the rocks from the picture above. You enter the arena where you will face the creature.

Later in the game you may encounter more monsters of this type. The tactics for fighting them will be the same.

Description of the boss battle 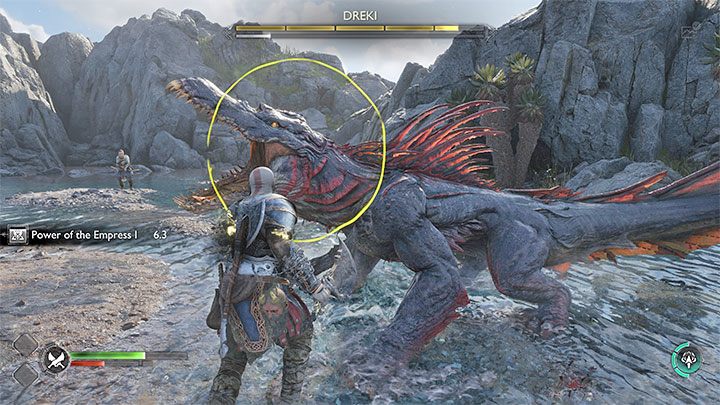 Dreki uses primarily melee attacks. You can block most of them, but be careful because some of them are yellow attacks.

Blocking them can break down Kratos' defense and expose him to further attacks. It is safer to make a quick evade. 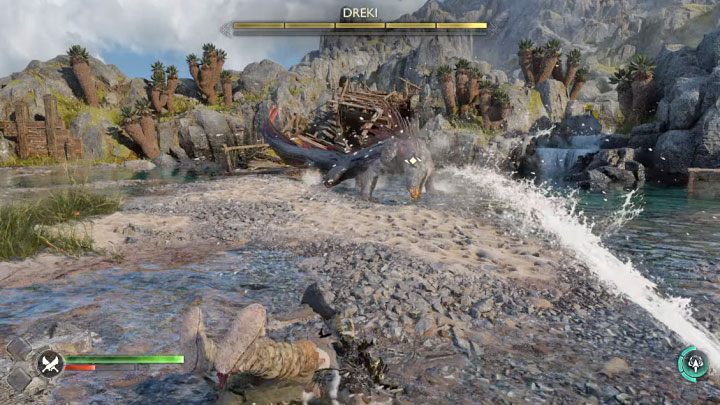 The boss can also attack from a distance - he will spit projectiles. Evade them to the side. 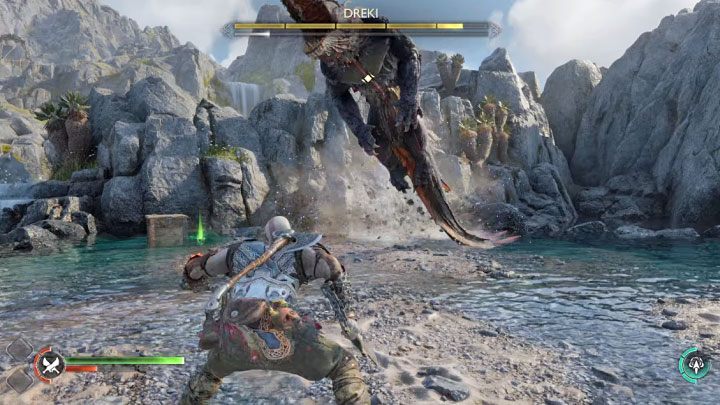 One of Dreki's yellow attacks is a long jump. It is fortunately telegraphed in advance - you can easily dodge to the side. 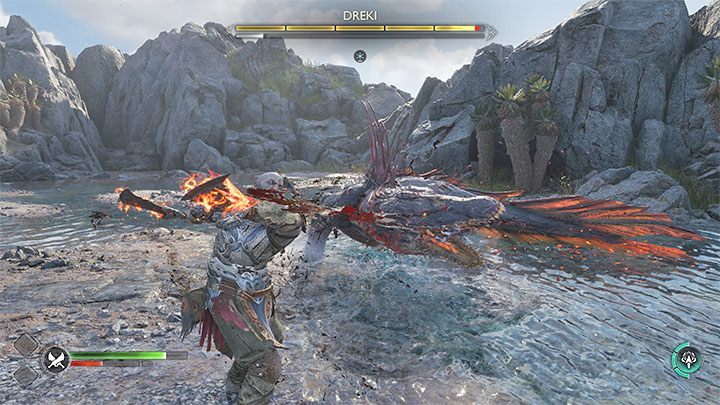 Wait for the enemy to finish his attack and go on the offensive. Dreki is an agile monster and it is better, in our opinion, to use fast attacks. Heavy and charged attacks can miss or get interrupted. 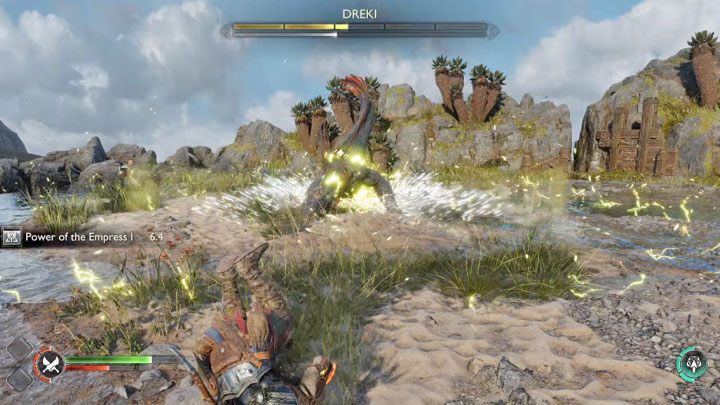 After Dreki loses about half of his health bar, he will start using new attacks. His red attack where he charges up and releases energy is dangerous. As soon as you notice that the boss is preparing to use it, move away from him to get out of his range. 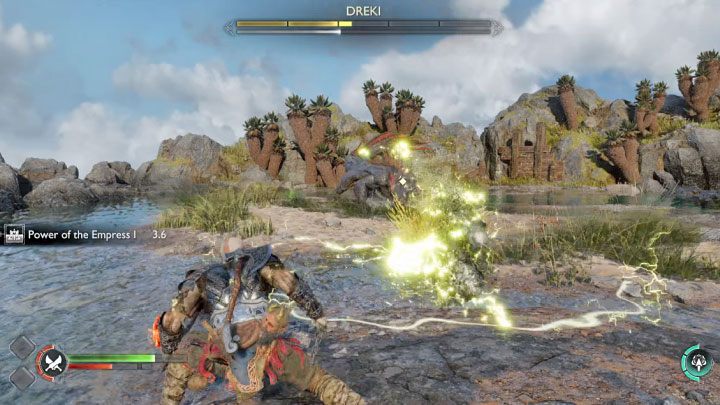 His another red attack is spitting out larger projectiles. They deal damage and inflict a negative status. Evade them to the left or right. 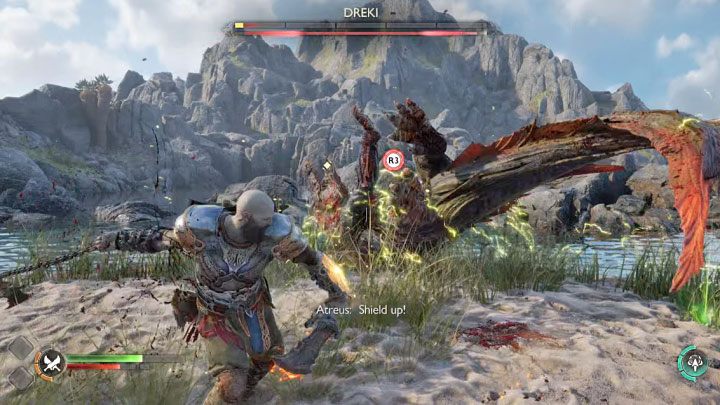 In the arena you will traditionally find green healing items.

After the boss has only a little bit of health left, Dreki will be stunned - you have to kill him. Do the execution by pressing R3 (right analog stick). 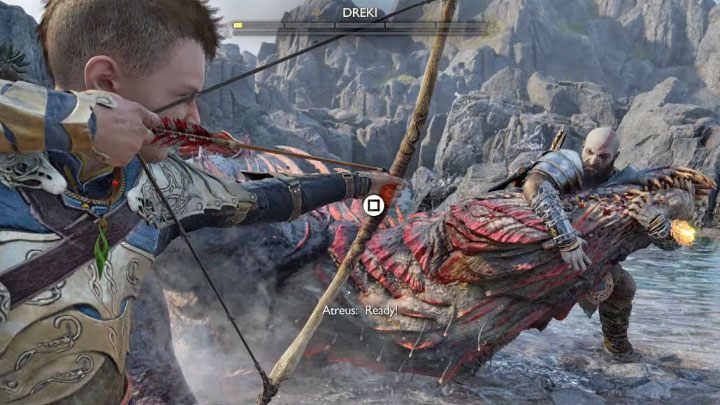 You won't kill Dreki right away, because you also have to do 2 quick QTEs: 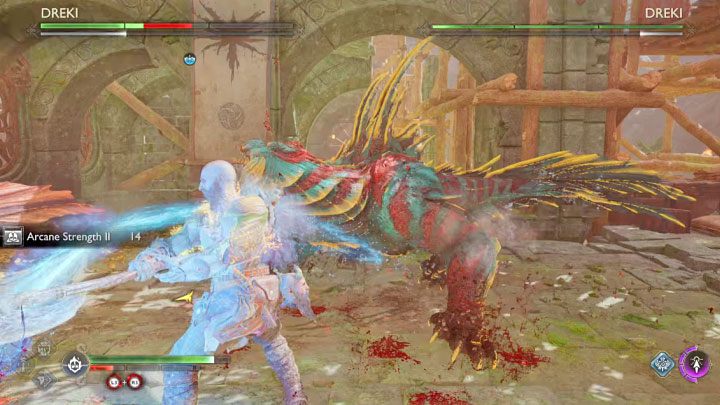 During the Creatures of Prophecy main quest in Vanaheim, you will encounter more Drekis.

This time it will be more difficult - you have to fight a pair of monsters.

Focus on attacking one Dreki. Use as many special attacks as possible and remember about Spartan Rage. This way you will kill one of the monsters as quickly as possible. 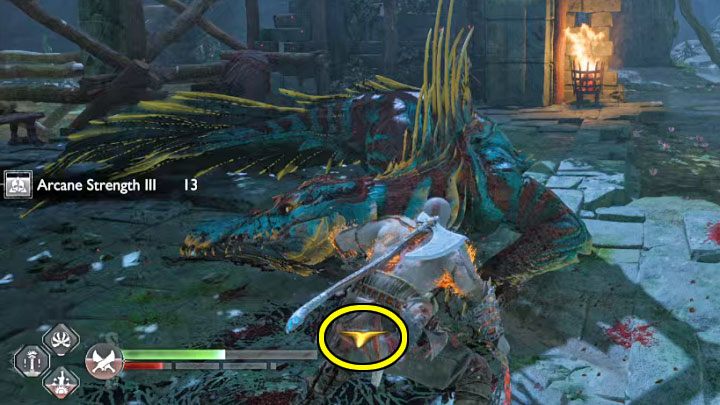 During the fight, watch the arrows appearing next to Kratos (we've highlighted an example in the picture) and listen to Atreus' comments. They inform you that the other boss is about to attack. Evade those attacks and continue fighting the weaker monster.