From our guide to God of War Rangarok, you will learn how to defeat Bjorn the bear. This fight takes place during Surviving Fimbulwinter quest. Our description of the boss fight explains what the bear's attacks are, how to avoid or block them, as well as how to defeat the boss. 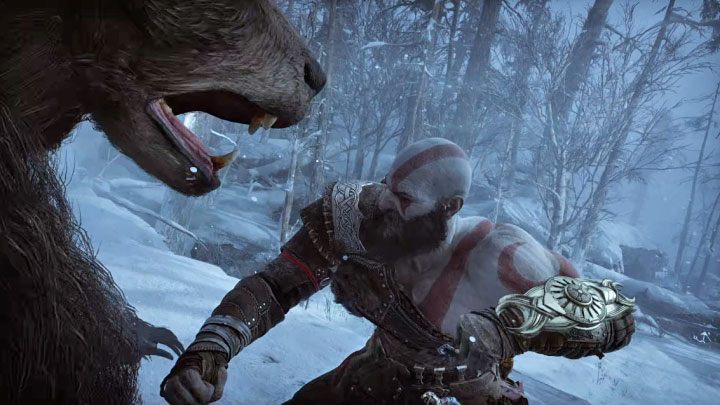 Bear Bjorn is the game's first main boss (not counting the confrontation with Freya at the very beginning, which is just a QTE sequence).

The fight with Bjorn occurs during the Surviving Fimbulwinter main quest. The fight starts while you follow Atreus' footsteps. The fight will begin suddenly after you exit one of the caves.

Boss fight with the bear 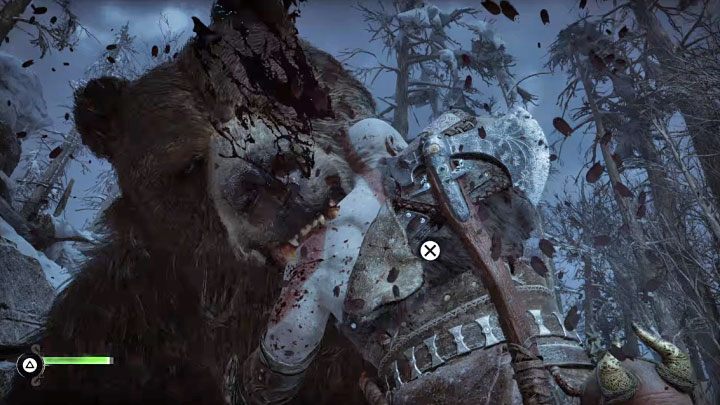 You must start the fight by quickly pressing the X button to free yourself from the bear's jaws.

The same will happen when Kratos gets caught in Bjorn's jaws. 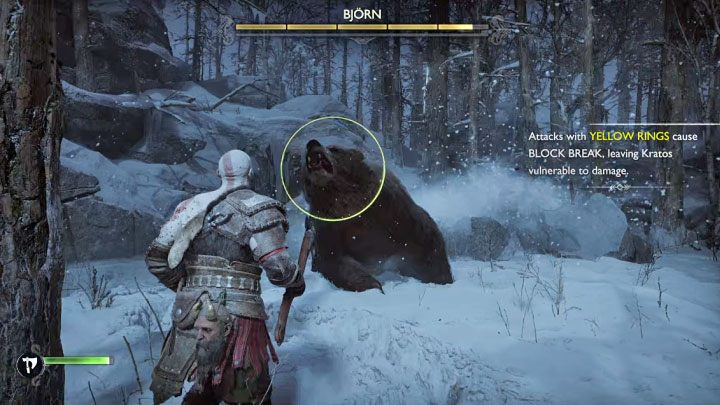 During this battle, you will learn how to deal with 2 types of stronger attacks.

Attacks signaled in yellow can break Kratos' block (activated with the L1 button). Although you have stopped the attack itself , the hero will be exposed to further attacks. You can dodge yellow attacks or, after having your guard broken, quickly jump back.

Later in the game you will learn the Stone Wall skill. It allows you to absorb attacks while holding down the block button and this will also work on yellow attacks. 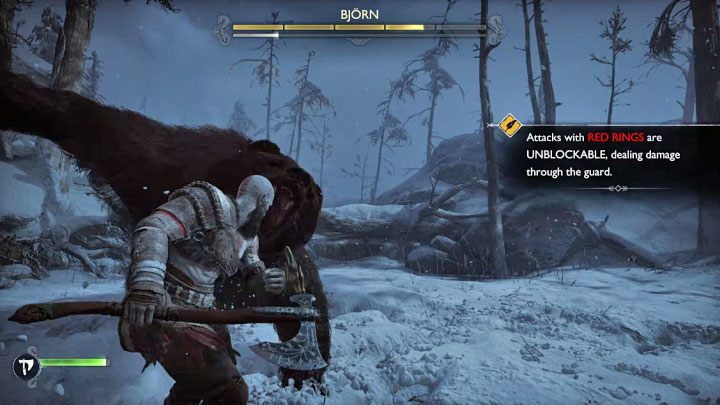 The bear can make several attacks in a series with its paws. These can be the regular or yellow attacks - you can play more defensively by dodging all attacks or try to block the regular ones that cannot break Kratos' defenses. 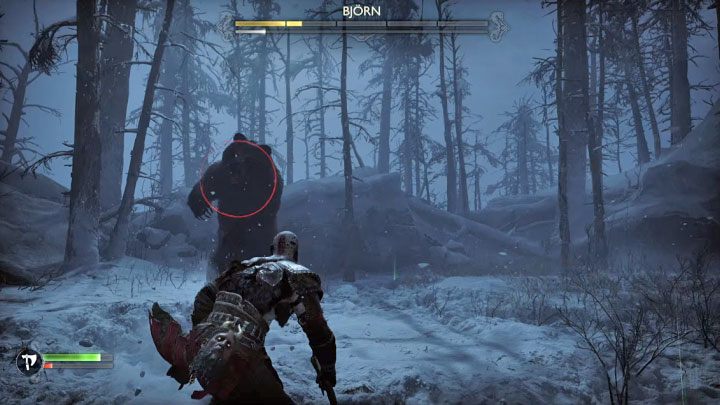 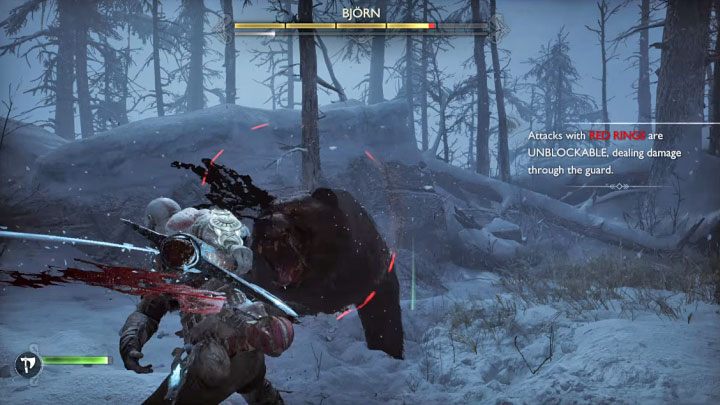 Red attacks are unblockable. The only effective solution is a quick dodge to avoid being hit.

The bear has 2 types of red attacks: 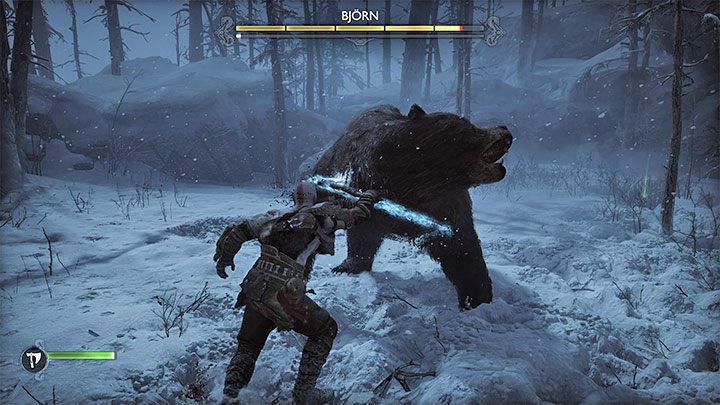 Attack the bear right after blocking or avoiding its attack. If you are away from the boss, then immediately run towards it. Remember that you have a sprint attack. 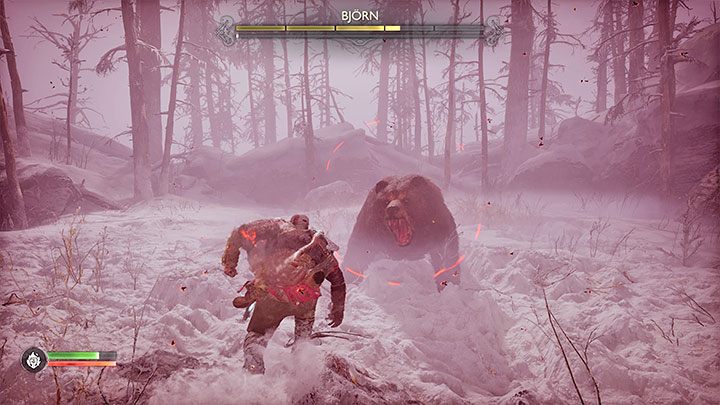 At a certain moment, you will be able to activate the Spartan Rage - press both analog sticks simultaneously.

Kratos in rage mode can inflict much more damage and recover small amounts of health points on occasion. Attacking in this mode can stop the boss from using yellow and red attacks. Try to inflict as much damage on the bear as possible before the Spartan Rage ends. 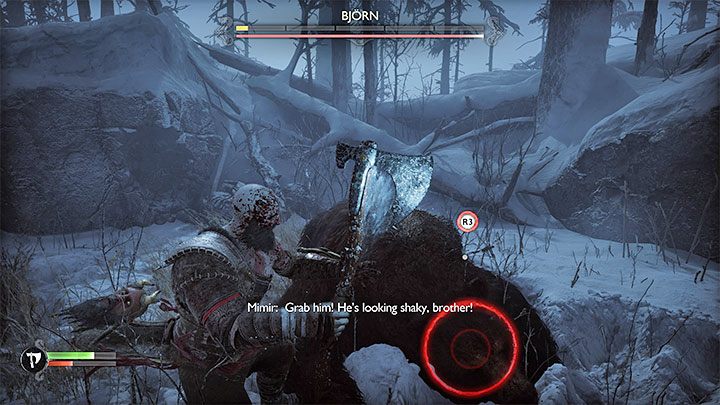 At the very end of the battle, the bear will get stunned. It is signaled by the R3 icon (left analog stick).

Note - This state doesn't last forever. If you aren't fast enough with pressing R3, the enemy may regain some strength back. 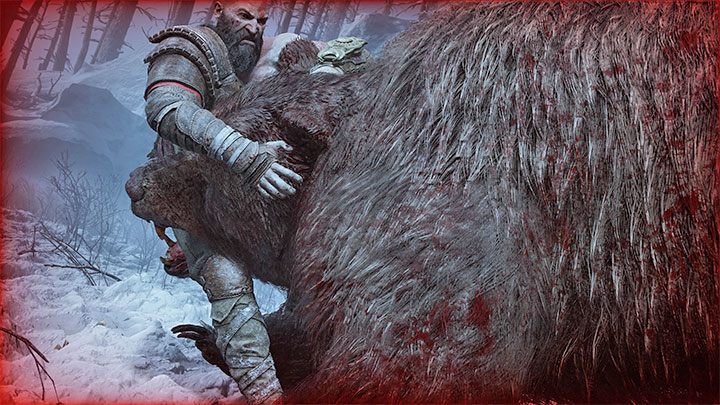 Don't worry about red on the screen - Kratos is safe. Watch the cut-scene.