Gloomwood can prove to be a quite difficult game for people without much experience with the immersive sim genre. This page of the guide explains the available difficulty levels. Moreover, we inform you about additional modifiers that you can apply to customize the challenge.

Our description of the difficulty levels is based on the Early Access version of Gloomwood . This means it is dedicated to version 0.1.214, which debuted in early access in September 6, 2022. The game is to receive modifiers and missing difficulty levels in further versions. 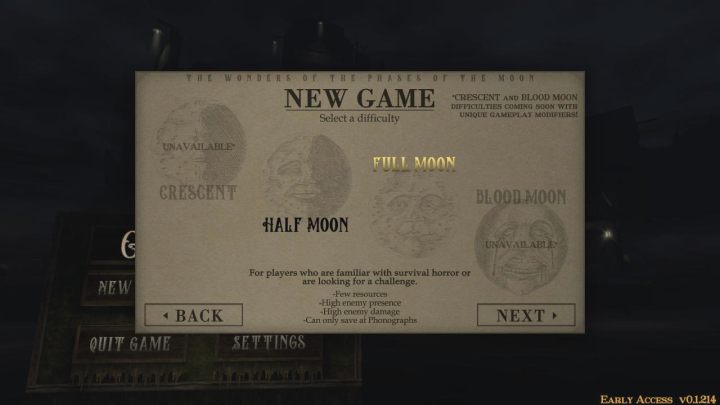 Gloomwood will ultimately offer 4 levels of difficulty - Crescent, Half Moon, Full Moon and Blood Moon. Unfortunately , only the 2 middle tiers are available in the Early Access version (September '22) . The other two are to be added in the future.

Half Moon is the normal difficulty level . It is a good choice for people that don't have much experience with this genre but also do not want an excessively easy game. At this level:

Full Moon is equivalent to a high level of difficulty . It is a good choice if you have experience with similar productions, and you want to make eliminating or avoiding enemies more demanding. At this level:

The early access version does not offer gameplay modifiers, although they are planned. There is a good chance that they will appear with one of the updates before the premiere of the final version of Gloomwood . We can speculate that they will allow better adjustment of the game to your preferences, for example in areas such as the perceptiveness of enemies or the amount of health or stamina of the main character.