A) Central section of the large bridge, connecting U.S. and Mexican borders

Just as in the previous mission of the campaign, you won't be allowed to choose a drop zone. You should also know that you'll have to take part in VERY CHALLENGING battles right away, so you should be extremely careful while giving orders and moving on the map. You will have to watch out for your squad members, because you'll need them to reach the Mexican border (later during the course of this mission).

I'm sure that you won't be surprised by the fact that this is going to be the most difficult mission of the entire singleplayer campaign. You will have to be very precise, careful and... lucky. You will also have to prepare for the mission in order to ensure your success. I would recommend exchanging a default weapon. Sniper rifle will do the trick, especially sine you'll have to take out a lot of enemy units from larger distances. Furthermore, some of these posts aren't too accessible, so you would have some problems trying to get closer. Sadly, you will have to preserve your ammunition, because you will need to kill a lot of enemy soldiers along the way. As a result, I would also recommend using a standard machine gun which should be your secondary weapon. You will have to clear out a few buildings and a bunker and that's when the machine gun may come in handy. Remember to save up at least three clips for the grand finale. If you want to start with a default weapon, you would have to rely on your team members a little bit more and you would have to perform risky maneuvers. As for the setting of your team, you must take a sniper with you, especially since you won't be able to take out all enemy units on your own. Choose this soldier even if you have a sniper rifle in your inventory. The rest of the team is going to be less important, especially since you are going to be given a command of a small unit of allied soldiers.

Red arrows represent suggested routes to all of your main goal areas. Check the main description for this mission if you want to find out more. This picture was added only for a better orientation. A icon is the only possible drop zone for this mission. As a result, you will begin the game there. The exclamation mark icons represent mission goal areas. You will have to go there in order to fulfill main mission objectives. 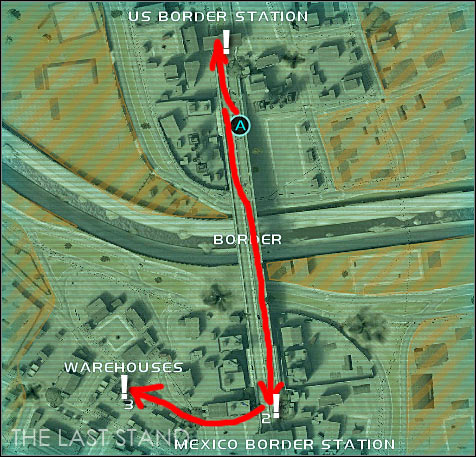