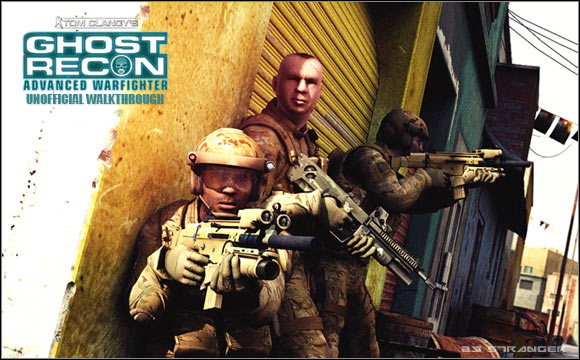 Welcome to the unofficial guide to third installment of the "Tom Clancy's Ghost Recon" series ("Advanced Warfighter"). The following guide consists mainly of a detailed walkthrough of the singleplayer campaign of the game. You should know that "Advanced Warfighter" isn't a linear game. There are a lot of different paths leading to your current destination. I am only suggesting where you should go at the moment. You may try a different approach if you want to. There's a lot of space for these kinds of actions. The same goes with the equipment. Machine guns and snipers seem a like a good idea, although they aren't necessary. You may consider taking something heavier... that is, if you feel comfortable with that kind of weaponry. The following walkthrough has been focused mostly on a default machine gun. This was my favorite weapon (especially with the combatsight attached to it). There are some additional hints in the last chapter of this guide. You should start off by reading them right now. You will find more about moving on the battlefield, issuing command to your squad members or using additional equipment. I have also suggested what to do in certain types of situations. There's also a few interesting things concerning different types of weaponry. I would also like to say that "Ghost Recon: Advanced Warfighter" is a very challenging product, especially when you've chosen one of the higher difficulty levels. Don't worry if you're dying all the time, mostly because you won't be able to save your progress all the time. There are only automatic savegames. As a result, you must be very careful. It is imperative that you plan each action. Remember that you won't be rushed by anything or anyone. Well... that's it. Have fun playing the game and using my guide! 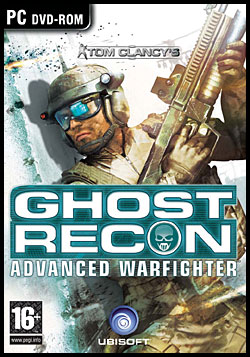 The year is 2013. The U.S. Army has been developing – and can now deploy – the Integrated Warfighter System (IWS), a complex combination of cutting-edge technologies that transforms an individual soldier into the ultimate fighting force. IWS combines advanced weapons systems, satellite communication devices and enhanced survivability into one fully integrated combat system that is finally ready for the true test of the battlefield. Combining the advantages of next-generation console technology with future military technologies, Tom Clancy's Ghost Recon Advanced Warfighter includes a wealth of groundbreaking features, including the Cross-Com, a communication device attached to the soldier's monocle and powered by satellite technology, which will deliver constant and complete battlefield awareness seamlessly within the action.
In Tom Clancy's Ghost Recon Advanced Warfighter, players will embody Captain Scott Mitchell as he commands the Ghosts and Special Forces allies equipped with the IWS in the quest to save the president of the United States, recover stolen nuclear codes and eliminate a vicious band of renegade soldiers hell-bent on unleashing catastrophe. The game unfolds entirely in Mexico City, where numerous, meticulously researched and detailed environments will deliver complete immersion into the future of urban warfare. Tom Clancy's Ghost Recon Advanced Warfighter will also include multiplayer and cooperative gameplay with exciting new elements, continuing the Ghost Recon tradition of setting the bar for multiplayer action.
The face of war has changed. Enemy lines blur and there is no longer a clear opponent. New enemies and new threats require a new type of warfare - a new type of soldier. Enter the Ghosts. In 2013, the U.S. Army will implement the Integrated Warfighter System evolving what we know as the modern soldier. IWS combines advanced weapon systems, satellite communication devices and enhanced survivability into one fully integrated combat system. The IWS program has been developed to meet these new threats head on. Now, it can be tested on the battlefield.
Following an insurgence in the heart of Mexico City, the U.S. Army's most elite Special Forces team is deployed to the center of the conflict to regain control of the city. Greatly outnumbered but fully equipped with the IWS, this elite team is the first and last line of defense on the battlefield. They are the 'quiet' professionals. They are the Ghosts.
- Next-generation gaming technology: Tom Clancy's Ghost Recon Advanced Warfighter is built from the ground up for next-generation consoles, maximizing increased power to deliver phenomenal graphics and a host of innovative features. Current-generation versions will be custom-tailored for each platform.
- Become the soldier of the future: Gain access to the future of military technology. Using a fully integrated combat system with cutting-edge weapons and communication systems, gamers will embody the soldier of the future. Based on actual military research, the Ghosts give gamers a realistic view of how war will be fought in the next decade.
- Revolutionary feature: Use the revolutionary Cross-Com, a communication device powered by satellite technology. Attached to the soldier's monocle, the Cross-Com provides full situational awareness and command of the battlefield. Command the Ghost squad and remote allied forces and drones, and direct artillery and air strikes. See what the squad sees and receive visual and auditory intelligence from allied forces and unmanned drones.
- Stunning urban environment: One capital, multiple locations. Tom Clancy's Ghost Recon Advanced Warfighter takes place entirely in Mexico City, one of the world's largest cities* A stunning, meticulously detailed universe will provide complete immersion in the urban war of the future.
- Top-notch multiplayer experience: Tom Clancy's Ghost Recon Advanced Warfighter returns to deliver industry-leading multiplayer and cooperative gameplay for one of the hottest online franchises.