This page of our Ghost of Tsushima guide contains tips for the boss encounter with Khan, leader of the Mongol army. Our guide explains when exactly the battle takes place. You will also learn what attacks Khan has at his disposal, how to complete both parts of the boss fight, and how to deal with Khan's bodyguards.

Additional note: Jin faced Khan for the first time during the prologue. However, this was a brief confrontation that the protagonist had to lose. As a result, we didn't include it in the chapter on boss fights. 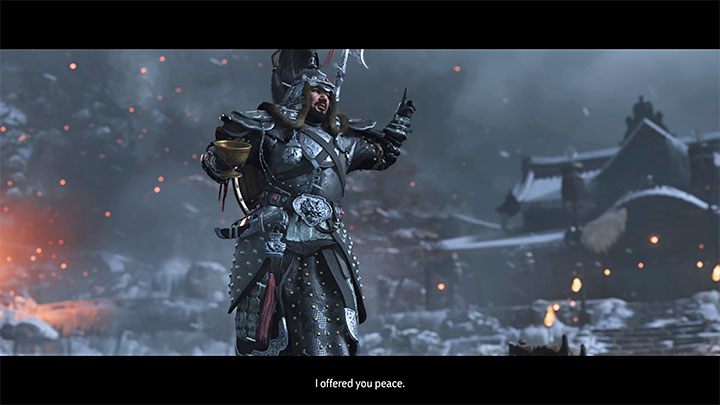 In total, there are two different battles with Khan, which occur a short distance apart. Both battles with the leader of the Mongol army take place in Eternal Blue Sky story quest. The fight is one of the final objectives of the campaign.

The first duel with Khan takes place during the crossing of Izumi Port. Jin must reach the courtyard of the mansion in the harbor. It's a one-on-one clash, so you can focus entirely on the boss.

You cannot use gadgets during the fight, but aside from your katana, you can use special melee attacks (the ones which you've managed to unlock during the game)

The key to winning is to stay away from Khan when he uses his red attacks.

Khan primarily likes to perform three large swings with his spear. However, don't get too close to him too soon, as after leading with three attacks, he will still make his fourth red attack. 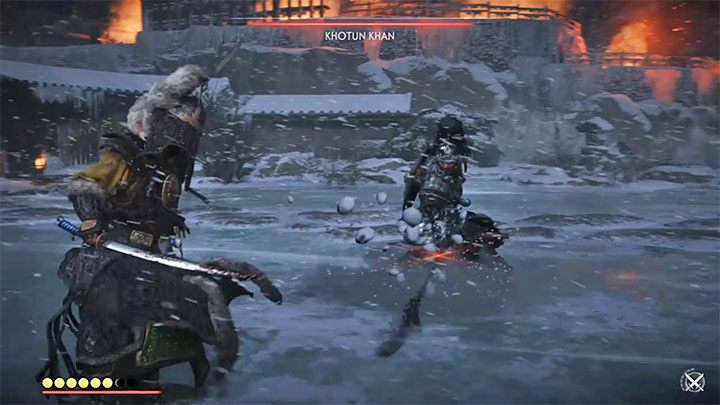 The boss's other red attack is the one that starts with a simple swing. You have to react in advance because the incoming red attack has a lot of range. Get away from Khan as soon as possible after you see him perform this combination. 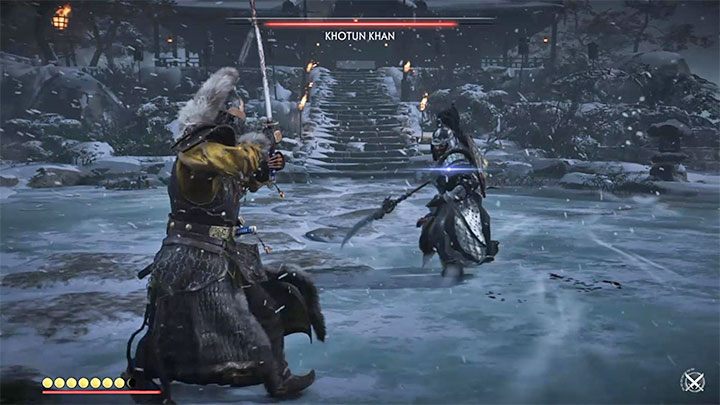 Once the animation of Jin's and Khan wrestling appears, the boss also begins to use blue attacks. As a reminder - parrying blue attacks is only possible if you've acquired Unyielding Sword Parry skill. Otherwise, treat them the same as red attacks and avoid them. 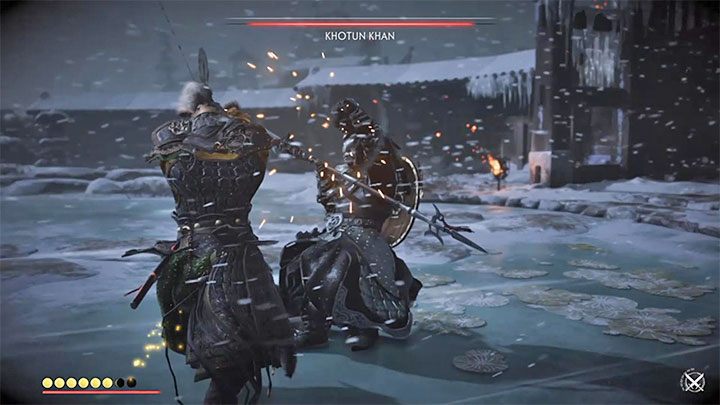 Khan is best attacked when he launches regular or blue attacks. The same as with earlier bosses, you can utilize perfect parries (activated pressing L1 in the right moment - you need to buy this skill) to weaken the boss. However, you can just as well go without them. Relying on normal parries and counter-attacks will simply lengthen the entire battle. 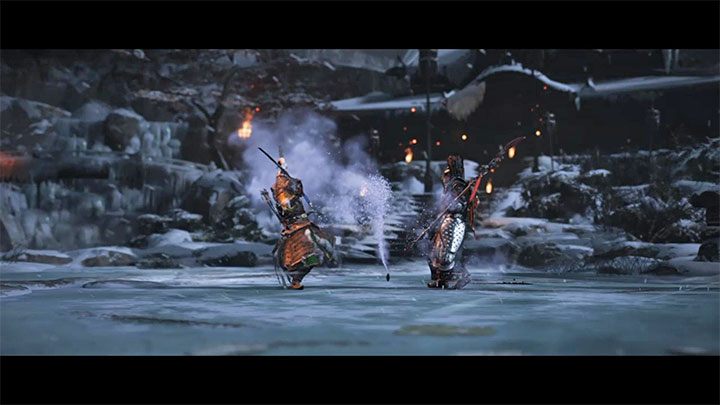 Unfortunately, you won't be able to kill Khan now. The first duel ends when the boss is on the verge of dying. Khan temporarily blinds the hero and escapes to his ship. 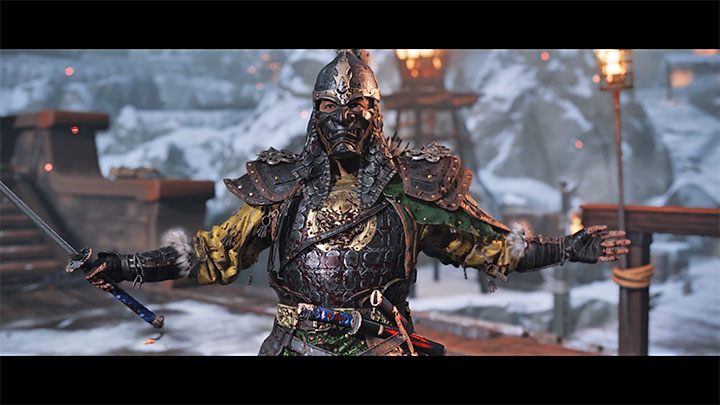 The second confrontation with Khan will begin shortly after the completion of the first fight described above. Jin has to deal with the fleeing Khan, who has fled to the Mongol ship. On the way to a moored ship, the hero can kill or evade normal opponents.

The second fight is significantly different from the first clash:

When the first phase of the battle begins, focus on attacking and killing the standard opponents on board the ship first. Unfortunately, the game won't make it easy, as you'll have to face enemies with shields, spears, or Brutes.

Remember to adjust Jin's stance following the targeted opponent. Make use of bombs or Kunai knives. However, don't use all gadgets at once, as you may run out in the final part of the fight. 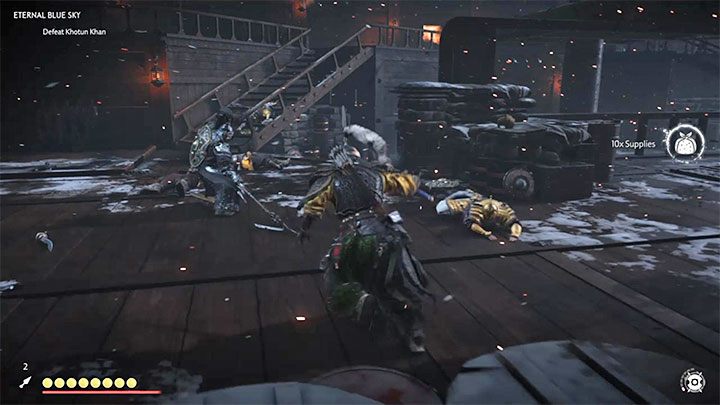 Khan initially stays on the upper deck, but after getting rid of most of his bodyguards, he joins the battle himself. Boss uses the same skills as during the first clash.

It's worth reminding that using your katana is not the only way to hurt your opponent. You can weaken Khan by using, for example, sticky bombs and kunai knives, as well blind him using smoke bombs. It should make it easier for you to stop his attacks and return with attacks of your own. 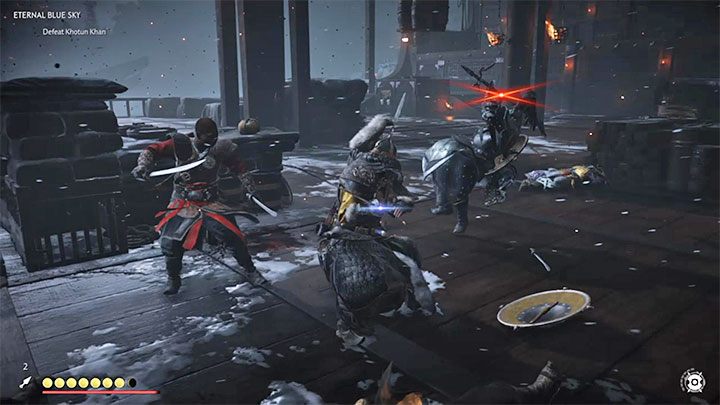 The smaller enemies will appear during the fight, attempting to engage you. It is best to take care of them as they appear, so they don't interrupt the fight by throwing Jin off balance and exposing him to Khan's attacks.

The first phase of the fight ends with a brief cut-scene depicting the Khan being thrown off balance. 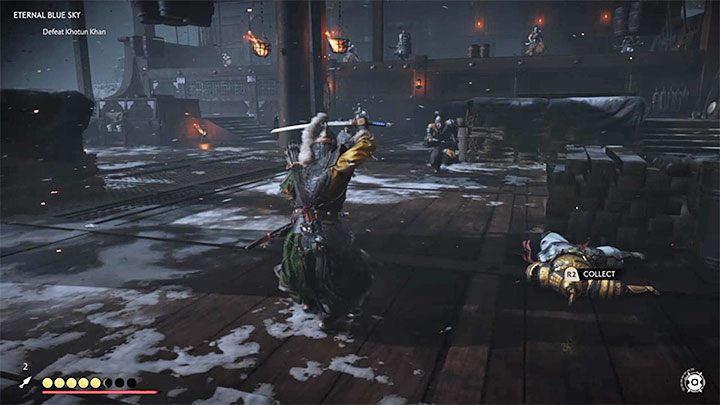 In the second phase of the battle, more Mongol troops approach. You must resume attacking standard enemies. A group of archers will appear on the upper deck. It's a good idea to attack them with a bow - aim straight at the archers or at the red barrels nearby. 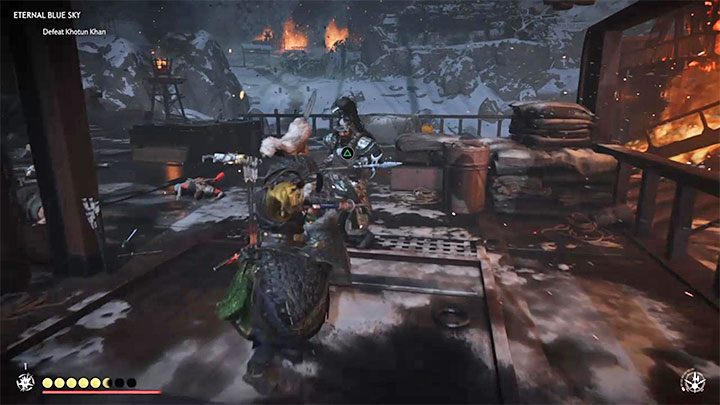 When fighting standard opponents, keep away from Khan so that the boss doesn't interrupt your actions and engage with attacks of his own.

The second phase of the clash ends once you've weakened the Khan enough. Look for the opportunity to press Triangle after the button icon appears on the screen (this is shown in the image above). Jin launches an attack which destroys boss's spear. 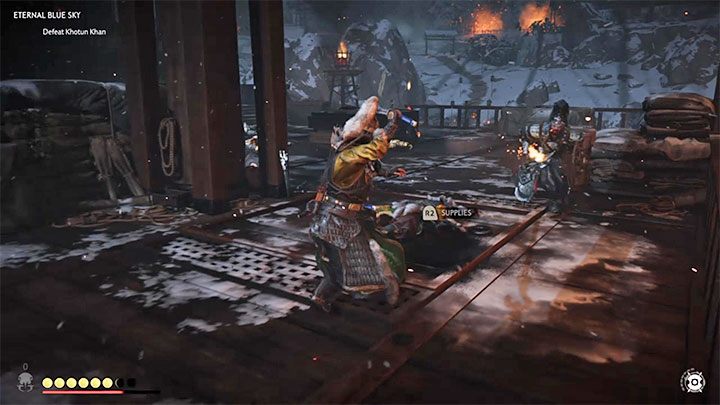 In the third phase of the fight, Khan will equip his sword. The boss can set his weapon on fire, which means having to perform additional dodges in response to boss's red attacks. If you catch on fire, roll quickly to stop losing health points. 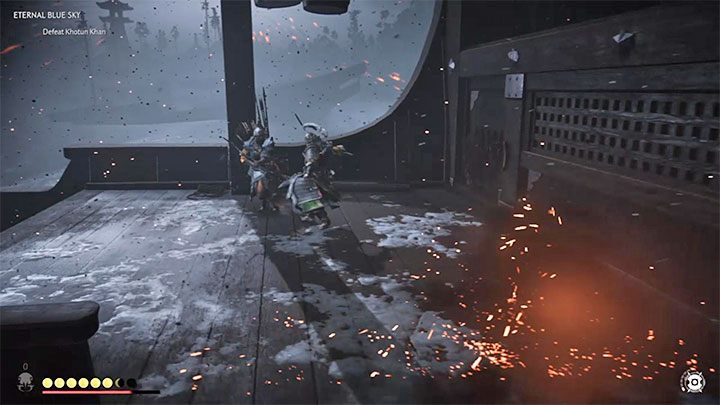 As in the previous two phases of the battle, new enemies will appear on the main deck of the ship. First, locate and kill new archers, for they will include opponents who are able to shoot flaming and poison arrows. In case of poisoning, quickly replenish your health. 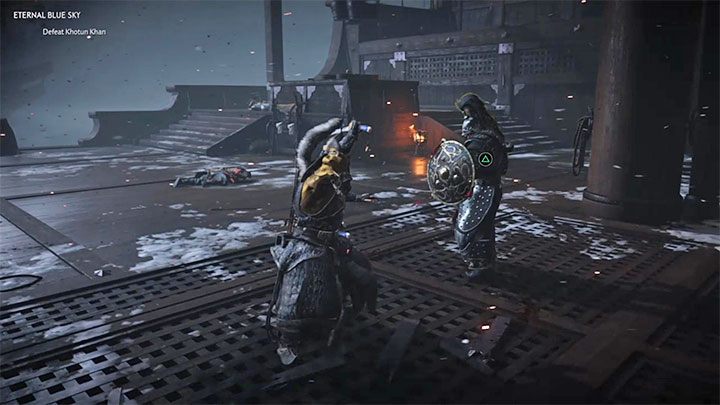 Fight until a new cut-scene activates that depict the boss being thrown off balance. Khan will get tired and cease his attacks. This is an opportunity to finally defeat the boss. Approach him and push Triangle a few times to deprive him of his sword and shield. 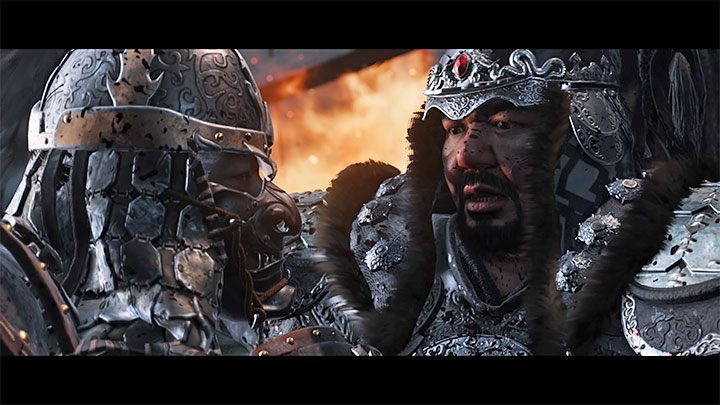 A final Katana attack will stab the boss in the chest. Jin then murders Chan by decapitating him.