This page of our Ghost of Tsushima guide contains a detailed walkthrough for Heart of the Jito story quest. During this mission, Jin must sneak into Shimura Castle. Our walkthrough tells will show you how to get to the castle grounds and how to get to Lord Shimura's quarters unnoticed. 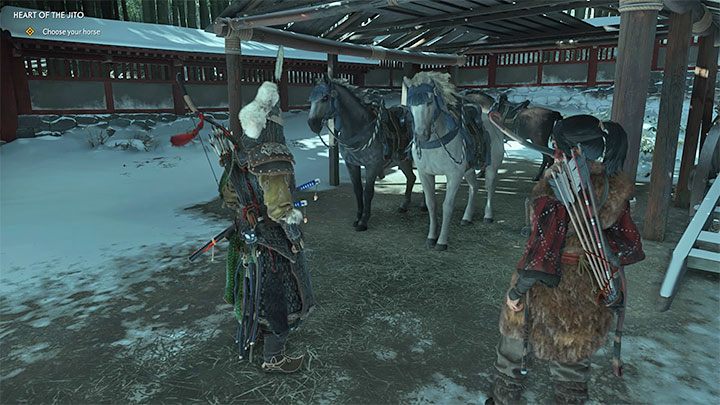 This task will appear in your journal after you have scouted the Izumi port, which is a part of the A Gathering Storm story quest. Meet Yuna again at the Jogaku Temple.

The horse you have been traveling on since you reached the Kamiagata region was only a temporary mount. You can now re-choose a "permanent" horse, that is, one that will stay with you until the very end of the adventure. Just like in the prologue, you have 3 horses with different colors to choose from. After choosing the horse, you can select 1 out of 3 names.

Get to Shimura Castle from the North 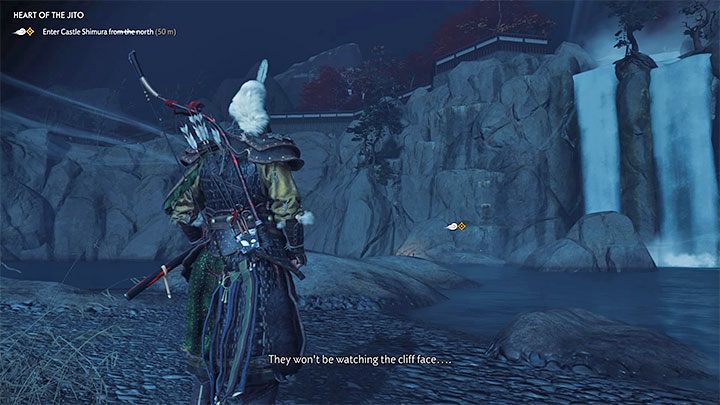 Jin's new assignment involves sneaking into Shimura Castle. As an exiled, he is now an "uninvited guest" there and would be attacked on sight.

Make the long journey south. You must reach the cliff shown in the image above. Watch a flashback. Once you return to the present, the hero can begin the climb. 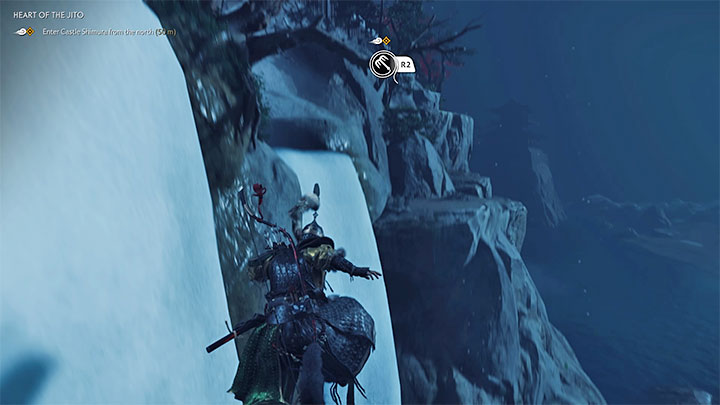 This part is not very complicated, although it involves using the grapple hook to reach the rock ledge on the other side of the waterfalls. Keep climbing until you reach the castle wall - squeeze through the hole to start infiltrating it. 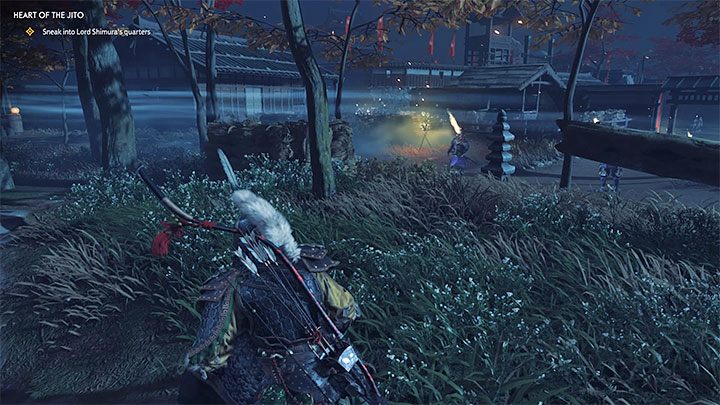 Sneaking and avoiding killing people is recommended, though not mandatory. Attacking people from the castle can negatively affect Jin's reputation. However, you shouldn't have any problems with remaining unnoticed. If necessary, you can, for example, use Wind Chimes but this is not required.

You have to start by sneaking through the garden. Follow the guards with the torches. Look for tall grass and other covers along the way. Don't get ahead of the guards and don't get too close to other characters you'll pass along the way. 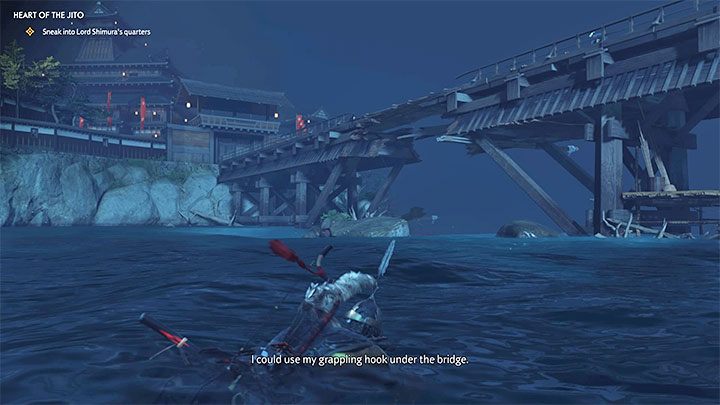 Stop following the guards when they approach the water tank. Jump into the water. Ignore the nearest islet with guards and bonfire. Go right instead. You have to reach the rocks below the damaged bridge. 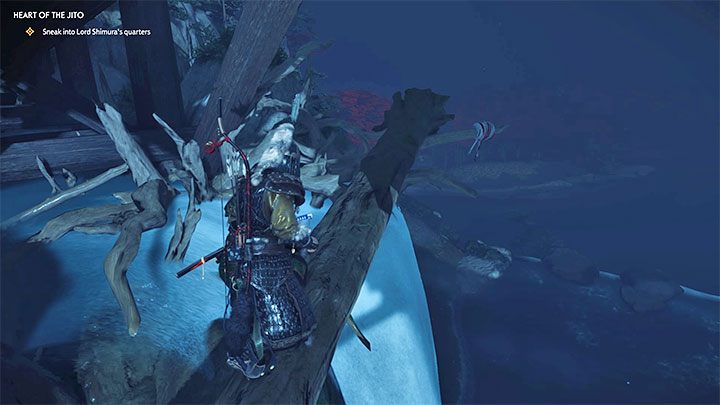 Climb the rocks and walk over the fallen tree. At the spot in the image, you can jump into the abyss and catch an interactive hook in air. Swing on a rope and jump to the hook located against the cliff wall. Climb to the upper shelf. 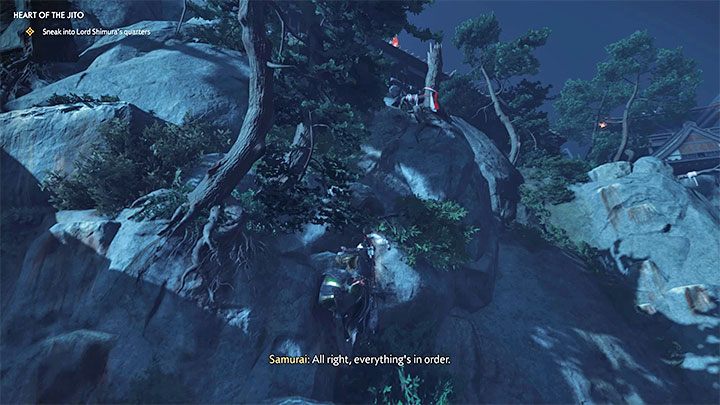 Continue the climb by moving sideways and jumping to the next interactive edges. Reach the place shown in the image above and make a jump towards a new hook.

Keep going - use the grapple hook and look for interactive edges. The linear climbing route will lead you to one of the castle's shutters. Get inside the building. 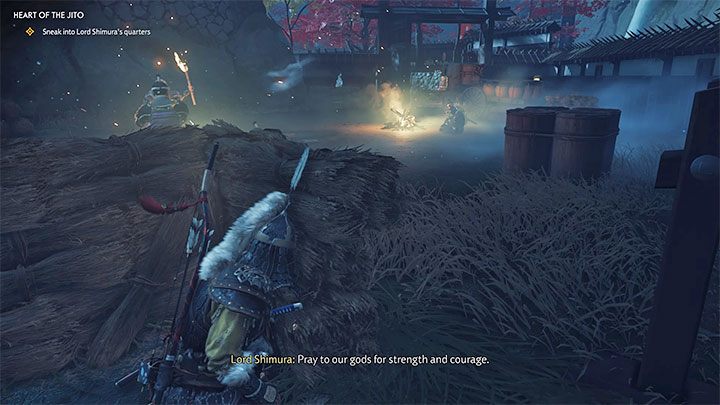 From now on, try to use focused hearing more often, because there is less distance between you and the guards. Get out of the building and start sneaking through the courtyard while staying close to the right wall. Don't get too close to encountered guards, especially those with torches. 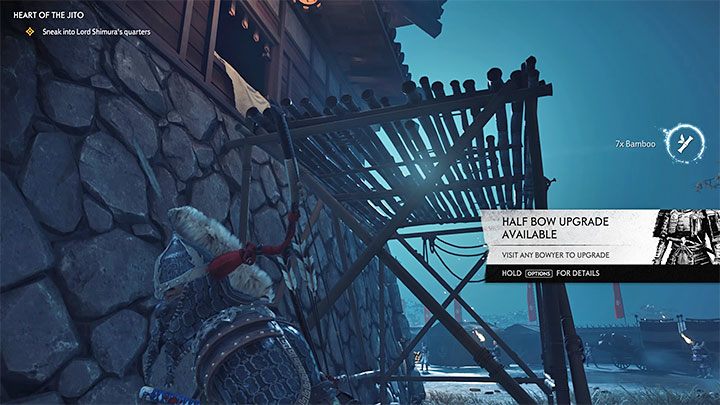 Go through the open gate and turn left immediately. You can climb onto the scaffolding shown in the image and reach the top shutter. 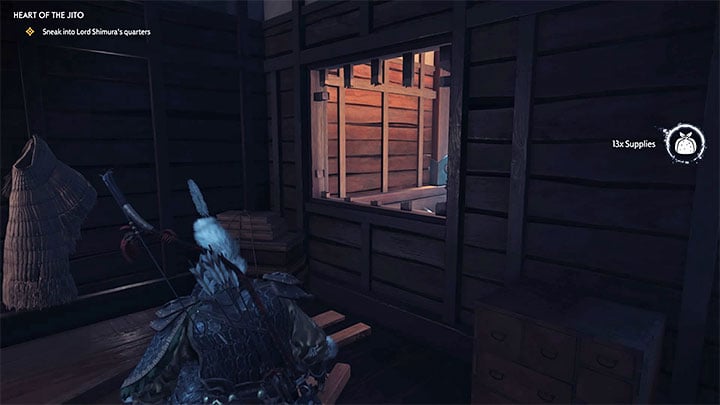 Start sneaking across the room, ignoring Lord Shimura and staying close to the right wall. Use a ladder encountered along the way. Eventually, you will have to reach another shutter - go through it to reach the lower part of the roof. 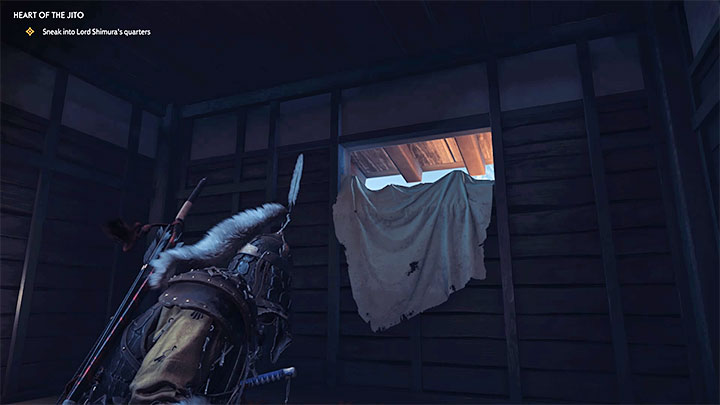 Reach the new shutter, which will allow you to enter the new part of the castle. Find another ladder and use it to get to the upper floor of the building. On this floor, focus on finding the smaller shutter shown in the picture. Squeeze through it to reach the upper roof. 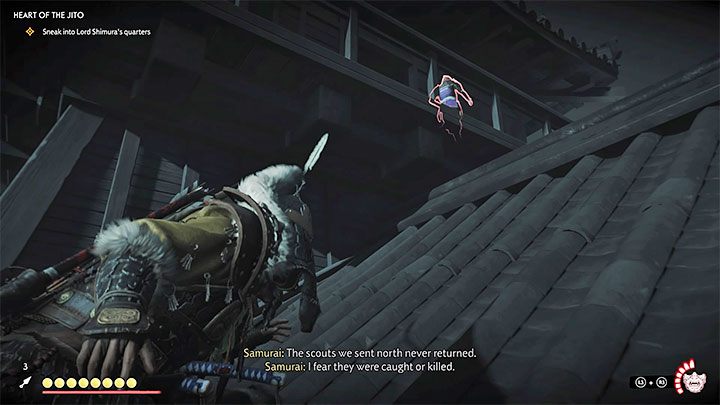 Look for two new ladders leading to the roof of the castle, but watch out for a single guard. You don't have to attack him. Watch him with focused hearing and jump over the railing. 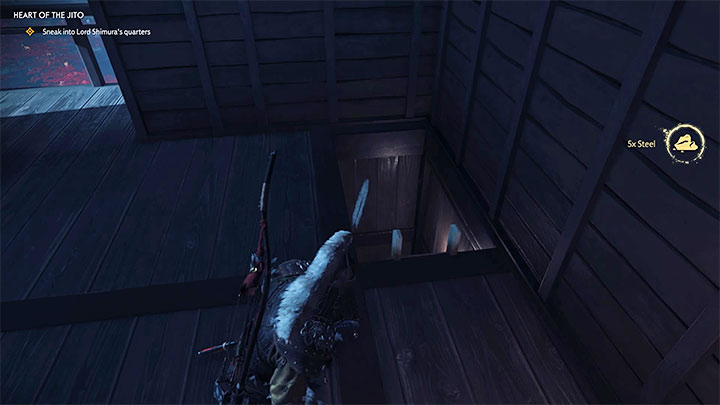 Enter the tower, find a hole with a ladder - descend to the lower floor. You'll be at the entrance to Shimura's quarters.

Leave the letter for Lord Shimura 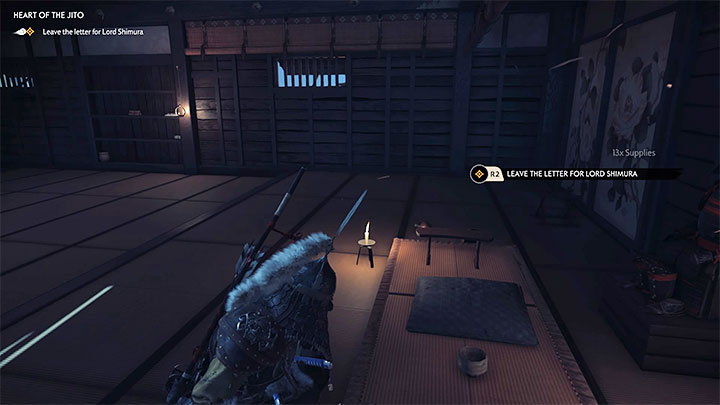 The final objective of the mission is very simple - there aren't any guards in Lord Shimura's room. Put the letter on the pillow. A cut-scene will end this task.