This page of our Ghost of Tsushima guide contains a detailed walkthrough for Wolves at the Gates story quest. Our walkthrough will help you in meeting Takeshi, sneaking into Kaminodake Fort, eliminating Mongols inside it, and finding Jin's former comrades.

Important note - Once you complete this quest, you will be able to use free travel for the whole world - all three regions of Tsushima. It's best to complete it as soon as it appears. 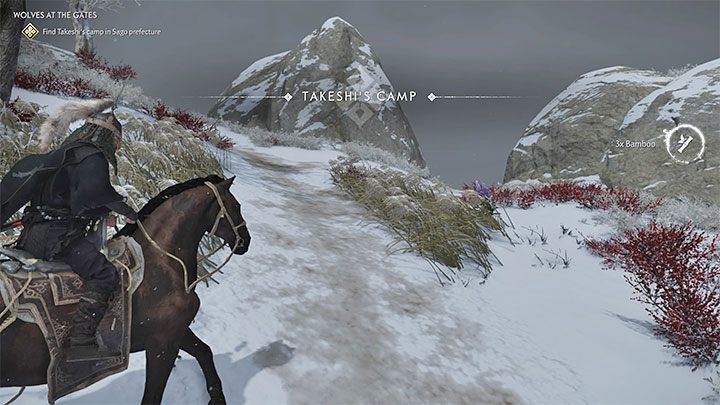 You can start this mission once you have completed Honor and Ash story quest - after Jin is freed from captivity and has reached the Kamiagata region. You must return to the Temple of Jogaku and meet Yuna, who is standing by the campfire.

The way to temple will take some time. Once you're nearby, find a path to the top of the mountain. Reach the campsite at the top and meet Takeshi, who is supposed to be standing by a small campfire. Walk towards the cliff and listen to another conversation with the man. 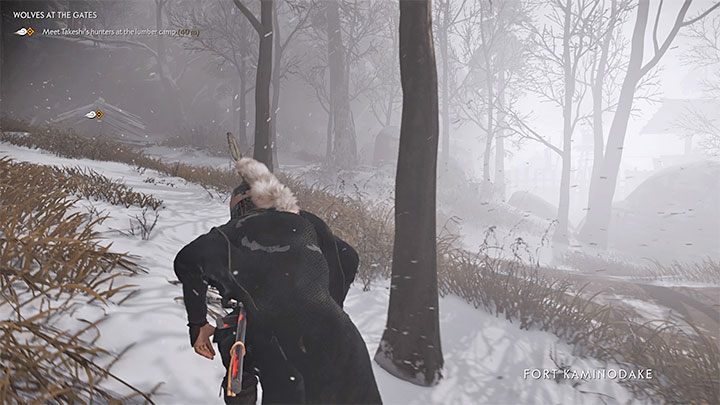 Head south once again, but this time you only need to travel half the distance. Do not approach the main entrance to the fort - it is occupied by the Mongols and the main path is guarded.

Head for a small hill to the left of the fort's entrance gate. There is a small lumber camp there. 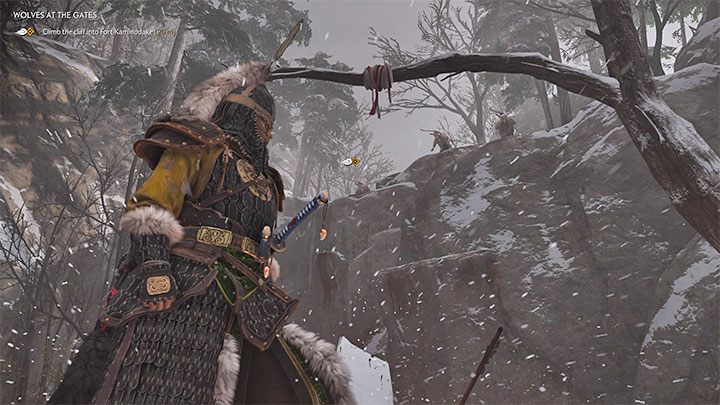 Climb the roof of the hut next to the campfire. You can jump from it to the hook shown in the picture and catch it with the grapple hook. Swing on a rope and jump to the interactive edge on the cliff wall. Use it to get to the top and join your allies. 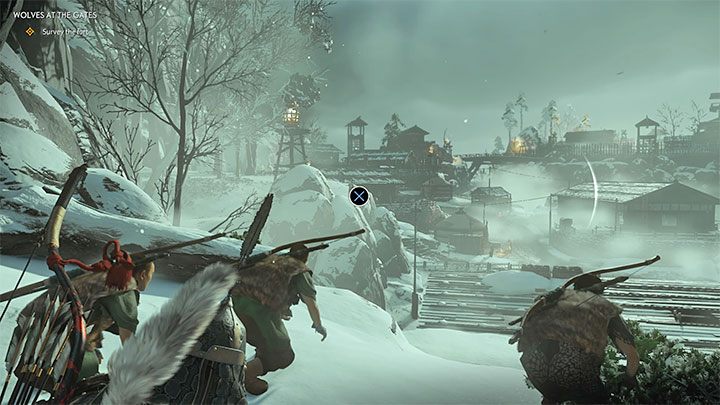 Reach a small hill from which you can see the fort - you'll need to scout it. Focus on the archers standing on the rocks on the left side and the large building in the middle of the fort - Takeshi suggests getting to its roof. 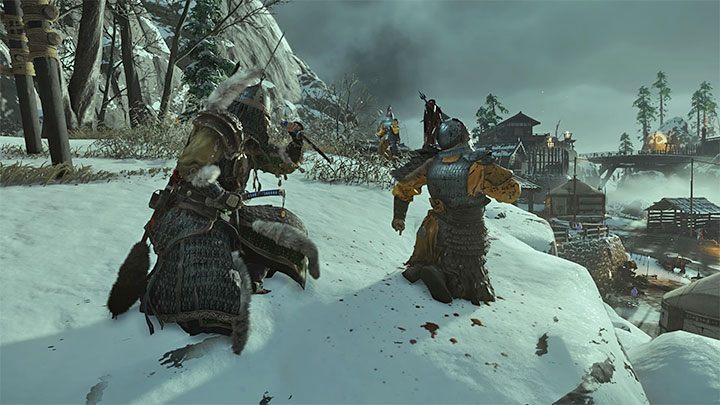 Get down from the hill and head towards the archers you watched while scouting. Attack one of them by surprise. The remaining targets should be neutralized by your allies. 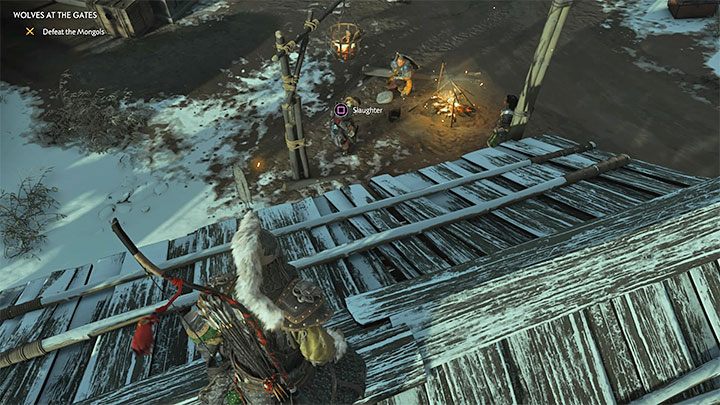 You can easily surprise another opponent patrolling the buildings below. Try to get to the roof of the nearest building, as this will allow you to cross over the dangerous area by using ropes.

A good way to start the battle is to sneak attack the leader shown in the picture. Performing a surprise attack on him will immediately recharge your Ghost Stance. Continue by activating the stance and use it to defeat 3 nearby enemies. 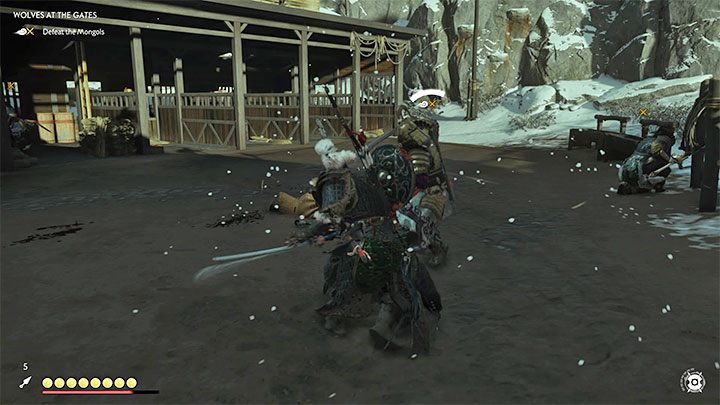 Once the battle starts, you can fight however you want - you can target opponents that are currently fighting your allies instead of facing them alone.

After winning the battle, join the other hunters that are set up along the main path leading to the next part of the fort.

Wait for Mongol patrol to arrive 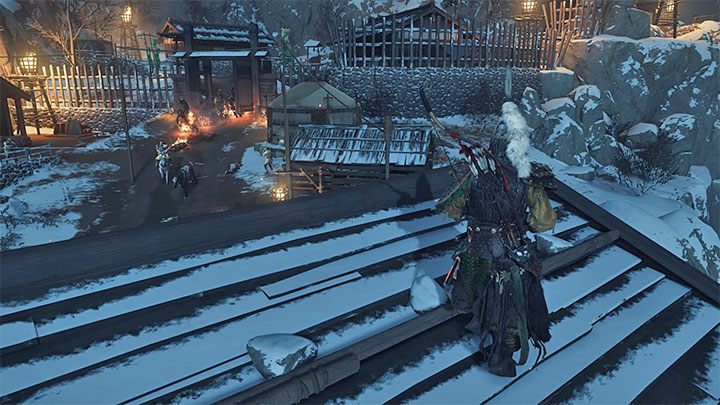 Plan a surprise attack on the Mongol patrol. We recommend that you quickly reach the ladder leading to the roof of the large building.

Explosive arrows or bombs will be perfect for attacking the patrol. Enemies will be killed or thrown off their horses. You can continue to attack them from the roof, or you can jump off it and use your katana.

Go through the fort with the hunters 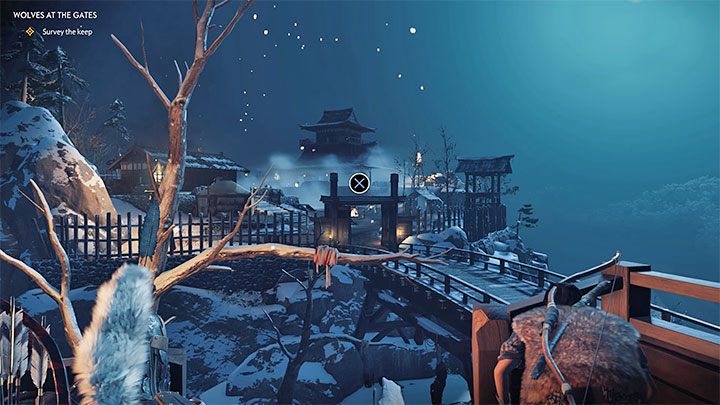 After dealing with the patrol, use the path they used and head to the unexplored parts of the fort. Approach the vantage point from which the Toyotama Bridge can be seen.

Climb the observation tower and scout the area. In the location shown in the screenshot above, Jin spots a hwacha launcher - it would be good to take control of the launcher and use it on your enemies. There is also a rocky path running under the bridge.

Defeat the Mongols located near the tower 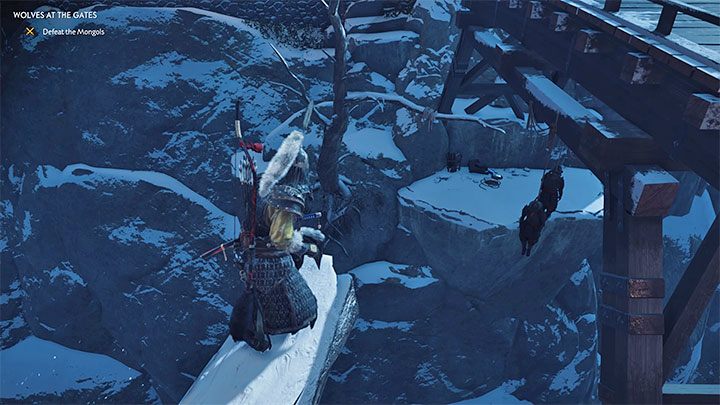 In theory, you have a choice - you can start a direct attack by running across the bridge watched by the Mongols or you can sneak under the bridge. The second option is better, as it allows you to reach the hwacha undetected and use it.

Approach the chasm and use the hook. Thanks to it, you can reach the path under the bridge. 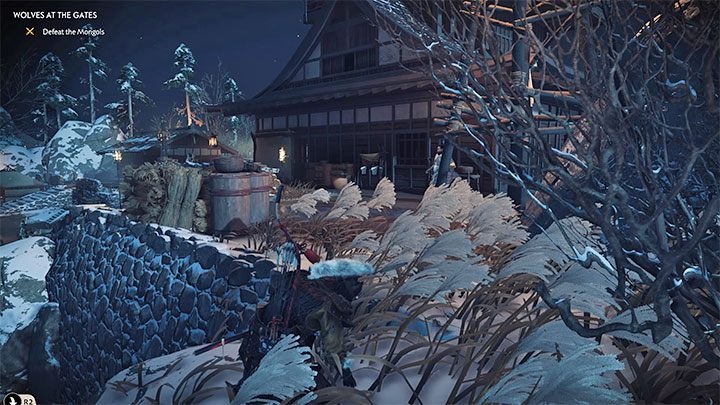 There are two more hooks at the cliff's wall - reach them one by one and don't forget to swing before each jump. Jump to the interactive edges and then grab the upper hook to climb up the wall.

Ultimately, you should reach the spot shown in the picture, which is at the back of the area guarded by the Mongols. 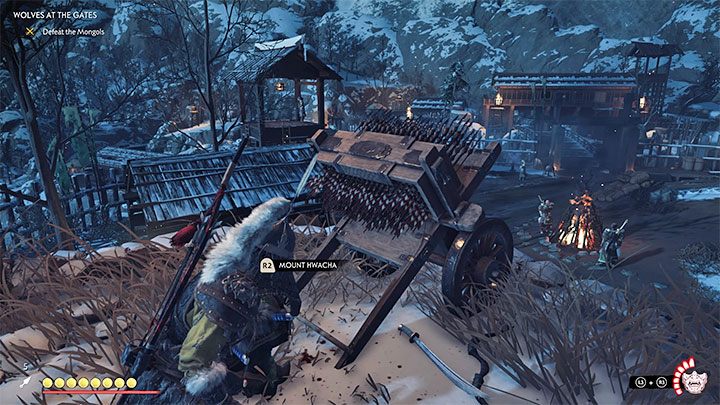 Continue sneaking. Along the way, you will encounter two Mongols, but they can be easily killed with stealth assassinations. Reach the hwacha launcher and use it. Start by targeting one of the larger groups of opponents and fire at them before they disperse to cause maximum damage. Use the opportunity and target the archer standing on the nearby tower.

Sooner or later, you'll have to abandon the launcher - some enemies are approaching your location. Don't forget to use gadgets, change stances and look for opportunities to activate the Ghost Stance. 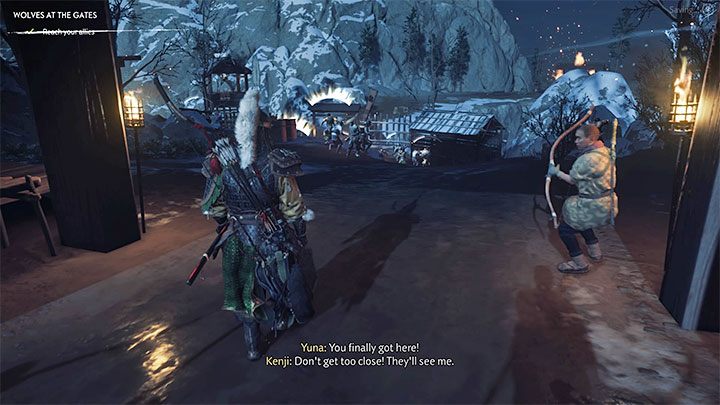 Move to the next part of the fort. Deal with encountered opponents - the battle will be easier as Jin's friends have joined the fight. As always, focus on those enemies who are busy fighting with your companions. Winning this battle will end the mission.

From now on, you can travel freely around the world again. This was because the capture of Kaminodake Fort unlocked the passageway between the Toyotama and Kamiagata regions.