This page of our Ghost of Tsushima game guide contains a detailed walkthrough of the Honor and Ash main quest. This is a long mission that ends the second act of the campaign. From our walkthrough you will find out how to escape from the castle while being unnoticed, where to find Yuna, how to retrieve Jin's equipment, and how to take over the Jogaku Temple. 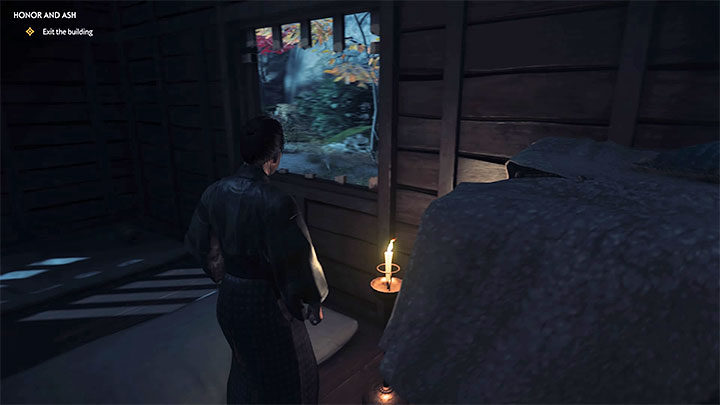 This mission begins automatically after completing From the Darkness story quest. For now, fast travel and free-roaming are not available, as Jin has been taken prisoner. You must successfully complete this quest to make fast travel and side quests available again.

Wait until Kenji shows up, as he will free Jin. In the initial part of the mission, you need to focus on sneaking and avoiding contact with encountered opponents, as all your equipment has been taken away from you. You'll find a shutter next to your cell that will allow you to leave the prison building. 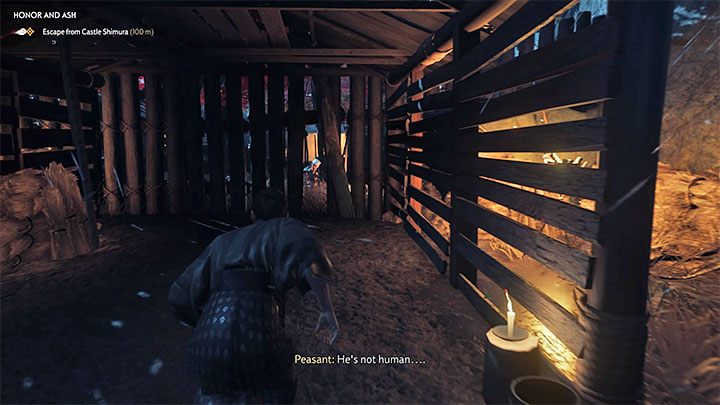 Remember that even though you've lost all your equipment, you can help yourself with your focused hearing ability to find enemies and keep track of those characters who remain in motion. Pass the first group of enemies on the right and reach the hole in the fence. Listen to a conversation with the villager about how to get out of the castle. 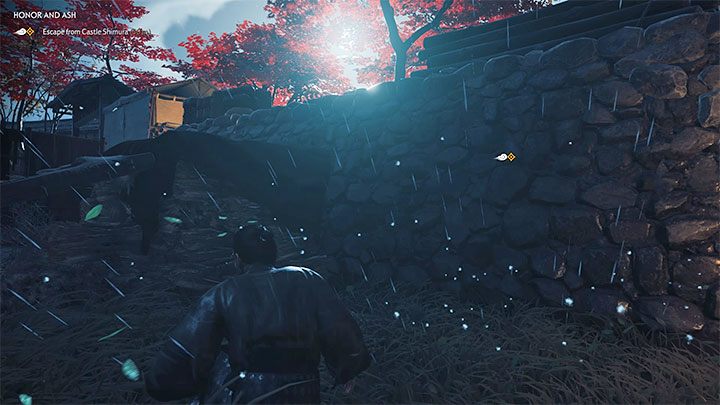 Head for the gap in the wall marked with a yellow icon. Go around the new enemies from the right side. On the way, Jin must, among other things, climb the wall shown in the picture. 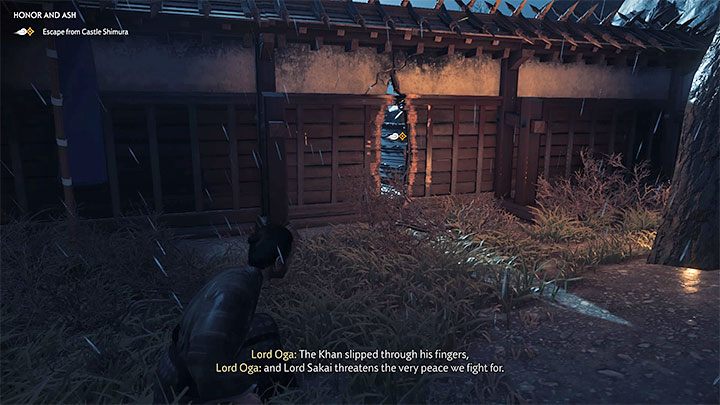 Bypass other enemies from the left side by sneaking behind their backs. This will allow you to reach the hole in the wall shown in the picture above.

After leaving the castle, an alarm will be raised - you couldn't prevent it. Of course, this doesn't mean that Jin was immediately detected. It's an information that enemies will be more alert and busy looking for your hero. 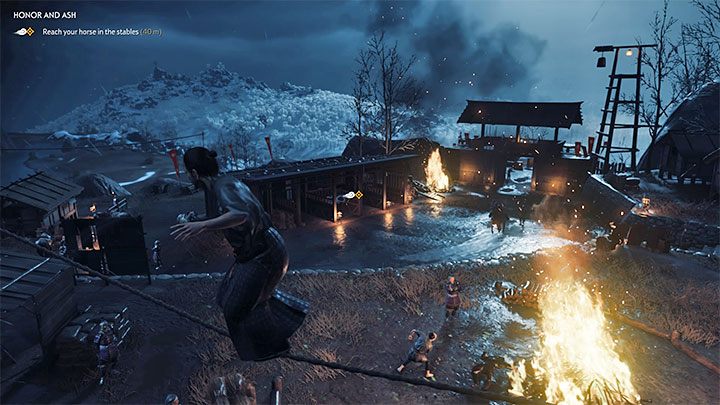 You still have to sneak around. Don't jump to the ground. Jump on the roof of the right building. Note that there are two ropes hanging here. You can walk over them and reach the stables without the risk of being noticed by someone. 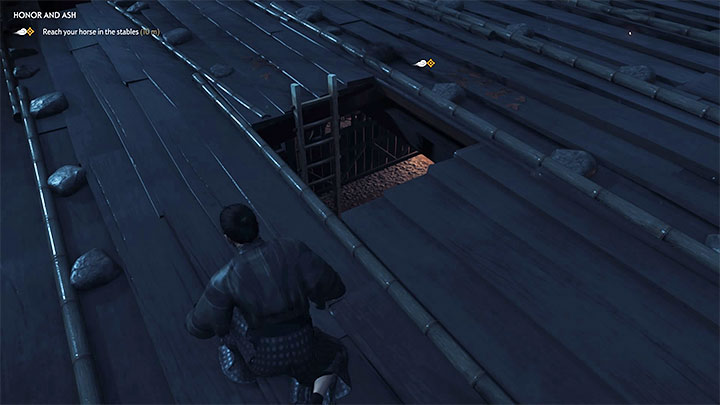 Get into the stables by jumping through a hole in the roof. Sneak up to the hero's horse and jump on the horseback to escape. The escape scene does not contain any interactive moments and during it you will advance to the third act of the campaign.

Reach the sacred tree without being seen 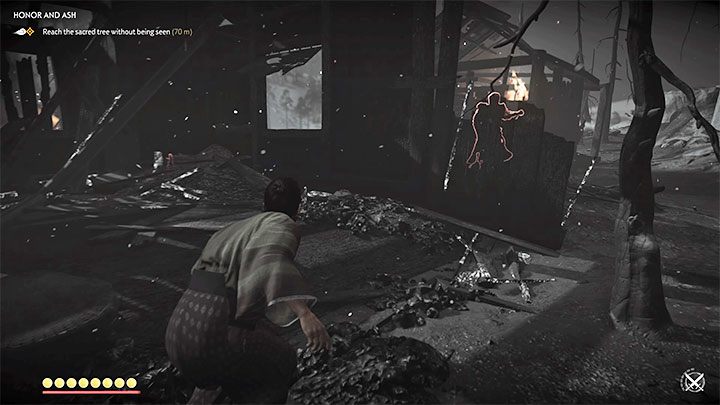 You must continue your journey on foot - stay on the main road, which is in the new region of Kamiagata. The path will take you to the Kin Sanctuary.

You have to start sneaking in this location because Jin still doesn't have any equipment. Head right and regularly activate focused hearing, as there are many Mongols in the area. Many of them don't move, but there are a few exceptions to this rule. One of the opponents patrolling the area has a torch with him (as shown in the screenshot). Sneak past him by passing through the ruins of one of the houses. 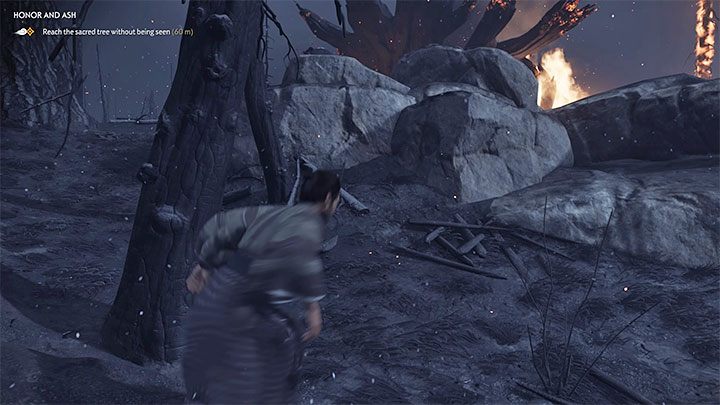 Continue to walk around the sacred tree from the right. You'll encounter another opponent with a torch and, like before, wait until he starts walking towards the other direction. You must reach the rocks shown in the picture above. Climb on them and get to the base of the tree. You'll find a corpse suitable for examination. 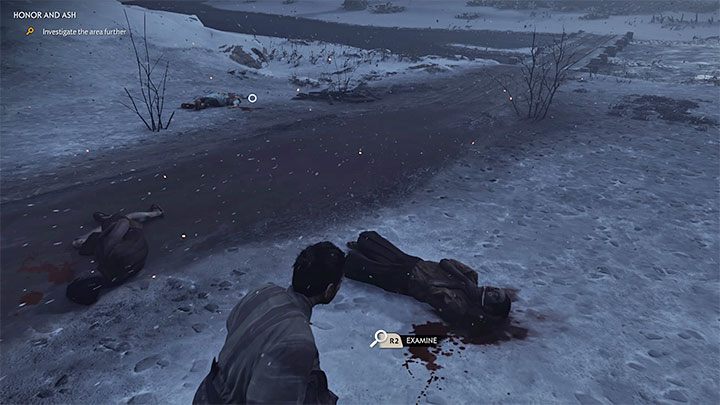 You'll find more dead bodies in the area. Head towards them and jump off the rocky ledges to reach a smaller path. Examine another corpse here. Jin will soon get hit by a poisoned arrow and unfortunately this couldn't be prevented in any way.

Try to walk forward until you pass out. Yuna rescues Jin. You will wake up in a new location. 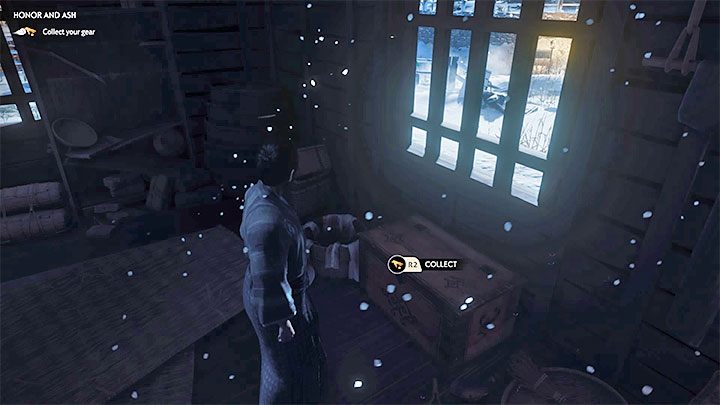 All of the main character's equipment is stored in the same room in which you have just woke up.

After recovering and equipping all items, leave the hut and join Yuna standing by the watchtower. 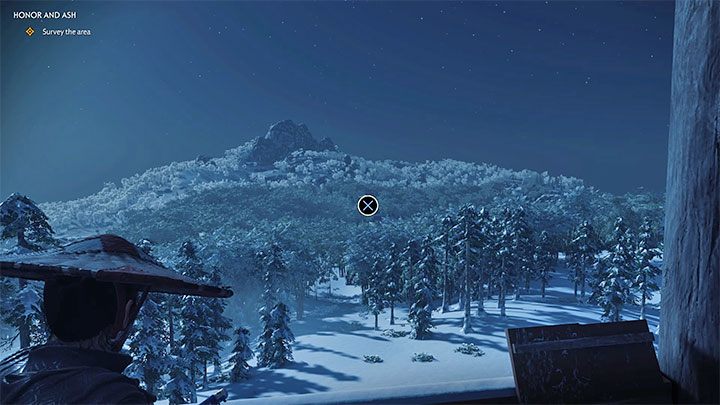 Go up the ladder to the top of the watchtower and start the reconnaissance. Take an interest in the pagoda visible in the distance. The heroes will choose it as their destination.

Get to the stables 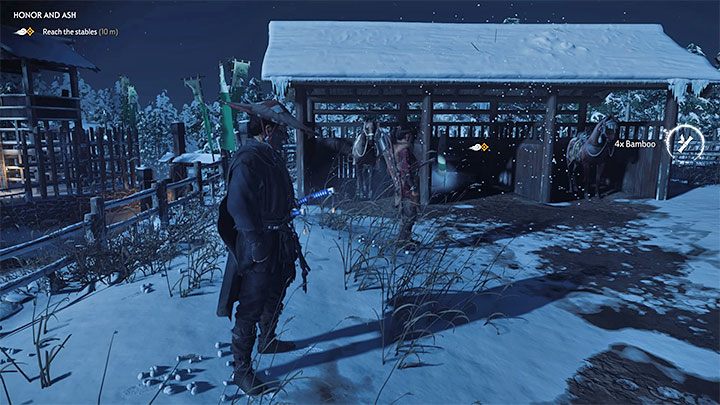 Get off the watchtower and head to the stables. You must choose a new mount to replace the horse lost in the final part of the second act. Your choice won't affect the story in any way. 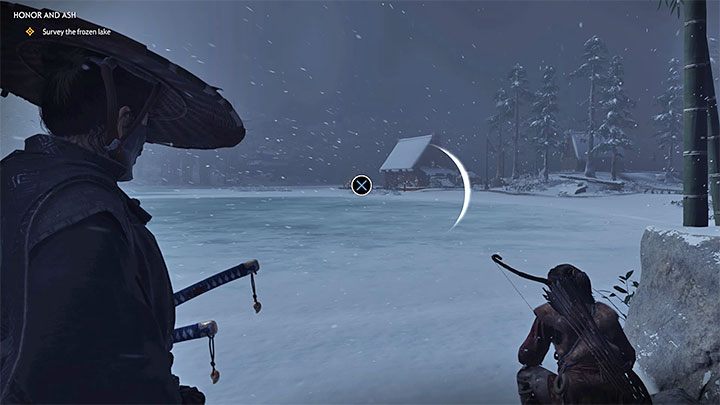 Embark on a journey together with Yuna. You must reach the frozen Jogaku Temple Lake.

Get to the next reconnaissance site. In this case, take a look at two areas on the shore of a frozen lake - a fishing camp in which civilians are being held and an alarm.

Free the prisoners at the ice fishing camp 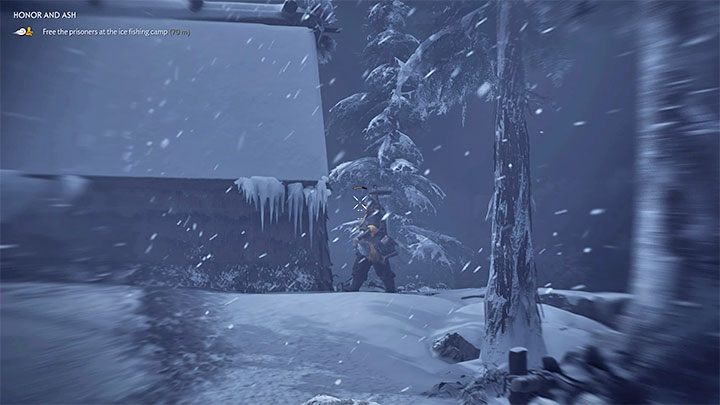 This mission should be approached in a similar way to other tasks and locations where it was necessary to rescue imprisoned hostages. Try to remain hidden for as long as possible - sneak up on enemies or eliminate individual enemies at a distance by relying on the bow.

If Jin gets detected, some enemies will try to kill the prisoners. Quickly attack enemies with skull icons above their heads, whether in melee combat or from a distance by using a bow. After securing the area, release the peasants kept in the ruined hut.

Review the plan of attack 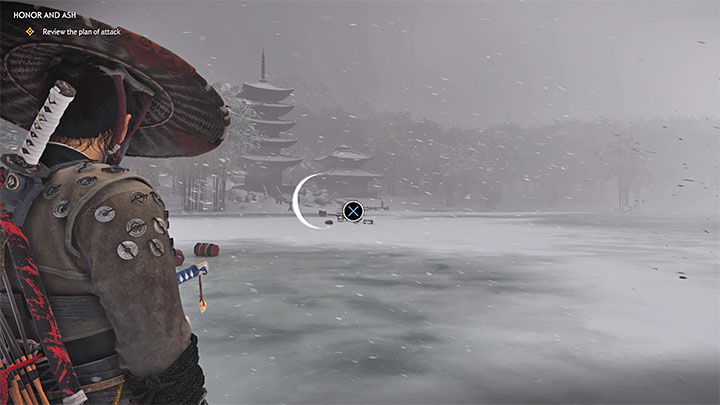 Reach the new vantage point marked by the game, from where you can spot a frozen lake and a temple occupied by the Mongols. Find interactive areas to explore - a cart with red barrels and archers standing on the shore.

After the survey, approach the fireworks in the area and launch them to get your opponents' attention. 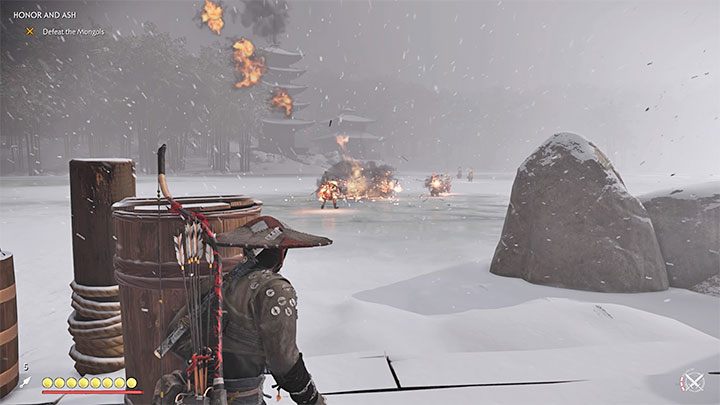 Stay on the shore where you did your reconnaissance. Wait until a large group of Mongols will approach the cart with red barrels on a frozen lake. Then use a bow to hit one of the barrels and lead to a large explosion. 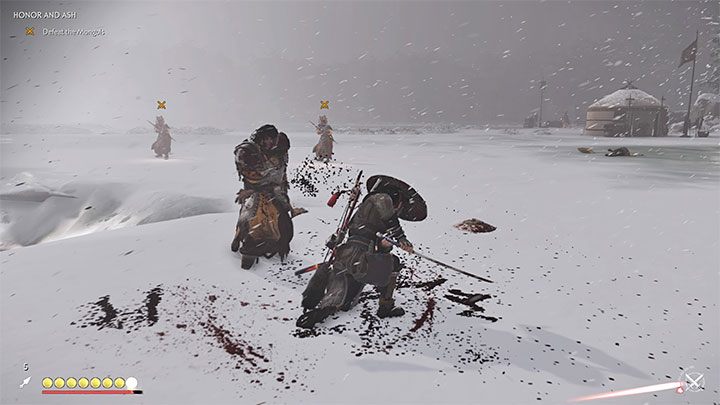 Once the battle starts, you can behave in two ways:

Survey the grounds of Jogaku Temple 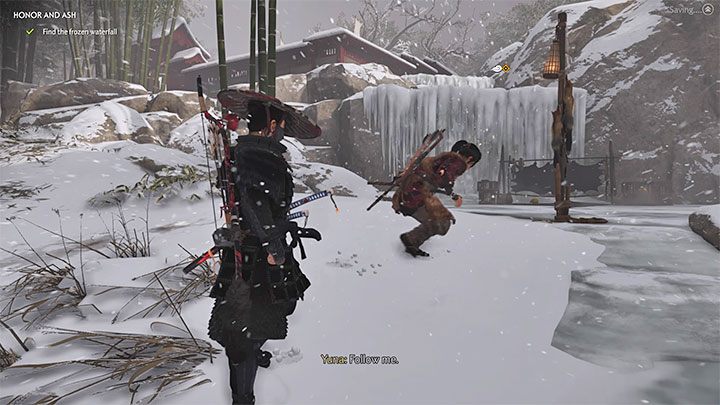 After winning the battle, go with Yuna to the Jogaku Temple in which the defeated opponents were residing. You can get to the temple by climbing the rocks near the frozen waterfall shown in the picture.

Defeat the leader and his guards 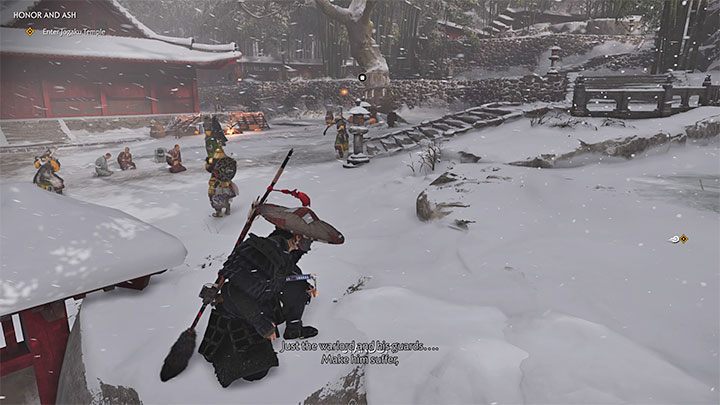 A large group of Mongols reside in the upper part of the temple. If you place yourself well, you can challenge them to a duel by activating the stand-off. If you rather not, attack them in any way you choose - as opponents are not initially aware of Jin's presence, you can use bombs. 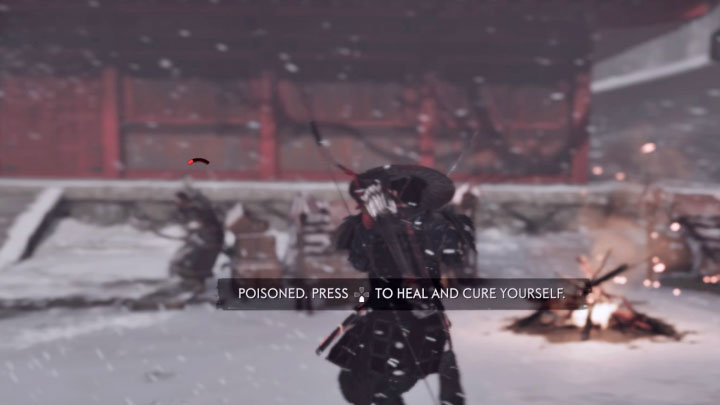 Once the fighting begins, focus on opponents firing poison darts. Jin can become poisoned, starting to lose health points quickly. You have to respond to that by healing him (directional button down).

Once the dart firing opponents are dealt with, you can move your attention to the leader and other brutes. If possible, use Ghost Stance and offensive gadgets. 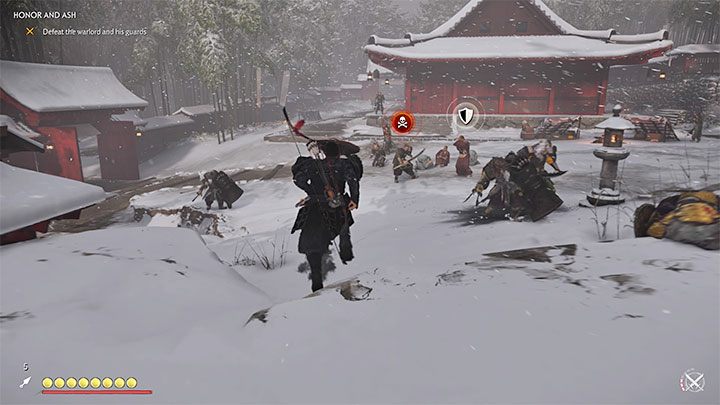 Unfortunately, this is another battle in which prisoners have to be protected. Be sure to focus on enemies marked with a skull icon. You have to stop them before they kill the prisoners. Winning the battle will allow you to take control of the temple and complete the quest.

Important note - Jin is still unable to return to the Izuhara and Toyotama regions as he is currently in exile. To regain access to these regions, complete the next story quest (Wolves at the Gates). Once you complete it, free roam and fast travel will be available again for the whole island, not just Kamiagata region.