This page of our Ghost of Tsushima guide contains a detailed walkthrough for The Fate of Tsushima story quest. This mission involves attacking Mongol-occupied Shimura castle. You will learn how to win battles taking place in the castle, how to avoid being hit by hwacha launchers and how to reach the bridge where the final part of the quest will take place.

Important note: once you begin this quest, fast travel won't be available for some time. You won't be able to explore the surrounding locations or complete any side quests. After you complete this main quest and the next three quests, the situation will stabilize. That is, you once again will be able to freely explore the game world, complete side missions and use the fast travel option. 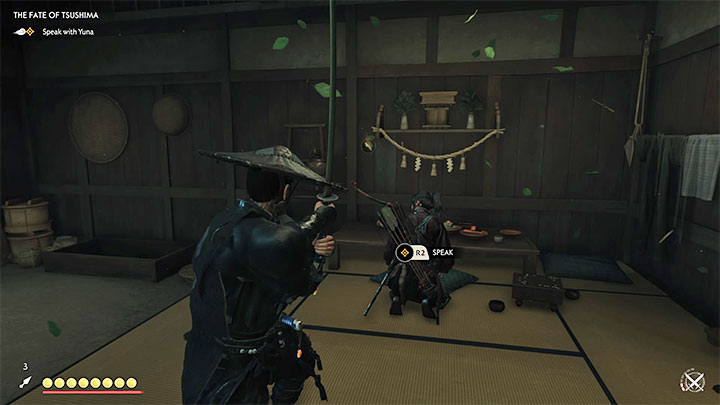 You can start this mission after you have completed A Reckoning in Blood main quest, which takes place after you get out of Fort Koyasan. You must return to Lord Shimura's Camp, where you started the previous mission.

Lord Oga will stop you at the entrance to the camp. After you will be allowed to enter, you can optionally talk to four allies in different parts of the camp - Lady Masako, Sensei Ishikawa, Norio and Kenji. Then, enter the building in which Yuna is residing. After having the conversation, return to Lord Ogi and make a decision to leave the camp.

Follow Lord Oga to the meeting place with the uncle 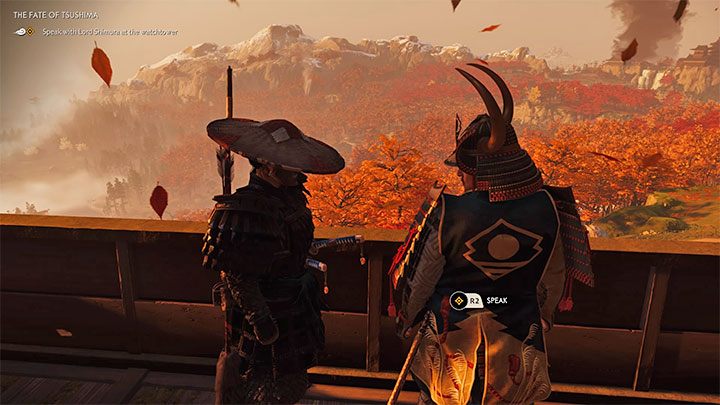 Mount your horse and get to the meeting spot. Once you have reached your destination, dismount and head to the watchtower. Lord Shimura is waiting for you at the top of the watchtower. After the conversation, the assault on Shimura Castle, occupied by the Mongols, will begin. 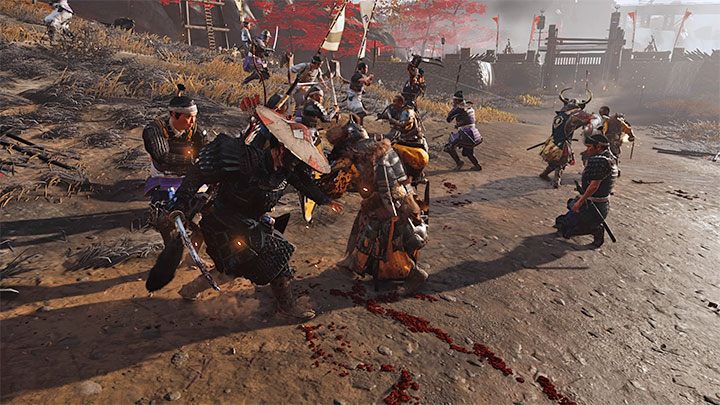 As you head towards Shimura Castle, you will have to take part in many battles. Their great convenience is the fact that there are many allies on the battlefield. You don't have to attack all Mongols alone and you can also look for opportunities to easily get rid of those enemies that are currently engaged in battle with your allies.

In particular, look out for larger opponents (Brutes) - there are good chances of killing them by stabbing a blade in their back. Don't forget to activate the ghost stance that will allow you to kill 2-3 enemies without any problems. 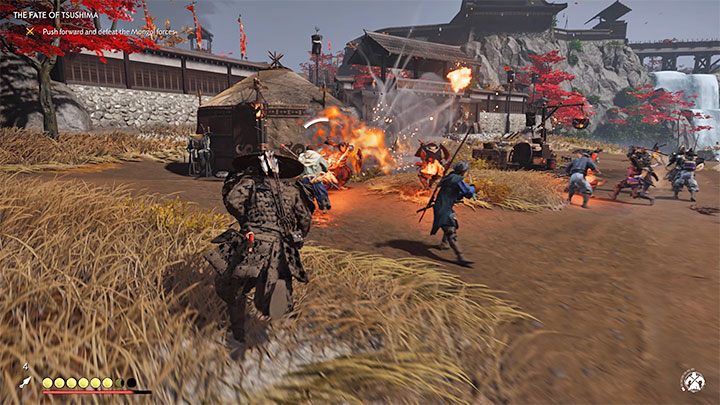 Reach the first locked gate. A short cutscene will be displayed demonstrating the use of a battering ram and destruction of the gate. As you enter the new location, engage in further battles and focus on the efficient elimination of hostile archers.

The second gate will be demolished soon. Continue to look for archers and easy targets, that is, opponents which are currently fighting with your allies. 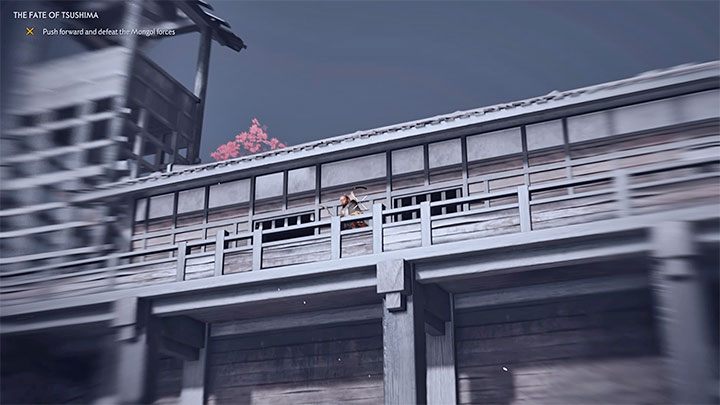 The archers on the walls, as shown in the picture, may cause some trouble. You have two ways to deal with them - you can try using a bow (it's best to shoot from a long distance and lean from behind a cover) or use the left ladder to reach them and eliminate them in melee combat.

Anyway, you have to climb the aforementioned walls in order to carry out a reconnaissance and reach one of the shutters. 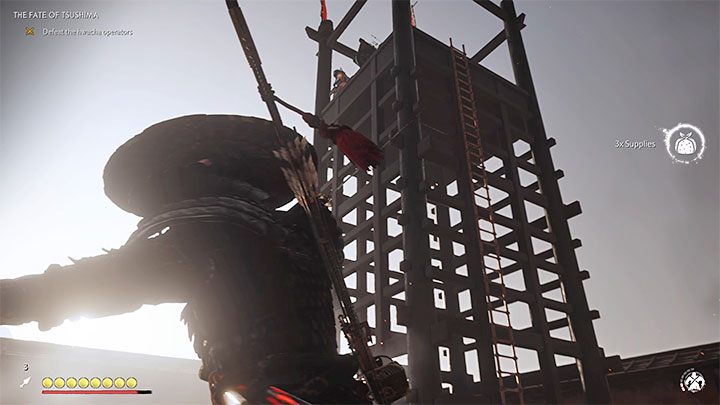 By watching the cutscene you will find out that the Mongols are using hwacha launchers and this is a threat that you have already confronted in one of your previous missions. The hwacha launcher will track Jin as the main target. Hwacha operators will try to bombard the hero with arrows.

The best tactic is to ignore the battles against enemies and continue to sprint towards the tower where the hwacha launcher is located. If necessary, rely on dodging and don't worry about surrounding enemies, because many of them will be attacked by your allies. Climb up the ladder to the tower and defeat the two hwacha operators. 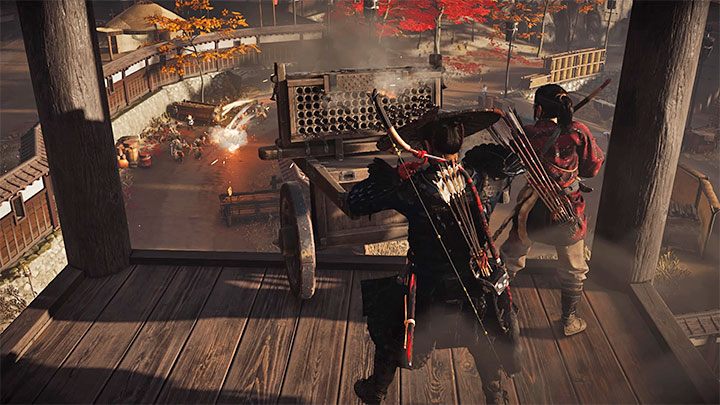 After you eliminate the operators, interact with the hwacha tower to use it and bombard your opponents. Aim at the large groups of Mongols that will appear on the path of your allies. Also, destroy the explosive red barrels. Fortunately, you will not be punished in any way even if you accidentally shoot one of your comrades. 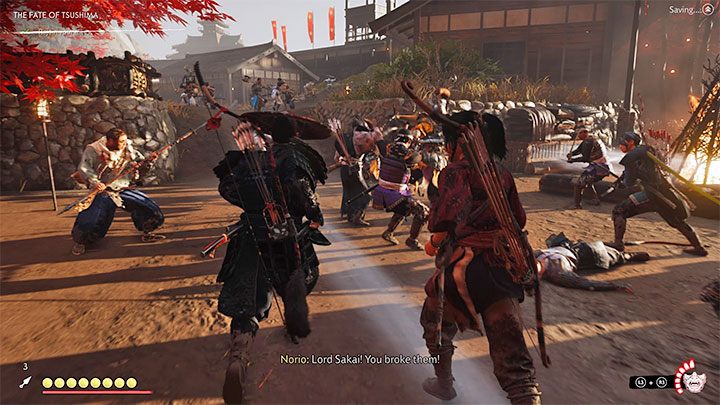 Use the hwacha launcher until all visible Mongols have been defeated. Get off the tower and join Lord Shimura and his men.

In the new part of the castle you have to resume intensive battles against the Mongols. This time, your task is to break through enemy forces and reach the bridge. As in case of the previous battles, try to attack enemies which are currently busy fighting your comrades. If necessary, help yourself with bombs, kunai or even change the stance.

Climb the guard house near the bridge. 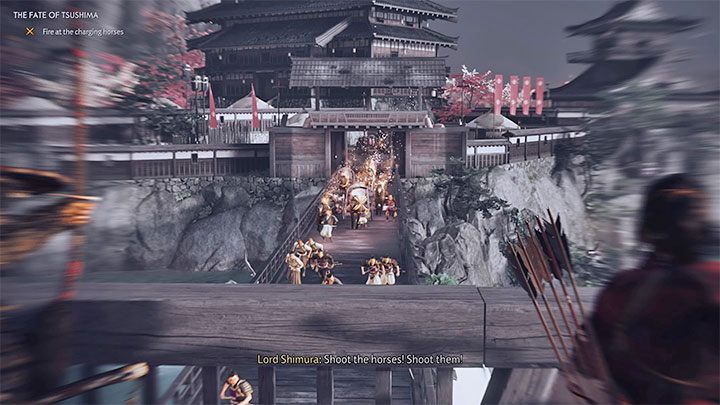 The heroes must reach the gate separating this part of the castle from the bridge. The gate is closed, but your objective is associated with something else - climb the ladder to reach the watchtower.

After watching the first cut-scene, shoot a few arrows towards the charging burning horse. Unfortunately, you can't stop it completely. Another cutscene will be displayed. This is the end of this mission.