This page of our Ghost of Tsushima guide contains a detailed walkthrough for The Walls of Yarikawa story quest. The following solution explains how to avoid the Mongol warriors occupying Yarikawa Stronghold and where to find a secret passageway to sneak safely into the fortress. 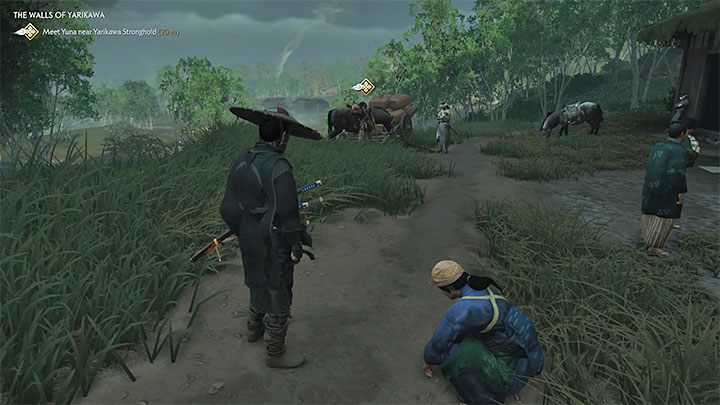 To begin this quest, you must meet Yuna near Yarikawa Stronghold. It is an allied location and is currently under siege by the Mongols. After listening to the conversation with Yuna and Taka, travel to the stronghold on horseback. Along the way, you'll encounter a large Mongol patrol, but you don't have to fight it, as the heroes will automatically wait for the Mongols to move away.

Figure out how to get to the fortress 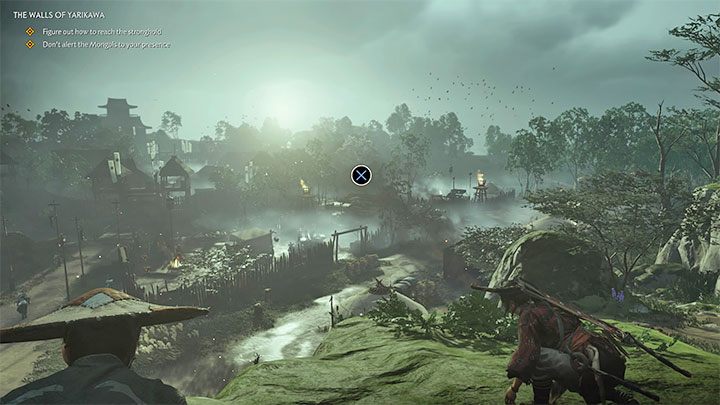 Once you reach the hill adjacent to the fortress, you'll need to scout the area, which takes place similarly as in previous quests - you must find interactive areas and confirm them by pressing X. The most important place to explore is shown in the accompanying image - a secret passageway that the heroes decide to use to sneak into the besieged location.

Bring Yuna and Taka to the river 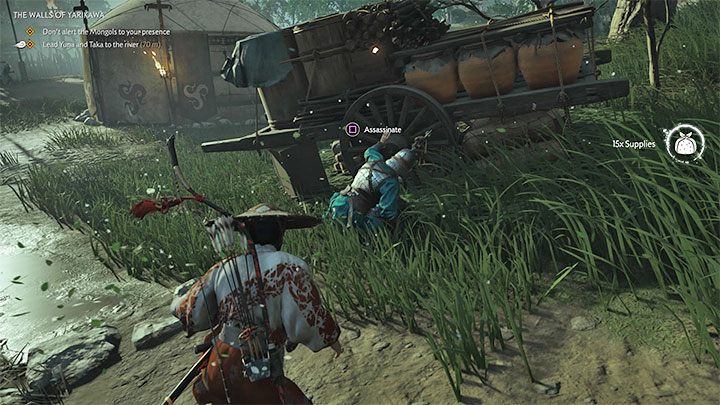 In this part of the mission, you cannot be detected by the Mongols, as being detected will mean failure.

Choose a path that allows you to descend from a small hill and continue to the tents that the Mongol army has set up. You can easily kill the first sentry working at the wagon. However, try to avoid attacking other opponents, as their corpses will remain in plain sight and may be spotted after some time. 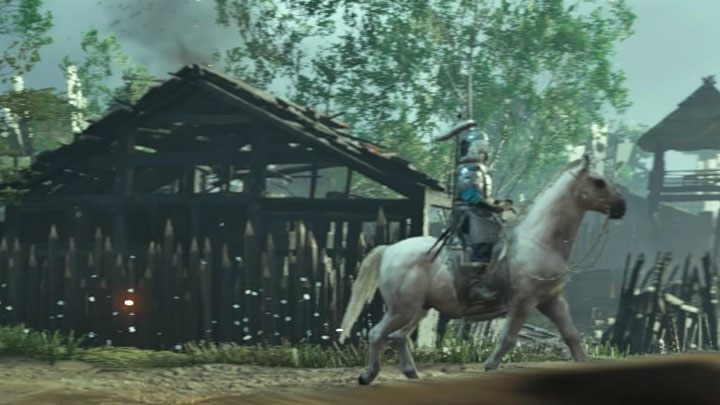 As you sneak through the Mongol camp, you must be most wary of a single soldier patrolling the area on horseback. His presence is also a reason to refrain from attacking "ordinary" opponents so that their bodies are not detected. 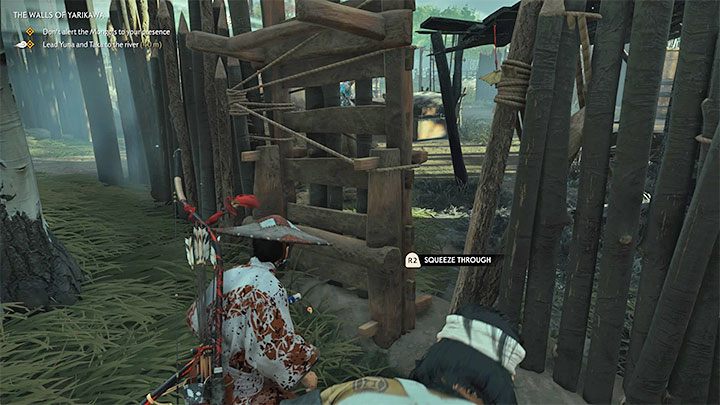 Wait until the opponent on the horse moves to the right and quickly cross to the other side of the path. You will find a hole in the palisade shown in the picture - quickly squeeze through it. 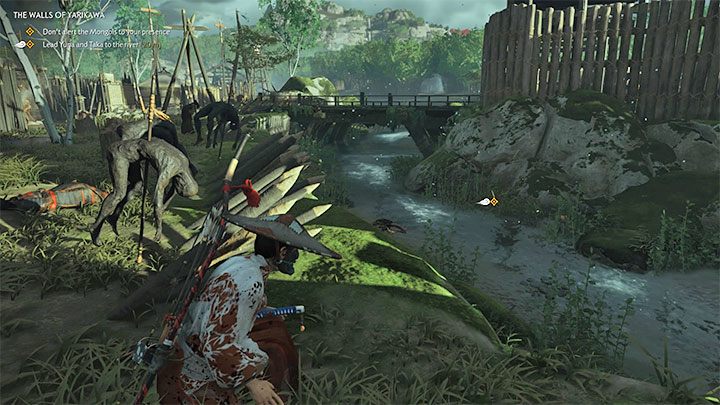 There are new opponents to the left. Go slightly to the right to get around them while keeping as much distance as possible. Head towards the river that separates the fortress' palisade from the Mongol encampment.

Lead Yuna and Taka to the secret passage 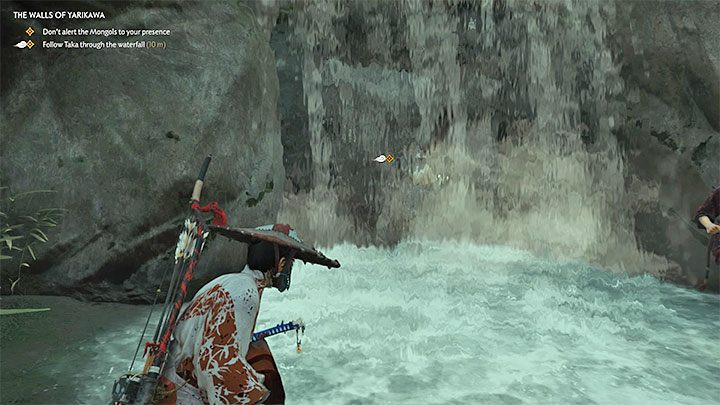 After jumping into the (shallow) river turn right. Go ahead and don't step out of the riverbed for a while. You must reach a small waterfall shown in the accompanying image. You need to pass through this waterfall, as the secret passage to the fortress is hidden behind it. 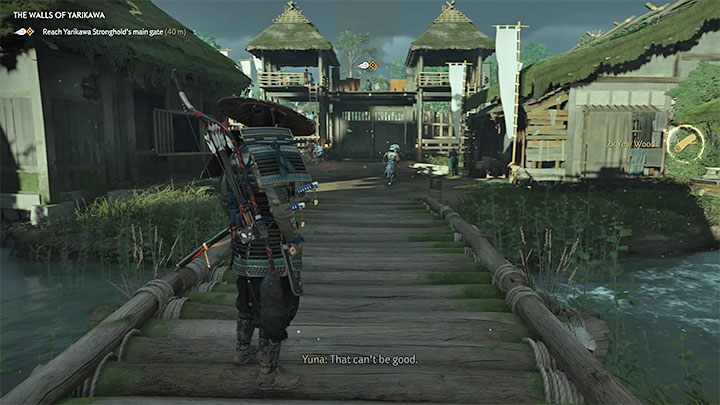 Go through a short tunnel and use a ladder. After the heroes are stopped by the guards, follow them towards the main gate of the fortress. A cut-scene will depict a speech by a Mongol general Temuge trying to persuade the people of the fortress to surrender.

The next part of this mission involves meeting Ujimasa, the ruler of the fortress. Listen to a conversation with him.

Find Taka at the Swordsmith's shop 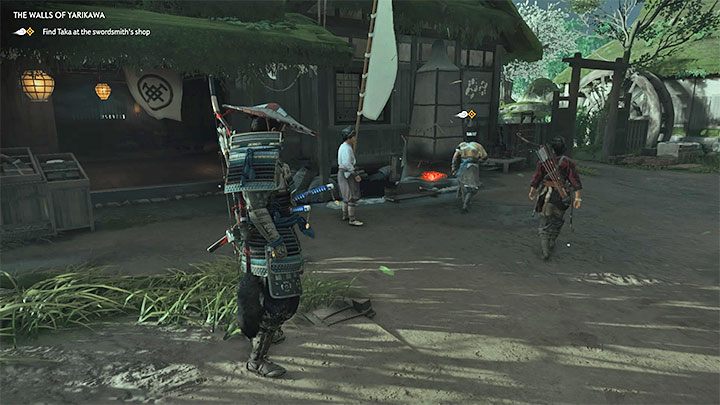 Your final objective is to find the swordsmith's shop that is inside the fortress. Approach Taka and listen to the conversation that ends the described quest.