This page of our Ghost of Tsushima guide contains a detailed walkthrough of The Iron Hook story quest. Beginning from this mission, you'll be able to use a very useful gadget - Grapple Hook. Jin must use the grapple hook to infiltrate the Mongol fort and rescue the prisoners. Our walkthrough will help you in avoiding potential ally deaths.

Get to The Forge with Yuna 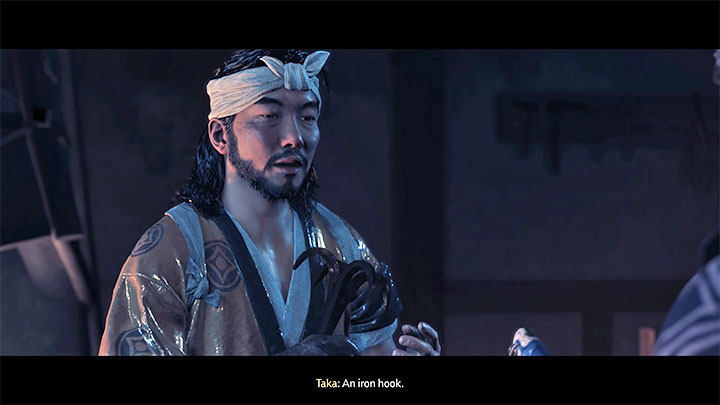 You can begin this task after completing all the story quests described in previous pages of our walkthrough. Jin must help all his allies and capture the forge.

Start by getting to Komatsu Forge. Talk to Yuna. Now go to the main building of the Forge to talk with Taka. You will receive a very important new gadget - Grapple Hook. 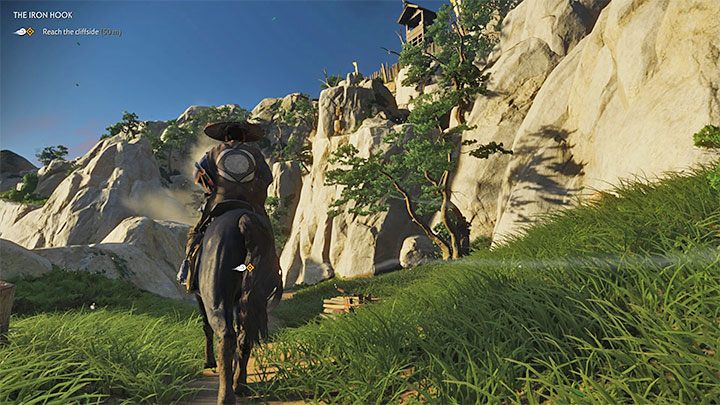 Go outside to talk to Ryuzo. Travel to Fort Yatate. The journey will take place on horseback. Along the way, you'll be joined by a few Straw Hat warriors. In the final phase of your journey, you'll split up with the rest of the team and reach the cliff at the rear of the fort alone. 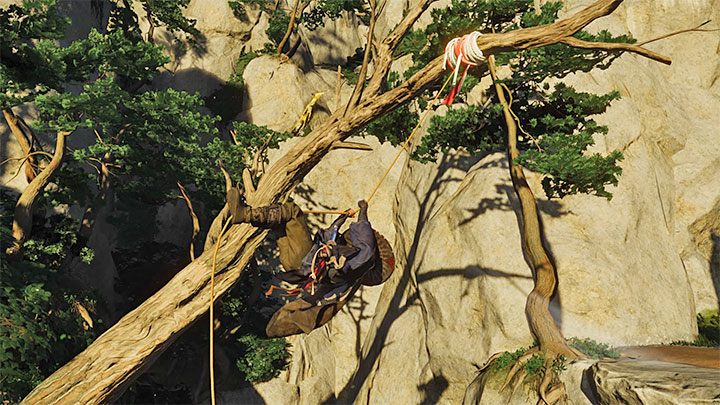 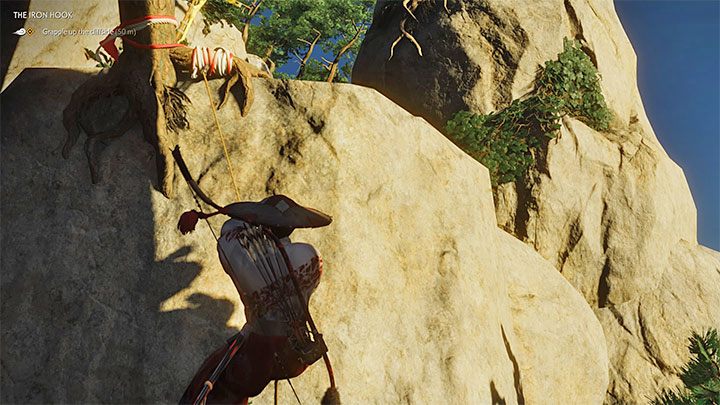 Here you'll use the Grapple Hook for the first time. The grapple hook can only be activated when jumping (that is, after pressing X button) and only if an icon appears that suggests pressing R2. Grapple Hook has 2 main uses: 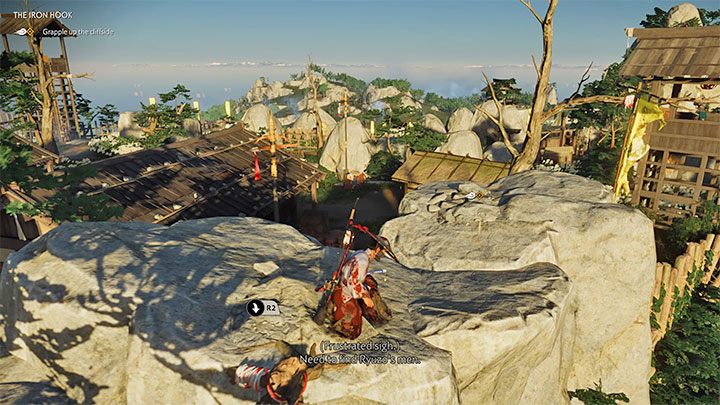 Continue using the grapple hook until you reach the vantage point from which you can see a large part of Fort Yatate. 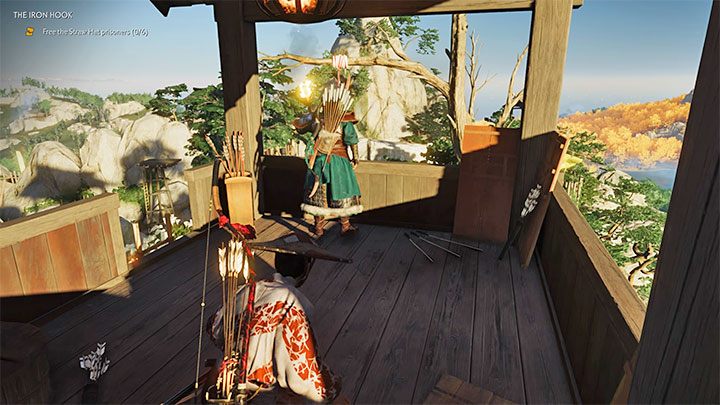 Fort Yatate is a fairly extensive location. Before you can save the prisoners, you should personally remove all or most of the Mongols from the first part of the camp. The reason for this is that if you save the prisoners too soon, they will start following Jin and engage in the fighting. Unfortunately, these characters can fall quickly, and you would have to save them by "reviving" them to prevent the failure of the entire mission.

Securing the camp is best started by using the grapple hook to reach the first observation tower and get rid of an archer. Proceed in the same way with other archers. Use focused listening to locate enemies and reduce the risk of being exposed. 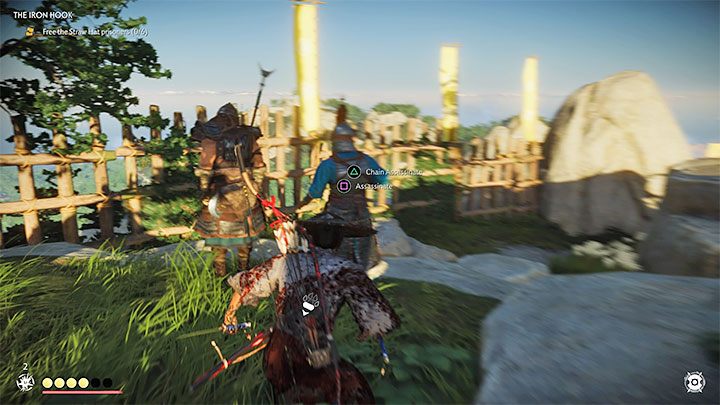 Some enemies will stand close together and you can "solve" these problems in different ways, e.g. rely on 2-3 assassinations in a series (skill purchase required) or drop bombs in the middle of the group.

An interesting idea of solving the problem is releasing several bears kept in cages in the Fort. Remember, however, to quickly distance yourself from the bear and allow it to attack the Mongols. 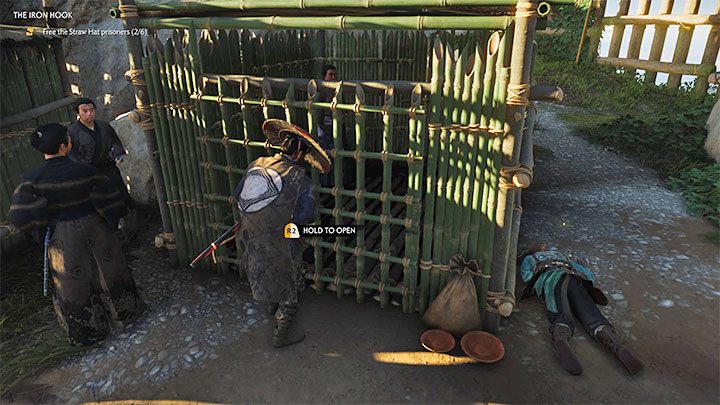 The allies are imprisoned in pairs in three different cages. You can reach them in any order.

Once all prisoners are released, reach the locked large gate and activate the alarm next to it. This will signal Ruyzo and his men to begin the attack. 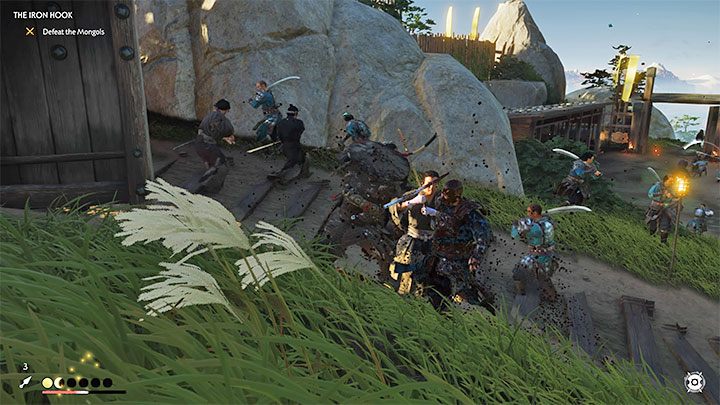 Open a gate leading to the next area of the Fort. You have to engage in direct combat here, so consider swapping your outfit for, for example, samurai armor. The battle can be quite chaotic - try to focus as much as possible on 1-2 opponents at a time to reduce the risk of not being able to avoid or parry some attacks. Like before, use bombs, especially if a group of Mongols lines up close to each other.

After winning the battle, talk to Ryuzo to end the mission.