This page of our Ghost of Tsushima guide contains a detailed walkthrough of The Tale of Ryuzo main quest. The task consists of two parts. In the first part, you will sneak into the lighthouse and then continue to reach the boats. During the second part you'll search Mongol ships and save Ryuzo from death. 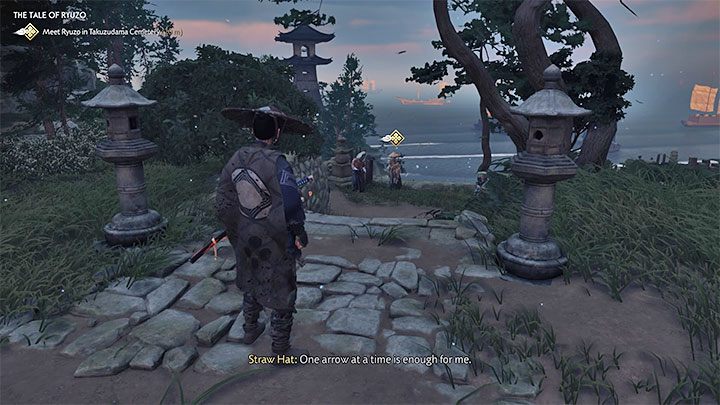 This mission can be picked up after completing another story quest - Blood on the Grass. Meet with Ryuzo at Takuzudama Cemetery, which is located nearby Mongol-occupied areas.

After listening to the conversation, continue down a linear march to the hill from which you can see Fort Ohira and the Tsutsu Lighthouse.

Sabotage the alarm at the Lighthouse 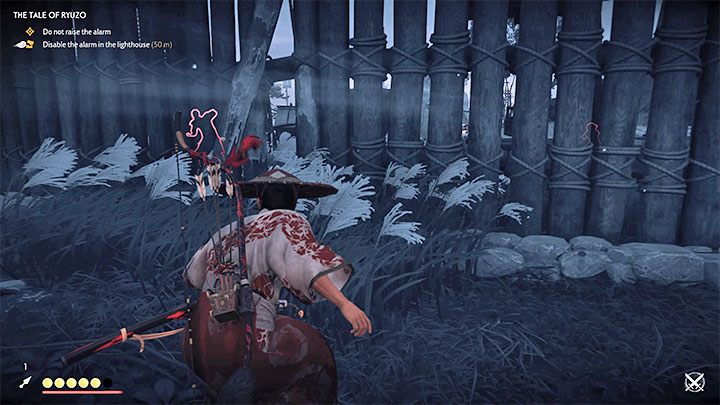 You have to sneak up to the top of the lighthouse without causing an alarm, otherwise, the mission will be failed. If you can, wear a Ronin Attire to make sneaking easier.

Go forward and reach the hole in the palisade. Before you squeeze through it, use focused hearing and make sure it's safe. 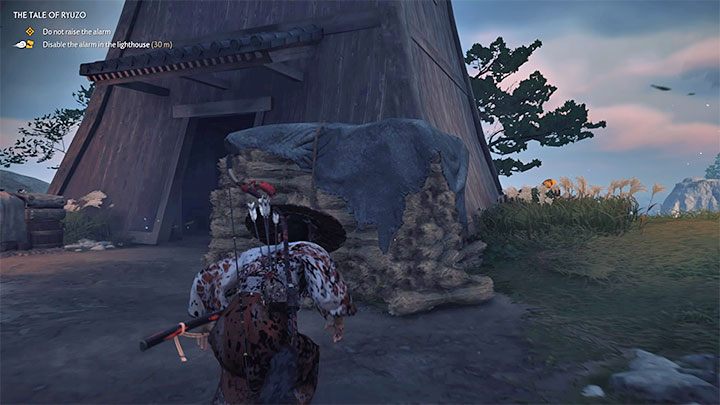 There are not many Mongols in the fort and they are far apart. Despite having to avoid setting off the alarm, you can kill encountered opponents, but of course through silent executions. You should be able to reach the lighthouse entrance without killing anyone.

Climb the ladders to the top (along the way, you'll encounter a sentry - kill him). Sabotage the alarm on a small balcony, then use a torch to light a bonfire at the lighthouse. After lighting the fire, your allies will begin the attack.

Defeat the Mongols at Fort Ohira 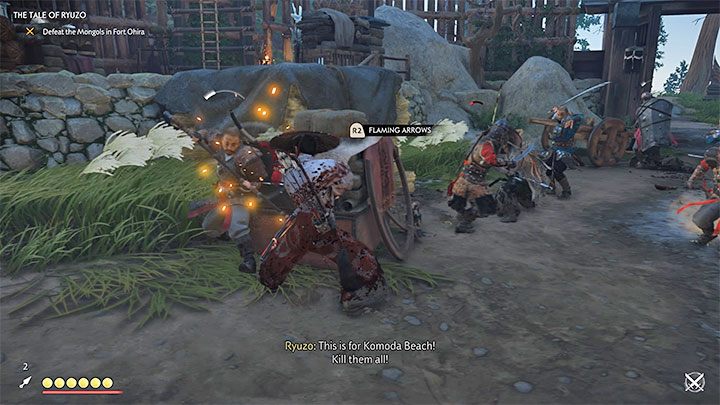 After leaving the lighthouse, join the fighting and assist your allies that are dealing with the Mongols approaching from the fort. The battle shouldn't be difficult, although make sure to change your stance e.g. when fighting shielded opponents.

Due to the fact that the battle takes place in a small arena, use bombs or kunai knives. Do not forget about archers and use the bow to take care of those enemies who stand on rooftops. 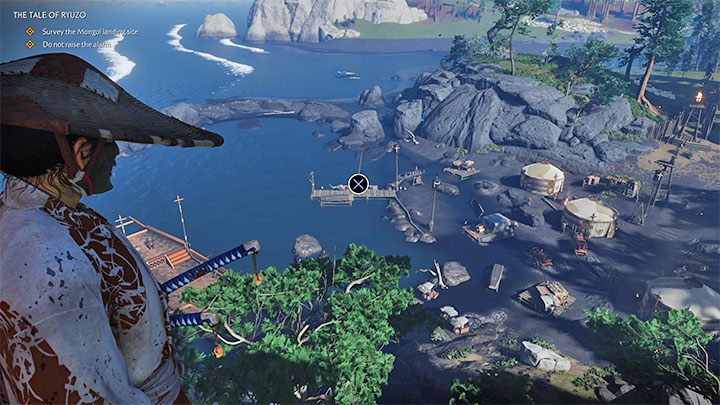 After dealing with all opponents, talk to Ryuzo. Approach the vantage point, from which you can see the large Mongol base. You have to find interactive locations and push X at each one - you'll discover a boat on the pier, a well-guarded main entrance, a hill on which allied archers can be deployed and a supply of red barrels which can be detonated distracting opponents in progress.

Go with Ryuzo to the mongol boat 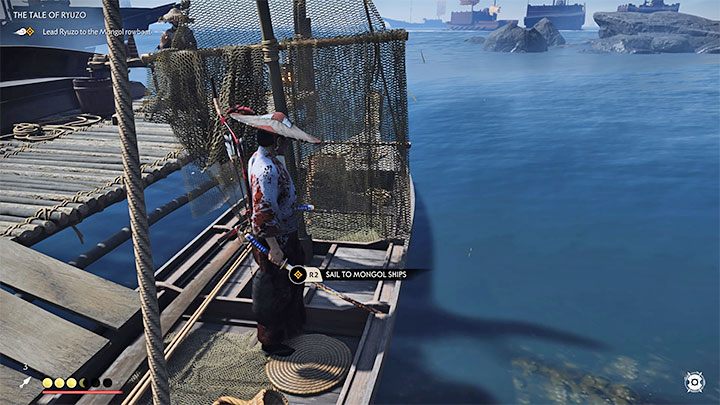 Follow Ryuzo on a path that allows you to descend the hill and approach the Mongolian camp. Archers will fire on the barrel transport and the battle begins. You don't have to join the fighting on the beach, but get rid of those Mongols who are standing in your way.

The boat is your destination. You have to reach the pier, board the boat and hold the interaction button to travel to the first Mongolian ship.

Search the ship for food 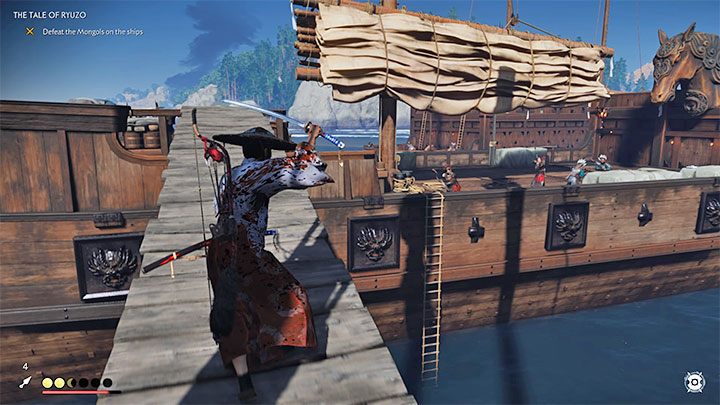 Enter the large cabin and begin searching it - unfortunately, the heroes will not find any food supplies. After Ryuzo opens the door, another battle with the Mongols begins. The fight takes place in a small area - try to skillfully avoid enemy attacks. Again, you can also use kunais or bombs.

Ryuzo will warn you about the archers on board the next ship. Don't try to attack them from a distance. Just run along the footbridge and fight them in hand-to-hand combat. Leave the stronger leader for the end.

Look for food on the next ship 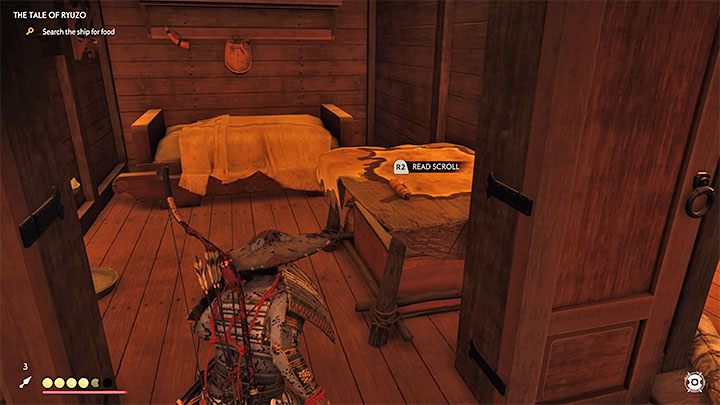 Head for the designated area. You'll come across a few new Mongols which you can suprise attack. You can also help release the bear from its cage and allow the animal to help you in eliminating some of the enemies.

Look in the cabins of the new ship. You won't find food, but you will find a scroll from the picture above - these are Mongol War Plans. 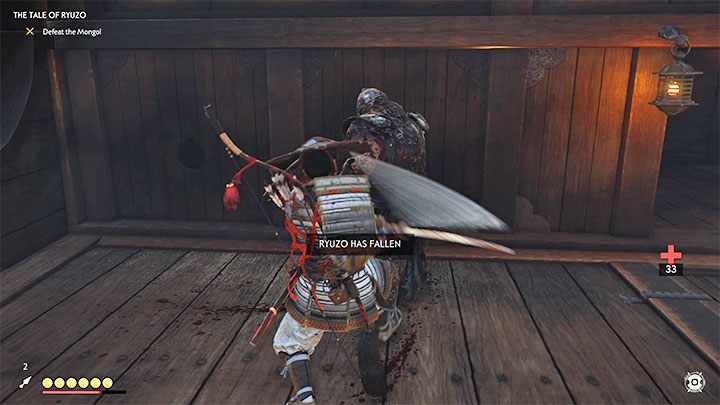 Go back to where Jin and Ryuzo split up earlier (you will encounter a new enemy along the way). Reach the door indicated by the game. Upon opening them, it is revealed that Ryuzo is injured. You have to save him before he bleeds out - unfortunately, a large Mongol enemy will make it difficult for you. It is best to quickly use kunai knives on him and hit him when he is stunned.

After watching the cut-scenes, jump in the water. Jin and Ryuzo automatically return to their camp on the shore and the task is over.