This page of our Ghost of Tsushima guide has a detailed walkthrough for Hammer and Forge main quest. This mission takes place in one large location. We suggest how to help the villagers from the Komatsu Forge and how to win a big battle against the Mongols. 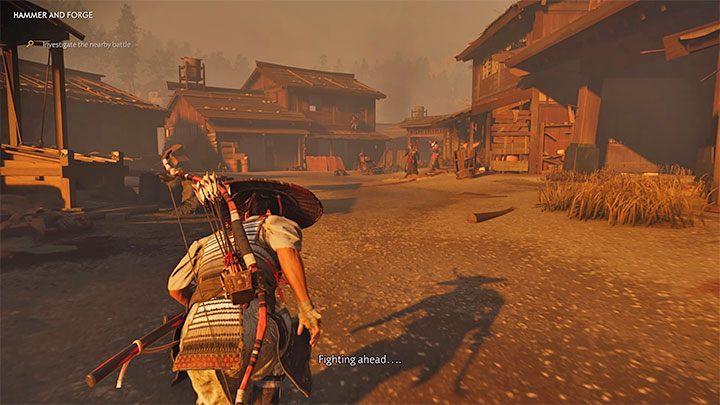 You can start this quest after completing The Broken Blacksmith main quest. You must go to Komatsu Forge. It is one of the larger locations that can be liberated from the Mongols.

After entering the forge area, find the battlefield. Help the allies eliminate the Mongols. 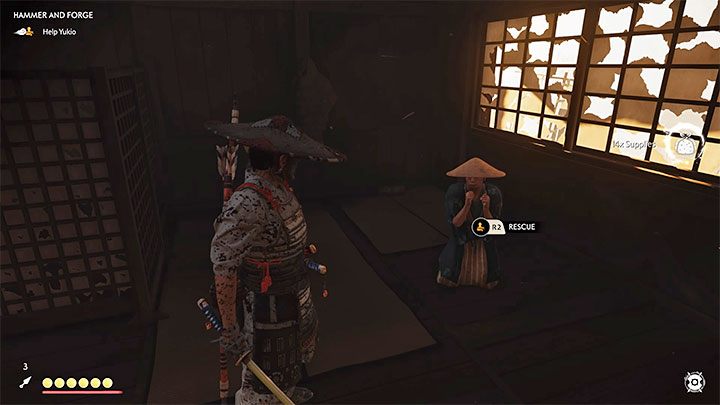 Once the battle is over, speak with Yuna and follow her to the main building of the forge. You'll meet Taka.

Go to where Yukio is supposed to be staying. You can kill or avoid the Mongols encountered along the way. Enter the building and deal with the opponents (preferably quietly). Yukio is hiding on the upper floor of the building.

Help Yukio save his wife 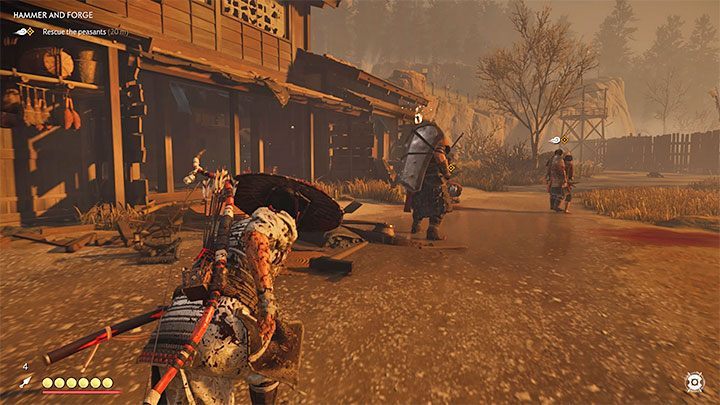 Go outside and head towards the marked building. You have to save the villagers. Try to do this quietly - thanks to stealth attacks, you will be able to e.g. kill the opponent with a large shield shown in the image above.

Bring the villagers to the forge 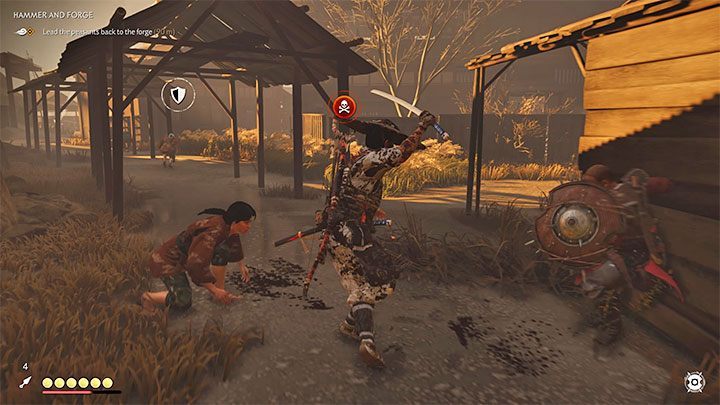 This is a more difficult objective - if you are detected on the way to the forge, the Mongols may try to kill the villagers. This will be signaled with the skull icon. If you fail to save the villager, the mission will fail.

Aim at the back of opponents focused on killing villagers or, a better idea, try to avoid confrontation with enemy patrols altogether. If you come across a patrol, you can just hide and wait until they get away. Talk to Taka one you get back to the forge. 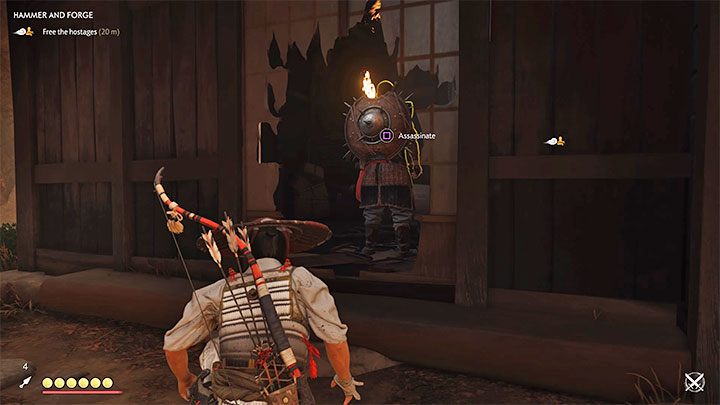 Go to where Yuna is supposed to be. After talking to her, you will be ordered to rescue the hostages. We strongly advise to use stealth - if you trigger the alarm, the enemies may start preparing to kill hostages. Their death will fail the mission.

Use focused hearing to locate and eliminate Mongols with greater ease. After clearing the area, hold R2 to rescue the hostages.

Bring the hostages to the forge 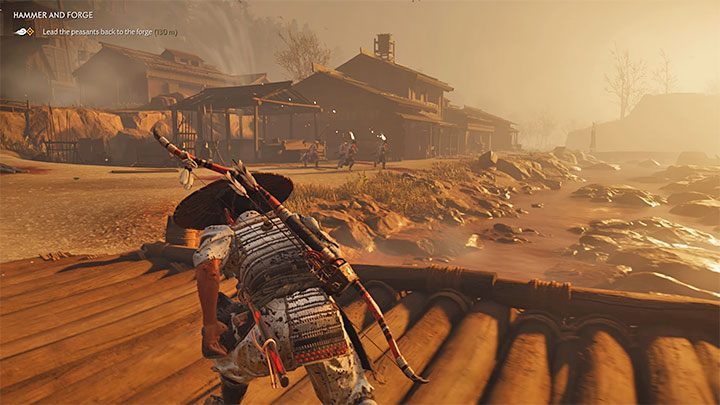 This looks identical to one of the previous objectives of the mission - try to avoid encounters with the Mongols, you don't want to risk the villagers' lives. If an alarm is raised, watch out for the skull icon and kill the Mongols before they can deal a fatal blow to any of the civilians. 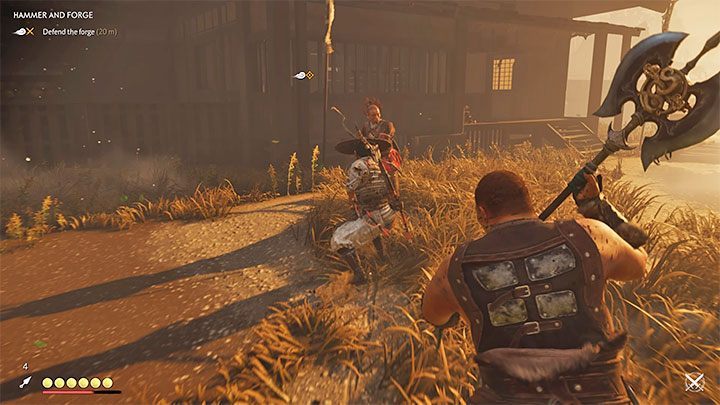 Before you talk to Taka, put on the Samurai Clan Armor and heal the hero - a great battle is about to begin.

Your job is to defend your position near the main building of the forge. Enemies will appear in waves. You will have enough time to kill most of the opponents in the current group before the next shows up.

Pay particular attention to enemy archers - use the bow to kill them or you can reach them quickly. Also, look for them in the tall grass near the forge. 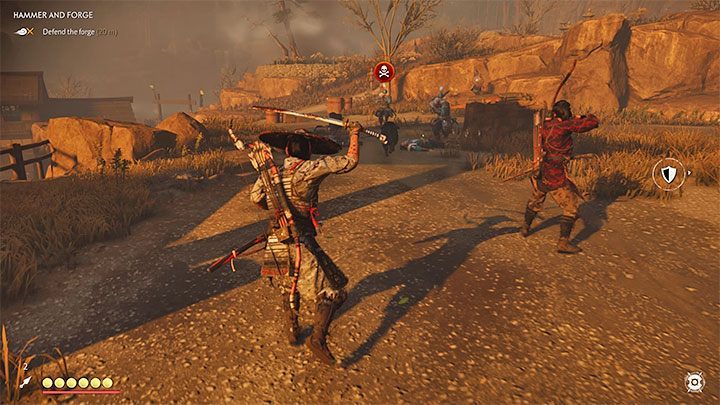 Enemies with shields and spears can be problematic - switch to a stance that is more suitable for this enemy type. Watch out for big enemies, including the leader. If you have any gadgets (e.g. kunai daggers), use them to stun or weaken enemies.

This is the first major mission in which guard dogs appear, though you may already know them from side activities. Their every attack is red - dodge and perform a single attack. 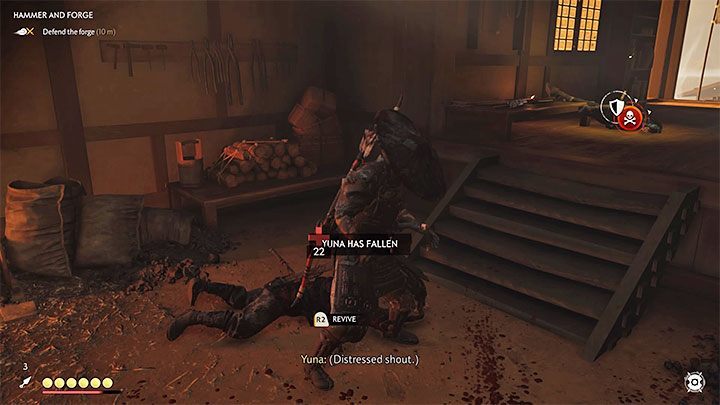 You have to take care of your allies during this battle. Pay attention to skull icons. Fortunately, they don't die after a single attack - you can save a comrade before they bleed out. Secure the area first, because this process takes a few seconds (you need to hold R2).

Win the battle in the forge to finish this quest.