This page of our Ghost of Tsushima guide has a detailed walkthrough for the prologue. This is the first main quest in the game. The prologue has a little bit of fighting and sneaking. There's also a tutorial on the basics of sword combat. The prologue ends with a fight against Khan, although this won't be a full-fledged boss fight.

Battle with the Mongols 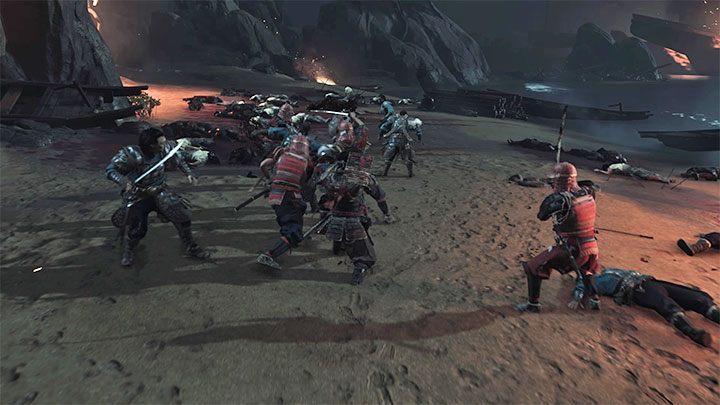 The beginning of the game is very linear. Ride the horse to the beach where the Mongols are. You can attack them without getting off your horse. After a few moments, the hero will be thrown off his horse.

Start following Lord Shimura and the other samurai. You can eliminate single Mongols along the way. Jin will get hit by arrows. After watching the cut-scenes, press X to take the katana. 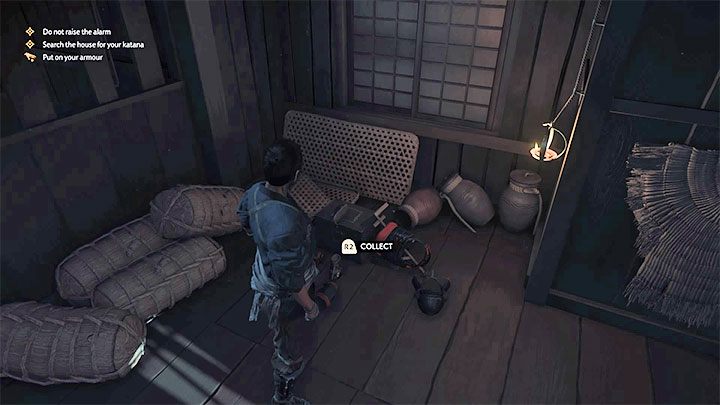 Jin wakes up in a small encampment. The hero is currently defenseless and this means that you cannot let the Mongols detect you, otherwise the quest will end in failure. You can optionally check things in the campsite.

Head towards the village and squeeze between the rocks. Move in a crouched position (press the right analog stick) and avoid the Mongols. Along the way, you can optionally examine footprints in the mud. Enter the cabin and search it to get Broken Armor - equip it. 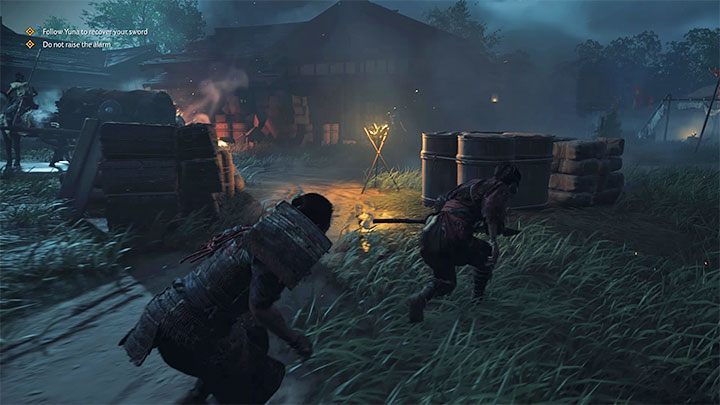 Get out of the cabin - watch a cut-scene during which you will meet Yuna for the first time. Follow Yuna while avoiding detection. Stay close to Yuna and stop if she gives you that order. Crawl under the huts (press R2 to switch to the FPP view).

When you reach the place shown in the image, stay close to Yuna and don't let the detection marker change its color from white to yellow. 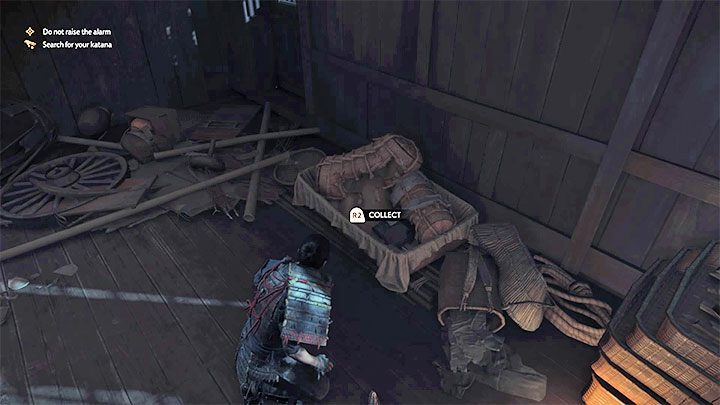 Climb on the roof of one of the buildings (tilt the left stick up and press X). Keep moving on the roofs until you reach the floor of one of the huts. You can look here for supplies and other optional loot.

Go downstairs and get out of the building through a small hole in the wall. Reach the next building, get inside through the broken window, and find your katana. 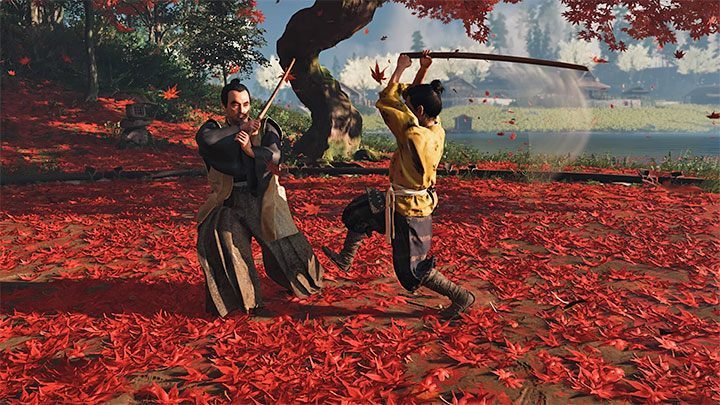 You now play as young Jin who, under the watchful eye of his uncle, Lord Shimura, will learn the basics of sword fighting.

When you return to the present, defeat a single opponent in the cabin. It's a very easy fight, but remember about dodging. 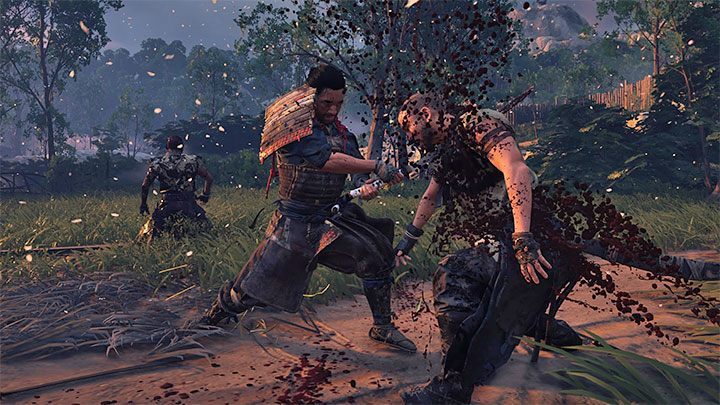 You have to follow Yuna. Along the way you will encounter the Mongols, and in this case fights with them are mandatory. Use the knowledge gained from the tutorial, especially dodging and parrying.

Head with Yuna towards the stable where there will be another group of Mongols. If you get injured, don't forget to press down on the d-pad to heal. 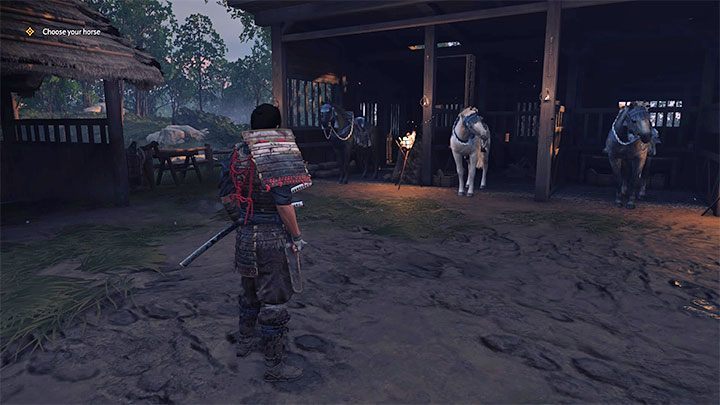 After the fight, talk to Yuna in the stable. You have to choose 1 out of the 3 horses and this choice is irreversible - the chosen horse will stay with you until the end of the campaign. The horses differ only in their color - they don't have different statistics. You have to name the chosen horse. That decision cannot be changed later either.

Reach the castle with Yuna 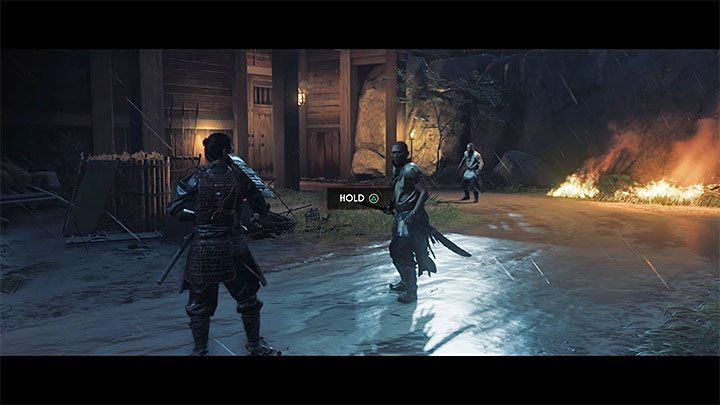 After the cut-scenes, the action moves to the Castle Kaneda. Get close to the castle where you must complete a tutorial on initiating and winning Stand-Offs:

This element will be expanded later in the game - some enemies will perform a feint attack, and Jin will be able to get rid of several opponents one after another.

Going through the castle 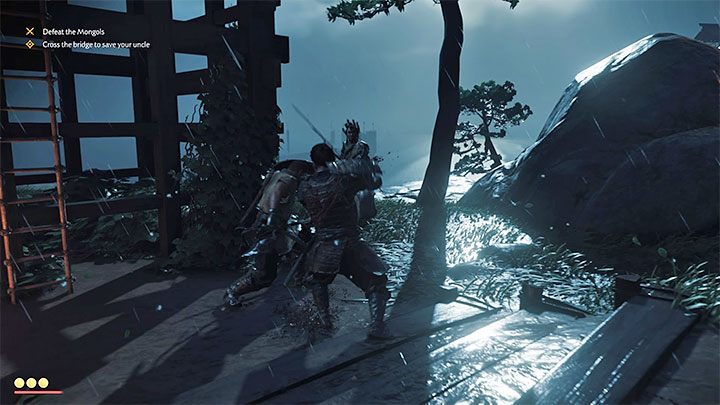 Get rid of the remaining Mongols and go to the next sections of the castle. You will encounter new kinds of threats:

Get on the bridge and do another stand-off. Make sure to release the Triangle at the perfect moment. 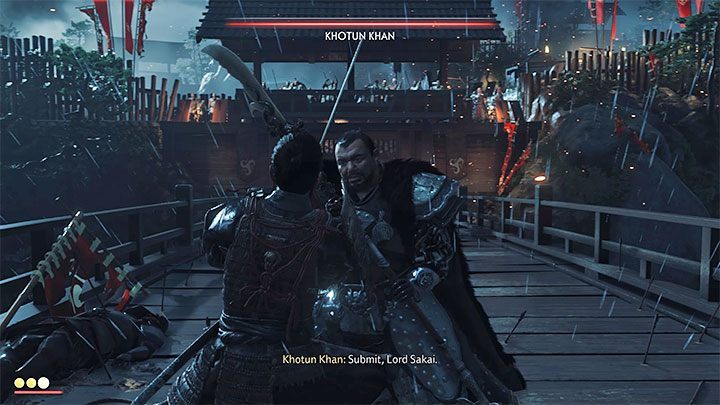 The most important thing is that you can't defeat Khan now. This means that you won't have a full-fledged duel with the leader of the Mongol army. The only thing you can do is to try to prolong it a little bit.

Khan will block your attacks and use his "red attacks" - they are very difficult to avoid even by dodging. This fight has one ending - Jin loses it and falls off the bridge.

Another flashback starts. This sequence has no combat elements. You just have to take part in the funeral ceremony as the young Jin.

Hide in the grass 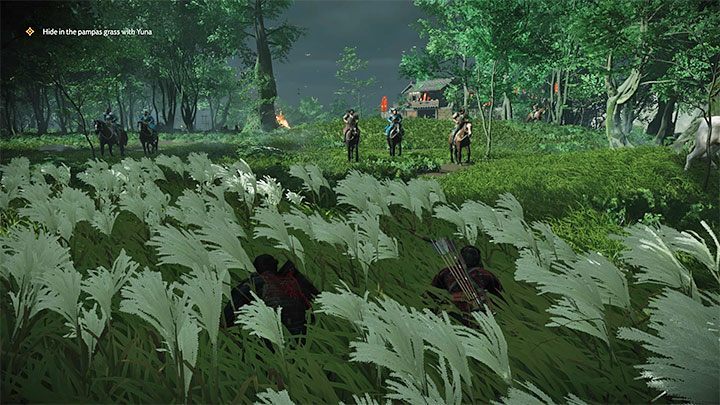 After you return to the adult Jin, start following the wind gusts. They will lead you to Yuna hiding in the forest. Crouch in the tall grass to avoid detection by the Mongol patrol.

After the enemies move away, press left on the d-pad to call your horse. After completing a short ride and reaching a large glade, the quest will end.