This page of the Ghost Of Tsushima game guide includes a list of the main types of secrets. You will find out what collectible types are in the game and what are the rewards for finding individual secrets. Some of them can help with character development and improving the equipment.

For information on where important secrets can be found, see the separate chapter titled Collectibles and secrets.

How to find the secrets easier? 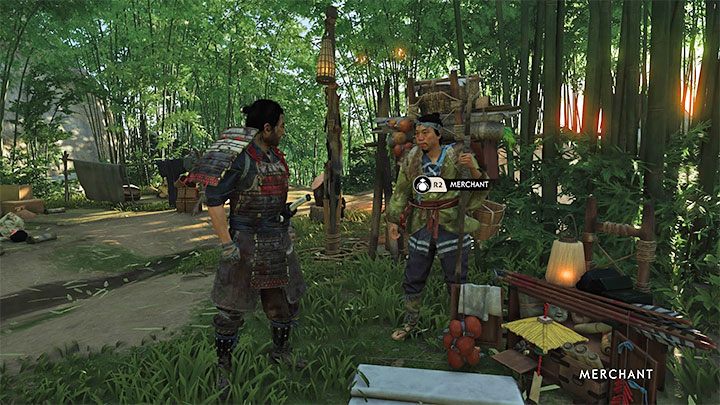 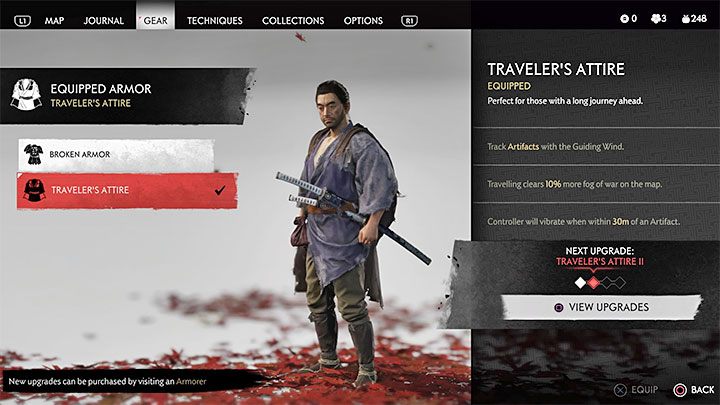 Traveller's Attire, which you can receive for free from the first merchant you encounter in the game world, is very helpful in finding collectibles. This outfit is worth wearing during the free exploration of the game world and after clearing each location of enemies. The key features of Traveller's Attire include:

Try to improve this outfit, especially to increase the effectiveness of the vibrations - ultimately it can help you find secrets that are up to 60 meters away. 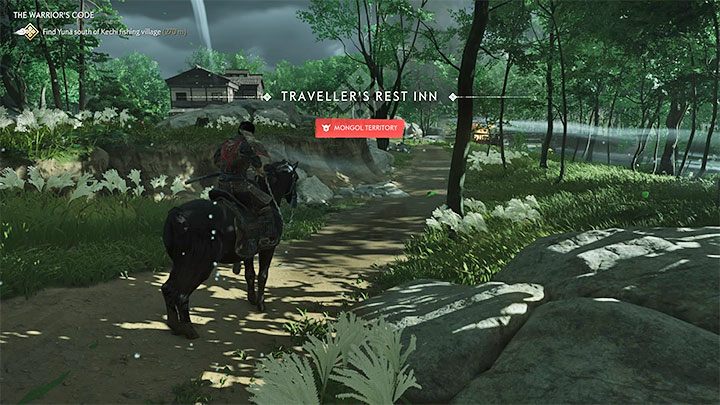 Comment: you can find locations occupied by the Mongols on the world map. These are both places that previously belonged to the people of Tsushima (e.g. the inn), as well as the camps constructed by the Mongols during the invasion.

Your main goal is always to get rid of all the Mongols from a given location. There may be a stronger leader among them. Watching the leader from afar and killing him will allow you to gain the progress points needed to unlock new stances - Jin's fighting styles. Each location also has its own unique goals, such as rescuing hostages, sabotaging, or killing several enemies while remaining unnoticed. They are separately rewarded. 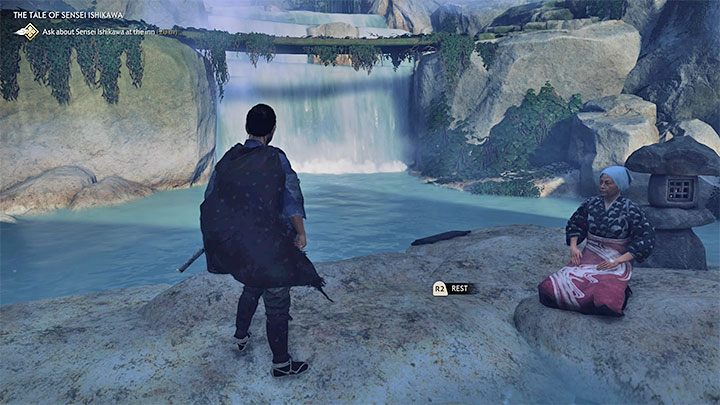 Comment: Jin can bathe in any hot spring found and reminisce about something or someone (this choice is not important).

Each unique bath (i.e. in a separate spring) can minimally extend the character's health bar. Such an increase is permanent. You should look for these locations. 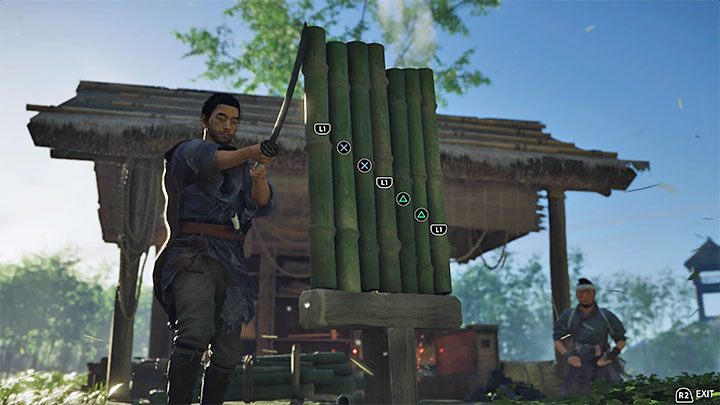 Comment: there is a mini-game with simple assumptions attached to each bamboo location - you have to quickly press the buttons that appear on the screen. This must be done in the correct order and before Jin's katana touches the first bamboo.

The difficulty level of the mini-game gradually increases - you have to cut 3, 5, and 7 bamboos. Fortunately, even if you make a mistake during a mini-game, there is no penalty for it. You can repeat and the combination of buttons will be the same.

Once every few slices of bamboo, you will be rewarded with an increase in the amount of available Resolve. For the record, it is represented by yellow circles and is used primarily to heal the hero. 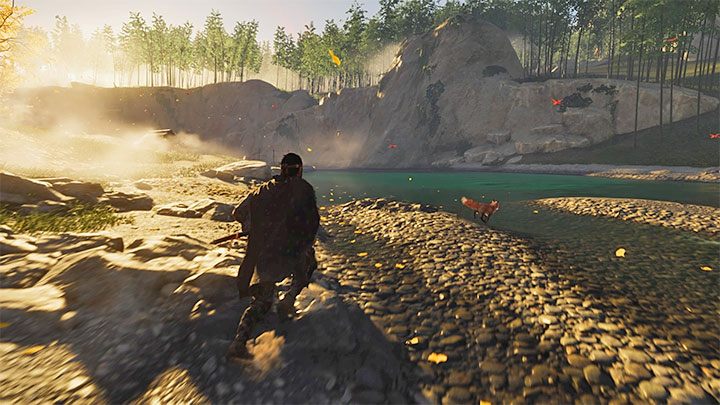 Comment: at every fox hole you'll meet a friendly Fox. You can start following it to one of the Inari Shrines (these locations are described below). When tracking the Fox, try to avoid fights and other unnecessary activities so as not to lose it and not repeat the entire sequence from the beginning. 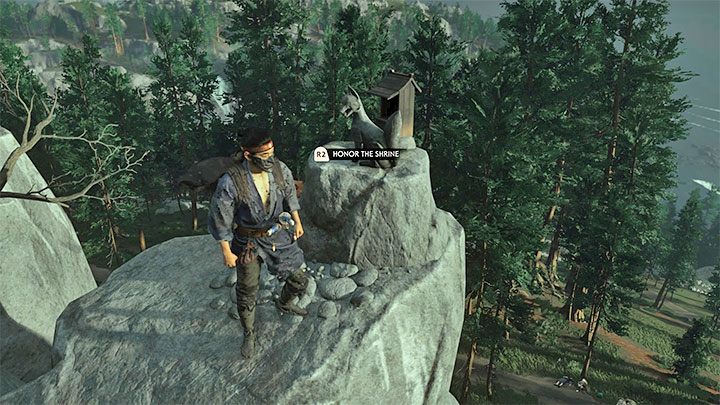 Comment: you will be led to each shrine by a Fox encountered near a fox hole (description above), and it is theoretically possible to find it yourself. This is unlikely, however, as shrines are not marked on a map and are often in well-hidden places, such as on hard-to-reach rock shelves.

Jin can pray at any of the Inari Shrines he discovers. Once every few of these activities, you will unlock a new charm slot in the inventory. This means that you will be able to have more active charms at any given time, and therefore benefit from more passive bonuses. Charm bonuses involve lengthening the health bar, inflicting more damage with a certain type of weapon, or delaying hero detection by opponents.

You can unlock up to 6 charm slots. This does not mean, however, that it is not worth continuing the search for shrines, because from that point on you will start to be rewarded with the right charms. 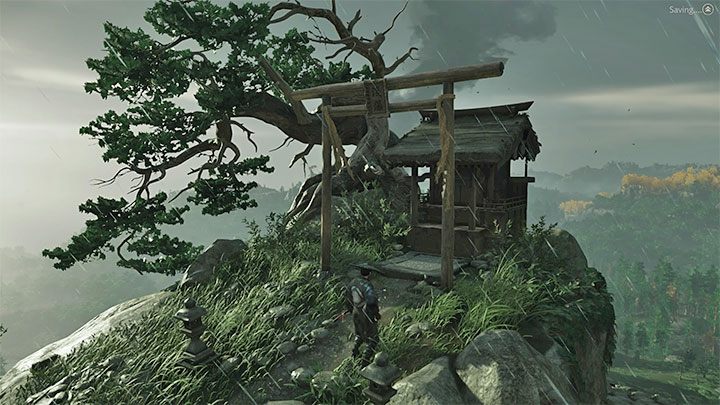 Comment: this type of shrines stands out because they are in places that are very difficult to access. A longer climbing section is required to reach each of the shrines. It is worth noting here that it will be possible to reach some Shinto Shrines only after you have gained a grapple hook as part of the main plot.

Jin may pray after reaching the shrine. It is rewarded with a charm and a rare crafting material. 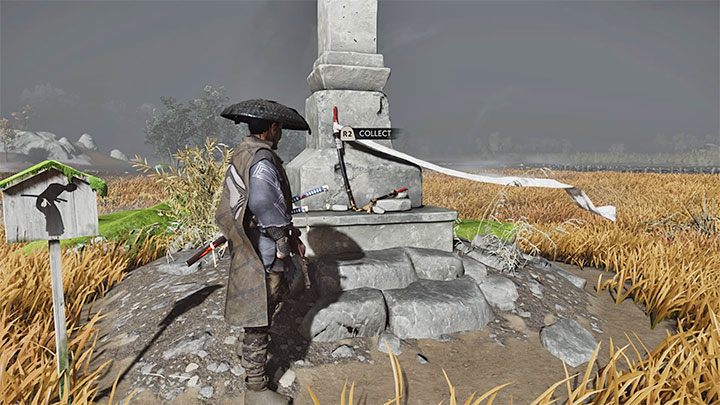 Comment: at each of the pillars, Jin can find a set of swords - a katana and a tanto. However, these are not entirely new weapons to use. The collectibles are treated as Sword Kits. This simply means that you can only change the appearance of the swords and their sheaths. So these are purely cosmetic changes.

Changes in the appearance of weapons and sheaths can be made at any time from the inventory level. All sword kits will be visible, including those you have acquired in other ways (e.g. completing quests). 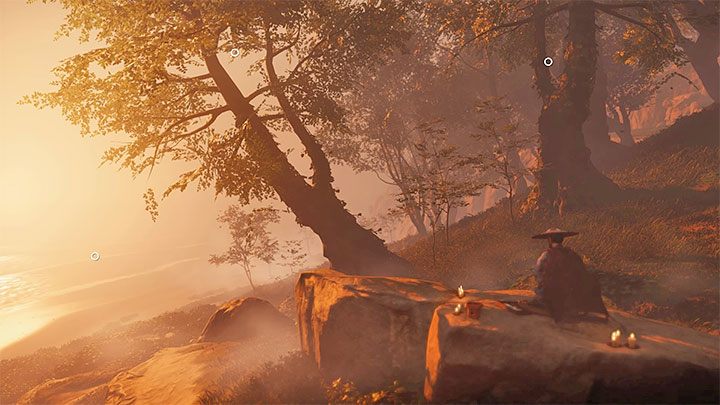 Comment: in these locations, Jin can meditate and compose poems. The latter is done by selecting successive passages of the poem by selecting the landscape elements. This does not affect the reward for "completing" the haiku, but it is interesting that Jin will always read the composed poem.

The reward for preparing each poem is a headband. These are purely cosmetic items that allow you to change the character's appearance. 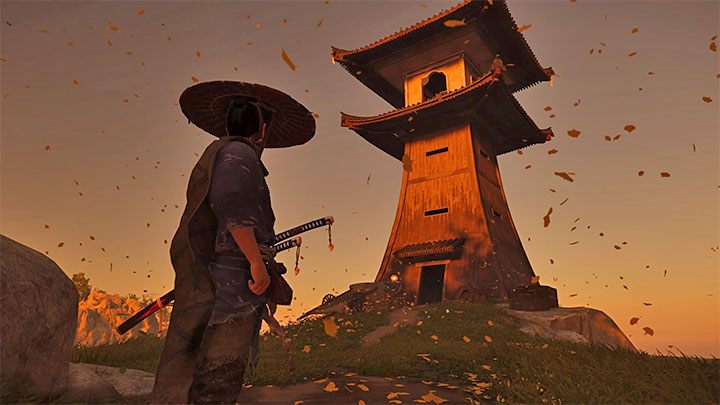 Comment: lighthouses are found as you travel along the coastline. These may be abandoned locations or structures located in areas occupied by the Mongols - in the latter case enemies must be eliminated or bypassed.

In order to "complete" a lighthouse, Jin must climb a ladder to the top and light a fire in it. Each such action is rewarded with a slight Legend Increase, thus bringing the hero a little closer to being promoted to a higher level of experience. 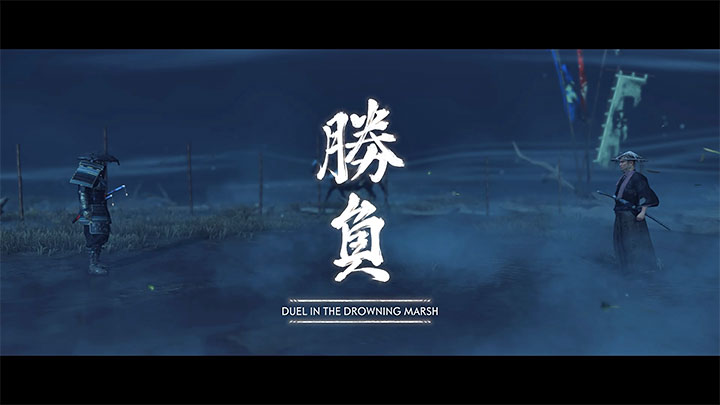 Comment: any such location is an arena where Jin can fight an honorable duel. The opponent to face is treated as a mini-boss. This means that he has a long health bar and that he is much more difficult to defeat than regular enemies.

Winning all duels (including those from certain quests) is a requirement to unlock one of the trophies in the game. In addition, each such victory is rewarded with a Legend increase (or experience points). 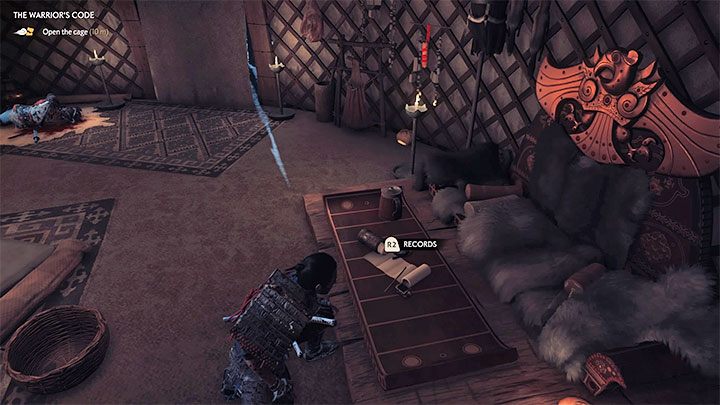 Comment: These are documents that you can find in different places on the map, with the best chance guaranteed by searching large locations such as villages or Mongolian camps.

Finding 20 of any records (out of 40 possible) is rewarded with a trophy. 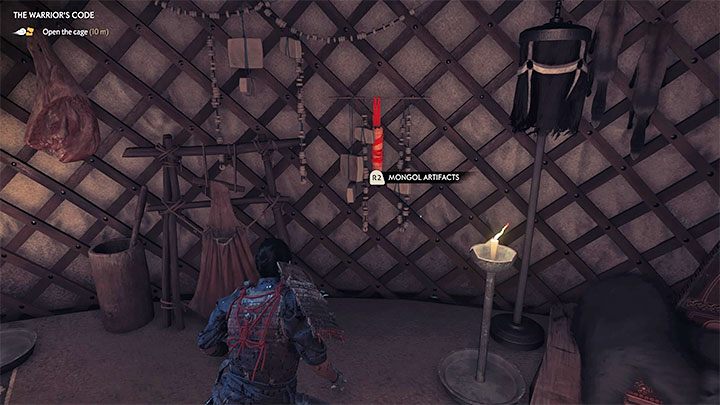 Comment: These are collectibles that are found primarily in locations occupied by the Mongols. These may be places that in the past belonged to the native inhabitants of Tsushima, or military locations that were built as part of the Mongol invasion.

Finding 20 of any artifacts (out of 50 possible) is rewarded with a trophy. 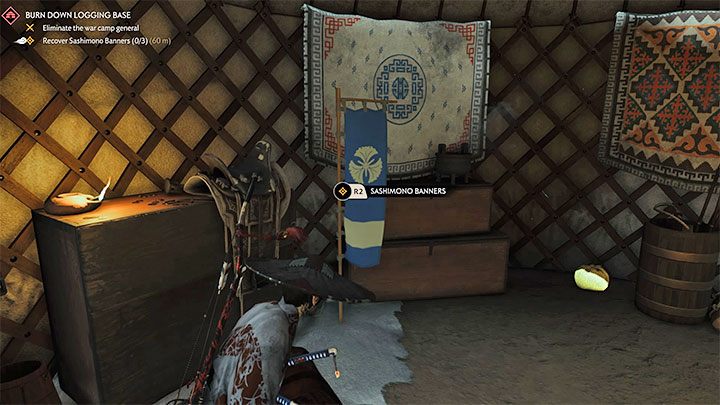 Comment: as with the artifacts described above, you should first look for the banners in those locations that were occupied by the Mongols. Some of the targets of the occupied locations may also be associated with finding these banners.

The banners are used only after the liberation of the Komatsu Forge as part of the Hammer and Forge main quest. There is an NPC on the site of the Forge. Return to him with banners. In return, Jin can acquire new saddles for his horse. Unfortunately, they do not have any unique properties and only differ in appearance. 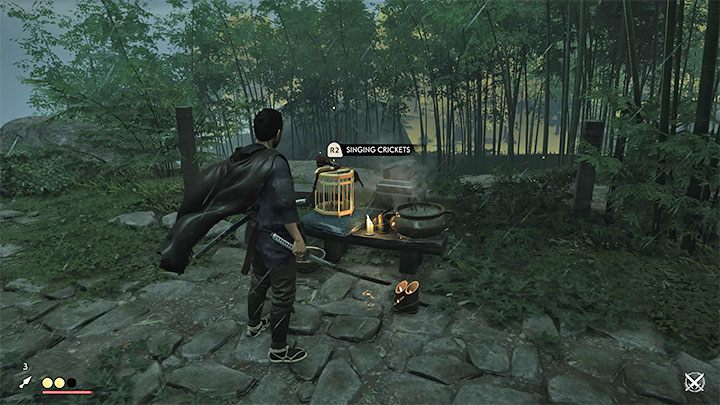 Comment: you have to look not for the crickets themselves, but for the cages in which they are kept. You can find cages in various locations, both those that are occupied by the Mongols and those that are not even marked on the map of the world.

Collecting crickets allows you to unlock new melodies to be played on the flute. For the record, playing the flute allows you to change the current weather conditions. A new melody is unlocked once you find every few cages.