On this page of our guide to Ghost of Tsushima you can find the most important information about combat. Also, we have described the Samurai style available in the game and how to use it properly. You can find out, among other things, in which cases combat is mandatory, how to behave during melee combat, how to use stances and standoffs, how to fight with ranged weapons and how to defend yourself against ranged attacks.

When I have to engage in combat? 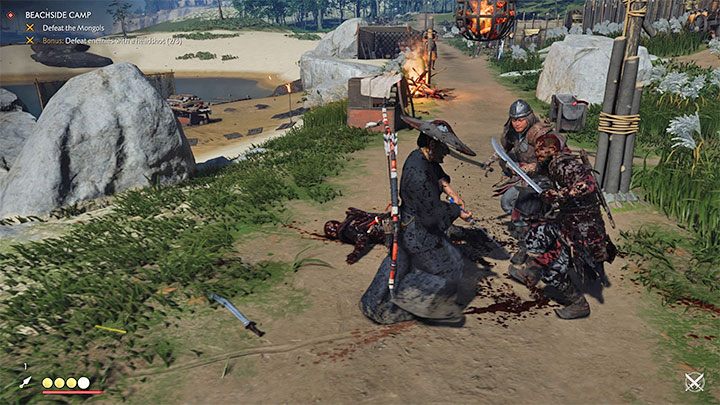 You can initiate direct confrontation yourself or they can start when you make too much noise (or a mistake) while sneaking around. In the latter case, you may decide to flee or face the enemies. If you are not going to run, don't switch the armor to one that provides more defense and to choose the right stance (more about these later).

Direct combat is mandatory in some quests. They can occur, for example, after cut-scene or after entering a new location.

How to prepare for combat? 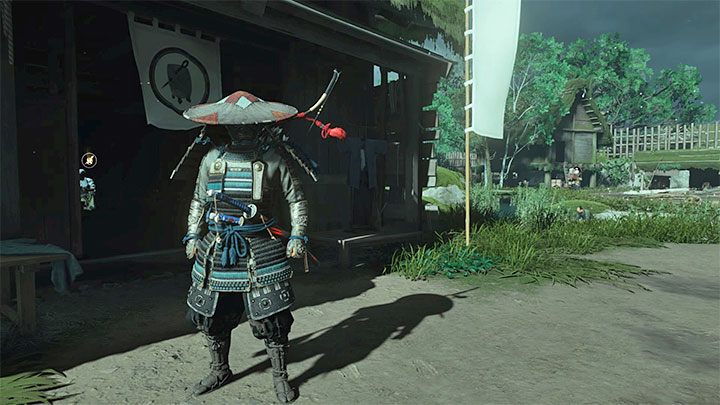 You can prepare for most of the direct fights - try not to ignore this step. The most important step of preparations is to wear armor that is best suited for direct combat.

The first good armor for close combat is the Samurai Clan Armor. It reduces the received damage, increases the hero's health bar and allows you to restore more resolve (necessary, e.g. for healing). 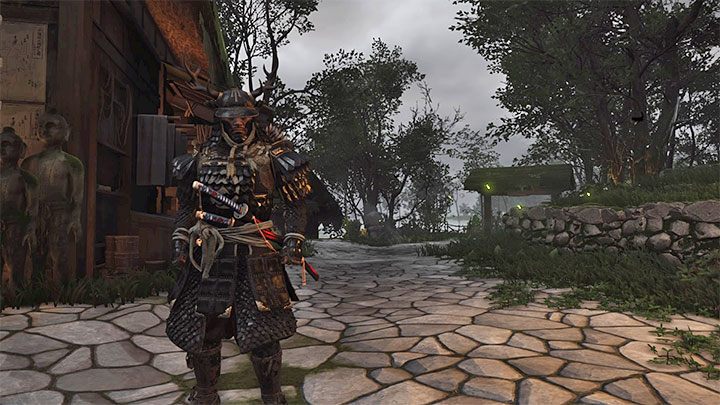 Another good armor for close combat is the Sakai Clan Armor. It increases melee damage, gives you more health, and lets you kill more enemies in a single standoff.

Both armors described above are acquired by making progress in the plot. However, you can also acquire other armors from, e.g. side quests. Test them all to find your favorite.

Note - You can change your armor at will even after joining the fight. This is done in the pause menu, so the armor swap is instantaneous - you don't have to move away from the opponents. 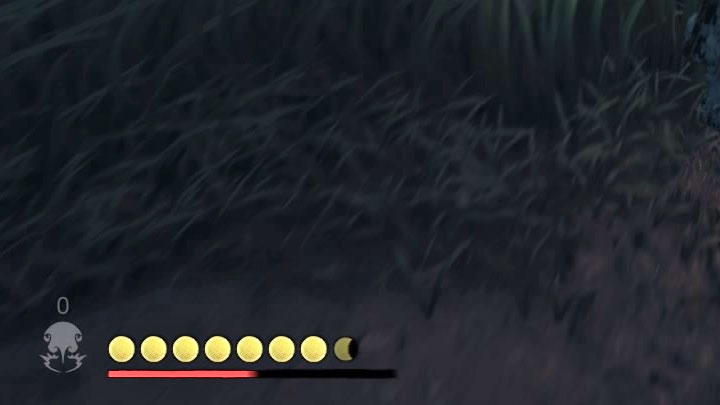 Another important step in preparing for battle is to check the hero's health. Try to start every battle with a full health bar. For the record, you can heal Jin by pressing down on d-pad, but this cost resolve. You can get it by, e.g. killing opponents. 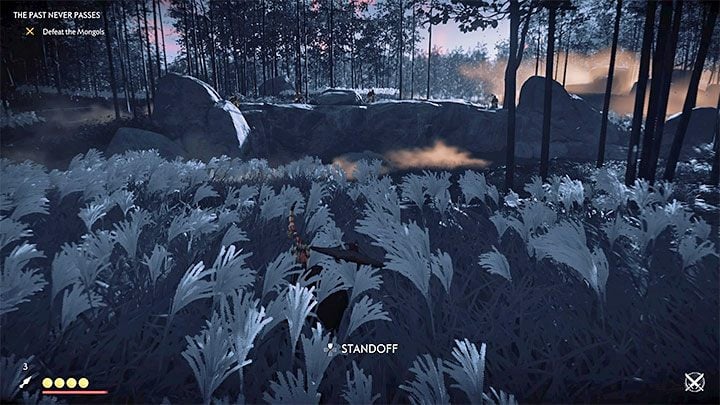 A good way to start a battle is to use standoff. You challenge one or more enemies to a duel. The great advantage of standoff is that any successful attack performed during it kills enemies instantly.

Standoff is only possible if the opponents haven't spotted the hero. Upon approaching them, press up on d-pad to start a standoff. 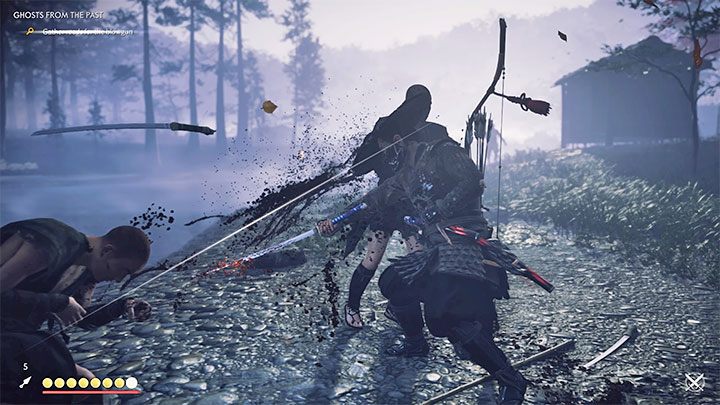 You can try a standoff for the first time during the prologue. However, as the game progresses, this mechanic will be further developed: 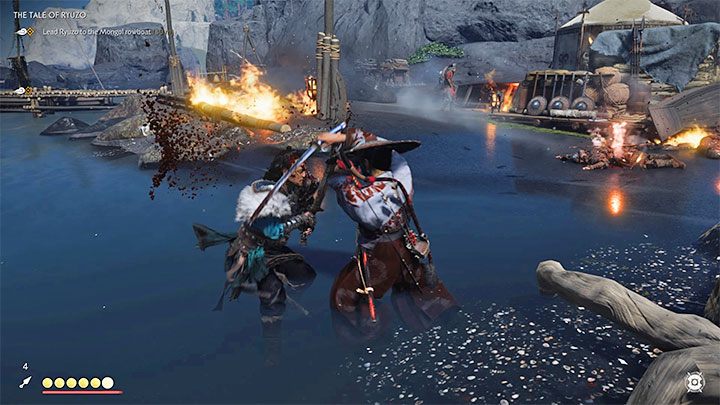 Jin uses only one melee weapon - a katana. The hero is also equipped with a tanto, although this weapon is used during stealth takedowns. Opponents use different types of melee weapons. However, they cannot be picked up. You can perform fast attacks with the Square and slow/special attacks with the Triangle. Perform various attacks are by pressing or holding a button.

One of the most important mechanics of the katana is the ability to parry attacks. This is done by pressing the L1 button once. Parrying works only when it is activated at the perfect moment - just before the enemy attack reaches Jin. After successfully deflecting the strike, you can attack the stunned opponent.

Try to unlock Perfect Parry as soon as possible. It unlocks much stronger counters. To perform a perfect parry, press the L1 at the last possible moment. 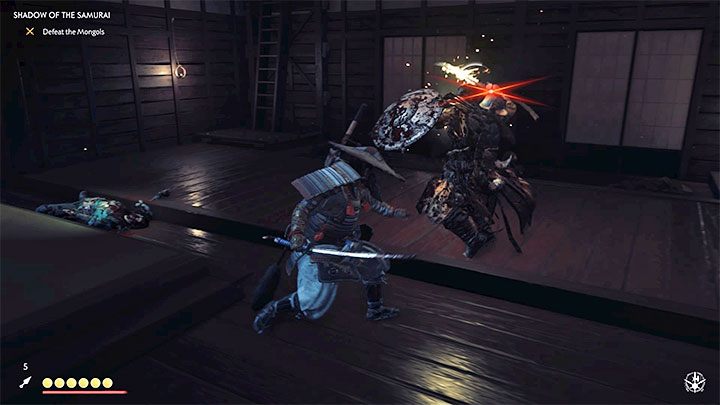 Parrying is not the only technique that protects Jin from attacks. You can also hold the L1 to block. This is a good choice if you are fighting a very agile opponent or have few health points and don't want to risk parrying.

Jin is unable to block red attacks. The only way to prevent a hero from getting injured is to perform a roll or dodge. Press the Circle to use these moves. When the enemy attack misses, you can do the same as with a successful parry - try to go into the offensive. Note - Some opponents perform several red attacks in a row. It is best to wait until they complete the entire sequence instead of trying to interrupt them.

Perfect Dodge can be unlocked later in the game. It works much like a perfect parry - if you dodge at the last possible moment, the game will slow down for a while and you can follow with a strong attack. 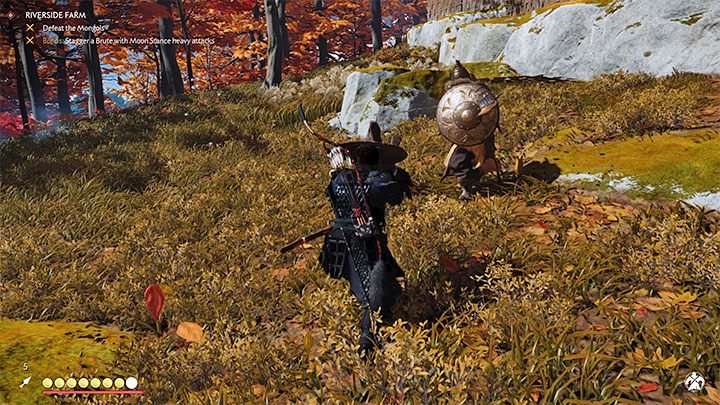 Stances are a very important part of the combat - we have described them in more detail in a separate chapter of the guide. Stances are different styles of combat with a katana. Each stance helps you eliminate certain types of opponents. You can switch between them on the fly by holding the R2 button. Of course, not all stances are immediately available. In order to unlock the next stances, you must observe and kill enemy leaders.

To make the most of Jin's abilities, be sure to switch between the stances during a single fight. Everything should depend on who you're currently fighting. You should also try to improve the stances - this will unlock new series of attacks and strengthen the attacks for a given stance. 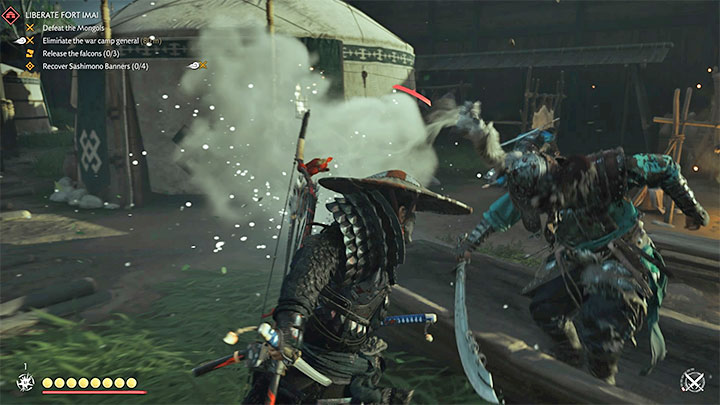 There is a possibility that you may be surrounded by a few stronger enemies during direct combat. This is a very dangerous situation, because individual enemies will not wait for their turn to attack. While you'll be focused on attacking one enemy, other opponents may also start attacking you.

There are two main solutions to this problem. The first option is to quickly move away from enemies in order to fight them from a distance or eliminate them one by one when as they run towards Jin. The second way is to use smoke bombs, which can blind enemies very effectively. You can throw smoke bombs not only to escape, but also to attack enemies more easily. You can also perform executions on enemies blinded by smoke bombs, including those that were launched during the Chain Assassination ability, which allows you to quickly murder 2 or 3 enemies that are standing close to each other. 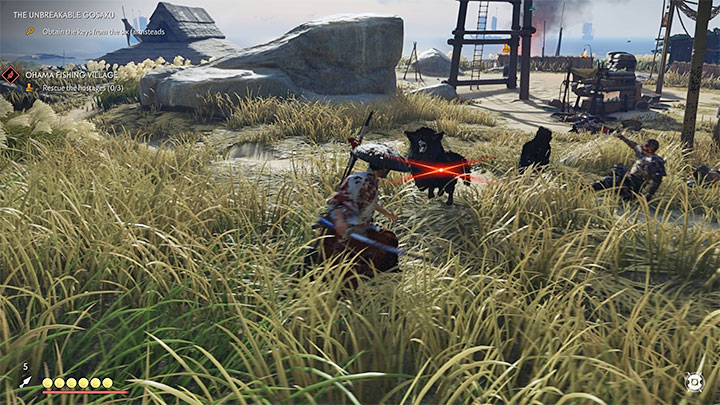 In addition to humans, you will also have to kill guard dogs and bears. Confrontations with them can be very demanding, as the animals use red attacks very often, which can lead to the main character being bitten, knocked down or even knocked backwards.

Try to eliminate the animals before they get close (more on this in the next sub-section dedicated to the Ranged combat). As for melee combat, we recommend doing one dodge and then attacking once. Don't use too many attacks after a dodge, as they will almost certainly be interrupted with the dog's or bear's red attack. 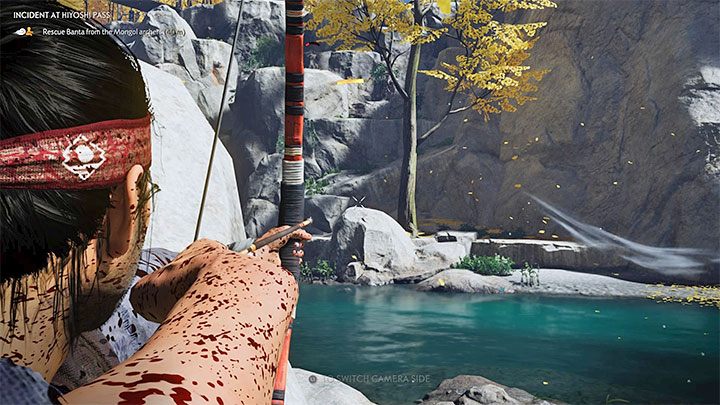 Jin's main ranged weapons are a short bow and a long bow - check out a separate page to learn how to unlock both of these ranged weapons. For the record, a short bow is best suited for rapid shots, while a long bow is good for attacking enemies equipped with armor and headgear. The latter increases the chances that a single arrow will kill the opponent.

You can use different varieties of arrows. The most interesting are flaming arrows, which allow you to set enemies on fire or do the same with elements of the environment (e.g. tall grass), and explosive arrows that are ideal for attacking groups of enemies standing close to each other.

Concentration skill helps in firing the bow in combat. After buying it, you can press the left analog stick to activate slow-motion for a brief moment. This will make it easier to hit moving targets.

It's worth noting that the bow can be equally useful for stealth attacks and for executing enemies without alerting the entire area. Check out the Stealth page to learn how to use them while sneaking. 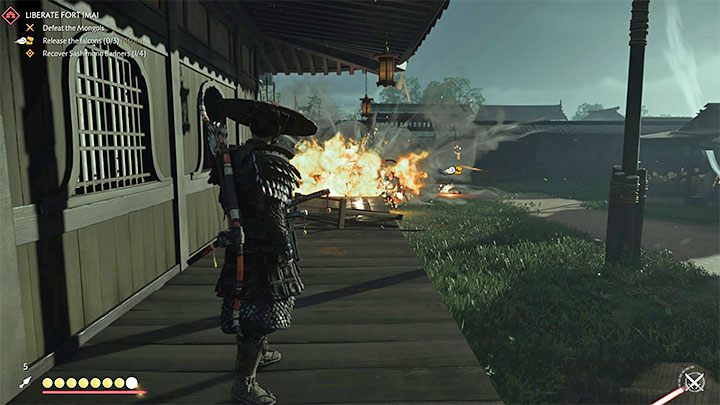 Jin also has various gadgets to help him fight at a distance. These gadgets are: 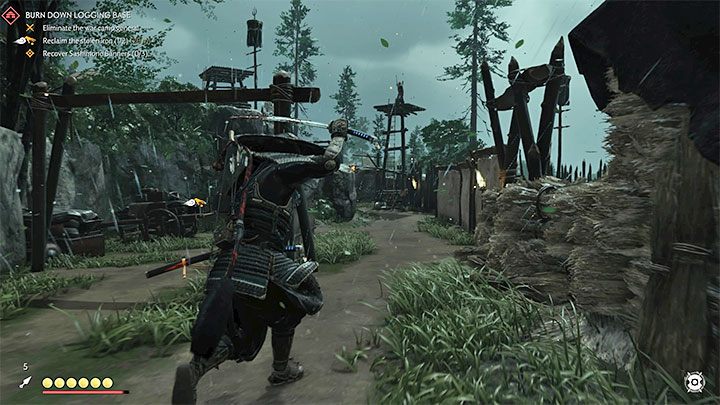 Jin can also encounter enemy archers and be forced to defend against their attacks. By default, the best way to deal with archers' attacks is to use dodges and rolls done with the Circle. Wait with dodging until you hear an archer's shout. This signals that he is about to shoot. 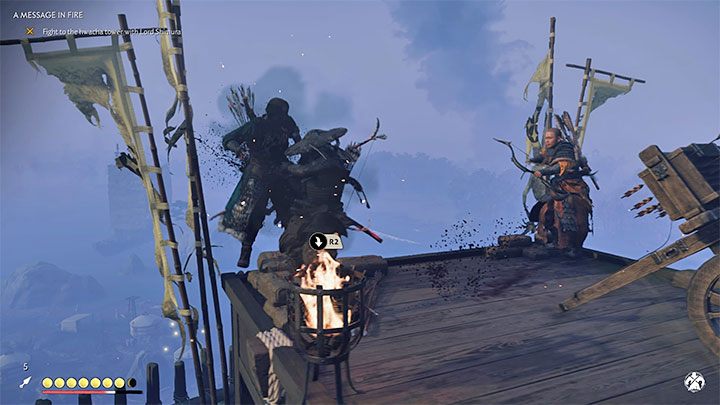 After making enough progress, you will start encountering "elite" archers. They are distinguished by two basic elements - they can release several arrows in a row and shoot flaming arrows. Perform perfect dodges, which are especially important in case of fire arrows. If Jin is set on fire, start rolling (press the Circle twice) to put out the flames.

You can (and should) kill archers in close combat - they aren't very skilled with using swords. Archers also don't use any armor meaning that they can die pretty fast. Try to locate them right after starting a battle and be ready for more archers to appear with reinforcements.

Kill archers using your bow if they are in hard-to-reach places, such as watchtowers. Hide behind covers, pull the bowstring and leave the cover for a brief moment to shoot. The Concentration skill mentioned above may also be helpful. 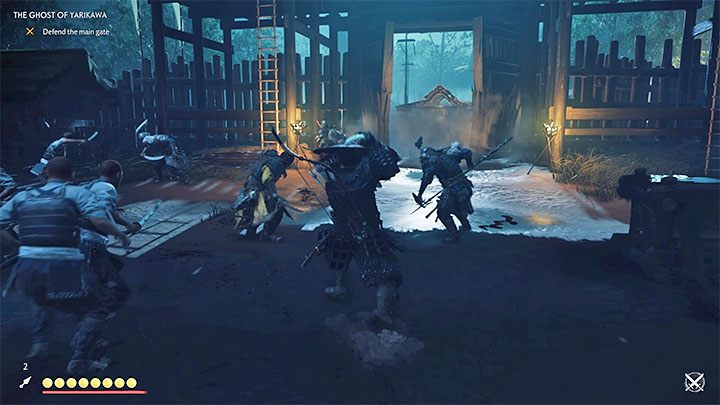 In some battles, Jin can be accompanied by allies. A good tactic is to attack the same opponents your comrades are currently fighting. The reason for this is that the opponent will be focused on attacking your ally. This is very helpful in attacking from the flank or the back, which in many cases can end immediately with a fatal blow.

Companions are not immortal - they can be knocked to the ground and start bleeding out. React quickly - their death can fail a mission or make you lose the battle. You have tens of seconds to save your companion. However, healing also takes time. You can solve this problem in two ways - use your best attacks to eliminate nearby enemies or blind them with a smoke bomb. Each of these options will help you to safely reach an ally and "resurrect" them.