This page of the guide to Genshin Impact contains useful information about an event called Summertime Odyssey, which appeared on July 7, 2022. You will learn what prizes you can get for taking part in the event, how to complete the individual challenges, and read other useful tips. 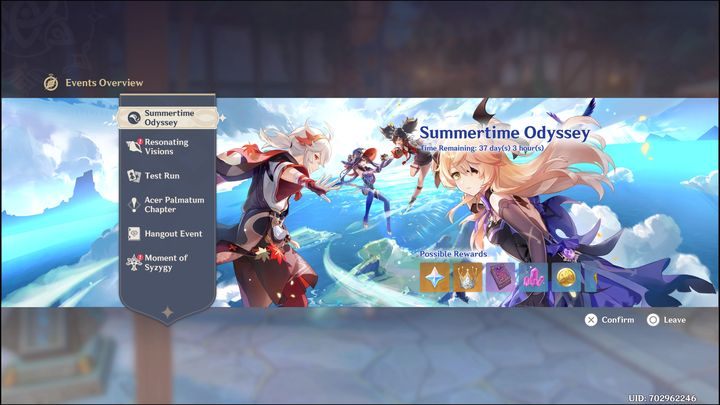 Summertime Odyssey is a summer event that will last about 40 days from day one. It has been divided into several chapters that will unlock after some time. 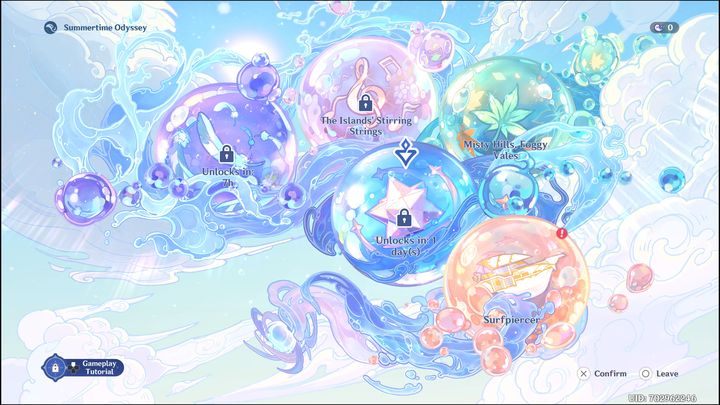 A padlock icon over a particular chapter means it has not yet been unlocked. The time underneath it will indicate when you can unlock it. The event itself is available to players who have at least 32 Adventure Rank and have completed Archon Quest Chapter II: Prologue "Autumn Winds, Scarlet Leaves" and Mona's Story Quest "Astrolabos Chapter: Act I-Beyond This World's Stars". 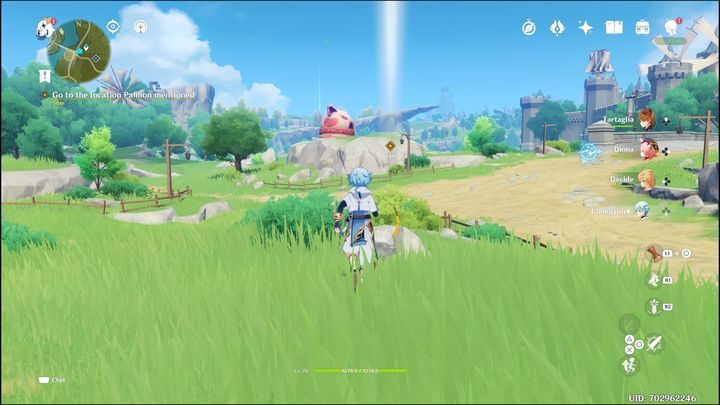 If you meet the requirements of the event, go to Mondstadt, more specifically to Katheryne. Talk to her, then go to the new marker. At the top of the city, you will find Mona and Fischl. After a short conversation, head to the inn where Kazuha, Venti and Xinyan will be staying. At the very end, go to the sculpture resembling Guoba (see photo above). 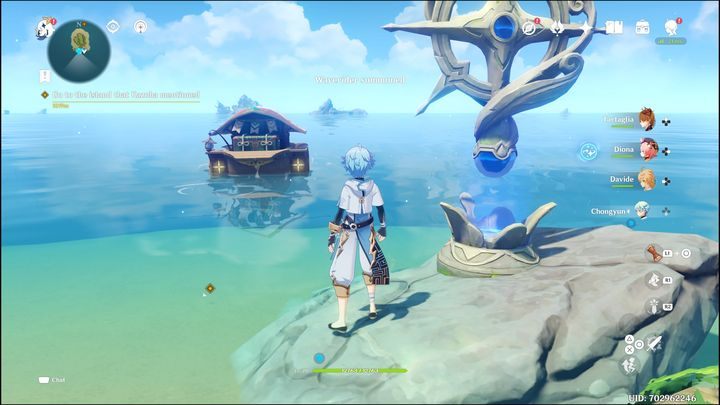 You will be transferred to an archipelago. Your next task will be reaching a specific point on the map. Use the boat that can be called near teleports. After you have gone to all points on the map and completed all conversations and cutscenes, you will unlock access to the first chapters. 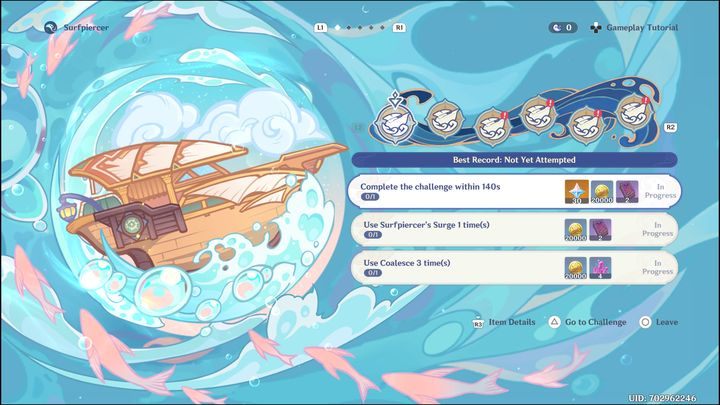 The first chapter of surfpiercer consists of performing individual challenges. The reward depends on how many tasks you can complete. Most often, you will need to fit in a time limit and destroy several obstacles, or use Piercer's Drive several times. 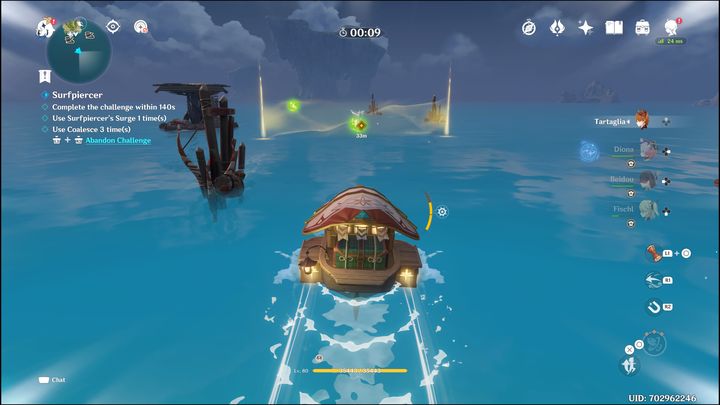 Your task in each of the challenges will be to swim through the golden gates, all the way to the finish line, while collecting green orbs, i.e. Surfpiercer's Drive. You do not have to touch the orbs to collect them – just use the Surfpiercer's Surge skill, which will pull all the balls in a small area towards you. 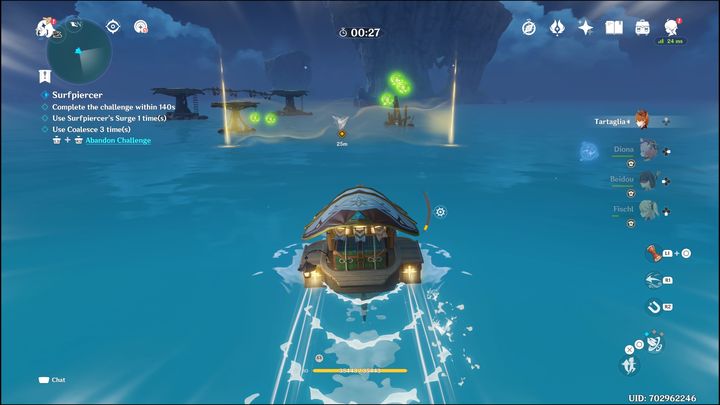 Once you get the right number of them, you will be able to take advantage of a powerful acceleration that can destroy many obstacles on your way. You can gather a maximum of 3 acceleration stacks.

Note that some of the obstacles are impossible destroy; usually these are the larger structures, which stand out from their smaller counterparts. 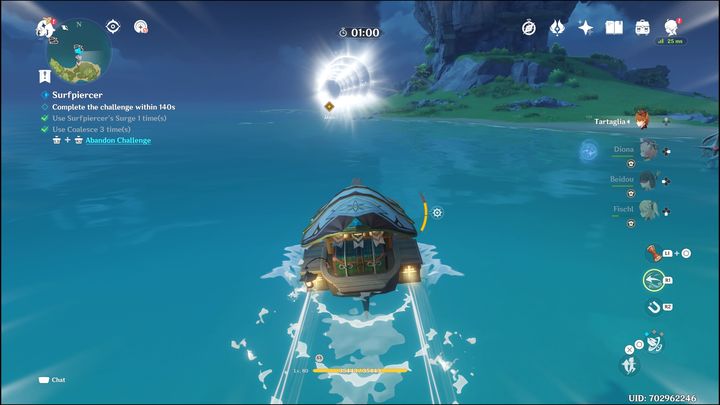 Obstacles will only be destroyed if you use the acceleration skill. These aren't the only obstacles; there will also be whirlpools. Sometimes, you will also have to get out of the boat to be able to transport faster to a given place using the air circles. 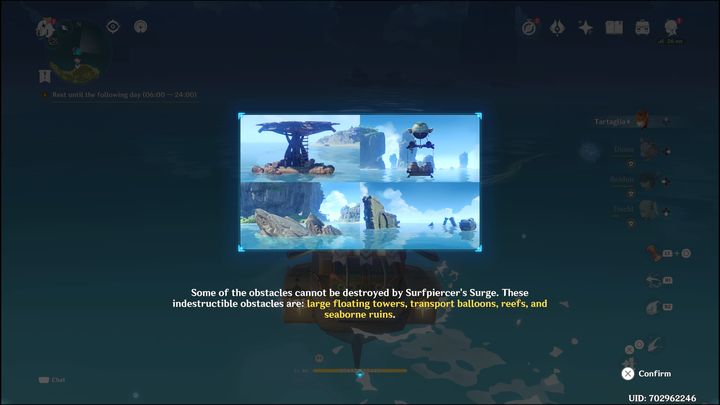 Upon entering each new challenge, in turn, you will be redirected to the map, specifically to the point where you need to go to start a new challenge and collect more prizes. 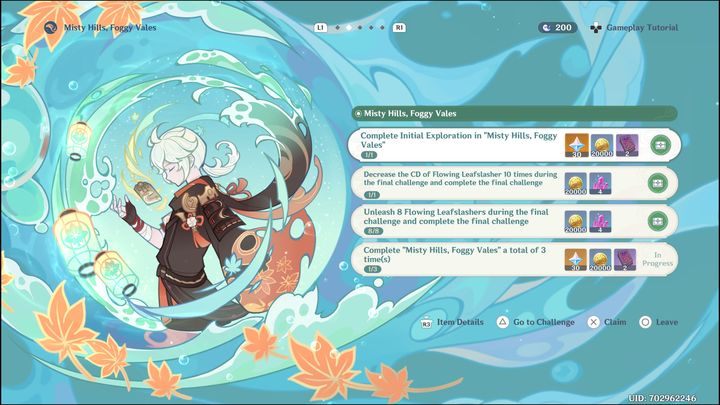 The next challenge begins in an unusual way, because after going to the new marker, you will be at the bonsai tree. After interacting with the plant, you will need to complete a task related to kazuha's history. 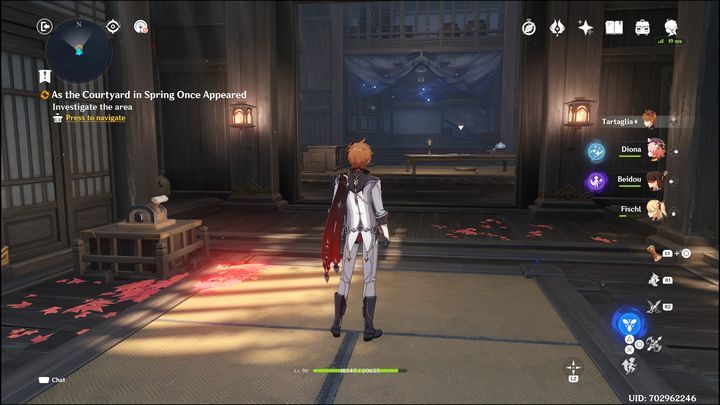 The tasks are a series of mini-mazes and puzzles. Very often you will have to use the lever to change the position of the room. 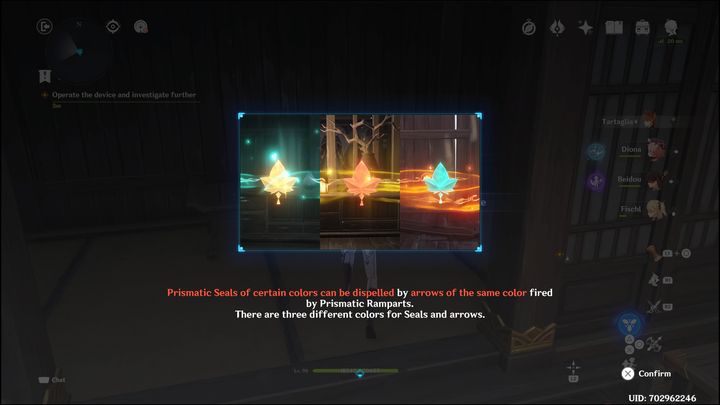 You will need to obtain a seal of certain colors. You can collect them when you shoot a projectile with a color that protects the seal (aura next to the leaf). This is not particularly difficult, because it's enough to set the appropriate trajectory of the monuments that indicate the path of the projectile. 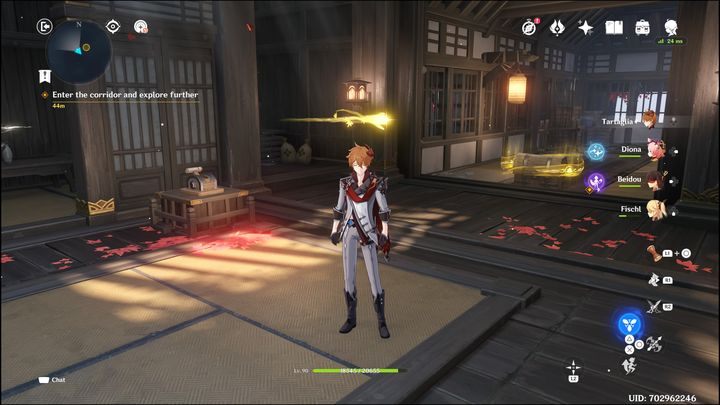 Later, it will also come to the omamori amulets, which, after the acquisition, you must place in the altars. 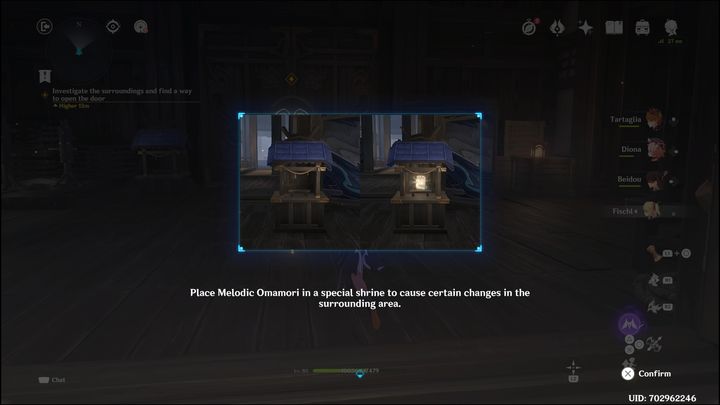 Once you have completed the tasks associated with this challenge, you will unlock access to the real tasks in this chapter. 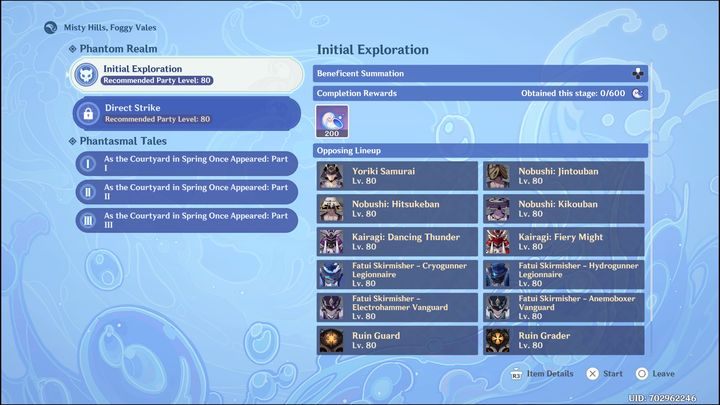 The challenges of this chapter consist mainly in defeating many opponents in a certain amount of time. The first task is about minor exploration and defeating several enemies on each section of the map. 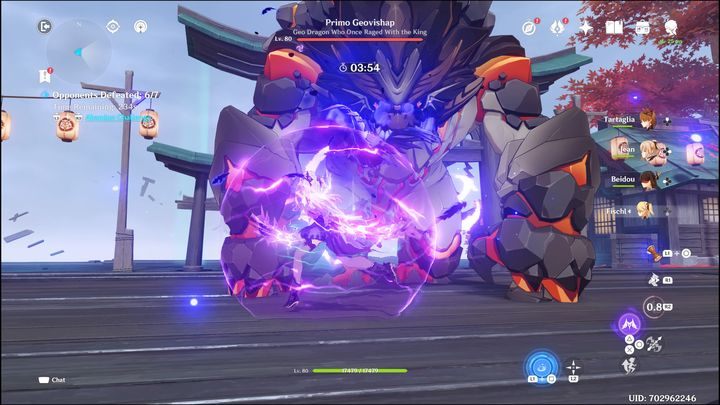 The second task is a direct clash with waves of opponents and then the final opponent. 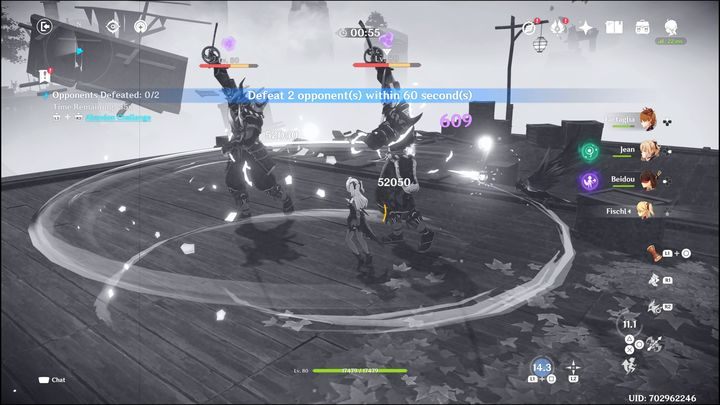 The fight should not be too hard, as you will have the opportunity to use a powerful area attack. The image will become black-and-white for a while, the cooldown of this skill is about 15 seconds. 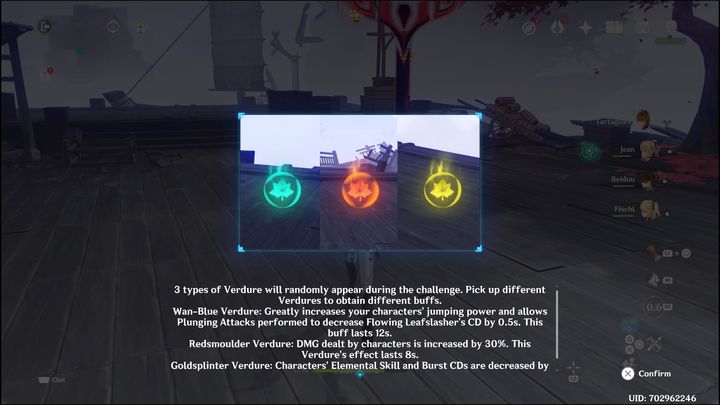 In addition, three types of seals will appear, which, when raised, will give a different effect. Blue will allow you to jump higher and use jump attacks to reduce the renewal time of the Flowing Leafslasher by half a second.

The Red Seal increases the damage dealt by your character by 30%, while yellow shortens the colldown of Elemental skill and Elemental burst by 20%.