On this page of the guide to Genshin Impact, you'll learn all about Childe, the character with the Hydro element. You will learn the general information about the character, what he is best suited for, how to build him well, and in which team he will have the greatest potential to perform his role. 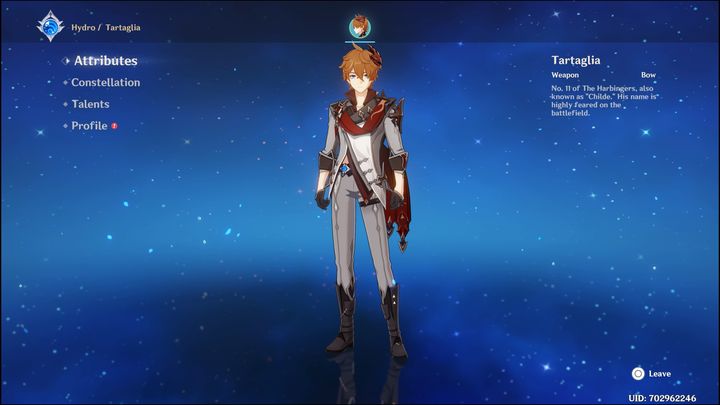 Childe is a five-star character with a Hydro element, fighting with a bow. Nevertheless, he will very often attack with his water daggers at high speed.

When building Childe, you should first focus on the ATK, Crit Rate, Crit DMG and Hydro DMG.

Childe deals a lot of damage in a short time with her Elemental Skill. These damage scale with both additional ATK and Hydro damage.

The first set worth equipping Childe with is 4x Heart of Depth. These artifacts will strengthen your Hydro DMG by extra 15%. What's more, using Elemental Skill will increase damage to normal and chargeable attacks by 30% for 15 seconds. Usually, you should not maintain Elemental Skill Childe for more than 15 seconds, as the skill's cooldown will increase significantly.

Both sets of artifacts are very similar, so when choosing one of these two, focus on the statistics and what they offer. Choose those that boost Crit DMG, Crit Rate, ATK and Hydro DMG, preferably the percentage values. 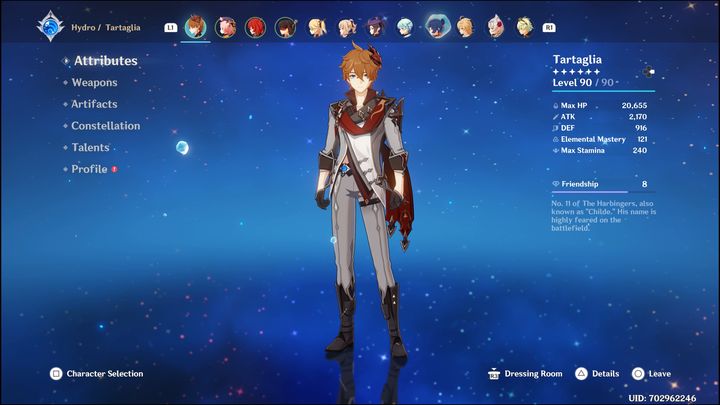 In the case of weapons, it is worth checking out the three suggested by us. In the first place, you should choose the bow called Polar Star. Unfortunately, it's a five-star weapon, so you have to be lucky to get it. This bow will increase your critical hit chance. What's more, your Elemental Skill and Elemental Burst will have increased damage by 12% on the first Refinement level. In addition, each attack (every type counts, such as charged or Elemental Burst attack) will give you a stack (maximum 4) for 12 seconds. For each of them, your ATK will be increased by 10%. 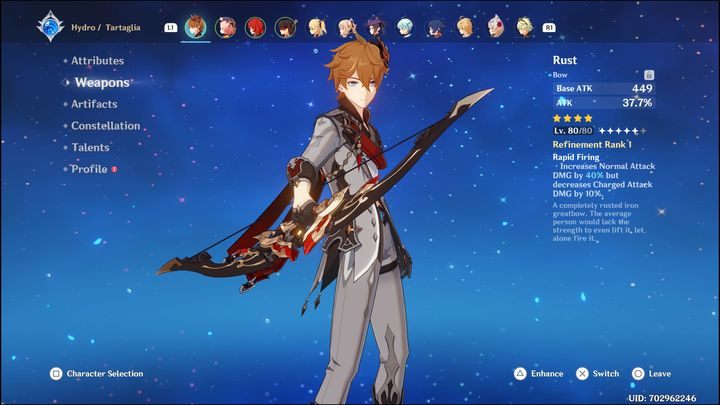 Second bow, Rust is a four-star weapon, so the chance of getting it is much bigger. This bow increases ATK with each level. The ability of this weapon increases damage dealt by normal attacks by up to 40% at the first Refinement level but at the expense of reduced damage when aiming from the bow. This debuff, however, isn't a real problem for this character, as he mainly deals damage with his water daggers. Moreover, the buff for normal attacks is also applied to daggers in Elemental Skill. A budget, albeit great option for F2P players.

Talents are abilities used by every character in the game. In case of Childe, you should develop both Elemental Skill (Foul Legacy: Raging Tide) and Elemental Burst (Havoc: Obliteration) evenly, because they have a very large impact on the damage inflicted by this character.

Regarding Normal Attacks (Cutting Torrent), invest in them last.

Childe, as befits a five-star character, fulfills his role properly even on C0. You can safely invest in him, getting him only once. However, if you really want to roll Childe several times, it is worth to get him five times to reach level C4. As a result, when Tartaglia is in his Elemental Skill state, he will activate Riptide Slash (area attacks) every 4 seconds.