On this page of the guide to Genshin Impact, you will learn all about Traveler, a character with a Electro element - what he/she is best suited for, how to build him/her best, and in which team he/she will have the greatest potential to perform his/her role. 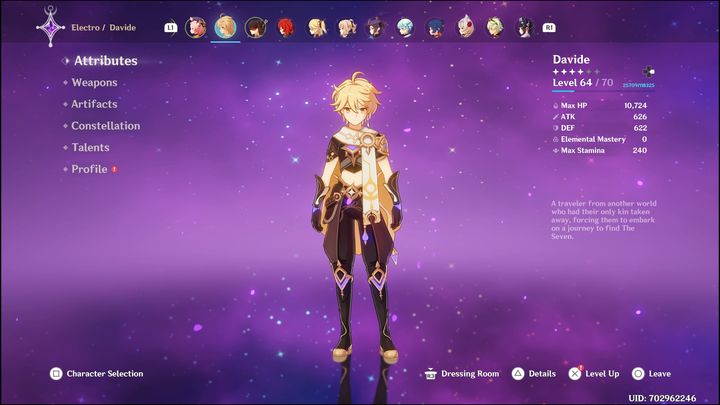 Traveler is a five-star and main character of the game with various elements. Here, we focus on the Traveler with the Electro element. This character is ideal for Energy Recharge, so they will be the perfect Support.

Traveler has poor damage scaling, so it is better to make that character a battery to charge the ER. You should focus on having from 150% to 170% ER.

Electro Traveler is a character that, when properly built, will provide you with a lot of Energy, so you will often be able to use Elemental Burst of other characters. Therefore, you should focus on these two artifact sets.

The first is 4x Emblem of Severed Fate which will give you an additional 20% Energy Recharge, and will also increase your Elemental Burst damage by up to 75% (depending on how much ER you have). Since Elemental Burst itself works so that a character attacking EB-influenced targets regenerates Energy, this is one of the better artifact sets for that character.

However, if you want to build the Traveler a little differently, you can use the 4x Noblesse Oblige artifact set. This set will not offer as much Energy Recharge, however, it will strengthen Elemental Burst DMG by 20%, and, moreover, after using EB, party members will receive a 20% buff to ATK for 12 seconds. This build is very useful if you prefer to play with other players rather than alone. However, it will also work great in solo mode. 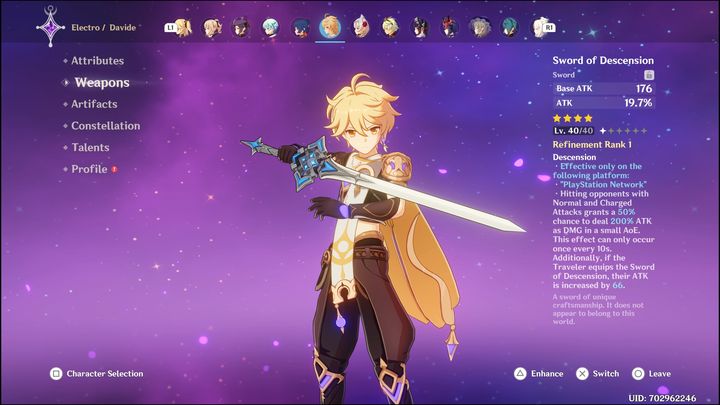 As for the weapons, there are a few that will be useful to the Traveler. The best suggestion would be to equip the Traveler with the Sacrificial Sword. Mainly due to its additional Energy Recharge, and the ability, which has a 40% chance of reducing the cooldown for Elemental Skill to zero. Moreover, it is a four-star weapon, so you will be able to get a higher Refinement level much faster. Upgrading the Refinement level alone will increase your chance of reducing cooldown by up to 80%. Using an Elemental Skill twice within a second, will give a lot of Energy to other characters.

The second weapon worth recommending is a five-star Skyward Blade. The substat gives a large amount of Energy Recharge. The skill itself increases the chance of CRIT by 4%. In addition, when you use Elemental Burst, you will increase your movement speed by 10%, attack speed by 10%, and Normal and Charged Attacks will deal 20% more damage. All these buffs will last 12 seconds.

The third weapon is Favonius Sword. Like the previous weapons, this one's substat also has Energy Recharge. What's more, the critical hits make you have a 60% chance of creating an Elemental Orb. Picking it up will restore 6 Energy - this effect can occur once every 12 seconds. A weapon perfect for a Support like the Traveler.

Talents are abilities that each character in the game uses. In the case of Barbara, you should develop her Talents in the right order:

As for upgrading the Traveler's talents, it is not worth upgrading his/her Normal Attack, as he/she will not use these attacks often.

In the case of the Traveler, you will get new Constellations over time as you perform the story missions, meaning you should be able to quickly get all the levels.

The most useful levels are C4 and C6, as they both increase Energy Recharge.