On this page of the guide to Genshin Impact, you will learn all about Razor, a character with a Electro element - what he is best suited for, how to build him best, and in which team he will have the greatest potential to perform his role. 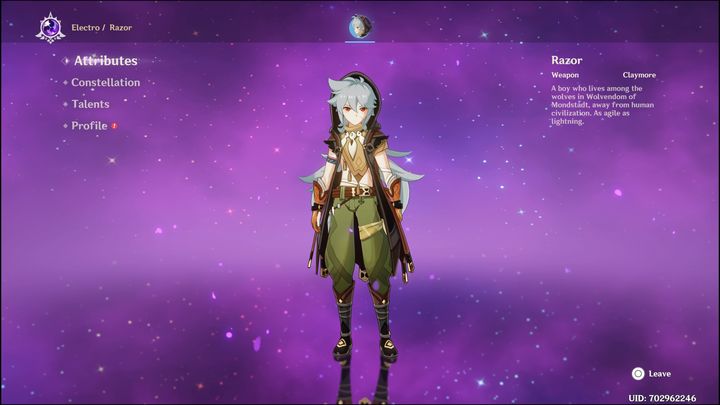 Razor is a four-star Electro character who fights with Claymore. She is focused on inflicting damage, so her main role will be a DPS. You should focus mainly on building up Physical DMG, ATK DMG, CRIT Rate and CRIT DMG.

As for 4x Gladiator's Finale set, your ATK will increase by 18%, and since Razor uses a Claymore, you will increase the ATK of normal attacks by 35%.

You can also use a combination of two sets, such as 2x Pale Flame and 2x Bloodstained Chivalry to get 50% Physical DMG Bonus. 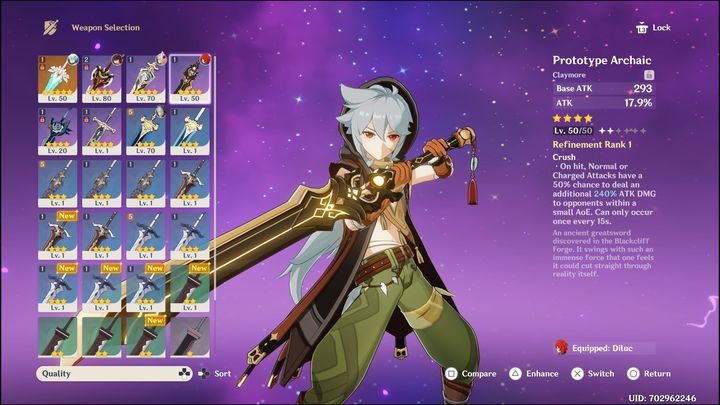 There are several weapons perfect for Razor. The best Claymore for Razor is Wolf's Gravestone. However, this is a five-star weapon, so there is a good chance that you will have problems with getting this weapon. The weapon itself increases ATK by 20%, and if you attack opponents that have less than 30% HP, you increase the base ATK of all characters in the party by 40%.

The second weapon worth getting for Razor is Serpent Spine. The weapon is a four-star. However, you can only get it when you purchase Battle Pass and get it to level 30. The weapon itself grants ATK and CRIT Rate, every 4 seconds you increase your DMG by 6%, but also increase the damage received by 3%. This effect is stacked up to 5 times. If the person using this weapon is injured, the stacks will disappear. Weapons like this are a great source of damage, as long as you're good at dodging.

The third weapon that will be very useful for Razor is another four-star that can be created in the forge. It is called Prototype Archaic. This weapon strengthens ATK%, and, when performing a Normal or Charged Attack, you have a 50% chance of doing an additional 240% ATK DMG in a small area. This effect is renewed every 15 seconds.

Talents are abilities that each character in the game uses. In the case of Razor, you should develop Talents in the right order:

Razor is a character that can be used with great success on C0, however, if you want to focus on him, it is worth getting Razor on C4.

C4 itself works as a very good boost for Razor, because when using Elemental Skill, you will reduce the DEF of enemies hit with it by 15%, which is very helpful for Physical Build. In addition, earlier levels offer a 10% increase to DMG after picking up an Elemental Orb, and a 10% chance of a critical hit when attacking targets below 30% HP.