On this page of the guide to Genshin Impact, you will learn all about Raiden Shogun, the character with the Electro element - what she is best suited for, how to build her best, and in which team she will have the greatest potential to perform her role. 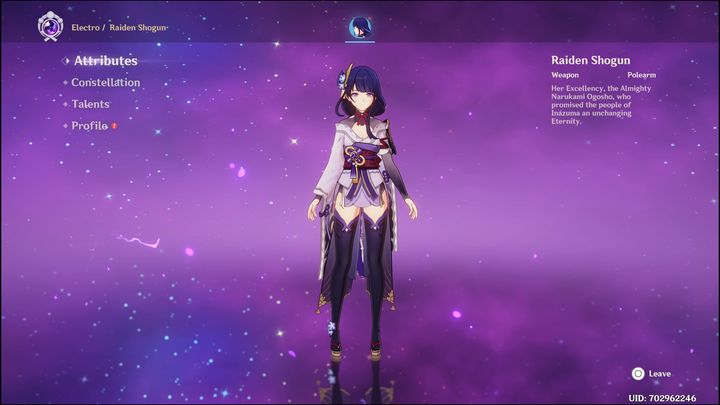 Raiden Shogun is a five-star Electro who fights with Polearms. This character is very versatile in terms of builds, because she can be a great DPS but also a Support.

This build should mainly focus on a high Energy Recharge, because his stat gives Raiden Shogun the greatest potential for DPS.

The best, and the only choice for this build, will be the 4x Emblem of Severed Fade set. It is important to achieve 200% ER, and thanks to this set of artifacts, this will be possible. 2x will give you 20% ER, and 4x will increase Elemental Burst DMG by 25%, up to a maximum of 75%, depending on how much maximum ER you have. 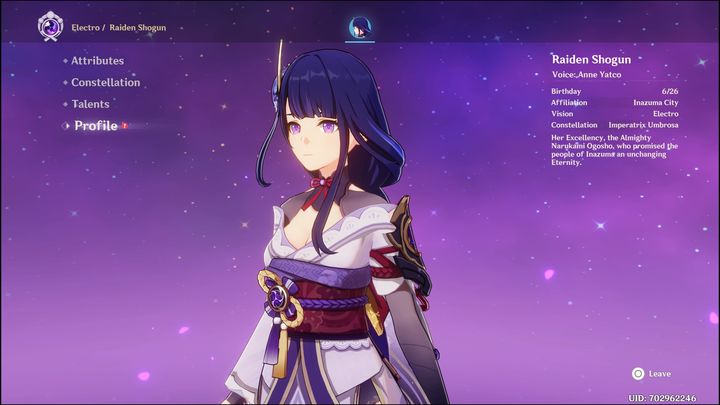 In combination with weapons that give more ER, such as Engulfing Lightning and The Catch, it will be much easier to get the maximum damage increased. Engulfing Lightning is the best weapon for this build, because it buffs ATK% depending on how much ER you have. Moreover, after using Elemental Burst, which you will have very quickly due to the large amount of ER, you will receive additional ER for 12 seconds. In combination with the Emblem of Severed Fade, you will kill enemies very fast.

In case you want to have another DPS in the party, but also include Raiden Shogun, you should think about building this character as an Electro Support.

As in the DPS build, among the best weapons for Raiden Shogun you will still find Engulfing Lightning and The Catch, mainly because of how much Energy Recharge they give when you upgrade them.

As for artifacts, Support would make a good use of 4x Tenacity of the Millelith. 2x will increase your health by 20%. When you equip 4x and use Elemental Skill that hits opponents, it will boost ATK and shield strength by 20% and 30% of all nearby allies for 3 seconds, respectively. Since Raiden Shogun will often use Elemental Skill, all she has to do is enter the battlefield, use Elemental Skill, and then switch with a DPS or other character who will receive increased damage and a much better shield.

Talents are abilities that each character in the game uses. In the case of Raiden Shogun, you should focus on upgrading your skills in the right order:

When building Raiden as a Support, there is no need to upgrade her normal attack, as she will mainly use Elemental Burst and Elemental Skill.

As a five-star character, Raiden Shogun will be useful without any C level. If you only have her at C0 level, she will still be a great choice.

However, if you're lucky enough to roll this character several times, it's definitely worth upgrading your Raiden Shogun to C2, mainly because C2 will cause Elemental Burst to ignore 60% of your opponents' DEF.