On this page of the guide to Genshin Impact, you will learn all about Lisa, the character with the Electro element - what she is best suited for, how to build her best, and in which team she will have the greatest potential to perform her role. 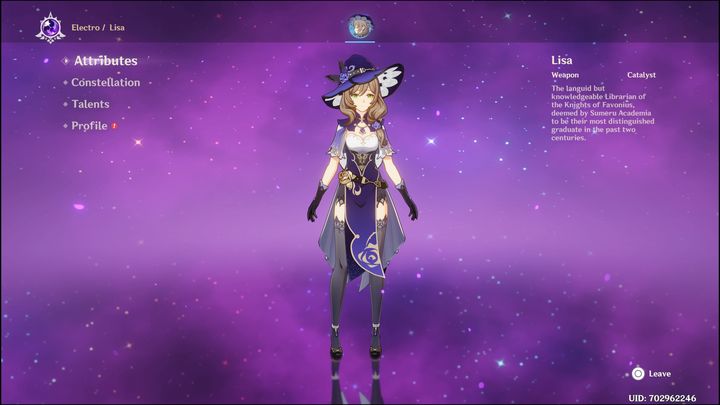 Lisa is a four-star character you can get for free after completing the tutorial. She fights with a Catalyst. This character can deal a lot of damage, but not fast enough to become the Main DPS in your party. Therefore, she will ideal for a Sub DPS.

ATK%, CRIT DMG and Electro DMG will be important for her. In addition, it would be good to have someone in the party who can give her a shield, so she won't have her posture broken when she uses the charged Elemental Skill.

Lisa can deal a lot of damage but only when she charges 3 stacks on her Elemental Skill. To do this, you need to switch your characters often, and it would be best to have a shield that will protect Lisa when she uses the charged Elemental Skill, which takes some time.

As for the artifacts, you should equip Lisa with those that can increase her Electro damage. Therefore, you should try to get the 4x Thundering Fury set. Two parts will strengthen Electro DMG by 15% whereas four parts will increase damage from Electro-Charged, Superconduct and Overloaded by 40%. What's more, activating this effect will shorten Elemental Skill's cooldown by one second.

However, if your party is not necessarily focused on creating these reactions, it is worth using a combination of 2x Thundering Fury and 2x Gladiator's Finale artifacts. This way, you will strengthen not only Electro DMG by 15%, but also ATK by 18%. 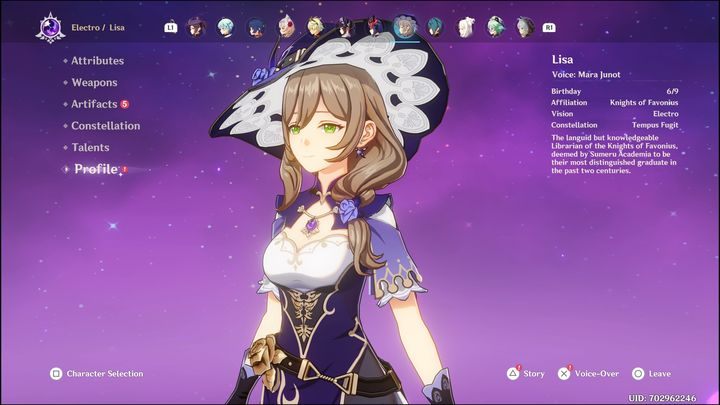 In the case of weapons, the best choice will be a five-star one, Skyward Atlas, especially if you can easily perform attacks that cause reactions such as Electro-Charged, Superconduct or Overloaded. The weapon strengthens ATK and ATK% as well as Elemental DMG by 12%. Normal attacks have a 50% chance of creating The Favor of the Clouds. This boost will search for enemies to inflict 160% ATK DMG on them for 15 seconds.

Talents are abilities that each character in the game uses. In the case of Lisa, you should focus on improving skills in the right order:

You don't have to improve her Normal Attack, as she will mainly deal damage with her Elemental Skill and Elemental Burst.