On this page of the guide to Genshin Impact, you will learn all about Keqing, the character with the Electro element - what she is best suited for, how to build her best, and in which team she will have the greatest potential to perform her role. 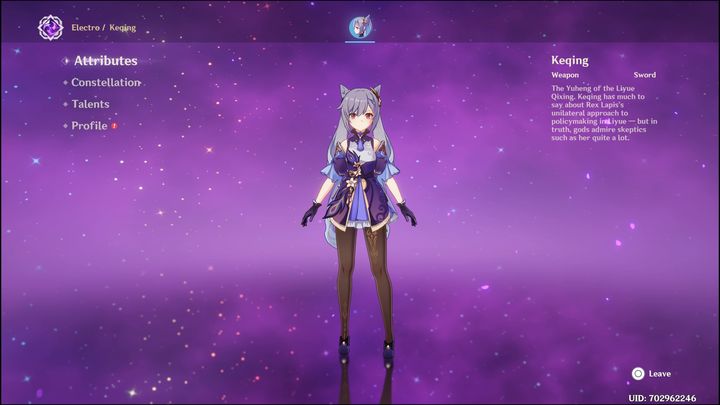 Keqing is a five-star Electro character who fights with a sword. She is focused on inflicting damage, so her main role will be a DPS. Although the character is focused on dealing damage, you can have two different builds for her, either Electro DPS or Physical DPS, focusing on your Normal and Charged Attacks.

In both cases, ATK, CRIT Rate and CRIT DMG will be very important statistics. Depending on the build, Electro DMG Bonus or Physical DMG Bonus will also be important.

Keqing has a very powerful Elemental Burst that deals high Electro damage to many opponents. In addition, when she uses Elemental Skill, she deals Electro DMG for a few seconds, so it's worth strengthening Electro DMG to deal as much damage as possible in combination with her abilities.

As a DPS, Keqing needs a lot of ATK. You can get this statistic in many ways, one of which is artifacts. 2x Gladiator's Finale and 2x Shimenawa's Reminiscence set will guarantee you additional 2x 18% ATK. However, if you do not have an Electro DMG Bonus from one of the artifacts, it is worth replacing one of these sets with 2x Thundering Fury to get 15% Electro DMG Bonus.

As for weapons, most of them will fit Keqing. You should mainly look for weapons with substats that grant CRIT Rate or CRIT DMG. One such weapon will be a five-star Primordial Jade Cutter. This weapon offers a very large base ATK and CRIT Rate (about 44% at the maximum level). What's more, it increases HP by 20%, plus you get bonus 1.2% DMG ATK, which scales with the maximum HP. As you can see, the weapon thus strengthens not only the potential to inflict damage, but also survivability, which is just as important. 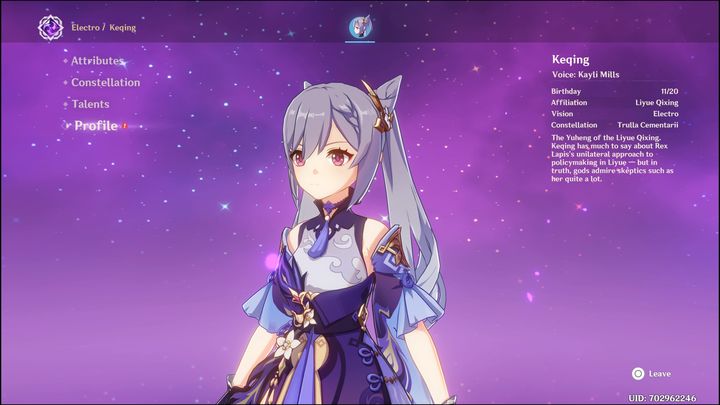 The second, and easier to obtain, weapon for Keqing, will be The Black Sword. The weapon is four-star and it also offers high ATK and CRIT Rate. The weapon's skill increases DMG from Normal and Charged Attacks by 20%. It also regenerates HP by 60% of ATK when you deal a critical hit. This effect occurs once every 5 seconds. Since you will want to have Keqing have high CRIT Rate, this effect should appear very often.

The last weapon is Lion's Roar. It's a four-star weapon. Although it's substat doesn't grant CRIT Rate or CRIT DMG, it does increase the ATK%. The weapon's skill fits perfectly with Electro DPS Build, because opponents hit with Electro or Pyro will receive 20% more damage.

Keqing can also be built for physical damage, but this requires changing your play style, namely the frequent use of Charged Attacks. You should also focus on inflicting damage to one target.

However, if you do not find this set useful, you can also combine 2x Pale Flame and 2x Bloodstained Chivalry to get a total of 50% additional physical damage.

In this build, you should focus on two weapons that enhance physical damage. The first of these is the five-star weapon, Aquila Favonia. In addition to ATK and physical damage, the weapon's skill increases ATK by another 20%. What's more, once you take damage, your attack will deal 200% damage to nearby enemies once every 15 seconds, and you will regenerate HP equal to 100% of the damage dealt.

The second weapon is ideal for free-to-play players, as it is a four-star that can be obtained at the blacksmith. When you gather the right materials, you can quickly craft Prototype Rancour. This weapon also strengthens ATK and physical damage. Moreover, when you hit the enemy, with Normal or Charged Attack, it will increase your base ATK and DEF by 4% for 6 seconds, gaining a stack (max 4).

Talents are abilities that each character in the game uses. In the case of Keqing, depending on your preferred style of play, you should develop Talents in the the following order:

Keqing doesn't really need any Constellations to be playable, her C0 is very good. However, if you are thinking about increasing the potential of this character, it is worth having her on C2 (if you are thinking about making an Electro DMG build). On C1 and C2, you will deal additional Electro damage after using Elemental Skill and have a 50% chance of producing Elemental Particle if you attack an enemy that has been inflicted with Electro.