On this page of the guide to Genshin Impact, you will learn all about Beidou, the character with the Electro element - what she is best suited for, how to build her best, and in which team she will have the greatest potential to perform her role. 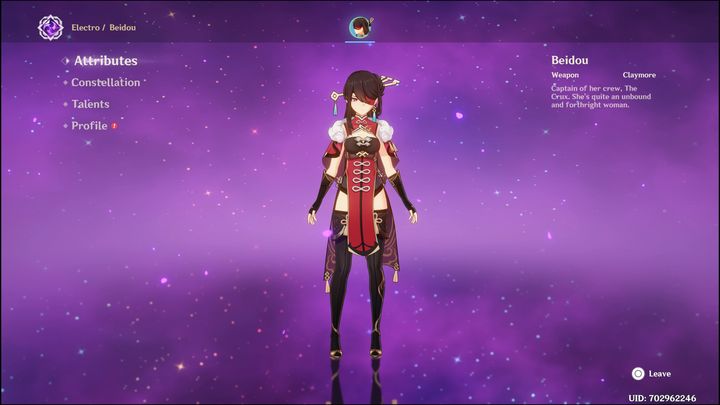 Beidou is a four-star Electro who fights with a Claymore. Beidou's fighting style is unique, as it is based on perfectly countering opponents' attacks to deal huge damage with her Elemental Skill, that is Tidecaller. Beidou is a great Sub DPS. When you expect a powerful attack from the enemy, you should quickly change to Beidou, then use her Elemental Skill to deal damage and then change the character.

If you want to improve Beidou, you should give her artifacts that will strengthen her ATK%, Electro DMG, CRIT DMG and CRIT Rate.

Beidou is perfect for Sub or Main DPS. All thanks to her Elemental Skill, which deals very high damage, especially if you activate it at the moment when you are attacked by the enemy. This will also boost your Normal Attack and Charged Attack, DMG and Attack SPD by 15%. In addition, it is worth having about 140% Energy Recharge for Beidou.

Beidou has several options when it comes to using artifacts. The first option is to build Beidou around 4x Emblem of Severed Fate. Beidou needs Energy Recharge for frequent use of Elemental Burst, which gives you a lot of opportunities to create reactions such as Overloaded or Electro-Charged. Furthermore, with 4x, you will deal increased Elemental Burst damage, depending on your Energy Recharge.

The third option is to use 4x Gladiator's Finale. This set will increase your ATK by 18%, and with 4 pieces, you will deal 35% more damage with basic attacks. This set of artifacts will be very good if you want to make Beidou as your Main DPS. By making a perfect counter with Elemental Skill, you will also increase your ATK and SPD ATK by 15%, which means stronger and faster normal attacks. 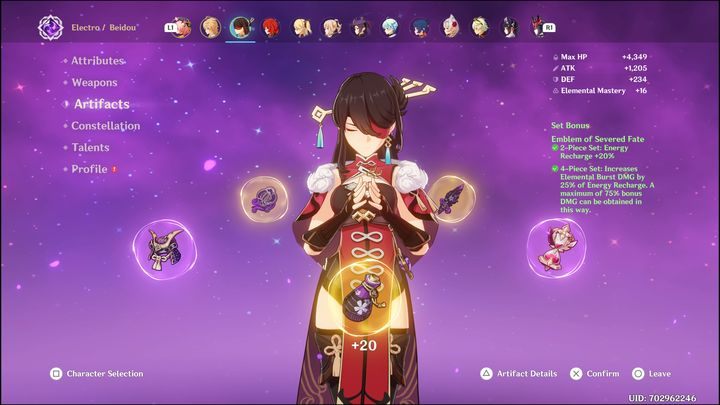 As for the weapons, Beidou has a wide range of options, as a lot of Claymores will work with her. The best and rarest weapon will be Wolf's Gravestone. Not only does it strengthen ATK by 20%, it also increases the base ATK by 40% for each party member for 12 seconds when you attack a target with less than 30% of HP.

You can select Serpent Spine as a reward in the Battle Pass when you reach level 30 (provided you got the paid version of BP). Besides the basic ATK and CRIT Rate, the weapon also has a skill where Beidou deals 6% more damage while taking 3% more damage every 4 seconds she is on the battlefield (max 5 stacks). If the character takes damage, the stacks will disappear, however, Beidou has a shield with Elemental Skill and Elemental Burst (if you have her on C1), so it is difficult to lose stacks with this character.

Akuoumaru is a great option for a build focusing on Energy Recharge, because in addition to the standard increase in ATK and ATK%, this weapon can deal a maximum of 40% extra Elemental Burst damage, depending on the combined maximum Energy level of all characters in the party. This weapon is also a much easier to obtain compared to Wolf's Gravestone because it is a four-star weapon.

Another great weapon (although slightly weaker than the previously mentioned), is Sacrificial Great. This weapon has a 40% chance that after using Elemental Skill, the Cooldown of this skill will be shortened meaning you will be able to use it again faster. The greater the Refinement, the greater the chance of activating the effect. This means that Beidou will have a great chance to use the Elemental Skill twice in a row, which deals very high damage, and in addition, you will get a lot more Energy. It is a four-star weapon and is available in all Wish Banners.

Talents are abilities that each character in the game uses. In the case of Beidou, you should develop Talents in the proper order:

Beidou is able to do quite a bit of damage already at C0 level. However, if you are thinking of investing in her, you should get her five times to unlock C4.

Beidou on C1 gains an extra shield that scales with her HP. On C2, the electricity resulting from attacks after using Elemental Burst jumps to other targets. On C4, normal attacks inflict extra 20% of Electro DMG (if you are thinking of Physical DPS build, do not upgrade Beidou to C4, as it will destroy your build completely).