On this page of the guide to Genshin Impact, you'll learn all about Yoimiya, the character with the Pyro element - what she is best suited for, how to build her best, and in which team she will have the greatest potential to perform her role. 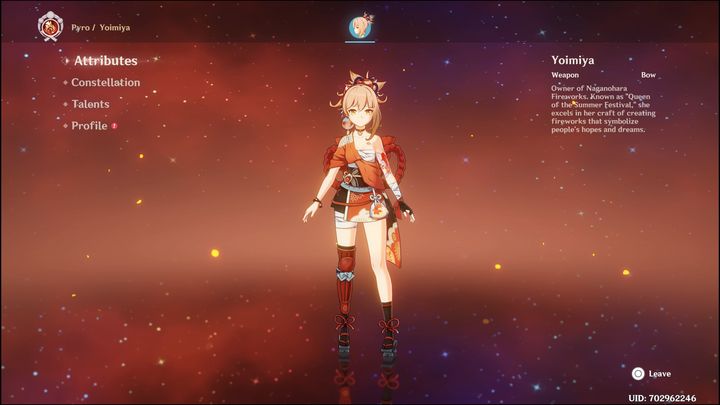 Yoimiya is a five-star Pyro who fights with a bow. Yoimiya is the perfect candidate for being the main DPS in your party if you want to focus on her and improve.

As a DPS, you should focus on artifacts that increase her ATK%, Pyro DMG, and CRIT DMG.

Yoimiya is an ideal candidate for a DPS, mainly due to her strong basic attacks, which gain strength by buffing them with Elemental Skill that add Pyro DMG. Because of this, she can inflict very large damage combined with many reactions.

Yoimiya is a character that can use a lot of different sets of artifacts, because she scales with them all very well. If you want to strengthen Pyro DMG, mainly reactions such as Overload, Melt or Vaporize, it is worth thinking about 4x Crimson Witch of Flames. With this set, you will increase Pyro DMG and DMG resulting from reactions. Yoimiya with a well-composed team can get a lot out of it.

Another suggestion that will also greatly enhance your Yoimiya will be 4x Lavawalker set. While a 2x set is not exactly what you want for this character, as it increases Pyro RES by 40% (which is a good boost for a tank), a 4x set increases damage to targets who are Burning (she can do that very easily) by 35%.

You can also combine 2x Crimson Witch of Flames with 2x Gladiator's Finale to increase Pyro damage by 15% and ATK by 18% which is also an interesting and good solution. 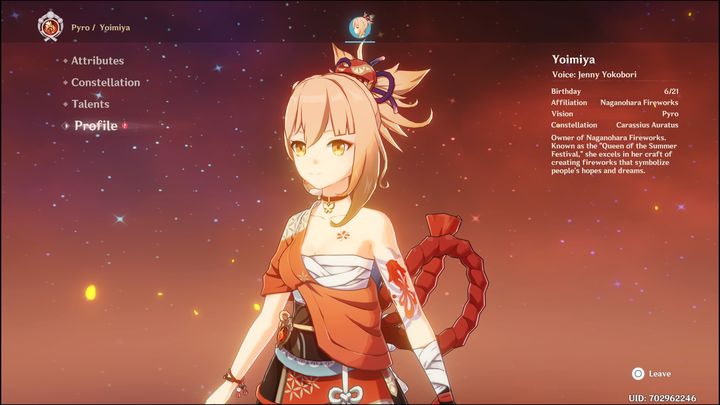 In the case of weapons that are worth equipping Yoimiya with, then the first choice should be a five-star bow, Thundering Pulse. Other than basic ATK and CRIT DMG, weapon skill increases ATK by 20%. What's more, you gain Thunder Emblem levels with this weapon. You gain a level when you meet the right condition: deal damage with a normal attack, use Elemental Skill and when your Energy is less than 100%. Each stack guarantees you 12% more damage from normal attacks. In truth, this is the best weapon choice for this character, since you focus on dealing normal, fast attacks.

Another option, mainly for F2P players, will be to equip Rust. Other than basic ATK and ATK%, this weapon boosts your basic attacks by 40%, reducing your Charged Attack damage by 10%. Yoimiya should not use Charged Attacks, so you will not feel the debuff at all. However, the increased damage of normal attacks by 40% is a lot. As for a four-star weapon, it will be the perfect choice if you do not have Thundering Pulse.

Talents are abilities that each character in the game uses. You should invest equally in all of Yoimiya's skills.

As a five-star character, Yoimiya is already really strong at C0 level, so you don't have to focus on strengthening her constellation, given that it takes a lot of luck to roll her again.

However, each of her constellations strengthens her even more, so it is worth improving her C LVL if you can.

You should be aware of her C6, the final level, if you use a lot of the Vaporize reaction element, because after unlocking C6, it will become much weaker. However, it will strengthen Yoimiya's overall DMG.