On this page of the guide to Genshin Impact, you will learn all about Yanfei, the character with the Pyro element - what she is best suited for, how to build her best, and in which team she will have the greatest potential to perform her role. 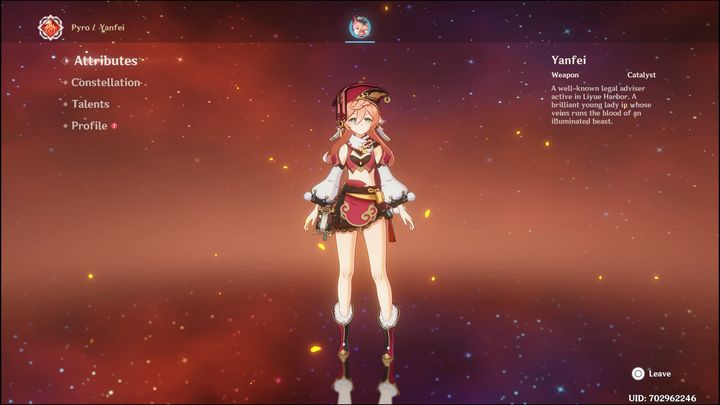 Yanfei is a four-star Pyro who fights with a Catalyst. Yanfei's style of play is to get the maximum number of Scarlet Seals stacks, then activate them with Charged Attack.

In the case of building Yanfei, you should focus on inflicting damage, so ATK%, Pyro DMG and CRIT DMG will be very important.

Although Yanfei is a four-star character, she can inflict very large damage, which makes her suitable for the main DPS. It is worth remembering that you need to collect 3 stacks of Scarlet Seals to activate them with Charged Attacks. If you hit opponents with the Elemental Skill, you will immediately get all the Stacks so keep this in mind.

The artifacts you should focus on when building Yanfei as a DPS are Crimson Witch of Flames or Wanderer's Troupe. Having 4 parts of CWoF will increase Pyro DMG by 15%, and reaction damage such as Overload and Burning by 40%, and Vaporize and Melt by 15%. In addition, by using Elemental Skill, you will boost Pyro DMG by 7.5%, stacking up to 3 times (10 seconds boost).

In the case of Wanderer's Troupe, 2 parts of this set will strengthen your Elemental Mastery by 80, so your reactions such as Overload, Melt or Vaporize will be strengthened and will deal more damage. What's more, if you have four parts and are using Catalyst, your Charged Attack will be boosted by 35%. Since Yanfei will often use Charged Attacks, this is a very good reinforcement.

There are several weapons that fit Yanfei perfectly. The first is Skyward Atlas, a five-star weapon. This weapon strengthens the base ATK and adds ATK%. Weapon skill boosts Elemental DMG by 12%. In addition, normal attacks have a chance to get the "Favor of the Clouds". Favor of the Clouds will search for enemies for 15 seconds and attack them, while inflicting 160% ATK (the effect activates once every 30 seconds). 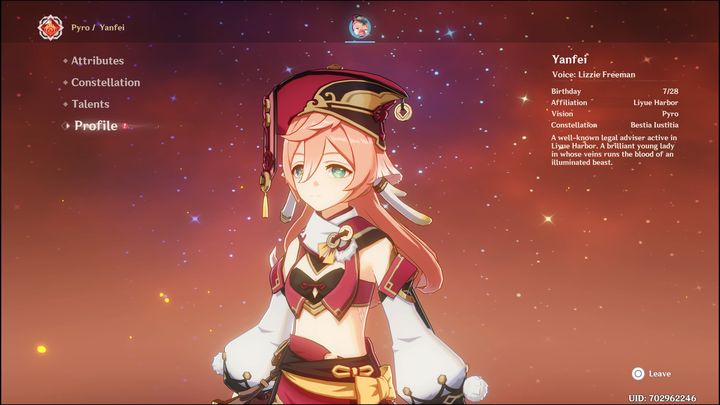 The Widsith, a much more accessible weapon, is a four-star Catalyst, which increases the base ATK and CRIT DMG. The weapon skill activates when Yanfei appears on the battlefield. For 10 seconds, she gets a random song, which has 3 specific effects. It increases ATK by 60%, Elemental DMG by 48% or increases Elemental Mastery by 240. Each of these effects greatly strengthens Yanfei, so this weapon will be a good choice if you do not have Skyward Atlas.

The third weapon is also very good, but you can get it only when you buy a Battle Pass and reach level 30. It is called Solar Pearl. In addition to the base ATK and CRIT Rate, normal attacks increase Elemental Skill and Elemental Burst DMG by 20% for 6 seconds. This will work similarly if you use Elemental Skill or Burst, then your normal attacks will deal 20% more damage.

Talents are abilities that each character in the game uses. In Yanfei's case, since she can become your main DPS, you should improve all her skills evenly.

Yanfei can be a very good character at the very beginning, when you roll her only once. However, if you are thinking about making a build for her, you should draw her at least twice to get C1. C1 strengthens her Charged Attack, which is a very important part of her gameplay. It reduces stamina consumption by 10% when you perform a Charged Attack, in addition, it is much harder to knock Yanfei off balance when using this attack.