On this page of the guide to Genshin Impact, you'll learn all about Xinyan, the character with the Pyro element - what she is best suited for, how to build her best, and in which team she will have the greatest potential to perform her role. 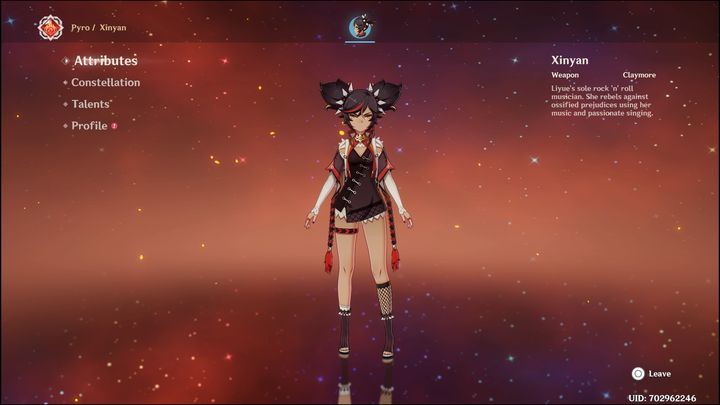 Xinyan is a four-star character who fights using Claymore. She is the ideal support for players whose party is focused on inflicting physical damage. Mainly because on C4, Xinyan lowers Physical RES by 15% for 12 seconds, and her passive talent "...Now That's Rock'N'Roll!" makes Elememtal Skill deal 15% of the increased Physical DMG.

Xinyan's job is to grant characters Shields to protect them from damage, and increase their physical damage (which is why Razor and Eula would be ideal candidates for a DPS).

Weapons for Xinyan should not focus on ATK, CRIT Rate or CRIT DMG converters, but mainly on Energy Recharge so you can use Elemental Skill and Burst more often. Therefore, one of the better weapons for Xinyan will be Skyward Pride. This is a five-star weapon that outside the ATK, also increases the much needed Energy Recharge. The weapon's ability increases each type of DMG by 8%. In addition, after using Elemental Burst, the weapon creates air attacks (activated during Normal and Charged Attacks), which inflict increased physical damage (maximum 8 air attacks). 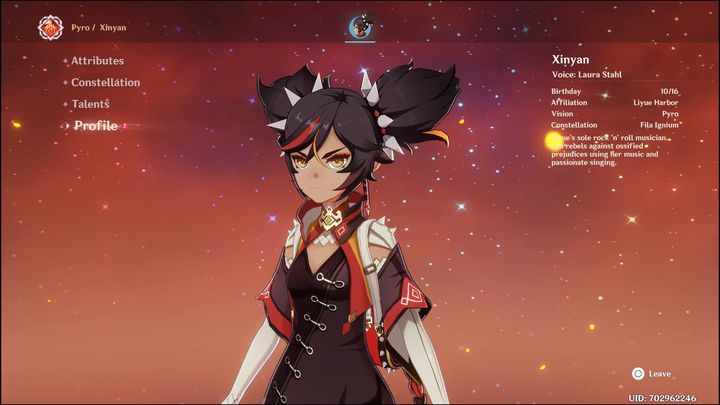 Sacrificial Greatsword is a four-star weapon that's easier to obtain. It also strengthens ATK and Energy Recharge. Moreover, the weapon's ability gives 40% chance that after dealing Elemental Skill damage, the skill's recovery time will be reduced to 0 and you'll be able to use this skill again.

The Unforged is another five-star weapon. However, instead of Energy Recharge, it offers an increased ATK%. However, the ability is very strong, as it increases the strength of the received shields by 20%, and attacking opponents increases ATK by 4% (max 5 stacks).

Talents are abilities that each character in the game uses. As for Xinyan, you should invest evenly in Elemental Skill and Burst, and ignore Normal Attacks.

Xinyan is not very strong without any of the constellations. She is a great support for characters focusing on Physical DMG, so you will need to have Xinyan on C4, which reduces Physical RES by 15% for 12 seconds. Therefore, if you want to focus on developing this character, think about it when you start to roll her frequently from Wishy.