On this page of the guide to Genshin Impact, you will learn all about Thoma, a character with a Pyro element - what he is best suited for, how to build him best, and in which team he will have the greatest potential to perform his role. 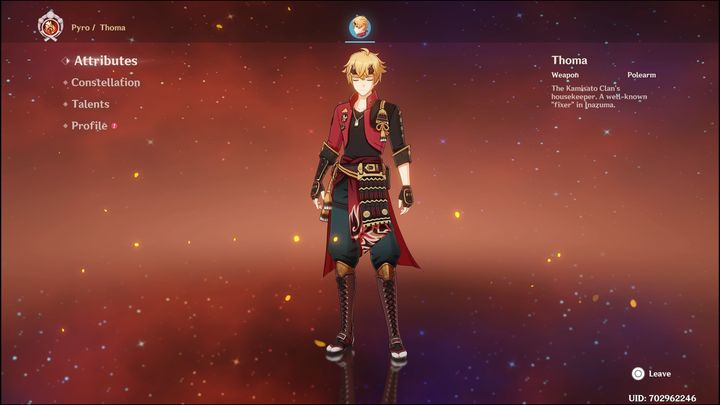 Thoma is a four-star character who fights using Polearms. Thoma is best known as a Support who assists others with his shields that scale with his HP, but he can also be a Sub DPS. Unfortunately, his scaling with DMG is not that high, so he cannot become a Main DPS.

You should focus on stats like HP and Energy Recharge if you want to build him as a Support, and in the case of Sub DPS, focus on ATK, Pyro DMG and CRIT DMG.

In the case of building Thoma as a Support, it is important to get him a large amount of Energy Recharge, so he will be able to create Shields for other characters. In addition, it is worth focusing on HP, since the Shield scales precisely with this statistic.

There is also a combination of Emblem of Severed Fate and Tenacity of the Millelith sets. The two parts of EoSF give 20% Energy Recharge, and the two TotM will give you 20% HP. This is one of the better set combinations you can make for Thoma, because, as a Support, you need a lot of Energy Recharge to use the Shields and HP to make them much stronger. 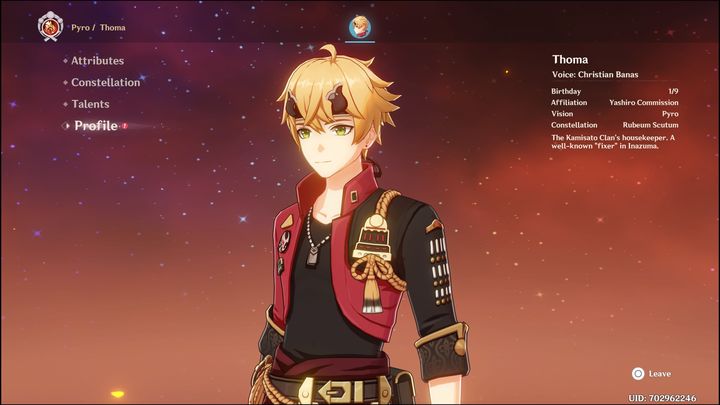 In the case of weapons for Thoma as Support, it is worth investing in Skyward Spine provided you have it. Besides the basic ATK, it also gives a large amount of additional Energy Recharge. Moreover, it increases CRIT Rate by 8%, Normal ATK SPD by 12%, and in addition, attacks have a 50% chance to deal additional 40% DMG AoE. However, this is not so important, since Thoma will not be in your team as a Support to perform too much attacks. This weapon is ideal if you have a lot of Energy Recharge.

A slightly weaker version of the weapon, although offering an additional amount of Energy Recharge, will be Favonius Lance. This weapon has a much better ability, because during a critical attack, you have a 60% chance of creating an Elemental Orb, which will recover 6 Energy to a character that will pick up this orb.

Thoma is not very suitable as a main DPS since he has very small DMG converter. However, a properly build Thoma can be ideal as a Sub DPS in combination with a Support.

Talents are abilities that each character in the game uses. When it comes to Thoma, Talents should be improving in the right order:

In the case of the Support build, you should not waste resources on Swiftshatter Spear, as you will not use Normal or Charged ATK too much.

Thoma, as one of the few four-star characters, is very helpful with C0. His constellations mainly extend the effects, strengthen the shields, or lower the requirements needed to use certain skills.

If you want to invest in Thoma, it is worth having him on C4, due to the fact that his Elemental Burst will require 15 less Energy to activate, which is very helpful. In addition, earlier constellations shorten CD of skills and lengthen their action, which is also very useful.