On this page of the guide to Genshin Impact, you will learn all about Diluc, the character with the Pyro element - what he is best suited for, how to build him best, and in which team he will have the greatest potential to perform his role. 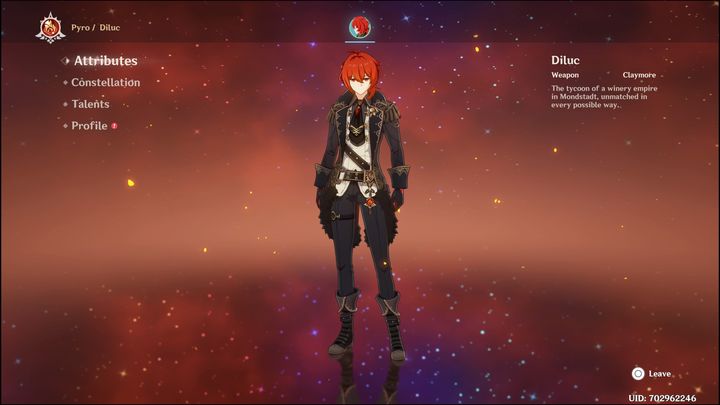 Diluc is a five-star character who fights with a Claymore. His skills are very strongly linked to Pyro. This character is suitable mainly for a DPS, however, he performs very well in this role.

When it comes to Diluc's abilities, they are best scaled with Pyro DMG and ATK DMG. Therefore, pay attention to these two statistics when choosing the right artifacts for her. If you're thinking about a physical damage build, it's not such a good idea, since Diluc deals Pyro DMG (up to 3 times) with his Elemental Skill, and after using Elemental Burst, your weapon will start dealing Pyro damage.

It is also worth noting that Diluc, thanks to his skill, can easily cancel his attacks and perform them much faster. Therefore, it is worth using this combination:

After performing it, most opponents will not be able to attack. Starting with Burst Skill, you boost Pyro DMG by 20%, however, playing as Diluc, you will mainly benefit from the Crimson Witch of Flames set, which increases Pyro DMG by 15%, and then, after each use of Elemental Skill, Pyro DMG gets increased by 7.5% (to be exact, by 50% of the base value of 2 parts of the Crimson Witch of Flames set), stacking up to 3 times. Therefore, it is much more profitable to end a combo with Elemental Burst than to start with it.

When making a build for Diluc, you should focus mainly on the statistics increasing ATK % and Pyro DMG. When it comes to substats, it is important to have high CRIT DMG (preferably 150%-200%) and CRIT Rate (preferably 100%).

Crimson Witch of Flames is the most optimal, and, at the same time, the best set of artifacts that you can give to Diluc. 2 parts of this set will give you 15% bonus Pyro DMG which is very useful for this character. 4 extra parts increase Overload and Burning damage by 40%, and Vaporize and Melt damage by 15%. In addition, they increase the base value of Pyro DMG by half after using Elemental Skill. Since Diluc can use Elemental Skill 3 times, and the ability of this artifact is stacked up to 3 times and lasts 10 seconds, having a set of these artifacts is mandatory.

As for weapons, the best ones are those that increase ATK% and CRIT Rate%. One of them is Wolf's Gravestone. This is a five-star weapon, so it will be difficult to obtain. But if you managed to get it, it is worth investing in it, because Diluc will make a very good use of this weapon. In addition to the increase in ATK% from the base statistics, the weapon's skill increases ATK by 20%. In addition, if you attack an opponent that has less than 30% HP, you increase each party member's DMG by 40% for 12 seconds (activates once every 30 seconds). 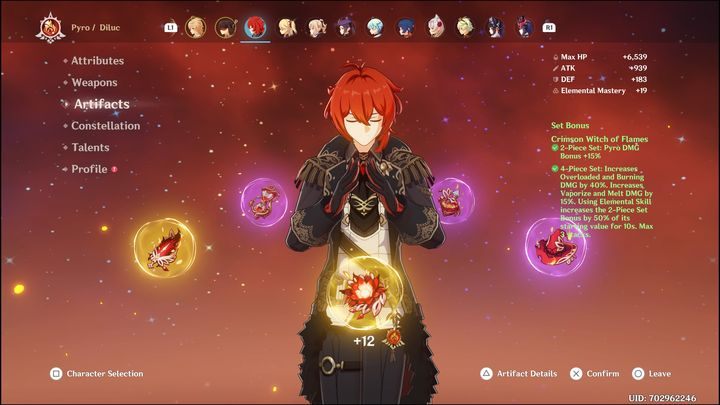 Another weapon that works just as well for Diluc is Serpent Spine. To get this weapon, you must purchase a Battle Pass and reach level 30. This is a reward that allows you to choose one out of five weapons (one type each). This weapon increases your CRIT Rate%. In addition, you will get one stack every 4 seconds (maximum 5). Each stack boosts your DMG by 6% (at the highest Refinement level it will be 10%), but also increases your damage by 3% (at the highest Refinement level it will be 2%). With 1 Refinement level, you can deal 30% more damage and receive 15% of the damage. If you know how to avoid enemy attacks, this weapon will be perfect for Diluc.

The last weapon that works as well as the previous ones is Prototype Archaic. It is easy to obtain, since you can forge it in the forge with Northlander Claymore Billet and the appropriate quantity of Crystal Chunk. In addition to the base ATK, the weapon also increases the ATK%. In addition, the weapon's skill causes a normal and charged attack to have a 50% chance of dealing additional 240% ATK DMG to enemies close to each other, once every 15 seconds. Thanks to this, once every 15 seconds you will deal very heavy damage to a group of opponents, provided they are standing very close to each other.

Talents are abilities that each character in the game uses. As for Diluc, all his Talents are mandatory, so it is worth investing in them evenly.

Diluc, like most five-star characters, is very useful without any constellation. However, each of the constellations strengthens him significantly. C1 is very useful, because Diluc will deal 15% more damage to any character that has more than 50% HP.

For those who are not very good at avoiding attacks, C2 will be a great solution, because when you receive damage, you will get increased ATK DMG by 10% and ATK Speed by 5%, up to a maximum of 3 stacks.

The rest of constellations increases the maximum skill level and DMG after using Elemental Skill.