On this page of the guide to Genshin Impact, you will learn all about Bennet, the character with the Pyro element - what he is best suited for, how to build him best, and in which team he will have the greatest potential to perform his role. 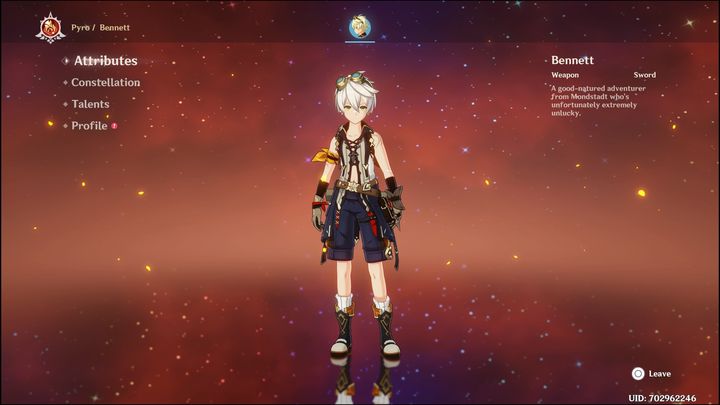 Bennet is a four-star character that you can get from Wishy. He fights with a sword. Bennet is a brilliant character who is ideally suited as a Support due to his Elemental Burst, which not only increases the damage, but also heals allies.

However, it is worth noting that when having a basic Bennet (that is, without Constellation), this skill will work so that if the hero in the circle has less than 70% HP, they will begin to regenerate health, and if they have more than 70%, then the ATK of the heroes increases depending on the maximum level of Bennet's health. Therefore, it is worth looking for artifacts with HP% and ATK% main and sub stats.

Bennet is a very good character, especially on C1 - he is definitely worth investing in him all the resources.

Although Bennet is worth building only as a Support, he works very well in this role. Even though he is only suitable for supporting other characters, you can choose from several builds. In this case, this is the most versatile build that will work at any stage of the game:

Noblesse Oblige will work perfectly on Bennett as Support due to Elemental Burst. Bennet needs little energy (60 Energy) to be able to use Elemental Burst, and with this set of artifacts, not only will you increase Elemental Burst's DMG by 20%, you'll also increase the ATK of all party members by 20% for 12 seconds (no stacking capability). In combination with his Elemental Burst, it will give you very big benefits. 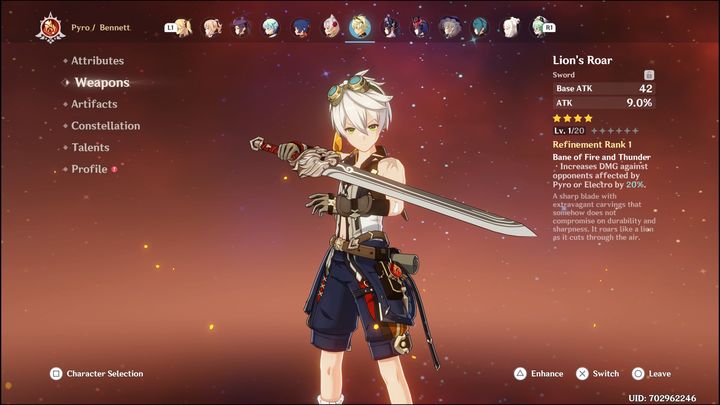 As for weapons, each of them is a great choice for Bennet. Skyward Blade is the most difficult to get, as it is a 5-star weapon, however this sword increases the chance of a critical hit by 4-8% (depending on Refine Level). But more importantly, after using Elemental Burst, you increase Movement Speed and ATK Speed by 10% and, on top of that, Normal and Charged Attack deal additional damage, depending on the user's ATK (20-40% ATK).

Other swords like Iron Sting and Festering Desire are easier to obtain and as good as Skyward Blade. Iron Sting increases base ATK%, and by inflicting Elemental DMG, increases DMG by 10% of all attacks, when you have one charge. You can get a maximum of two charges. This effect lasts for 6 seconds.

In the case of Festering Desire, by improving the weapon, you will also increase Energy Recharge, which is very helpful in the continuous use of Elemental Burst. In addition, this weapon increases Elemental Skill DMG by 16-32% and the chance of a critical hit by 6-12%.

If you think that the previous build is not for you, or does not meet your expectations, you can make Bennet focus on Energy Recharge to quickly charge your Elemental Burst and others.

As in the previous build, the weapons listed above will work perfectly, although the most suitable will be Festering Desire, due to its base amount of Energy Recharge. The goal is to get 200% Energy Recharge from all sources, whether weapons or artifacts.

As for artifacts, 2x The Exile set will give you 20% Energy Recharge, while 4 parts will additionally regenerate 2 Energy every 2 seconds, up to a maximum of 6 seconds for each party member, except the person equipped with them.

Talents are abilities that each character in the game uses. As for Bennet, you should focus on improving them in the right order:

In the case of building Bennet as a Support, it is not worth investing materials in upgrading the Normal Attack: Strike of Fortune skill, since you will mainly rely on his Burst Element and Skill Element.

As for Bennet's constellations, the more of them you have, the better. Bennet on C1 gets the requirements of his Elemental Burst removed (activating a specific effect depending on HP). It's still worth having Bennet on C2.

However, be careful not to break your character if you have 6 constellations, because Bennet then grants a Pyro effect to any character who fights with a spear, sword, or claymore. This can greatly mess up your builds, such as those that are based on Physical DMG (because then you will instead deal Pyro DMG).