On this page of the guide to Genshin Impact, you will learn all about Amber, the character with the Pyro element - what she is best suited for, how to build her best, and in which team she will have the greatest potential to perform her role. 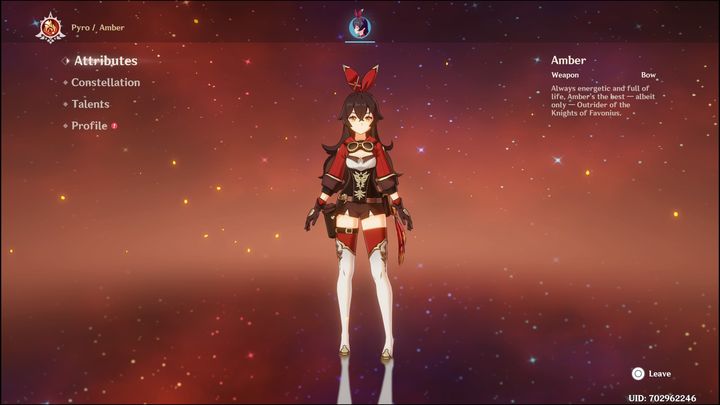 Amber is a four-star character who you will receive for free right at the start of the game. She fights with a bow. Even though she is considered one of the worst characters, the right build can make her a pretty good Sub DPS or Support.

As for Amber's abilities, they are best scaled with Pyro DMG and ATK DMG. Therefore, pay attention to these two statistics when choosing the right artifacts for her. If you want to rely on regular attacks, then you should think about artifacts with main and Physical DMG sub-stats.

If you want to focus on Amber and build her up as a Damage Dealer, it's worth looking into a build that relies on dealing physical damage from her basic attack.

Bloodstained Chivalry and Pale Flame will strengthen your physical damage by 25% each, so 50% in total which is a very good result. But when it comes to weapons, Thundering Pulse seems like the best option, because it strengthens the attack by 20-40%. In addition, by stacking your power, it can strengthen 12/24/40% - 24/48/80% of DMG. However, it is a 5-star weapon, difficult to obtain. Moreover, it is worth paying attention to the artifacts' main and sub stats. It is important to equip artifacts with ATK%/Physical DMG%/Crit Rate/Crit Damage. 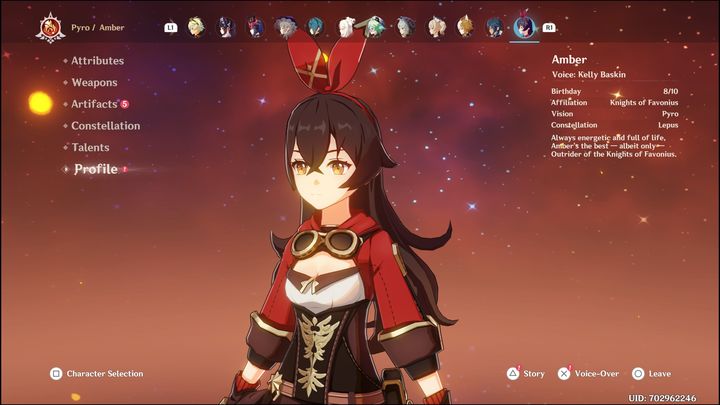 The four-star Rust bow is much better and easier to access weapon - it boosts basic attacks by 40-80% at the cost of charged attacks (10% less damage). However, this bow will be perfect for physical damage which focus mainly on the basic series of attacks.

However, if you are not at all lucky for getting weapons, you can use the three-star version of the bow - the Slingshot. If you deal damage to the target within 0.3 seconds since firing, you will get increased DMG by 36% - 60%. If not, you'll reduce it by 10%.

If you want to focus on Amber and build her up as a Support, it's worth focusing on Energy Recharge and Elemental Burst to help other characters as often as possible with your Elemental Burst, which needs little Energy to fully recharge.

Noblesse Oblige will work perfectly on Amber as Support due to Elemental Burst. Amber needs very little Energy to be able to use Elemental Burst, and with this set of artifacts, not only will you boost Elemental Burst's DMG by 20%, you'll also increase the ATK of all party members by 20% for 12 seconds (no stacking).

The best weapon for Amber as Support will be Elegy for the End. This weapon will greatly enhance Elemental Mastery (60-120/100-200) and ATK (20-40%) if you get one charge. Unfortunately, this weapon is difficult to obtain, as it is a five-star.

Favonius Warbow or The Stringless are much easier to obtain. The first of the bows gives you a 60-100% chance of generating an Elemental Particle that will regenerate 6 energy if you critically hit an enemy. The Stringless will increase Elemental Skill DMG and Elemental Burst DMG by 24-48%.

Talents are abilities that each character in the game uses. As for Amber, depending on the build, you should focus on upgrading them in the right order:

In the case of building Amber as a Support, it is not worth investing materials in upgrading the Normal Attack: Sharpshooter skill, since you will mainly rely on her Burst Element and Skill Element.

In the case of constellations, Amber gets quite an interesting buffs the moment you have her on C2, as you can then manually detonate your bait. However, if you want her to be a Support, it is worth having C3, due to the automatic upgrade of Fiery Rain (Elemental Burst) by 3 levels.