Read this chapter of the guide to Gears Tactics to learn all about fighting the final enemy of the first stage of the game. The first boss in the game is Brumak. A battle with this enemy takes place at the end of the last mission of the first act.

Brumak is a powerful opponent - this fight will be neither short nor easy. He is extremely resilient - you will have to use various tactics to defeat it. You can only destroy it by attacking the tank on its back. This opponent's health points are divided into 3 separate bars. You have to deplete all of them - extra damage doesn't go to the next bar. Brumak is quite mobile and uses all of its abilities in every turn if a target is in its range.

Brumak will fight your team in several ways: 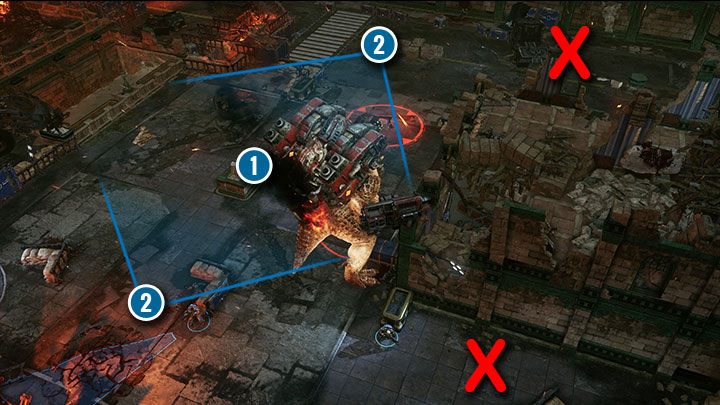 Try to keep Brumak in the center of the map (1) and your soldiers on opposite sides (2). Don't set your people in the narrow ends of the map (red "X" symbols). Your soldiers will have difficulty keeping distance.

You start the battle with your team divided into two groups set on both sides. Any attack on the tank will force Brumak to focus on the attacker. Ideally, Brumak would remain still in the middle of the map (1). Deploy soldiers on different sides of Brumak to alternately attack its tank from behind (2). The boss can perform up to 3 attacks in each turn. Its turns are unusual - the boss will always make a move and use a melee attack or shoot guns and rockets if he has the option. 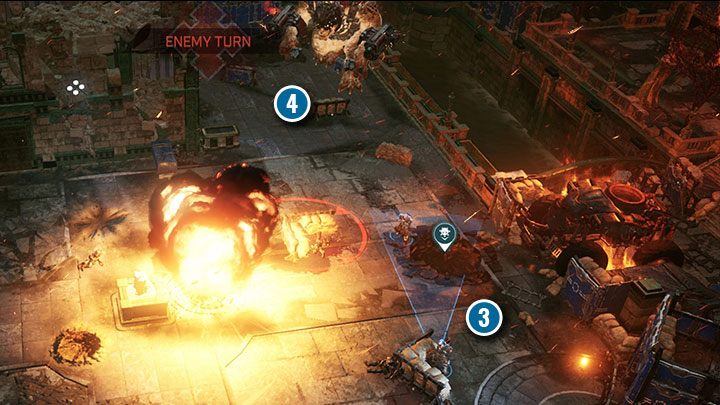 Enemy reinforcements will often appear on the map. If any e-holes appear (3), secure the place and use explosives to close it as soon as possible. Try to draw Brumak away from the corners of the map (4).

Try to keep your people in the open (3). Don't let the enemy corner you near the bridge. Brumak will quickly reach your soldiers and attack them with his paws (4). In places like this, you're going to have a hard time positioning your people properly. Avoid situations where you have three or four soldiers on one side and one or none on Brumak's other side. You will lose several turns to re-deploy the troops so that you can attack the enemy from behind. 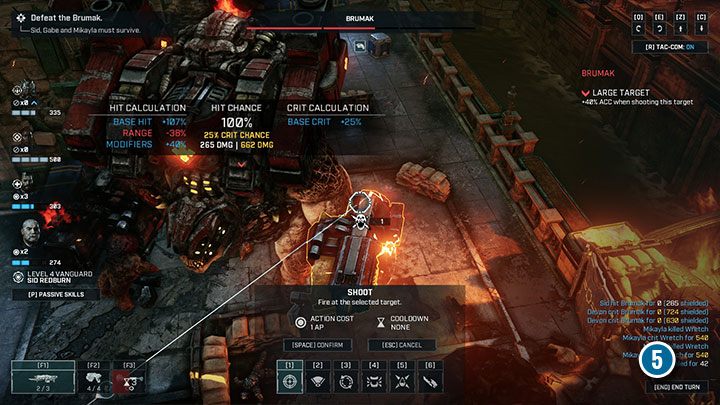 While attacking the boss, start by destroying the guns mounted on Brumak's arms. The boss won't be able to use them ever again. Guns remain active even when they have 1 health point left.

Start the battle by destroying the guns on the boss's arms (5). That way Brumak will pose less of a threat. Guns can wreak a lot of havoc and can injure a few of your soldiers if they are standing in one place. Disabling this weapon will deprive Brumak of two long-range attacks - this will make the battle much easier.

At the end of each turn, Brumak will perform an artillery attack using a rocket launcher. During your turn, you have time to escape this fire and avoid damage. It is best to divide the team into 2-3 smaller groups. If you deploy your soldiers on either side of the boss or in a triangle (with the boss in the middle), you will have an easier time attacking the tank and avoiding the missiles. In addition, you will be able to quickly eliminate the reinforcements that will appear every 1-2 turns. Your people will secure every part of the map and save action points by not moving. 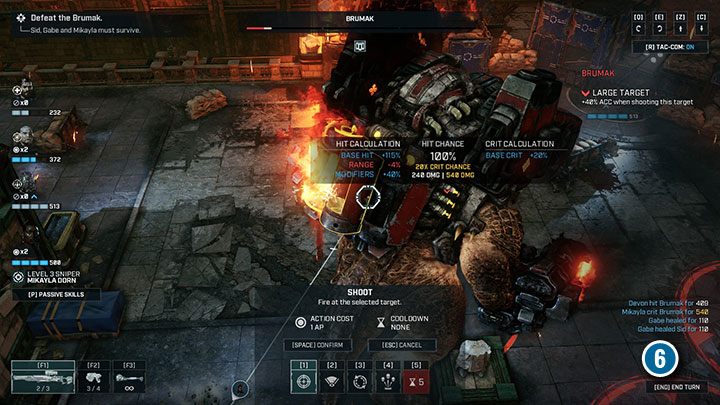 Attacks with a high critical hit chance deal the most damage. It's worth "saving" special abilities and using them on Brumak.

When attacking the tank, use skills that inflict additional damage or give you extra attacks (6) e.g. double shot. Characters who do not inflict too much damage, such as Support, Vanguard or Scout (must get close to attack), should focus on fighting regular enemies. To attack the boss, it is best to use the Heavy and Sniper classes. They have a large range of fire and bonuses for regular and critical damage. The best solution is to have soldiers with the same number of action points on both sides of Brumak. That way you can make the most of your team and beat the boss with ease.

This site is not associated with and/or endorsed by the Xbox Game Studios / Microsoft Studios or Splash Damage. All logos and images are copyrighted by their respective owners.