Football Manager 2020 is a very complex game that can be played in many different ways. Depending on which goals you want to achieve, you'll have to assume a certain direction and continue with it. For example, when leading a team from the bottom of the table, you'll have to work hard to overcome the crisis and end the season well. Deciding on a top team from the league, you will have to put up with increasing demands of the board of directors. No matter the choice, you'll have to put up with various problems: injuries, contracts, morale, players' trust or drastic cuts to the budget. This chapter offers some tips that should help you in decision making and solving problems stemming from daily life of the club in Football Manager 2020. 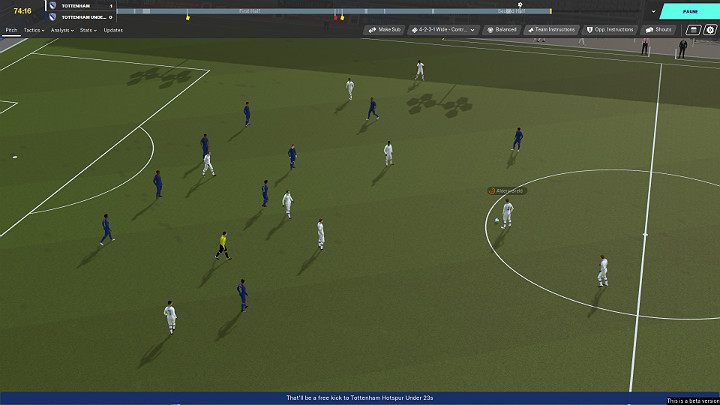 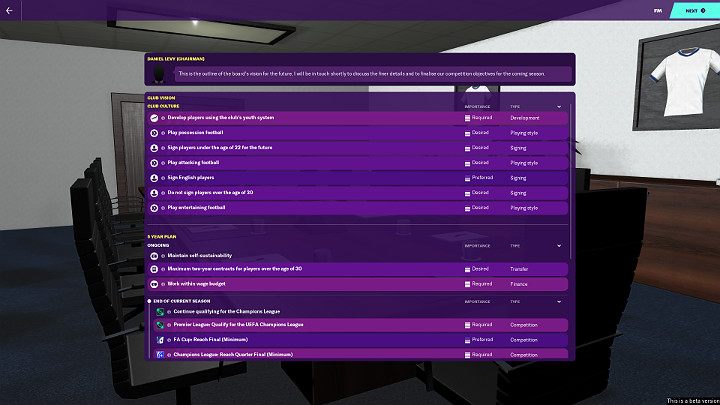 After taking over the position of the manager of the given club, the board will immediately send you their expectations. Depending on the team they will be less or more challenging. In case of weaker teams, your task will be e.g. to maintain your position in the league, but the best managers are expected to win a trophy. Aside from expectations of the board, you should create your own goals that will help you manage the team better. In Football Manager 2020, goals can be divided into short-term and long-term.

Short-term goals are those that can be achieved in the course of the given season. For example, a weaker team from the English Premier League, should reach at least round 2 in the English League Cup or at least round 3 in the FA Cup. The management of the best teams may expect you to win the FIFA Club World Cup or reach the semi-finals of the Champions League.

Long-term goals are those that can not be achieved in one season - their implementation takes up to 5 years. The manager of a weaker team will, for example, receive a goal to not exceed the salary budget. A player who decides to lead a very good team will have much more on his head: increase advertising revenue, expand the stadium, maintain the status of the most reputable club from the given league.

The world stadiums have many times seen upsets in which a team from the bottom of the table has won with a top squad - sometimes with even a few goals' difference. In Football Manager 2020, upsets can also happen, so you should treat every enemy with the same respect and commitment. Always keep in mind the fact that FM 20 is a computer game and anything can happen here.

Pay attention to the depth of the squad

It is impossible to win a League championship or a Cup based only on the initial eleven or basing your tactics on two players. Think what would happen if one of the players from the initial eleven has suffered an injury? Worse, it can happen that 2 or more players will suddenly be indisposed.

Take care of the right infrastructure

Given the fact that in Football Manager 2020, you will have to deal with various problems and injuries of players, it is worth having at least one good replacement for each position. Thanks to replacements, there will never be a situation where you cannot field a decent team for the next match.

The right tactics are the key to success 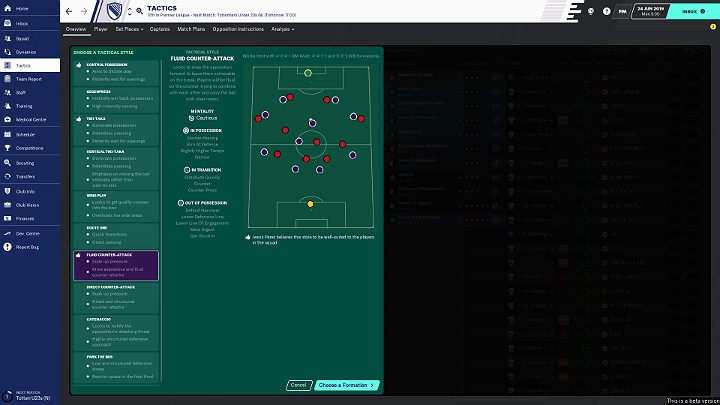 If you have taken up the position of Manager at a very good club, you can experiment with tactics and buy players who can meet your requirements. However, if you manage a small club and do not have the right budget, you need to find some solid players in your squad and put the weight of the game on their shoulders. In the meantime, try bringing new players to the club (e.g. loans) to strengthen the team in the shortest possible time and take the load from the existing pillars of the team.

Preparations before the match 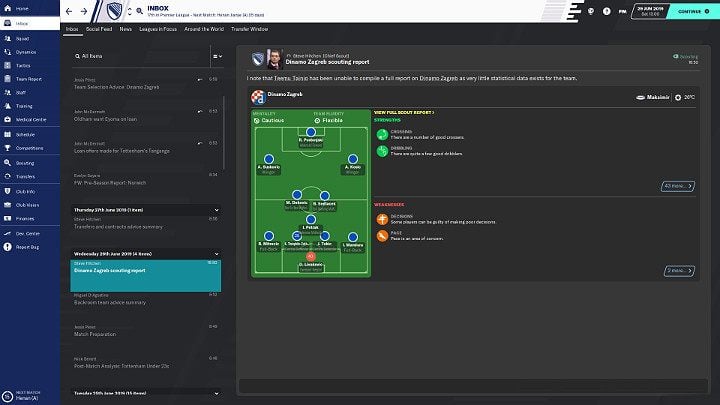 Each match requires preparations, as every team has its individual style of playing that has to be met with the right tactics. Whether you're playing with a clearly weaker team or the leader of the table, it's always worth spending some time analyzing Scout reports.

After reading the Scouts' report you'll receive all of the necessary data about the enemy team. With this knowledge, you can give specific instructions to the chosen players. For example, midfielders will pay attention to the better covering of the middle of the field.

A successful motivational speech can work wonders on players entering the field. Well-motivated players are more involved in the game, and this leads to better results obtained by the whole team. 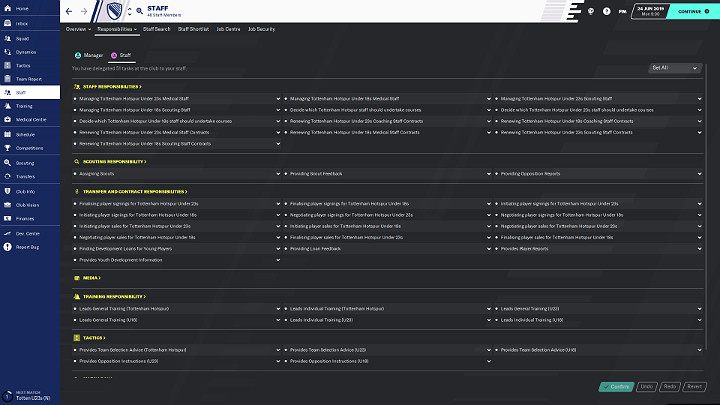 In Football Manager 2020 you do not have to make all decisions by yourself. Among the staff of the club you will find a number of specialists from each area who will gladly take on some of the responsibilities. Thus, you can focus on the most important aspects of team management, and assign the rest of the tasks to the appropriate employees.

What tasks should be delegated?

The decision which tasks should be performed by assistants, and which should be done by you should be made individually. For example, if scheduling workouts is a headache and your players are not prepared for the meetings awaiting them, consider hiring a reliable coach to take on that responsibility.

If you want to extend an existing contract, never accept the first offer that will be presented to you. Remember that the budget of the club is always stretched to the limit and you can not afford losing additional money. Initial offers are always excessive, but if you negotiate patiently, you will be able to talk down the price and the funds thus obtained can be spent on other purposes.

During the negotiations in the transfer market you've managed to acquire a few new players that are supposed to strengthen Your club. Congratulations! Now it's time to test them. Sparring is the best way to test new players before placing them in the main squad for the next match. 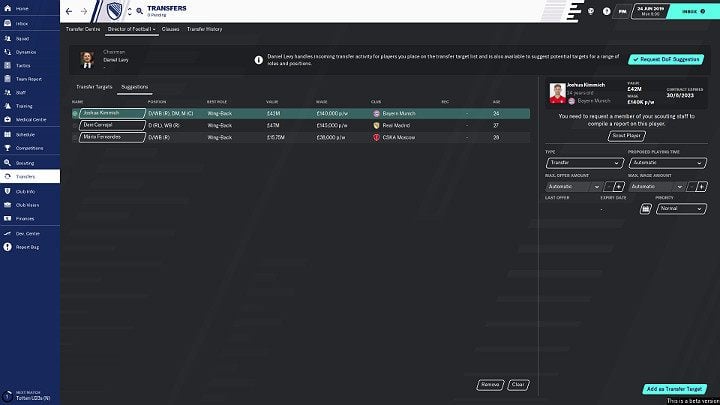 The transfer market is a place where you can gain a lot but also lose a lot. Every transaction must be thought through and properly executed. During the transfer window, try to buy only useful players and sell those who not meet Your style of playing.

Before you start spending club money or selling your players, think about what you want to achieve. Surely, don't attempt to engage in a total sale of your players or buy new players at random. Without proper planning, it may turn out that at the end of the transfer window your team consists of several midfielders, most of whom won't even play a single match. Remember that the players who don't play still get paid.

Look for opportunities in the transfer market

If your budget is really limited, look for bargains in the transfer market. Pay special attention to the players from the free transfer, and those whose contracts are ending. Remember that many such players don't even have an agent who will try to negotiate on their behalf, so you can get a good player for relatively low money.

Players at the end of their career

Players who are at the end of their careers may still have really good attributes and skills, and you can get them for little money. If the management does not impose restrictions on you e.g. you can only bring young players, it is recommended to bring one or two older but experienced players.

Every good Manager should track the progress of their players - this also applies to virtual courts of Football Manager 2020. Pay attention to how Your players behave during sparring and league matches. If a team has problems in a certain area of the field, it is a sign that you need to change something in your tactics to improve the smoothness of the game. 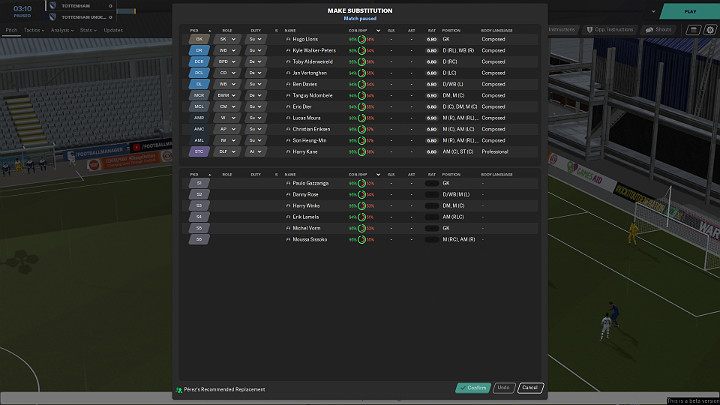 Don't be afraid to pull the best players out of the pitch if they don't live up to your expectations and put reserve players in their place who can positively impact the whole team's play.

Before accepting the goals received from the management, think about whether you'll be able to complete them. Remember that on their basis Your work will be evaluated, and in case of failure can lead to dismissal even in the middle of the season. If you think the management goals are too exorbitant, you can always negotiate with them.

This may come as a surprise to new Players, but the Football Manager series suffers from licensing flaws so FM 20 contains many false player and club names, trophies and many other names. Moreover, don't bother to look for real portraits of players, coaches, or assistants. Fortunately, this problem can be solved easily!

The file with the real names of the clubs and coats of arms can be downloaded at this address: "https://www.fmscout.com/a-fm20-real-names-license-fix.html". To install the package, follow the provided instructions. The whole operation takes a few minutes and requires you to delete/add a few files.

The file with the real portraits of the players, coaches, assistants, etc. can be downloaded at this address: "https://df11faces.com/Megapack". Installing this package is much easier than the one containing real club names, so you should handle it easily. The file comes with a corresponding instruction that presents the entire installation process step by step.