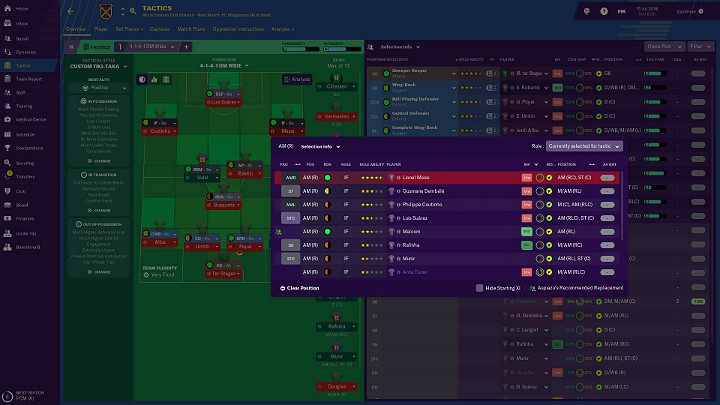 Tactics is an extremely important part of Football Manager 2019. Your success on the field depends mainly on your tactics. Many factors influence the choice of appropriate tactics, such as formation and players positions, commands for the team, individual instructions for individual team members, selection of executors of set pieces and the selection of the appropriate team captain. In this chapter you will find numerous information and tips to help you choose the right tactics in Football Manager 2019.

Choosing a formation and player positions

The first and extremely important element of tactics is the selection of the right formation for your team's playing style. After taking the position of Manager, you can choose the formation (or even set 3 completely different) from several pre-made sets, which you can then modify in any way you see fit. To make changes in the formation, simply drag a player to your preferred position, assigning him a new role. In this way you can freely rearrange the players, but try to be careful, and avoid a situation, in which a defender is assigned the position of an attacker and vice versa. Remember that after choosing a new formation, your players will need some time adjusting to the new tactics. Considering the fact that you definitely want your players to complete their tactical goals and understand each other on the field, include this element in your team training. What is very important, each change information reduces the knowledge of a given tactics, so try to avoid frequent changes and stick to a maximum of 2 - 3 formations. It should also be noted that losing one or two matches does not mean that you have to change the formation immediately and completely re-model the play style of the whole team. You need to wait a few games before you see your desired results.

Which formation to choose?

The choice of formation should primarily depend on the team you are managing. First of all, take some time to get to know the players with whom you will work and try to select the few top players, which will form the basis of your tactics later on. Also pay attention to the depth of the composition because if you have a shortage of attackers (you have only 2 such players) it will be difficult to create a 4-3-3 formation. For example, if you have some great defenders and midfielders at your club, you can choose a formation that will focus on playing the ball in the middle of the field with one forward striker, such as 4-2-3-1. In this setting you'll need to have four defenders, two defensive midfielders, three offensive midfielders and one attacker running behind the backs of opponent's defenders.

If you have chosen the right formation for your team, it's worth considering what role the individual players will take. For example, two side defenders can take on completely different roles while playing on the same position. Everything depends on your choice of tactics and players' traits. Setting an appropriate role for a player is an important task due to the fact that it defines the behavior of a given player on the field. Returning to the example of side defenders - one of them can join offensive actions, and the other, due to the lack of appropriate traits, can only deal with defense. To choose a role for a player, click on the bar under the his shirt, and then select the appropriate role from the menu.

Instructions for the team are a series of orders that will be implemented during the match by your players. You can choose your preferred style of play when choosing the team's commands, however, you must pay attention to the fact that some options exclude the possibility of choosing others. For example, attack with the center of the field blocks the possibility of attacking on sides.

Depending on your chosen play style, your players will behave differently on the field. A rigid formation results in the players sticking to their tasks and not joining in the tasks of other units, so the defenders will be responsible only for the defense, midfielders only for support and attackers only for the attack. In the case of a smooth play style, players have more freedom on the field and will engage in more phases of the game, such as side defenders joining offensive actions at the side line. With this style of play, your team will move much smoother, which can contribute to more accurate execution of passes and moving to the opponent's penalty area. It should be remembered, however, that the fluidity of the game depends on the players' abilities and less-trained players will be unable to cope with such a task.

In addition to team instructions, Football Manager 2019 gives you the option to issue commands to individual team members playing in a specific position. You can do this by going to the tactics tab and selecting the players option. In this tab you can assign appropriate tasks to players based on their attributes. 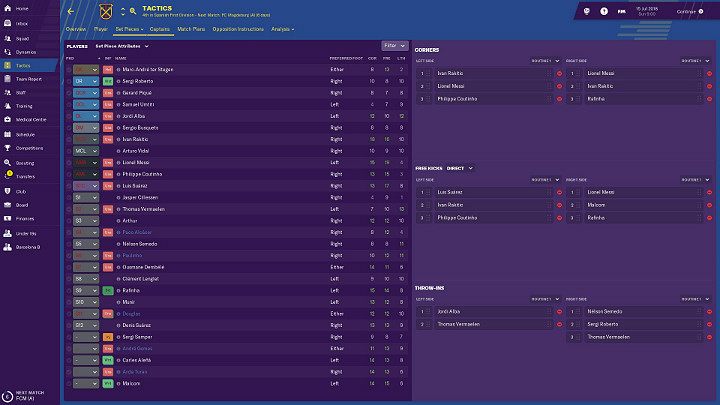 Set pieces are an important element of tactics used by many clubs. In your team you can have players who are experts in free kicks, which can contribute to scoring more goals. Set pieces can be divided depending on the side of the field from which they are executed and the scenario (defense or attack). Remember to assign players who have properly developed traits in terms of cross-barring and shooting to execute specific patterns. When executing corner kicks, it's also worth paying attention to the player's leading leg. The player's stronger leg determines whether he will curve the ball towards the goal or play the ball away from the goal. Your players are closely watched by the coaches and if any of them is not suitable for e.g. throws-in, you will be informed immediately.

Choosing the right captain is a decision you will have to make before the start of the season. The main task of the captain is to motivate the players on the field. The position can also be described as a role model for team mates. Moreover, the team captain is a kind of intermediary between the team and the manager. In case of any problems in the club, you can ask the captain about the team's morale and ask them to talk to individual players.