Football Manager 2019 can be a bit overwhelmed by the amount of information, tables, diagrams and functions. It will be particularly difficult for completely new players to adapt, so we've prepared a list of steps to take at the beginning of a manager's career in order to start the season with a good start. The player will find all the important information and advice that contribute to the development of his club and may enable him to fight for trophies later on.

Create your own Manager Profile 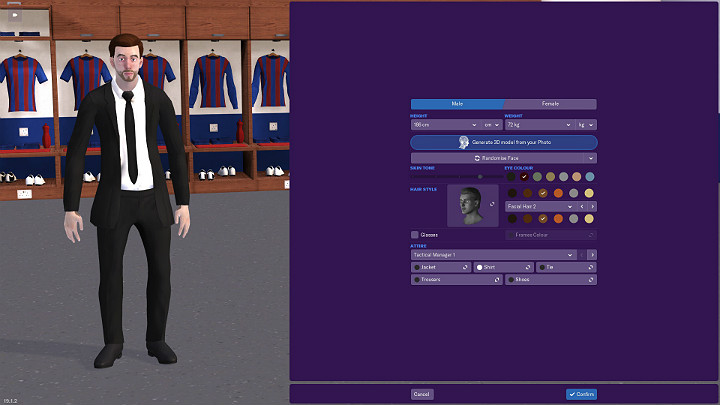 The first and very important thing when you turn Football Manager 2019 on is to create a manager profile. The player has the ability to personalize the look of the Manager and add some information to the profile, such as: personal data, age, favourite football teams, experience, etc.

Watch out for the data you are completing

Some of the data you provide may be used against you during interviews and press conferences. For example, your favorite football teams. If you enter one or more of your favorite teams in the manager's profile and then start leading a completely different team, journalists may be very interested in "why?". 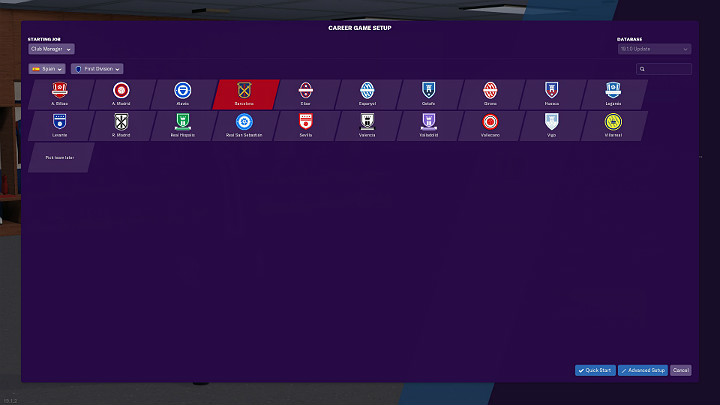 The next step at the beginning of your career in Football Manager 2019 is the selection of league games. When choosing a league, you can choose from your own preferences and decide on games where your favorite team is playing. You can also go deeper into a more serious analysis of all the leagues available in the game and decide on games in which you will meet a wide range of game styles, which represent teams from top European leagues, for example.

Worse or better league for the start?

If you decide to choose the best leagues you can lead the top teams, which are characterized by significant skills so that you will be able to perform fixed tactics. You will also have a much bigger budget at your disposal. However, if you decide to lead weaker team from the 2nd or 3rd league you have to be prepared for a challenge because the players playing in such teams will not be able to perform your commands correctly, at least at the beginning of the game. 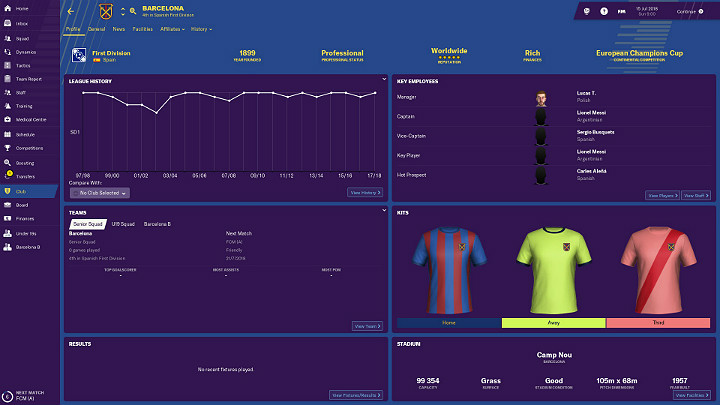 After choosing a league, it will be the time to find the team that suits you best. When choosing a team, it is worth considering which one will be able to achieve your goals.

Best team in a league or a mediocre one?

By choosing the best team in the league from the very beginning you will have players who let you to implement a wide range of tactics. In such a club you will find players of highest class, who have the highest attributes. However, you have to take into account the fact that theoretically you will not have many solid rivals during the league matches. On the other hand, if you take on the role of Team Manager from the middle of the table, you will have a little more room to show off. You won't have everything given as a tray, but you still have a few solid players at your disposal on which you can base your tactics. Leading such a team will require more work, but it also gives you a lot of satisfaction. 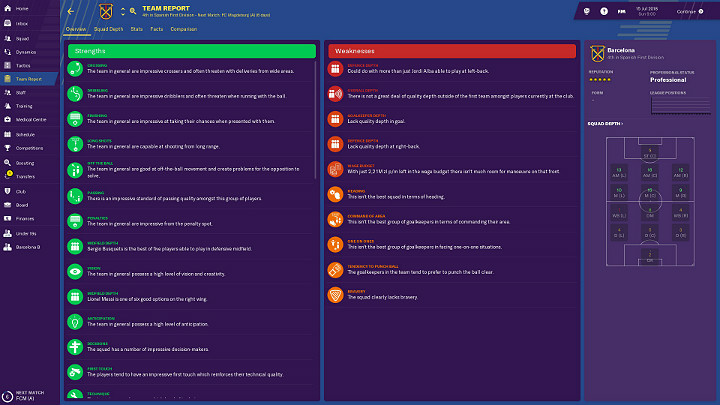 Once you've accepted the position of a manager in a club, it's worth spending some time getting to know the club's history, preferred style of play, goals to achieve, strengths and weaknesses, and so on. It's also worth getting to know the players you'll have to work with. Getting to know the team in depth will surely translate into a better work in the club.

From the Strengths and Weaknesses report you can deduce how to lead a team and what aspects to focus on when setting tactics. If, for example, your team plays great "head" play and makes good free kicks, it is worth paying attention to performing a large number of crossings in the penalty area and searching for fixed fragments of the game while setting up the tactics. If your team's weak points are flanks, it's worth betting on playing with the ball in the middle of the pitch. There are a lot of possibilities and depending on which team you have chosen, the tactical assumptions for each club will be completely different.

Your team in comparison to other teams from the league 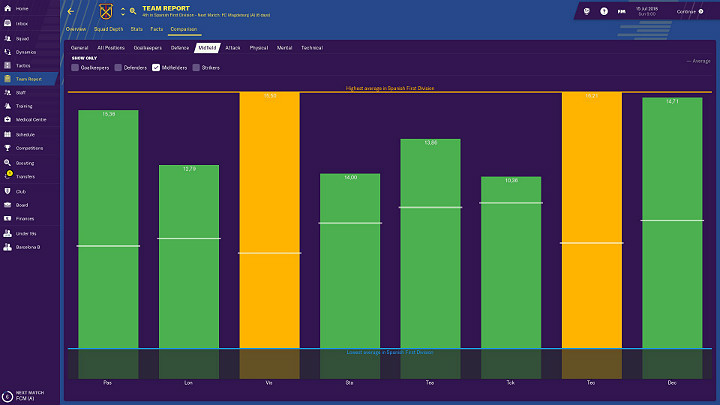 In this report you can find a lot of really important information that will allow you to establish the facts about how your team performs compared to other teams in the league in terms of individual statistics. The information you read from these reports will allow you to focus on the most important aspects of the game and strengthen those areas that require your intervention. For example, if your team does not have the best defensive play using head passes, you must take into account the fact that the opponent may try to cross your defensive line with long and high passes. In this case, it's a good idea to consider moving the defensive line a little backwards. If your assist line looks extremely good and your players have passes, technique, shots, ball receiving - all of those above-average it's a good idea to base your tactics on them. 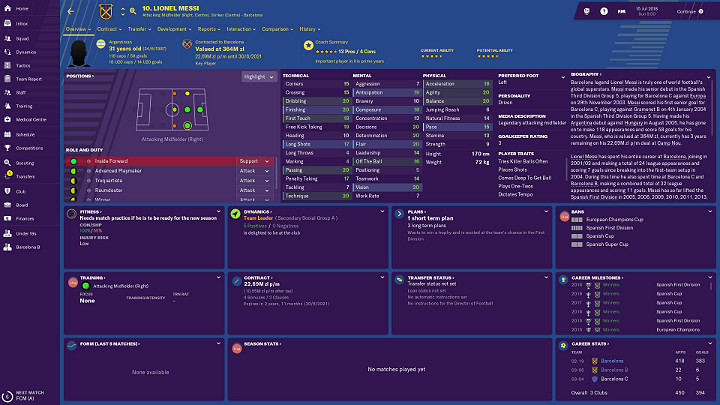 After reading the general report about the team, you should get to know the players who will try to follow your instructions on the pitch. Pay special attention to the attributes of the player, which determine his skills. Equally important are their roles that they can play on the pitch and their favorite games.

Learn abilities of your players

A player's attributes reflect his skills. By checking information about a player you will be able to determine whether they will be good players for your team. For example, when looking for central defenders, you must pay attention to attributes such as height, jump, speed, but also to the reception and withdrawal of the ball. Thanks to this you will be sure that such a player can perform well as a defender and is ready to quickly get the ball out after taking it over.

Some players have only one domain role and will not be suitable for any other position. Another group of players are versatile players, who will perform well both as an offensive and defensive midfielder.

All the players who play in your club have a certain range of favorite games. Some of them have a lot of those, others just one or two. For example, if a side defender likes to join offensive actions, playing on the line and attacking with the ball on the right side of the pitch will be an ideal option for him to overtake weaker rivals. In such a match you can give this player more freedom, but if it comes to a high stakes match, it's worth considering a certain regime that will force players to play with designed tactics.

Check the "preferred leg" of a player

Most professional players from the strongest clubs can play with both legs, which is their great advantage. Unfortunately, among the weaker teams you will find players who can only play with one foot. You have to pay attention to this when setting up players on a given position. For example, an offensive midfielder able to play with both legs, who likes to go down to the center of the field from both flanks, will be an extremely effective player and may be able to shoot at the goal box from any position. 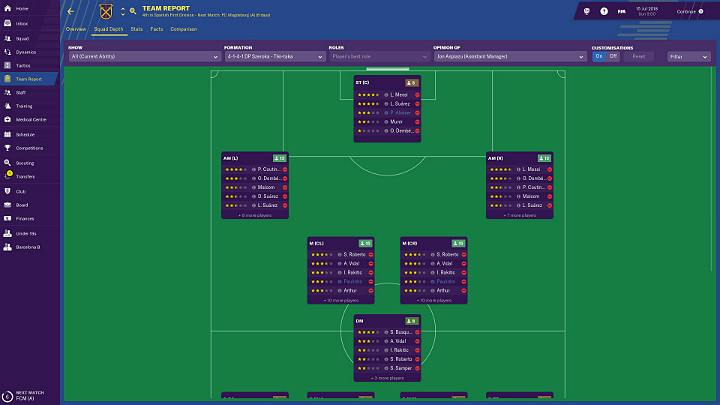 In this tab you can see how many players in the club can play on a specific position. You can use this data for the later tactics, the first eleven and for the selection of reserve players. If a role on the pitch is not adequately staffed, it is worth considering looking for a suitable player on the transfer market to strengthen this aspect.

Don't buy too many players for a specific position

Try not to buy too many players for each area of football pitch because you will not be able to use them all. Try to buy players who will be able to strengthen the weakest aspect of your team right from the start. 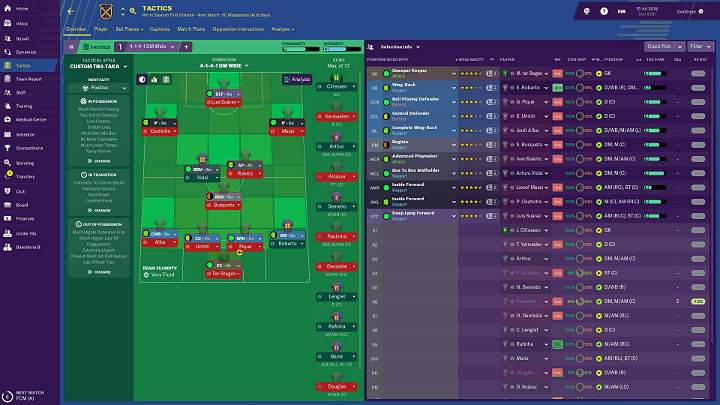 Tactics are a key element of Football Manager 2019, and it's the correct setting is the main factor that will determine the performance of your players. It's worth taking the time to refine your tactics before the first match, so that the beginning of your managerial career doesn't start with such a painful defeat.

How many tactics you should prepare?

Football Manager 2019 allows the player to set up to 3 tactics that can be freely changed and modified. Depending on which style of play you prefer, you may be tempted to prepare 3 tactics, such as:

Of course you can only stay with one main tactic and modify it before each game.

What is important while selecting tactics?

When setting tactics, you should take into account all previous information you've obtained when viewing team reports, learning about their strengths and weaknesses. A good knowledge of the depth of the line-up and the players themselves will also contribute to the correct tactics setting.