NDB stations are the simplest navaids, which inform us only about the aircraft location in relation to the NDB without any information about distance. Navigation is based on flying from one NDB station to another and the information abort reaching the NDB is acquired by change in the ADF (Advanced Direction Finder) gauge indication - the arrow flips downwards. 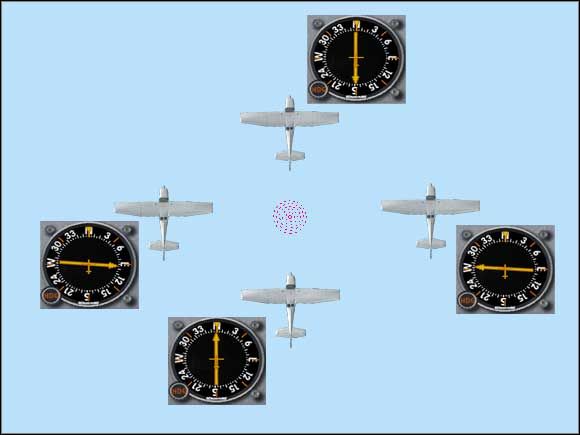 ADF gauge indication - aircraft location in relation to the NDB.

As we can see, the ADF shows only the direction to the tuned NDB station.

VOR stations are more precise navaid than the NDBs, because their signal is enhanced with magnetic north orientation which makes it possible to fly along radials, "rays" going out of the station in all directions. Thanks to it we can plan our route, i.e. fly along the given radial or fly towards the VOR from a given side. 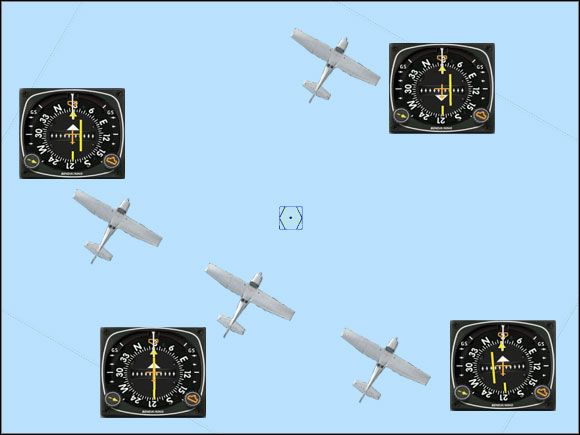 In the upper right part we have a situation, where the aircraft has already passed the VOR - the white triangle points the opposite way. Additionally it's to the left from the radial 30. Yes, it's already radial 30, because that's the direction of the "ray" coming off the VOR station.

VOR navigation is based mainly on flying along radials and intercepting them.

VOR/DME is the VOR station equipped with a DME (Distance Measuring Equipment) system which always shows us the current distance to the tuned VOR. The information is shown on the DME display.

VOR/DME stations are the most popular navaids around the world.

ILS system is based on VOR station (or VOR/DME) and its task is to help pilots during landings by guiding the aircraft along the optimal descent path. ILS system consists of:

a) localizer - the outward horizontal beam which helps align the aircraft with the runway;

b) glide slope - vertical beam that helps keep the aircraft on an optimal descent path;

c) markers - three specific stations (The Outer Marker, the Middle Marker and the Inner Marker), set in front of the runway, which are an additional information about the distance from the threshold. 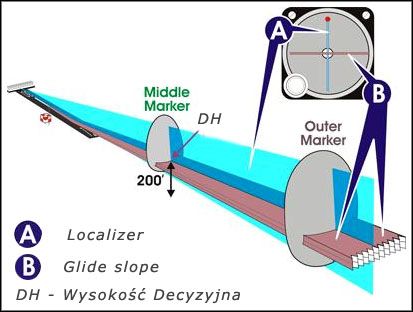 Radio beams of the ILS system.

As we can see, the localizer and the glideslope form a cross. The middle of that cross is the path the aircraft should follow to land right behind the runway threshold.

Decision height is the altitude on which we make a decision whether to continue landing or abort it. The DH can be found on airport approach charts, but if we use the ILS system, the most common DH is 200 feet above the ground level.

One of the most useful gauges used in navigation is the HSI (Horizontal Situation Indicator). Here are three exemplary situations:

As we can see, the runway centerline is symbolized by the course arrow. If the middle section deflects to the right, then the runway is to the right. Small yellow triangles on both sides of the HSI indicate the glideslope. If they drop below the center of the gauge, the glideslope is below us.

GPS navigation is based on the satellite network around the globe. To navigate, we need a GPS receiver which gets information from 4 satellites and therefore is capable of calculating our position, heading and speed.

In Flight Simulator, there is an additional GPS panel which is called by pressing the Shift + 3 keys.

This site is not associated with and/or endorsed by the Microsoft or Aces Studio. All logos and images are copyrighted by their respective owners.