In order to take-off we push the throttle all the way in. The aircraft begins to accelerate and when the speed reaches 70 knots, we pull the yoke (the stick) begin to climb. At positive rate of climb, raise the landing gear and accelerate to 90 knots. Then raise the flaps and keep on climbing.

Now we can switch on the autopilot. Open the radio panel and set our altitude (ALT) to 6000 feet (such altitude was indicated when we requested the flight clearance), press the ALT button and set the vertical speed (VS) to 1000 feet per minute. The autopilot itself is turned on by pressing the AP button. If heading was not set earlier, then set it to 255 using the knob and press the HDG button. 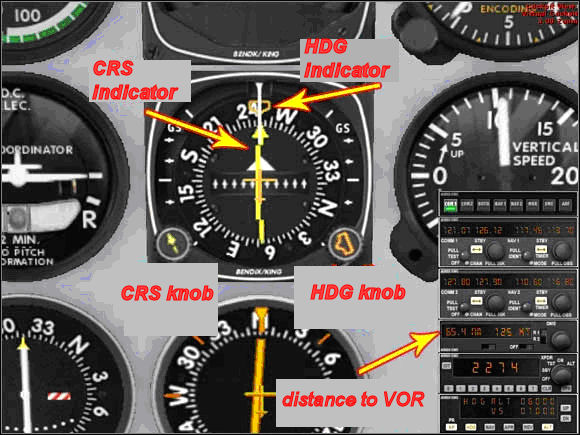 We can immediately tune the OTA VOR frequency (117.45) as shown above. The indicated distance to the VOR is 65,4 nm. Now rotate the course knob to achieve a solid white line and to flip the small white triangle upwards. We will begin to intercept that VOR as soon as the distance is reduced to 50 nm.

The course informs us about the aircraft location in relation to the VOR. Let's imagine a line connecting the aircraft with the VOR. The azimuth of the line (looking from the VOR) is called the outbound radial. If we add 180 degrees, we receive the inbound radial.

The indications shown above inform us that we fly the 250-degree heading. The course is also set to 250 degrees, the white triangle points upwards and the arrow is almost solid. It means we fly TO the VOR on outbound 250-degree radial, which is the inbound 70-degree radial (250 degrees +/- 180 degrees is 70 degrees). To be more precise, we fly a little bit to the right from the radial, as the middle section of the arrow is moved to the left and doesn't touch the end and the head of the arrow.

This site is not associated with and/or endorsed by the Microsoft or Aces Studio. All logos and images are copyrighted by their respective owners.