In his part of Final Fantasy works character development system called License Board - it's a bit similar to the Sphere Grind known from FFX. While this one may give more freedom in choosing the next skill to learn it has small influence on the character development itself. What I mean is that among the licenses you won't find e.g. Strength +4 or Speed +3. Licenses apply only to skills and equipment letting you wear certain armor or use a certain spell. There are also passive skills, but they only rise e.g. chance of blocking with a shield or shorten the time needed to make an action. You buy licenses with License Points (LP) which you get along with experience (EXP) points and the Hunter Points after killing an enemy. You start with an empty board. Every time you buy a license a new licenses appear side by side to the one you just bought. This means that you cannot buy a license from any part of the board - to get somewhere you first got to build a path leading there.

Don't buy licenses on weapons, armor, accessories, technicks and magicks unless you have the thing (or you know that you'll have it soon) - those LP use to buy licenses on passive skills.

And the passive attributes like strength, defense, magick power etc. your characters gain with every level and they also are addend by a certain piece of garment. The maximum value of one factor is 99.

In the game you'll gain enough LP to fully fill the whole License Board of every character, but you won't have access to everything from the beginning. I recommend assigning a certain role to every character, which they'll play till they all master their boards.

This is my recommendation. Of course you may do as you wish - I do not impose anything. 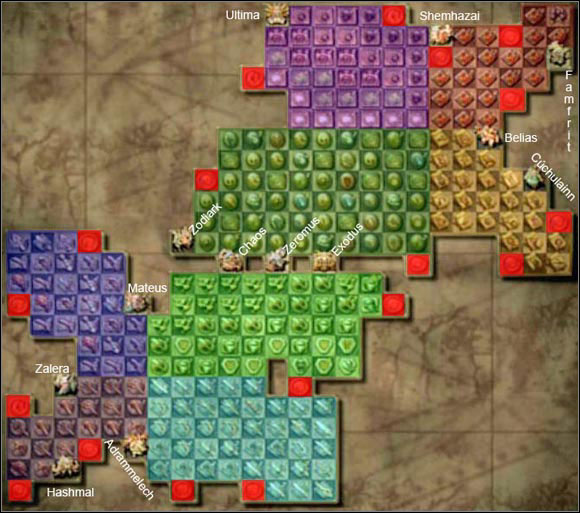 Above you can see the complete License Board.

The red point scattered on the board are quickenings. Each character may have the maximum of three and when she has all three the rest will disappear from the board.

The unpainted and labeled fields are Espers. They appear after you defeat the Esper taking the specific field.