Entrance to Pharos catacombs is possible after defeating Cid on it's peak. It just means that you can't enter at the first time when you visit this place. Before you will go there make sure that you are able to easily beat monsters which can be found there. You can be sure of a lot of struggles. In a hall you are being attacked by monsters constantly (type of monsters depends on a floor which you explore).

Moreover, the mini-map doesn't work in the catacombs, ordinary map is much limited and in chambers a deep darkness is spreading.

At Pharos's first floor use Dais of Ascendance to get to Penumbra. Then in order to get to lower floors you have to place the proper amount of Black Orbs in four altars - Pedestals of Night (details below). What is more, with every Black Orb placed in the proper altar it will become brighten in that chamber. System is the same as at first floor of Pharos, however except for finding Orbs in rivals' corpses you may find Massive Black Orb which equals three normal orbs + all which you didn't manage to collect while fighting enemies.

On maps below rooms maybe are not proportional but it plays its role. I mean they show connections between rooms and overall shape. In red I marked invisible areas so I couldn't use this color to mark Fool's Facade (as in chapter "Part III - Pharos at Ridorana"). They are marked in blue now. 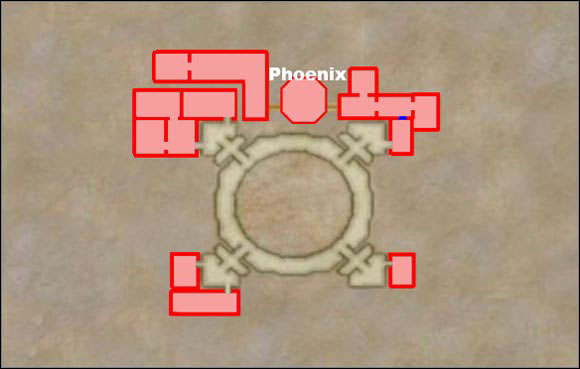 At this floor in the hall you will be attacked by Mistmares, Abaddons and Bull Abaddons. Other monsters are in chambers around the hall.

At this floor you can find also additional boss: Phoenix (look chapter: "Bosses not connected with the plot").

Amount of Black Orbs needed at this level:

After using proper amount of black crystals on every altar listed, in Dais of Ascendance an option "Umbra" will appear. 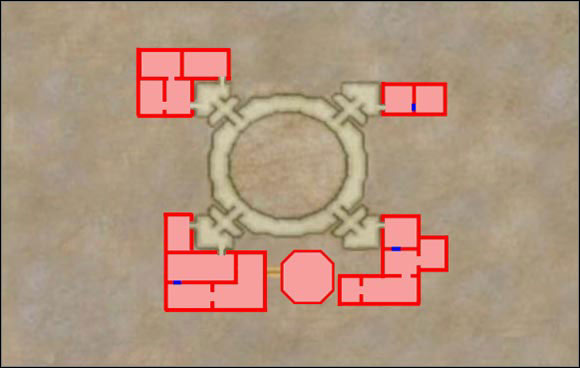 In Umbra's corridors you are being attacked by Mistamary and Dead Boneses. Other monsters occur only in chambers.

Amount of Black Orbs needed at this level:

After using proper amount of black crystals on every altar listed, in Dais of Ascendance an option "Abyssal" will appear. 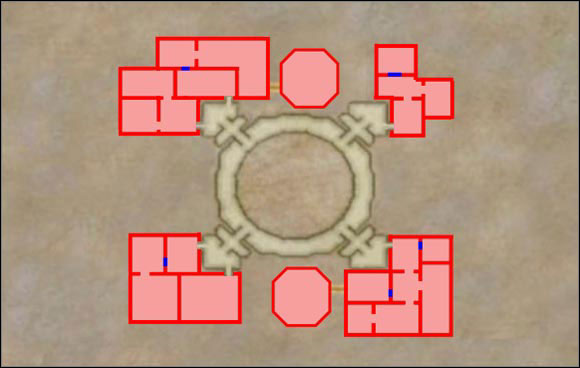 In the corridor of this floor you are being attacked by Necrofiends, Dead Bones and Warlock Zombies. Unlike previous floors you won't see them marching towards you. They come out of the ground when you come closer to them.

Actually it is last floor of Pharos. You can go lower but only to make an exclusive quest for the clan: "The Seer (rank VI)". Later, there is no possibility of going there.

In order to go to the lowest floor you gotta place right amount of Black Orbs needed in four altars for the last time:

After using proper amount of black crystals on every altar listed, in Dais of Ascendance an option "Unknown" will appear (If mission "The Seer" for the Centurio's clan is in progress).