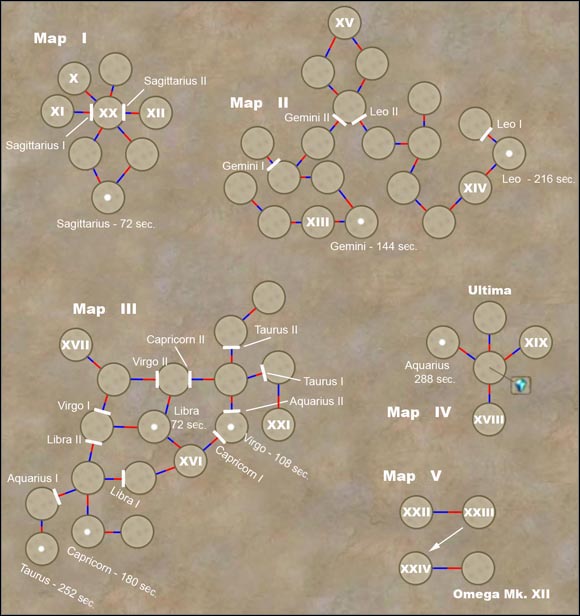 It's the same crystal you visited on your way for Treaty-blade but access to higher areas was denied (Scorpio Gate Stone didn't work). Now, when you posses Treaty-blade, you can reach higher floors, but make sure that you are ready for things that wait for you there. If so, open the Scorpio gate and use the portal IX to get to higher floors.

Map here, comparing to the one from lower levels is less colorful. The moving itself around this part of crystal is more difficult. One mechanism can open one of two gates - it depends on you which one. After activating you have defined amount of time to get to the chosen gate and to open it. On the map it's showed in that way: device is marked with a white dot and next to it is the name of that device and time which you have to get to the gate (e.g. Taurus 252 sec. - device named Taurus gives you 252 seconds to get to the one of its gates), and gates which are opened by that device are marked as lines crossing paths and there is a name of the device and roman number I or II (e.g. Taurus II - second of two gates that can be opened by Taurus).

The main reason of getting here is esper Ultima and additional boss Omega Mark XII.